Abstract
The case history of a liver transplant recipient is presented, who presented with acute dyspnoea after an innocuous fall. His early management was complicated and he was eventually diagnosed with malignant mesothelioma. This is the first such case report in the literature.

Introduction
Liver transplants have taken place in Ireland since 1993, with 889 transplants prior to January 1st 2015. Transplant recipients are surviving longer with improving therapeutic options and better immunosuppression. The link between previous solid organ transplantation, subsequent immunosuppression and the development of cancer has been well documented and is an important consideration in these patient’s follow up. Previously reported after lung and kidney transplants, mesothelioma has never been reported after liver transplantation.

Case Report
A 49 year old gentleman underwent orthotopic liver transplantation (OLT) in February 2013 for decompensated cirrhosis secondary to a combination of alcohol excess and Hepatitis C infection. He was a former IV drug user enrolled on a methadone program and at the time of transplantation had been abstinent from alcohol for 11 years. He worked as a commercial diver but neither he nor his family had any known asbestos exposure and his only travel history was between North America and Europe. His post-operative course was uncomplicated and post-transplant immunosuppression included tacrolimus, mycophenolate mofetil and prednisolone initially, followed by tacrolimus monotherapy, which achieved adequate control. He was followed routinely in the OLT clinic and had no major issues in the intervening period. He presented in August 2014 in severe respiratory distress after a one day history of progressive dyspnoea. There was no associated cough or fever but he reported having stumbled against a table the previous day, after which his symptoms started. Chest X-ray on admission showed a massive pleural effusion, obliterating his right lung field. Diagnostic pleural tap revealed haemorrhagic exudative pleural fluid, cytological examination of which was negative for malignancy. CT Thorax showed a right sided pleural effusion with collapse and pleural thickening at the lung base which was initially believed to be an inflammatory response, Figure 1. 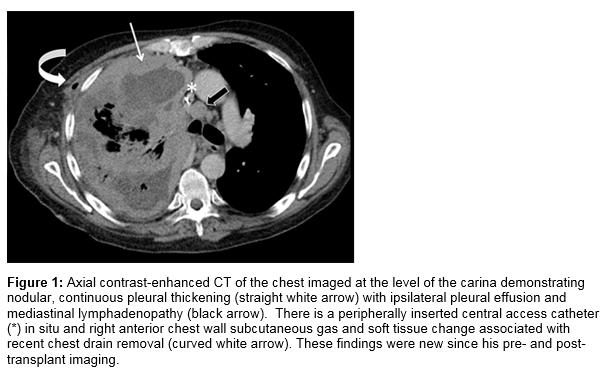 He improved following insertion of a pleural drain, after requiring multiple blood transfusions, dialysis, intubation and ventilatory support in the Intensive Care Unit, and was transferred to the ward. He subsequently deteriorated again a day later however and chest X-ray showed the pleural effusion had reaccumulated. A large bore chest drain was inserted as an emergency procedure and revealed bloodstained fluid. Again, no malignant cells were seen on cytology. Immunohistochemistry performed for CMV was negative. PAS and ZN stains were negative for microorganisms. Video-assisted thoracoscopic surgery (VATS) was subsequently carried out and pleural biopsies were taken.

Histologic examination of the pleural biopsy showed infiltration of pleural tissue by sheets of large pleomorphic malignant cells with vesicular chromatin, large nucleoli, and moderate to abundant eosinophilic cytoplasm, Figure 2. No glandular differentiation was evident and the tumour cells were positive for WT-1 and calretinin in keeping with a mesothelial origin, and a diagnosis of malignant mesothelioma was made. Lymphovascular invasion was present and a hilar lymph node showed evidence of metastatic disease, staging him as T4N1M0. He was not considered fit for any surgery or chemotherapy and a palliative approach was taken. He subsequently passed away a week later. 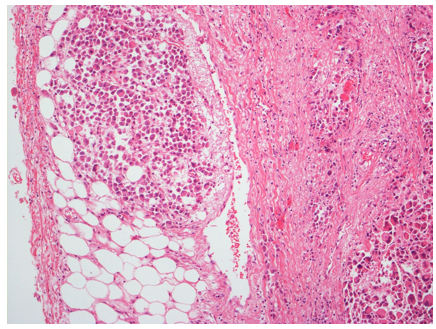 Figure 2:  Pleural biopsy as seen under low power light microscopy with H&E staining, which demonstrates the pleural surface of the lung with invasive tumour present. The tumour cells were positive for WT-1 and calretinin, in keeping with their mesothelial origin.

Discussion
Malignant pleural mesothelioma is a rare condition (prevalence 4.1 per 100 0001),but a case presenting in the absence of asbestos exposure in a patient younger than 50 years of age is extremely rare and the classic radiological features of asbestos were absent, raising the question of other aetiological factors. The increased incidence of de novo tumours in patients post solid organ transplantation has been well documented2. A large population-based study of U.S. transplant recipients showed a two-fold increased risk of cancer3. A case of mesothelioma after lung transplantation in the native lung of a 63 year old patient without prior asbestos exposure has been reported4 and 4 cases of mesothelioma were noted in a review of renal transplant recipients5. Ionizing radiation was briefly considered as an aetiological differential but immunosuppression was deemed the more likely causative factor. Despite extensive literature review including PubMed and CINAHL searches, no reported cases of mesothelioma post liver transplantation were identified, making this case the first reported of its kind. Previous liver transplantation, and subsequent immunosuppression, most likely enhanced our patient’s susceptibility to mesothelioma.