We report a case of Type 1 autoimmune pancreatitis presenting as a rare cause of worsening hyperglycaemia in a patient with Type 2 diabetes and discuss the difficulties in differentiating this disease from pancreatic cancer.

Introduction:
Autoimmune pancreatitis (AIP) was first described in 1961 and accounts for 5-6% of cases of chronic pancreatitis, though the prevalence is increasing with increasing awareness of the disease1,2. There are two types of autoimmune pancreatitis with different clinical and pathological features. Type 1 AIP is an IgG4 related disease and tends to occur in elderly patients in the 7th decade, with a male preponderance3. Type 1 AIP is associated with other organ involvement and commonly affects the biliary system3. In contrast, Type 2 AIP occurs in patients in the 5th-6th decade of life and other organ involvement is uncommon3. Both types of AIP respond well to steroids with reported remission rates of 99% and 92% for Type 1 and Type 2 AIP respectively4.

Case report:
A 69-year-old man was referred to the diabetes clinic with poor glycaemic control despite escalation of oral hypoglycaemic therapy. He had been diagnosed with Type 2 diabetes mellitus (T2DM) 1 year previously, having presented with polyuria, one stone weight loss and a HbA1c of 12%. His past medical history included asthma, benign prostatic hypertrophy, treated hypertension, B12 deficiency and gallstone cholecystitis. At presentation to the diabetes clinic, his BMI was 24kg/m2 with a HbA1c of 8.1% on Gliclazide 120mg daily and Pioglitazone 15mg daily. A previous trial of Metformin and Saxagliptin had been ineffective at lowering blood glucose levels. He was commenced on Insulin Detemir once daily to optimise diabetes control.  In view of the significant weight loss and hyperglycaemia despite multiple agents, computerised tomography (CT) of the pancreas was arranged. This revealed pancreatic duct dilatation within an atrophic pancreatic tail. Magnetic Resonance Cholangiopancreatography (MRCP) demonstrated a prominence in the pancreatic head and neck region which appeared malignant when further imaged with endoscopic ultrasound (EUS). 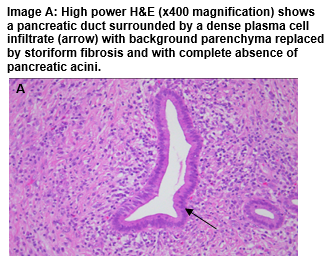 Biopsy of the pancreatic head yielded insufficient material for diagnosis but given the high index of suspicion for malignancy arising from the clinical and radiological findings, a decision was made at a multi-disciplinary team meeting to refer for surgical resection. The patient underwent a Whipple procedure, during which a hard mass was discovered in the pancreatic head. Histopathology revealed the mass was an area of chronic pancreatitis with features of IgG4 related Type 1 AIP. Post operatively, the patient commenced pancreatic enzyme supplementation and a basal-bolus insulin regime. He regained 5kg in weight. He subsequently had multiple admissions to hospital with autoimmune cholangitis requiring steroids. Currently, he is well with excellent glycaemic control on a low dose of basal insulin, Metformin 1g daily and Gliclazide 30mg daily. 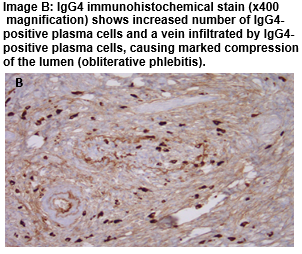 Discussion:
The reported prevalence of diabetes in AIP is 41-76% and tends to occur within a year of diagnosis2. Diabetes in AIP appears to be mediated by inflammatory cell infiltration and distortion of the pancreatic Beta cells5, and hence some studies report improvement in insulin secretion and glycaemic control in patients with biopsy proven AIP during and after treatment with steroids6,7. Patients with pre-existing diabetes may experience a deterioration in glycaemic control with the onset of AIP as was seen in this case. Pancreatic imaging should be considered in older patients presenting with poorly controlled diabetes associated with weight loss to rule out malignancy. Characteristic features of AIP on imaging include a diffusely enlarged ‘sausage shaped’ pancreas, pancreatic duct dilatation with strictured segments or focal enlargement of the gland as was seen in the current case3. Owing to its similar presentation to pancreatic malignancy, AIP is often diagnosed on post-operative specimens. Histological features include periductal fibrosis with obliterative phlebitis surrounding venules whilst immunostaining reveals abundant IgG4 positive plasma cells8. In this case, the pancreatic biopsy retrieved at EUS was inconclusive, but the suspicious nature of the presentation prompted resection of the mass.

In summary, AIP should be considered in the differential diagnosis of pancreatic cancer and every effort should be made to confirm the diagnosis as it may spare patients from unnecessary surgery.

Conflict of Interest:
The authors of this paper have no conflicts of interest to declare.