Testicular pain is a common presentation in the emergency department. The cause includes a wide array of differentials. This report highlights a case of thrombosis of the pampiniform plexus as a rare cause of testicular pain. Doppler ultrasound should be the first line investigation. Symptomatic relief with anti-inflammatory medication should be sufficient for management.

Testicular pain is a common presentation in the emergency department. The cause includes a wide array of differentials. This case report highlights a rare cause of testicular pain which can be diagnosed by non-invasive imaging.

A 23 year old man presented to the Emergency Department with left sided testicular and groin pain. This pain had begun insidiously two days previous during this man’s normal working day. He described a distressing and unremitting pain that radiated up the left groin towards the left flank. There were no urinary or bowel symptoms. There was no past medical history of note. Gross examination of the testis was unremarkable. There was exquisite tenderness in the superior left testicular region, along the epididymis and spermatic cord on clinical exam. There was no palpable mass, trans-illuminable swelling, hernia or temperature gradient. Ultrasound revealed an expanded vein in the left spermatic cord which contained echogenic material consistent with thrombus, see Figure 1 and 2. There was no abnormality in the testicular vein or artery. The testes, epididymi or kidneys were unremarkable. The appearances were consistent with a thrombosed left pampiniform plexus.This patient was managed at Emergency Department level following consultation with the Urology team. A thrombophilia screen was sent for analysis. The patient was discharged on Ibuprofen and advised to return if symptoms of a pulmonary embolism developed. At follow up outpatients one month later the pain had resolved. The thrombophilia screen was negative. No further follow up was deemed necessary. 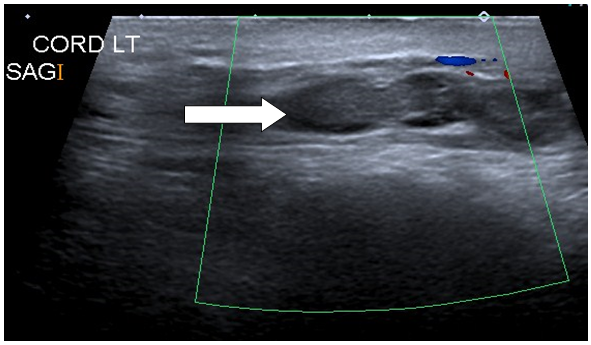 Figure 2: The non-compressible vessel (arrow) in the spermatic cord is separate to the testicular artery (arrowhead) and vein (curved arrow) which appear normal.

Spontaneous thrombosis of the pampiniform plexus is very uncommon, with few references in the literature. Pampiniform plexus thrombosis has previously been misdiagnosed as an incarcerated inguinal hernia1 and orchitis2. Diagnosis can be challenging. In 1993 Gleason described a case where the sonographic appearance mimicked an incarcerated left inguinal hernia by demonstrating a tubular, hypoechoic, noncompressible, cystic inguinal mass with no flow evident on colour Doppler imaging3. Hence because of these misdiagnosed cases men with thrombosis of the pampiniform plexus often undergo unnecessary treatment such that the diagnosis is often only made intra-operatively. Interestingly, Hashimoto and Vibeto noted in 2006 that thirteen of fifteen cases they examined involved the left side1. There are no guidelines for the management of a pampiniform plexus vein thrombosis. Investigations outlined in previous case reports include a thrombophilia screen1,4, CT of abdomen to rule out causes of venous obstruction1 and surgical exploration for possible torsion, incarcerated hernia or malignancy5. Since these veins do not directly communicate with the inferior vena cava or left renal vein, the chances of embolization are small. Symptomatic treatment with non-steroidal anti-inflammatory medications is generally sufficient without the need for anti-coagulation. Examination with ultrasound should be the first line investigation. It offers a non invasive and accurate means of establishing the diagnosis. Further imaging is often unnecessary if the thrombosis is confined to the superficial spermatic vein.

In summary this is a rare presentation that is low of the differential list for causes of testicular and or groin pain. Left sided pain is the most common feature based on cumulative case report data. Doppler ultrasound provided a clear diagnosis in this case. Management remains unclear but proximal extension of the thrombosis is the most significant indication for further investigation.