Sagittal synostosis (SS) is the commonest form of craniosynostosis. Children with sagittal synostosis in Ireland are treated in the National Paediatric Craniofacial Centre (NPCC) in Temple Street Children’s University Hospital. This retrospective study analysed the correlation between referral patterns to the unit and age at operation. The notes of 81 patients referred over a 5 year period (April 2008 – April 2013) to the NPCC with non-syndromic SS were reviewed and demographics and referral information were recorded. Of 81 patients reviewed, 60 (74%) were referred before 6 months of age, while 21 (26%) had late referrals. Neonatologists referred 100% of infants before 6 months, paediatricians referred 71%, and GPs 64%. Later referral was associated with a more complex referral pathway, including multiple-steps of referral and unnecessary investigations. Improved clinician knowledge and emphasis on the importance of early referral may lead to a reduction in late referrals.

Introduction
Sagittal synostosis is the premature closure of the sagittal suture. It is the commonest form of craniosynostosis, accounting for 60% of cases1. The majority of presentations are those of isolated sagittal synostosis with a prevalence estimated at 1 in 5000 children2. Of these cases, there is a familial component in only two percent, with the remainder arising in a sporadic fashion1.

The NPCC is the only centre for the management of craniosynostosis in Ireland. Since 2008, the surgical management of isolated synostosis in this centre has been extended strip cranial vault remodelling (ESCVR) for infants under 6 months. Prior to 2008, patients with sagittal synostosis were treated with a simple sagittal suturectomy3. The simple suturectomy was shown to be inadequate in 25% of patients and hence the introduction of the more comprehensive ESCVR procedure. ESCVR is a passive operation as it depends, to a significant degree on the growth of the brain to normalise the head shape following removal of the fused suture which was previously restricting normal growth. When the fused suture is removed before 6 months (with ESCVR), the developing brain is no longer constricted and grows normally, which in turn leads to the development of the normal head shape in these patients.

However, in patients seen after 6 months, simply removing the sagittal suture in these patients is unlikely lead to a normal head shape as the rate of growth of the brain is slowing down and therefore its influence on the future head shape is reduced (9). For this reason children over 6 months of age referred to the NPCC undergo subtotal or total cranial vault remodeling (TCVR) depending on the extent of their deformity. TCVR is a much more complex and lengthy procedure than ESCVR in which the goal of the surgeon is to approximate the normal head shape by releasing the synostotic constraint and reducing the antero-posterior length while increasing the transverse width of the skull4,5. The objectives of this study were to investigate the age at which the sagittal synostosis is noticed and by whom, the age at referral and the source of the referral to the unit.

Methods
A retrospective analysis was undertaken using files for all patients referred to the NPCC between April 2008 and April 2013 with sagittal synostosis. All cases of syndromic SS and any previous craniofacial operation were then excluded. Over this period there were 81 cases of infants with non-syndromic SS which met our criteria. These patients’ files were then reviewed and demographics, referral information and investigations undertaken before referral were recorded.

Results
Using statistics on birth rate from the Central Statistics Office, it was possible to calculate the incidence of non-syndromic SS in Ireland between 2008 and 20126. From our results, the incidence rate is approximately one per 5,000 live births in Ireland. This is similar to figures reported elsewhere in literature2. There were 54 males and 23 females referred between 2008 and 2012, giving a Male:Female ratio of 2.35. There is significant variation in distribution of referrals, even when population density is taken into account. Cavan had four cases (one in 18,296 population) while Kerry reported only one case (one in 145,502). Average distribution for all counties is one per 66,451 population over the 5 year period. Figure 1 below illustrates referral by county on a map of Ireland7. 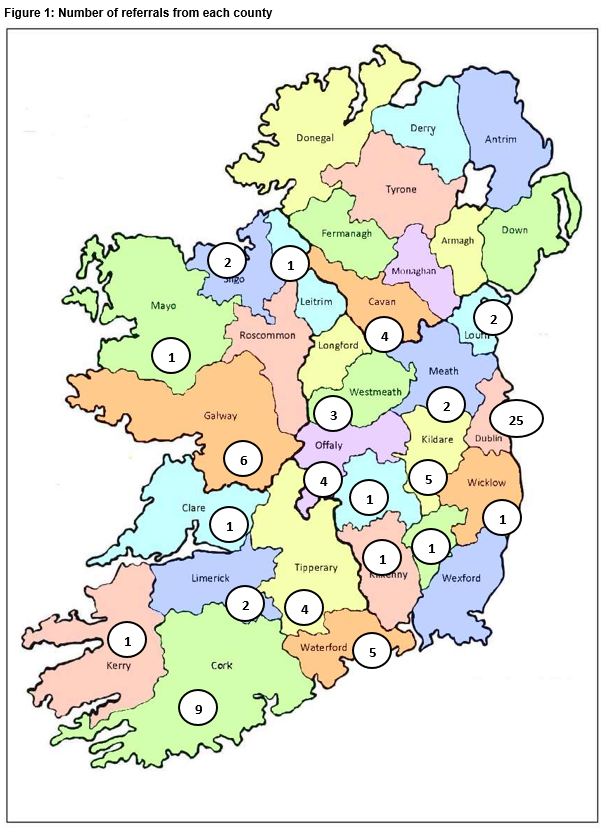 It is difficult to determine an accurate picture of distribution from regions that only referred one or two cases. We reviewed referrals from 5 most densely populated regions in Ireland (Dublin, Cork, Galway, Limerick, and Waterford). The numbers referred varies considerably across these areas with an average of one per 53,802 of population over the period studied (Range – one per 22,759 to one per 95,905).

The majority of cases were detected by neonatologists and paediatricians, with the remainder detected in the community, either by GPs or a public health nurse (Table 3). Reviewing the age at referral showed that when specialists, such as neonatologists or paediatricians noticed the deformity, the child was generally referred to the unit earlier (median - 0.5 and two months). The average age for referral was 4.7 months for GPs (median four months), with public health nurses and area medical officers detecting at older ages (median – 7 and 16 months).

When reviewing patients’ charts, we chose to look at lead times between referral and their first appointment in outpatients’ clinic, and their first appointment and their surgery. There were two groups, those that were referred before 6 months, and those referred after. In patients under 6 months, there is a short lead time between referral and review in clinic (average – 39 days, median 29 days) with a lead-time between review and surgery of 61 days on average. In those patients referred after 6 months of age, the lead-times to clinic and to theatre are increased (average – 66 days and 209 days). While in many cases the diagnosis of sagittal synostosis can be made clinically, there are instances where radiological investigations are required. Upon review of the cases in this study, over a third of patients were diagnosed clinically. However, many of the children underwent a number of radiological investigations before being referred to the craniofacial centre, including skull x-ray, CT head or both, with multiple investigations being associated with delayed referral.

Discussion
This retrospective study of non-syndromic SS referrals to the National Paediatric Craniofacial Centre over a 5-year period (April 2008-October 2013) has yielded several points of interest. The incidence rate for non-syndromic SS is approximately one in 5,000 live births, in line with the rate found in literature, however the male:female ratio of 2.35:1 differs from the ratio of 3.5:1 reported in a genetic study carried out by Lajeunie in 19962. The information regarding referral based on speciality highlights the importance of knowledge and experience for appropriate referral of SS to the NPCC. Paediatricians, and in particular, neonatologists, have an excellent record for early referral. However, despite this, almost a quarter of the referrals were received after 6 months of age. Reasons for late referral likely include reduced knowledge and understanding of the condition among non-specialists. There was also an issue with low rates of direct referrals from GPs, where many referred onto paediatric services, thereby delaying the infant being seen in the NPCC. Pre-referral investigations may also be a factor in infants whose referral was delayed, with many undergoing multiple investigations including CT imaging. Sagittal synostosis is a clinical diagnosis and rarely requires radiologic confirmation9. With regard to lead-times, the results of this study show that the NPCC has acted promptly over the previous 5 years to examine and operate on infants with SS. The median time from referral to clinic is 29 days (minimum – two days) and from clinic to theatre is 57 days (minimum – 5 days). This highlights the understanding within the NPCC for swift intervention for patients under 6 months of age.

Reviewing this study, there are a number of changes that need to be implemented to improve referral pathways for SS in Ireland. Firstly, all maternity units should be informed of the importance of recognising SS in the neonatal period. Secondly, primary care physicians should be informed of the importance of early referral, and should refer directly to the NPCC to avoid delaying any necessary intervention. Thirdly, SS is principally a clinical diagnosis, and referral should not be delayed for numerous investigations. An electronic referral pro forma is currently being developed within the NPCC to allow for swift and easy referral of these patients through a clear pathway that aims to significantly decrease the numbers of patients that are seen late in the NPCC.

Conflict of Interest Statement
The authors whose names are listed immediately below certify that they have NO affiliations with or involvement in any organization or entity with any financial interest (such as honoraria; educational grants; participation in speakers’ bureaus; membership, employment, consultancies, stock ownership, or other equity interest; and expert testimony or patent-licensing arrangements), or non-financial interest (such as personal or professional relationships, affiliations, knowledge or beliefs) in the subject matter or materials discussed in this manuscript.