Accrual to cancer clinical trials (CCT) is imperative to safeguard continued improvement in cancer outcomes. A retrospective chart review was performed of patients (n=140) starting a new anti-cancer agent in a north Dublin cancer centre. This review was performed over a four-month period, beginning in November 2015. Only 29% (n=41) had a CCT option. The overall accrual rate to CCT was 5% (n=7), which is comparable to internationally reported figures. The main reasons for failure to recruit to CCT included the lack of a CCT option for cancer type (n=30, 23%), stage (n=25, 19%), and line of treatment (n=23, 17%). Over the last decade, the rate of accrual to CCTs has in fact doubled and the number of trials open to recruitment has tripled.  Ongoing governmental and philanthropic support is necessary to continue this trend to further expand CCT patient options with a target accrual rate of 10%.

The standard oncology treatments of today were once examined in the setting of a cancer clinical trial (CCT). The standard treatments of tomorrow rely upon the completion of high quality studies.  However, poor accrual to CCTs may jeopardize continued progress in cancer drug development and approval. A total of 3-5% of all cancer patients annually enroll in clinical trials worldwide. This statistic has not improved since the 1980s.3 The All Ireland Co-operative Clinical Research Group (ICORG) coordinates cancer clinical trials in Ireland. It has established the infrastructure necessary to attract international research groups to open studies in Ireland. As a result, ICORG has developed a strong network with international research groups. This ensures that cancer patients in Ireland have access to treatments not otherwise available outside of the clinical trial arena. Understanding the patterns of recruitment to CCTs is an essential step towards improving accrual. In 2005, Morris et al, explored factors influencing enrolment to CCTs in a North Dublin cancer centre4. The overall accrual rate to CCTs was 2.4%. At that time, the main factors influencing recruitment to CCTs in Ireland were the absence of trial protocols for specific cancer types and stage of disease. The primary objective of this study is to determine the current rate of accrual to CCTs in Ireland and to examine the factors influencing recruitment. A secondary objective is to identify the progress that has been made in Ireland in relation to CCT accrual relative to decade ago.

Over a four-month period, all patients requiring the introduction of or a change in systemic therapy attended a North Dublin cancer centre and were assessed for potential eligibility for a CCT. The study population included new and established patients that had experienced disease progression or relapse. Patients with all cancer types and stages of disease were included. Patients were identified from a prospectively-maintained dataset of all patients commencing a new systemic treatment between 1st November 2014 and 28th February 2015.  Systemic treatment included intravenous or oral anti-cancer treatments. Patients requiring the introduction of or a change in anti-hormonal therapy were not included in this study. A retrospective chart review was conducted to determine the number of patients eligible for and the overall rate of accrual to a CCT. Each week, the outpatient clinic lists were screened in advance to identify potentially eligible patients for CCTs. The final decisions regarding patient treatment plans were made at consultant level. The following patient details were recorded: demographics, cancer diagnosis and stage, line of treatment, previous enrolment in a CCT, availability of a CCT, physician consideration of a CCT (where available) and the number of patients that enrolled in a CCT. In the case where there was no CCT option available for a patient, the reason for this was recorded. The overall rate of accrual to a CCT and the reasons for failure to recruit were also identified.  Data analysis was undertaken using SPSS (V 20) software. The demographic and clinical characteristics of the study population were summarized descriptively. 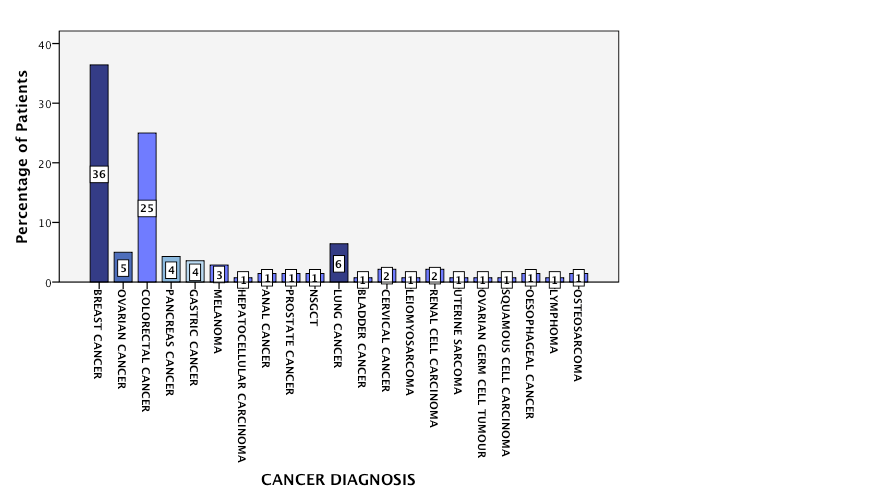 A total of 140 oncology patients were considered for initiation of, or a change in, systemic therapy during the period of assessment.  Nineteen CCTs were open for recruitment (clinical studies =74%, translational studies = 26%). Five trials closed and no trials opened during the study period. The CCTs were available for 10 different cancer types and included a variety of stages of disease and lines of treatment (Table 1). The median age was 60.5 years (IQR = 19). The majority of patients were aged between 36 and 65 years (n=84, 60%). A third were aged 65 years (n= 51, 36.4%), and 5 patients were aged 35 years old.  The majority of the population was female (n=92, 66%) and Caucasian (n=140, 100%). Breast and colorectal cancer were the most common cancer types represented within the population accounting for 37% (n=51) and 25% (n= 34) of the cancer diagnoses respectively (Figure 1).  The group was evenly split as regards cancer stage (early stage, n=67 (48%), advanced disease, n=73 (52%)).  This division was reflected in the lines of treatment under consideration: adjuvant, n=41 (29.3%), neo-adjuvant, n=24 (17.1%) and a palliative line of treatment including: 1st line, n=30 (21.4%), 2nd line, n=16 (11.4%) or 3rd line/higher, n=29 (20.7%). Less than a third (n=41, 29%) of the population had a CCT option available to them. The treating physician considered the CCT option in the majority of cases (n=26, 63.4%). The option of CCT participation was discussed with the patient in just over half (n=14, 54%) of these cases. The reasons for failure to discuss the trial option included physician’s discretion (n=5); patient ineligibility (n=4); and patient previously declined enrolment in the CCT (n=2). A total of 8 patients agreed to participate in a CCT. One young, male patient who consented for an adjuvant melanoma study was subsequently deemed ineligible. Six patients declined the option to enroll in a CCT. A minority (n=13, 9%) of the study population had previously been enrolled in a CCT.

There was no CCT option available for the majority of the population (n=99, 71%). The absence of a trial for a specific cancer type, stage of disease and line of treatment were the most common reasons underlying the limited CCT options available to this population. The main reasons behind the lack of CCT availability for this study population are highlighted in Figure 2. The accrual rate to a CCT for this period of study was 5%, which is in line with international figures. This study highlighted multiple factors to explain the failure to recruit to CCTs (Table 2). 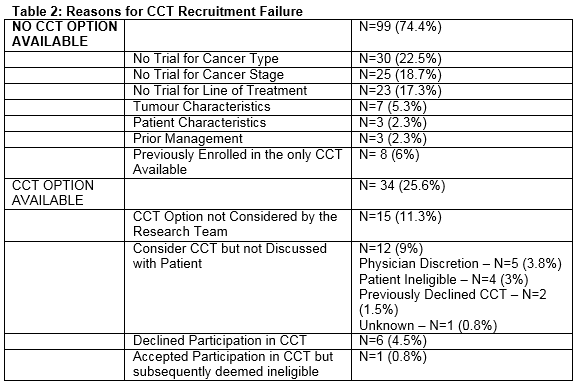 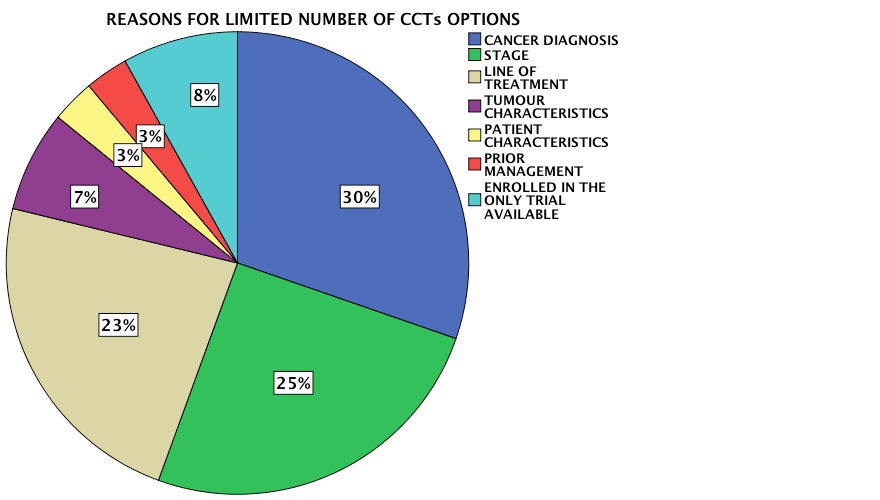 In Ireland, the long-term survival from cancer has significantly increased over the past decade5. The completion of high quality clinical trials contributed to this improvement by providing patients with access to new and effective treatments which have since then become new standard of care treatment approaches for many cancers. Poor accrual to CCTs is one of the rate limiting factors for continued progress in cancer care. In order to safeguard continued advancement, regular evaluation of factors influencing accrual to CCTs is necessary. Our study identifies a 5% accrual rate to CCTs, which is comparable to internationally reported figures. However, this accrual rate is low and we must strive for better. According to the American Society of Clinical Oncology Statement on Minimum Standards and Attributes of Exemplary Clinical Trial Sites, exemplary clinical trial units (CTUs) should accrue at least 10% of the patients treated at the site onto CCTs6. Accrual goals should be based on a site’s demographics and cultural perspectives. Regular auditing is encouraged to ascertain if targets are being reached. Possible interventions to promote recruitment to CCTs include: gap analyses, physician champions and diversification of the clinical trial portfolio. Irrespective of the exact accrual goal a CTU should aim to have the highest accrual activity possible7.

This study identifies the lack of a CCT option as the main reason for failure to recruit to CCTs. Absence of a trial protocol available for a specific cancer type, stage of disease and line of treatment were the three most common reasons why patients did not have the option to participate in a CCT. This problem is not unique to Ireland. In the United States, studies show that between 60% and 77% of patients do not have a CCT option available to them8,9. The availability of CCTs is dependent on the total number of trials offered by a CTU10. The obvious solution to our recruitment issue would be to open more studies. However, running of a CTU is costly and there are many practical barriers that influence patterns of recruitment to CCTs. The cost per trial participant in publicly funded studies is often much higher than the per-case study reimbursement offered11. The shortfall incurred by CTUs creates difficulty for them to run cost-neutral or cost efficient research programs. This financial strain limits the ability of sites to open new studies. Maintaining compliance with regulations overseeing the conduct of clinical trials, adhering to codes of good clinical practice and providing the intense patient monitoring and follow-up required by clinical trial protocols are labour intensive12. Funding for CTUs is often dependent on the number of study participants enrolled in the previous year. However, increasing the accrual rate to CCTs increases the workload, which can strain a workforce of already limited resources. It is important for a CTU to ensure that the studies it opens are scientifically compelling and address the current needs of their patient population.

Conducting a gap analysis equips a CTU with information required to ensure that its future trial portfolio will include studies most appropriate for its population. Analysing the demographics and cancer specific prevalence of the population served by a CTU identifies unique population features that may influence eligibility for CCTs. This helps to reduce ineffective expenditure of resources on trials that are unlikely to accrue at the site. A gap analysis compares the demographics of the whole population treated at a site with those of patients enrolled onto clinical trials. If a gap is apparent, the CTU team should explore the reasons why this gap exists and develop interventions for engaging the population7. A quarter of the population examined in this study had an option to participate in a CCT but did not enrol in a study. The main reason identified for this was oversight by the research team to consider this an option. In order to overcome this problem, clinical research needs to be embedded into the culture of the site. Regular unit meetings with the research team and designating “physician champions” for specific trials help to educate and raise awareness of the clinical trials available at the site among all team members. A total of 6 patients declined the option to take part in a CCT. It is important to establish the reasons why patients decline participation. This information might offer insight into how we can improve accrual to CCTs in the future.

The first study to examine patterns of patient participation in CCTs in Ireland was published almost a decade ago4. Comparison of these two studies draws upon two main conclusions. Firstly, both studies identified similar reasons to explain failure to accrue to CCTs. Secondly, progress has been made in the area of CCTs and accrual to CCTs in Ireland over the past decade. The rate of accrual to CCTs has doubled and the number of trials open to recruitment has tripled. The CCT portfolio has expanded to include translational studies and encompass a broad range of cancer types. It must be acknowledged that none of the progress we have witnessed would have been possible without funding from the Health Research Board of Ireland, the Irish Cancer Society and other charitable donations. However, it must also be recognized that funding designated for CTUs in Ireland has been significantly reduced since the downturn in the Irish economy in 2009. ICORG and the respective CTUs should be commended for their perseverance to advance cancer care in Ireland despite dwindling resources. This attitude instils confidence that in ten years’ time the CCT accrual target of 10% will be achieved.

None of the authors have any conflicts of interest to declare.

3. Siminoff LA. Why learning to communicate with our patients is so important: using communication to enhance accrual to cancer clinical trials. J Clin Oncol. 2008 Jun 1;26:2614-5.