Sewing needles, albeit a rare case of penetrating cardiac injury, are potentially life-threatening. We report a case of successful intra-cardiac needle removal from a 32 year old who inserted multiple needles into the chest and abdomen.

Introduction
Despite being rarely seen, penetrating cardiac injuries are clinically significant given their high risk of mortality1,2. Heart lesions caused by the introduction of pins or needles in an attempt to inflict self-injury have been described only on very few occasions3,4,5 . Such self-mutilation behaviour has been observed in various psychiatric disorders, including post-traumatic stress disorder, borderline personality disorder, factitious disorder, substance use disorders, depression and schizophrenia.

Case Report
A 32-year-old lady attended Connolly Hospital Emergency department reporting that she had inserted ‘a sewing needle’ in her left anterior chest. This was allegedly in an attempt to deal with anxiety brought on by paranoid delusions. She denied any medical problems and was not on any medications. On examination, vital signs revealed hypotension (BP 88/52) with a normal heart rate. There were no clinical signs of tamponade. The chest wall had multiple fine marks of entry wounds but no obvious foreign body was visualised. The patient was in no obvious distress. Electrocardiography showed an incomplete right bundle branch block. Routine blood results apart from leucocytosis were grossly normal. A chest radiography revealed multiple sewing needles (at least 19) projected over the soft tissues anterior to the left chest wall and upper abdomen with no gross area of collapse or consolidation. A Computed tomography of the chest & upper abdomen showed multiple sewing needles within the anterior thoracic wall including the breast tissue, two intra-cardiac needles with resultant haemopericardium, one needle noted in the upper abdominal wall and an additional needle lying between loops of the small bowel (Fig 1 & 2). 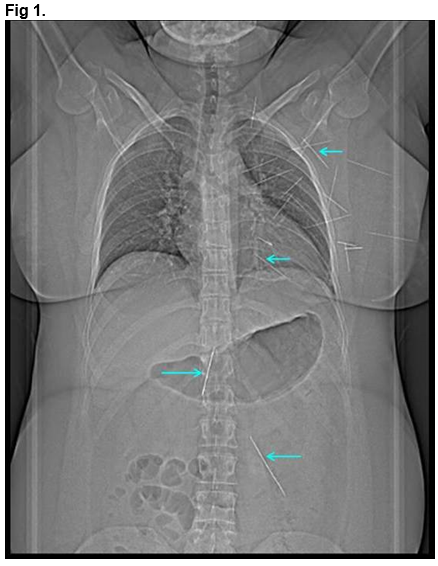 The patient was urgently transferred to the Mater Hospital Cardiothoracic surgery speciality and underwent surgery the same day. A median sternotomy procedure was performed and intraoperative Transoesophageal Echocardiography was also employed. Fifty millilitres of blood was evacuated from the pericardium. Only 1 needle found penetrating the Right ventricle was extracted. 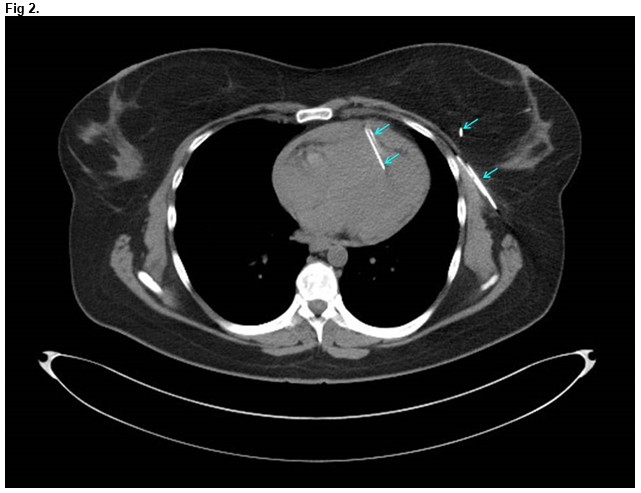 General Surgeons, who were also present intraoperatively, laparoscopically extracted the 2 needles from the abdomen. The remaining needles in the left breast tissue were not for further surgical intervention. The operation was completed without any complication. A Transthoracic Echocardiogram showed a LVEF of 55-60% with normal Right ventricle size and function. There was no valve pathology and no pericardial effusion.The patient did well post-operatively and was linked with Psychiatry services for further management. She was found to have a diagnosis of Schizophrenia.

Discussion
Although an innocuous presentation, this was a life-threatening injury. Even though a foreign body is only partially inserted into the heart, it can become completely embedded in the wall due to strong cardiac contractions. The migration of such objects into the heart chambers can cause intramural hematomas, tamponade, infection, embolism, valve dysfunction and death, and their extraction is recommended2,3. The most common symptoms are dyspnoea and chest pain, but penetrating cardiac injury can be asymptomatic6. Our case is unique in that the patient presented to our Emergency service with multiple needles to the chest and abdomen but without such serious complications.

In 1969, Schechter and Gilbert7 reviewed 157 published reports of injuries in the heart and great vessels caused by pins and needles, most of them accidental (56%) or self-inflicted (33%) due to an underlying psychiatric illness.There were 40 case reports of self-inflicted intracardiac needle injuries during the period from 1967 to 20138 .There was a preponderance of females compared to males (females = 23, males = 14, not mentioned = 3). The majority (75%) of the patients were in the age group of 12 to 49 years. About 70% use a single needle but 30% may use multiple needles. Second attempts are rare. Majority of the patients (85%) are managed by surgery and recover from the injury. The condition has a low mortality rate of 5%.Self-inflicted intracardiac needle injuries are seen mainly in young and middle-aged adults suffering from psychiatric disorders, commonly depression, schizophrenia and substance use disorders.

Conflict of Interest
The authors do not have any conflict of interest to disclose.