Aims
To assess if there was a significant difference in the number of positive studies for pulmonary embolism between obese and non obese patients.

Methods
A retrospective analysis of all CTPAs performed in our institution over one year in patients aged 18-50 was performed. Data regarding the diagnosis of pulmonary embolism, the presence of airways disease, other significant chest findings, D dimer values and demographic data including a BMI surrogate was obtained.

Conclusions
We are not over imaging the obese patient, but are over imaging patients in general with suspected PE, but are exposing a significant number overall, to unnecessary radiation.

Venous thromboembolism is a significant cause of morbidity and mortality globally and has a multifactorial aetiology, that usually involves two or more risk factors1, including immobilization, inherited thrombophilia, smoking and renal disorder eg nephrotic syndrome, to name a few. Obesity is also a significant global health issue and a known risk factor for venous thromboembolism1.  Many signs and symptoms of pulmonary embolism such as tachycardia, shortness of breath and hypoxaemia have low specificity and can be found at baseline in obese patients3. Please see Table below.

The physical examination is also challenging in patients with elevated BMI, and unfortunately, obesity is not included in any of the commonly used diagnostic algorithms to determine pre test probability of PE, such as the Well’s score or the Geneva Score. As a result of this, clinicians very often rely on imaging to aid diagnosis in this patient cohort.

CT pulmonary angiogram is the gold standard for diagnosis of pulmonary embolism, and is one of the most commonly ordered studies in a radiology department. However, its dose is not insignificant, especially in women where the breast dose can be up to 70mGy2.

From our everyday practice, it was felt that a lot of the CTPA studies being performed in our department were negative, in particular those performed on obese patients due to the reasons listed above.

Our study aimed to audit the amount of CTPAs being performed in our department over a one year period, and determine if there was a significant difference in the number of positive studies for PE between obese and non obese patients in the age category 18-50. We chose this young cohort as the issue of radiation dose and stochastic effects such as increased cancer risk and hereditary effects are much more relevant in this age group.

A list was obtained of all the CTPAs performed in our institution between the ages 18-50 over a one year period. Data was obtained from the in hospital radiology information system. Images and reports were reviewed in consensus by two radiologists.  As this was a retrospective study and BMI data was not possible, a well established surrogate for BMI was used called the “Fat/Bone ratio”, which was obtained from the PA chest radiograph4. This involved measuring the soft tissue thickness over the acromio-clavicular joint and dividing it by the clavicular diameter at the midpoint of the clavicle. A result of 0.5 corresponded to a BMI of 20, 1.0 a BMI of 25, and 1.5 a BMI of 30. Subcutaneous fat thickness at the level of T9 spinous process was also used as an additional correlate for body fat.

Inclusion criteria were that the patient had an adequate chest radiograph and were aged between 18-50. The data was analysed and the following variables audited: age, sex, BMI, diagnosis of pulmonary embolism, the presence of airways disease, D dimer result, other significant findings.

Two hundred and thirty CTPAs were performed in our institution over a one year period in patients with ages ranging from 18 up to but not including 50. Two hundred and twenty one patients met the inclusion criteria for our study and were included for analysis. One hundred and twenty-nine were male and 92 were female, with the average age being 36 ± 8 years. In relation to the obese category, the average age was 36 ± 7 years. Eleven (16%) were positive, and 58 (84%) were negative.

Eight of the 11 (72%) positive studies were provoked and three (28%) were unprovoked.  Patients who had provoked PE’s had the following risk factors; post-operative state, previous DVT, background of antiphospholipid syndrome, Crohn’s disease, cocaine use, ITP. Twenty-eight (41%) had no significant findings or airways disease. 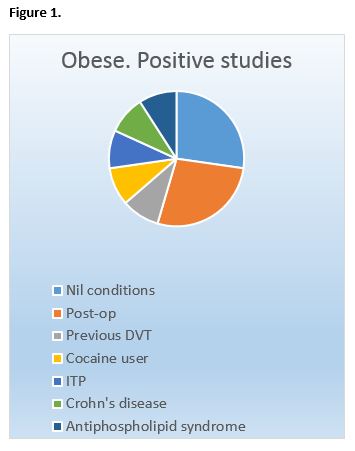 Thirteen (54%) of the 24 positive studies were provoked and 11 (46%) were unprovoked. Patients who had provoked PEs had the following risk factors; polytrauma, immobility, use of the oral contraceptive pill, malignant hypertension, long haul travel, intravenous drug use, post partum, and malignancy.

Seventy-five (49%) had no significant findings or airways disease. 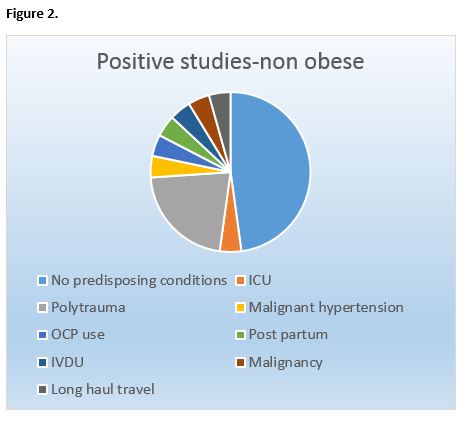 Ireland’s problem with obesity is a well established issue in today’s society. In the last two decades, the population who are overweight or obese has doubled8 and this is projected to worsen, if preventable measures are not put in place. CTPA is the most sensitive test for diagnosis of pulmonary embolism in both obese and non obese patients. Studies have shown that the diagnostic accuracy of CTPA in patients weighing 75-99kg or 100-150kg is not significantly different 4. Therefore it accounts for a significant proportion of the workload for any tertiary referral centre.

As the Irish population’s problem with obesity continues to rise, more requests for CTPAs will be placed due to the myriad of nonspecific signs and symptoms often present at baseline in the obese patient. As stated earlier, these patients can be dyspnoeic, tachycardic and even have ECG changes such as T wave flattening at baseline. Our initial thought was that due to these factors, we were over-imaging these patients and would therefore see a higher proportion of negative results in this cohort.

However, we were surprised to discover that there was no significant difference in the proportion of positive studies between the obese and non-obese population. As a reminder, 16% of our obese cohort and 15% of our non obese cohort had a positive result. This confirms that despite baseline symptoms of respiratory compromise being present in the obese population, it is a risk factor that contributes to pulmonary embolism along with other genetic and environmental factors, and that we are not over imaging the obese population as was initially suspected.

However, it is important to note that, in general, out of 221 patients, 186 (84%) were negative and 103 patients (46%) had a completely normal study with no significant findings. This indicates that we are over imaging patients with suspected pulmonary embolism and whether obese or non obese, exposing a young population to unnecessary radiation.  Also, many institutions use an increased dose protocol when imaging patients with a high BMI to improve image quality, meaning that this young overweight population are being exposed to more diagnostic radiation than ever before. The effects of this may be minimal but unfortunately that is unknown as having 24 hour CT readily available is a relatively recent phenomenon, and long term studies have yet to be performed.

Understandably, sometimes this cannot be avoided as anxiety induced tachycardia in the emergency department and the wide range of GI, cardiac and musculoskeletal conditions that can cause pleuritic chest pain pose a diagnostic dilemma 5.

The non specific D dimer laboratory test also often blurs the clinical picture, resulting in an increasing number of requests for CTPA due to raised D dimers, Our study proved its low specificity in the obese population as 52 out of 59 patients who had a D dimer performed (88%) had a positive result, and only 11 of these had an acute pulmonary embolus (21%).

With this in mind, careful physical examination and use of the Well's score and PERC criteria should be strictly implemented to avoid a relatively high effective dose to young patients 6,7. Furthermore, when appropriate, V/Q scanning should be performed as an alternative, especially in young women of child-bearing age.  This simple nuclear medicine study can be used when the patient in question has a normal chest radiograph and signs and symptoms of pulmonary embolism. It has a significantly lower dose than CTPA (3 mSv for a full V/Q study versus 5-10 mSv for CTPA)9.

Our study had some limitations, including using a surrogate for BMI as the study was a retrospective study, which limited our ability to get accurate BMI data on the patients included. However, we did find that our well established surrogate correlated well with body fat when measured at the level of T9 spinous process. This surrogate has been well accepted in the literature.

In conclusion, there was no significant difference in positive CTPA studies for pulmonary embolus between obese and non obese population aged 18-50 with suspected pulmonary embolus, contrary to our initial hypothesis. However, our study indicated that we are over imaging this cohort of patients in general, and exposing a high proportion of the young population to unnecessary radiation.

Declaration of Conflict of Interest
The authors have no conflicts of interest.