Sepsis related mortality rates remain high in Ireland at 60% 1. Early detection and protocolised treatment of sepsis has contributed to a significant reduction in the morbidity and mortality.  We carried out an audit to investigate prevalence of bacteraemia in patients presenting to the Acute Medical Unit (AMU) in Cork University Hospital, and to assess clinical characteristics, outcomes and management in accordance to the local and national sepsis protocols. Patients who had positive blood cultures taken at the time of the presentation between January 2015 and December 2016 were identified from the microbiology database. Demographic data, time of the triage, SIRS criteria met by presenting patients, time and choice of the first dose of antibiotics, and early/late mortality were identified from the patients’ medical notes.

Forty positive blood cultures were identified during the study period in 8820 patients attended the AMU. Of these 14 were Coagulase Negative Staphylococci and 3 Diphtheroid bacilli. Following review of clinical notes these were deemed to be contaminants and excluded from further analysis thus prevalence of clinically significant bacteraemia in patients presenting to the AMU was 0.3%. Median [IQR] age of patients presenting with bacteraemia was 78 [65-91] years (52% male). Median [IQR] number of comorbidities was 3 [2-4]). Hypertension, diabetes, and ischemic heart disease are the commonest co-morbidities identified in the study population.

Of patients identified with clinically significant bacteraemia, 22% had an Early Warning Score (EWS) >7. Only 5 out of 23 patients with bacteraemia completed the recommended sepsis 6 bundle. Antibiotics were administered within one hour in 49% of patients who were SIRS positive on presentation. All patients received recommended antibiotic therapy initially in accordance to the local antimicrobial guidelines. The mean time to positive blood culture result was over 48 hours. Urinary and respiratory infections were identified as the most common source of sepsis in the study population (44% and 26% respectively). E-Coli was the commonest organism isolated (Figure 1). Only 2 patients who presented with positive SIRS criteria had early mortality in the first week of presentation. While other 2 patients died within a month after their presentation. 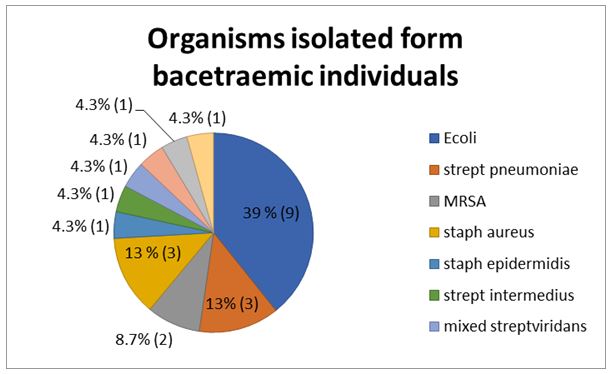 Figure 1: Percentages of the isolated organisms from blood cultures.

We noted there was a significant delay in the time to administer the first dose of antibiotics in half of the patients (average more than 3 hours). Only fifth of the participants have a complete sepsis 6 bundle documented in their medical notes. Further effort is needed to explore reasons of this significant delay and non-adherence to the local and international protocols. A significant number of contaminated blood cultures were identified by this study. False positive results are associated with prolong hospital stay, cost, and antibiotic use 2,3. Hence, the pre-test probability of bacteraemia should be considered in the context of appropriate signs and symptoms.

In terms of mortality in sepsis, early deaths were mainly attributable to intractable multiple organ failure related to the primary infection 4. Only two patients died within a week of their presentations (Early mortality). One of them had a respiratory sepsis, and the blood culture grew streptococcus pneumoniae. While the other early mortality reported in a patient presented with E-Coli septicaemia from a complicated urinary tract infection. Despite receiving an appropriate antibiotic covering the microorganisms, the two patients had organ dysfunction in top of multiple co-morbidities and died within 72 hours. Further efforts are needed to ensure early administration of antibiotics occurs given the potential benefits in terms of clinical outcome that can be achieved.