In Ireland, there is year-on-year variation in the seasonal influenza vaccine uptake for people aged 65 years and older. We obtained aggregate vaccine uptake data (2004/05-2014/15) by area and age group and applied the 2011 relative deprivation score and GP-density by area. Using Poisson regression model, we estimated the associations between those variables and uptake before and after the 2009 pandemic. After adjusting for age, deprivation status and GP-density, overall persons aged ≥65 years were less likely to receive the vaccine after the pandemic compared to before (RR=0.89, 95%CI: 0.82-0.96). Uptake increased with age; both those in the 70-74 and ≥75 year age groups were more likely to receive the vaccine compared to those aged 65-69 years (RR=1.18, 95%CI:1.14-1.24; RR=1.34, 95%CI:1.28-1.39 respectively). Qualitative studies should be undertaken to explore whether changes in public perception on risks of the disease and the vaccine and/or public funding and policy influenced the uptake.

Introduction
The annual burden of seasonal influenza is considerable and vaccination is currently the main available public health preventive measure1,2. In Ireland, the National Immunisation Advisory Committee (NIAC) recommends influenza vaccine to certain risk groups including persons aged 65 years and older and those with immunosuppression or chronic disease3. The vaccine is free for these groups but administration by the doctor or pharmacist is free only for those who hold a medical or GP visit card. In 2015, the proportion of the population aged 65 years and older with a medical/GP visit card was 83.5%, based on the 2015 Central Statistics Office population estimates4. Seasonal influenza vaccine uptake is calculated using GP and pharmacy influenza vaccine payment claims reported by the HSE’s Primary Care Reimbursement Service (PCRS) to the Health Protection Surveillance Centre (HPSC). These are the claims for payment from GPs and pharmacies for influenza vaccination of patients with medical/GP visit cards. In Ireland, influenza vaccine uptake has been calculated using these data since 20035. There have been several changes in the eligibility criteria for medical and GP visit cards since 2003 that have impacted on the calculation of the denominator6. The criteria changed in 2009 and, until 2015, automatic entitlement to a medical card for those 70 years and older no longer applied. All those aged 70 years and over who applied for a medical card were subject to a means test based on their income6. In 2015, there was another change and everyone 70 years and over was automatically entitled to a GP/medical card but this is not relevant to the period of our study.

The EU council recommendation for influenza vaccine coverage of all people at high risk, including older people, is 75% but only the Netherlands and the UK have reached this target7,8. Demographic characteristics mentioned primarily as being associated with vaccine uptake are age, gender, ethnicity, socio-economic status and accessibility to healthcare services9,10. In the literature, there are also other social factors that influence uptake, such as health beliefs, social and media influences and perceived susceptibility9,10. In addition, there is evidence that the 2009 pandemic may have influenced the uptake in certain countries, especially those where the uptake is lower than the European vaccination target8,11–14. Various interventions have been implemented internationally to increase the uptake; those with the aim of increasing access to healthcare have shown evidence of being more effective15. In Ireland, there is seasonal variation in influenza vaccine uptake which is below the European vaccination target across all years since 2003. It is suggested that the 2009 pandemic may have influenced the vaccine uptake but this has not been investigated further. Therefore, the aim of our study was to determine whether influenza vaccine uptake has been influenced by the 2009 influenza A(H1N1) pandemic, age, deprivation status or GP density by area in order to explore ways to reach the EU influenza vaccine uptake target of 75%.

Methods
The data for seasonal influenza vaccine uptake were obtained from PCRS. Influenza vaccine uptake was calculated by dividing the number of paid claims by the number of medical/GP visit cardholders. The number of paid claims is reported by month from September to August for each influenza season. The number of medical and GP visit cardholders is reported to HPSC every month and the number in our formula represents the median number of card holders for the period September to December, which is the period of time when the majority of influenza vaccinations were administered. We exported the data in aggregate format, as disaggregate data were not available. Vaccine uptake data by Health Service Executive (HSE) area (East, Midlands, Northeast, Southeast, South, West, Midwest, and Northwest) and age group in years (65-69, 70-74 and ≥75) for all seasons between 2004 and 2015 were used in this study.

The 2011 Pobal Haase‐Pratschke Deprivation Index was used and the relative deprivation score calculated for the same HSE-area was applied16. We used published data for GP density per county to calculate average density per HSE-area17,18. We created a variable indicating the period before (2004/05-2008/09) and after (2010/11-2014/15) the 2009 pandemic. We excluded the 2009/10 pandemic season from our analysis because the 2009 pandemic vaccine uptake data were collected separately and were not captured by the seasonal influenza vaccine surveillance data. For that reason, despite the high uptake of the pandemic vaccine that year, there was an artificial low uptake for seasonal vaccine that would influence the results of our analysis. Data were analysed using STATA 14. To estimate associations between the outcome ‘influenza vaccine uptake’ and the period before and after the 2009 pandemic, we used a Poisson regression model. The model was adjusted for the following variables: age group, deprivation status and GP density by area. 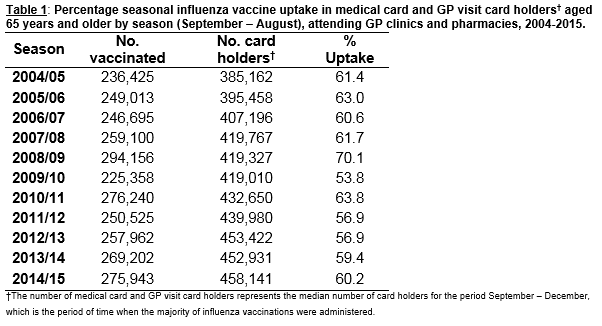 Figure 1 shows that influenza vaccine uptake increased with age. Those aged 75 years and older had the highest uptake across all seasons, followed by those aged 70-74 years. The lowest uptake was in the 65-69 year age group and was much lower compared to the other two age groups across all seasons. All age groups appear to follow the same pattern with the same peaks and falls in uptake (Figure 1). The Poisson regression model also showed that age was associated with seasonal influenza vaccine uptake (Table 2). After adjusting for the period before and after the 2009 pandemic, deprivation status and GP density by area, those aged 70-74 years and those aged 75 years and older were more likely to receive the vaccine compared to those aged 65-69 years (aRR=1.18, 95% CI: 1.14-1.24; aRR=1.34, 95%CI: 1.28-1.39 respectively). 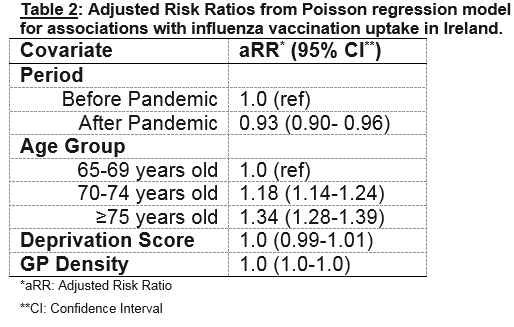 There was no significant association between uptake and deprivation score by area (Table 2). HSE areas with the highest/lowest uptake remained consistent across all seasons (Table 3). Finally, no association was found between GP density by area and influenza vaccine uptake (Table 2).

Discussion
In Ireland, the levels of seasonal influenza vaccine uptake in persons aged 65 years and older are lower after the 2009 influenza pandemic compared to before. Studies in other European countries have also shown a decrease in uptake after the influenza pandemic8,11–14. Some of the factors contributing to the decrease were public perception that influenza is a mild disease and also linking the vaccine to severe adverse effects11,13. Health workers were reported to have changed their opinions in favour of non-vaccination after the pandemic and this could have impacted on their recommendations to patients19,20. This study also found that uptake increased with age among persons aged 65 years and older in Ireland. In the literature, uptake was reported to be higher in those aged 65 years and older compared to other risk groups8. However, it had not been described whether this uptake differed between the age sub-groups over 64 years which would be informative for the Irish context because of the different funding mechanism for those aged 65-69 years, compared to those aged 70 years and older.

Socio-economic level can be measured using a number of variables and can differ between studies. A systematic review on the association between influenza uptake and various social determinants of health showed that some studies found an association between deprivation level and influenza vaccine uptake, while others did not10. The areas we used in our analysis might have been too large to detect such an association. But looking at the uptake by area, we see that those with the highest/lowest uptake remained consistent across all seasons. The consistently higher uptake in some areas could be due to the sustained health promotion work done locally promoting influenza vaccination. We used the variable GP density in our study as a proxy for accessibility to healthcare and convenience for the elderly to get the vaccine. In other published work, people have stated that vaccine delivery for older people can be enhanced when their accessibility to health services is easy10. The current study did not find any association between those two factors but disaggregate data are needed to further explore this.

This is the first study looking at the Irish influenza vaccine data for the elderly by time, comparing the uptake before and after the 2009 influenza pandemic and providing a measurable outcome for this difference. Two telephone surveys on seasonal influenza vaccination coverage have been published (one before and one after the 2009 pandemic) and showed that the uptake in 2013 was lower than 200621,22. This indicates a difference between the two periods but we cannot draw further conclusions or hypothesis generation by looking at only two points in time. It is also the first study that investigated the association of influenza vaccine uptake with age, deprivation status and GP density by area and provided a measurable outcome for these associations. Another strength of this study is the good quality of data provided by PCRS. Unlike other countries, in Ireland, GPs and pharmacies need to report to PCRS the number of vaccines administered in order to receive payment and, thus, the data are very complete and accurate.

The main limitation of the study is the fact that only aggregate data were available. The main issue with analysing aggregate data is the lack of information about correlation coefficients and the effect of missing data at patient level23. Also, despite the high percentage of medical/GP cardholders among those aged 65 years and older, there is still a small percentage of this group who do not hold a medical/GP card and have not been included in our study. Another limitation of this study is the fact that the eligibility criteria for the medical and GP cardholders changed in 2009 and this could have a potential impact on the denominator used in our study.A greater focus on qualitative work is required to investigate public and healthcare professionals’ perceptions on the risks of influenza and the vaccine as well as vaccine effectiveness in order to improve uptake. Qualitative studies should also be undertaken to further explore whether the uptake has been influenced by changes in public funding and policy including funding for public medical services. The introduction of pharmacies administering the vaccine in 2011 and changes concerning the payment of GPs for vaccine administration in 2013 could possibly influence the GPs’ attitude towards promotion of the vaccine to patients24,25. It would be important to further investigate the reason for the differences in uptake between age groups. The fact that GPs might be more likely to recommend the vaccine to older age groups or the different response of people to communications related to the vaccine could explain this difference and could help us address ways to improve this gap. Also, free administration of the influenza vaccine for all those aged 65-69 years may improve the uptake in this age group.

Our study showed that seasonal influenza vaccine uptake for persons aged 65 and older increased with age, but decreased overall since the 2009 pandemic. No significant association between uptake and deprivation status or GP density by area was identified but disaggregate data are needed to further explore these associations. More qualitative work related to people’s risk-benefit beliefs around influenza and influenza vaccination should be prioritised in order to find ways to improve uptake and reach the recommended EU target of 75%.