The pathogenesis of CF lung disease may start in infancy. Therefore, it is important to monitor the early stages of its progress. The Exhalyzer D is the first commercially available device designed to measure lung ventilation inhomogeneity at any age. This study was conducted to assess the performance and feasibility of using the Exhalyzer D in a paediatric CF clinic. A total of 91 subjects were recruited (23 controls, and 68 patients with CF). The majority of CF patients (79%) and controls (78%) completed at least two successful washouts. A strong linear correlation was noted between LCI and FEV1. Children with CF under six years of age struggled to perform the washout in a technically correct manner. A clear learning effect was observed, with improved technique and shorter testing times on repeated visits.

Introduction
Cystic fibrosis (CF) is an inherited chronic disease that primarily affects the lungs and digestive system1. CF is caused by a mutation in both copies of the gene that encodes for cystic fibrosis transmembrane conductance regulator (CFTR). Despite the fact that there are about 2,000 mutations identified to date, the majority of CF cases worldwide present themselves with Phe508del mutation on at least one allele. Ireland has the highest incidence of CF in the world2 with the rate of 1:1353. A recent review by VanDevanter et al. demonstrates that CF lung disease begins very early in life, with significant abnormalities detectable in pre-school aged children3. Modern CF care attempts to identify and monitor CF lung disease before it becomes clinically apparent4 as untreated early lung disease can lead to irreversible damage. This approach has led to the emergence of new techniques which can be applied to young children, are sensitive to early CF lung disease, and can be repeated over time. The Exhalyzer D (Eco Medics AG, Switzerland) represents the first commercially available device designed to measure lung ventilation inhomogeneity using the nitrogen multiple breath washout (MBW) method5. This technique has been shown to be the most sensitive marker of early CF lung disease6. It is also likely to have an application in other diseases where airway obstruction and ventilation inhomogeneity may be present, such as asthma, non-cystic fibrosis bronchiectasis, bronchiolitis obliterans, chronic obstructive pulmonary disease (COPD) and viral induced wheeze. The Exhalyzer D uses 100% O2 to washout normally resident nitrogen in the lungs. The measurement is performed with minimal subject effort, during tidal breathing. The main parameter measured is the Lung Clearance Index (LCI) which represents the number of lung volume turnovers required to clear the tracer gas7. The LCI is unique in being the only lung function test that can be applied throughout life8-10. The objective of this study was to determine the LCI relevant to the Irish paediatric CF population and, in doing so, to provide the baseline physiological data that will be assessed longitudinally.

Methods
The study was conducted at the University Hospital Limerick (UHL). The CF subjects were recruited from the paediatric CF clinic, while the control cohort of children without CF was recruited from Health Service Executive (HSE) Mid-West staff members. The hospital’s Research Ethics Committee approved the study and informed consent was obtained from the parent/guardian in both cohorts, with assent obtained from each child. The inclusion criterion for both cohorts was four years of age and older at the time of testing. In addition to this, subjects in the CF cohort had to be diagnosed with CF by documented presence of two CF disease-causing mutations and/or a sweat chloride value above 60 mmol/L. The exclusion criteria for control cohort were: diagnosis of CF, asthma, bronchiectasis, bronchiolitis obliterans, congenital cardiac condition, or a neuromuscular condition that would inhibit testing; current or recent (within the last two weeks) wheeze, cough, coryzal or pyrexial symptom; current use of antibiotics, bronchodilators, inhaled corticosteroids, oral corticosteroids or leukotriene receptor antagonists.

The exclusion criteria for CF cohort were: current or recent (within six weeks) CF infective exacerbation; current or recent (within two weeks) upper respiratory tract infection; current infection with Burkholderia cepacia complex (BCC); current infection with methicillin resistant Staphylococcus aureus (MRSA), or non-tuberculous mycobacterium (NTM). The LCI measurements were performed using the Exhalyzer D controlled with Spiroware 3.1 Software. The equipment was fitted with a single use bacterial filter (ANNOx, Cat No M30.8085) and disposable plastic mouthpiece (ANNOx, Cat No M30.8065) or reusable silicone mouthpiece (ANNOx, Cat No. M30.8097) for each subject. The equipment was set up as per manufacturer’s instructions and testing followed the European Respiratory Society (ERS) and American Thoracic Society (ATS) 2013 consensus statement11. The LCI values presented in this study are average of a minimum of two correctly executed washouts. Testing was performed in a clinical room in the paediatric CF unit by ANNOx certified operator (MM). During the test, the subject watched a DVD or on-screen washout display to encourage tidal breathing while the operator monitored the progress of washout and any breathing irregularities such as sighs, coughing, hyperventilating, or lack of adequate seal between lips and mouthpiece. 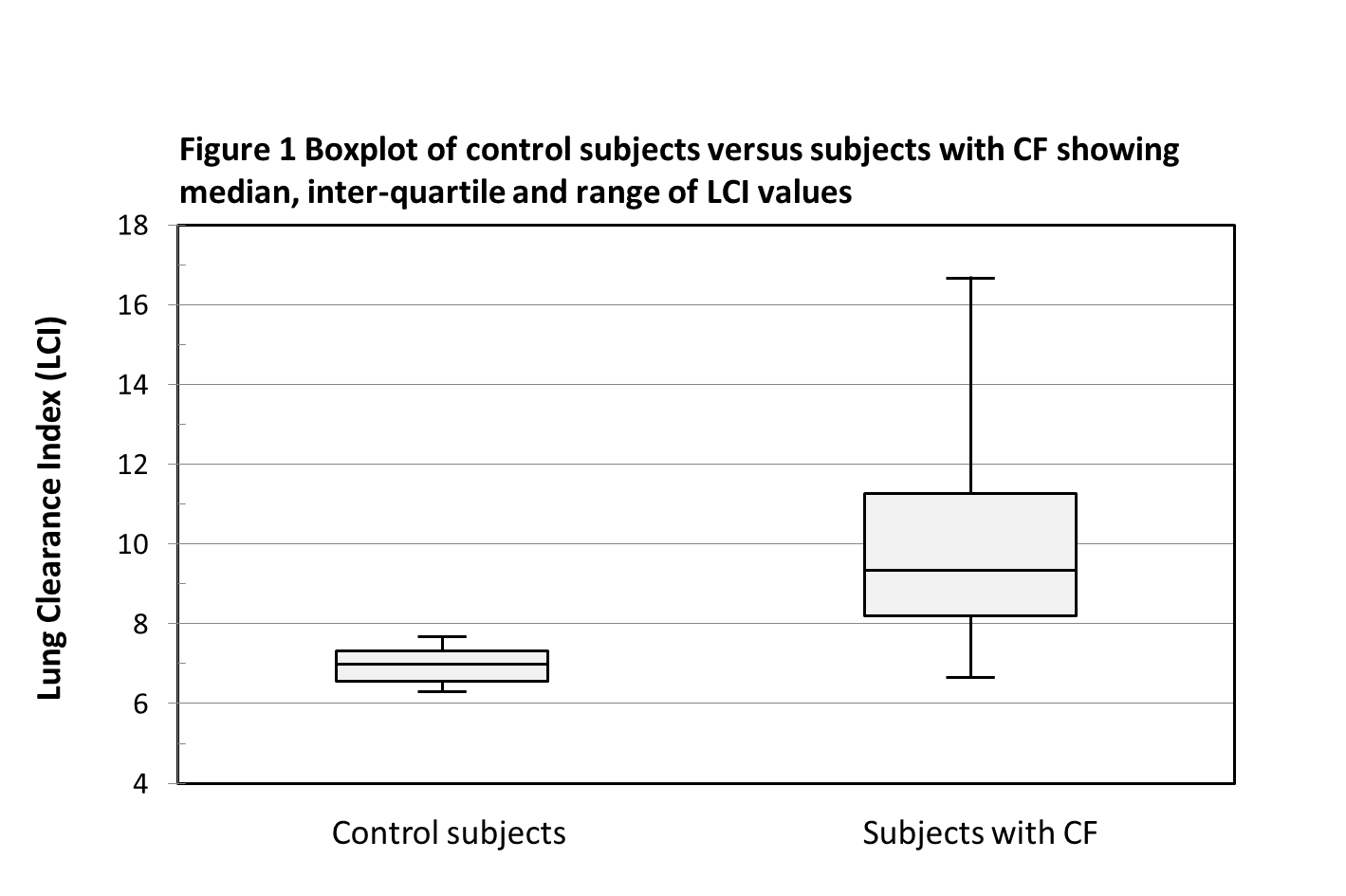 The upper limit of normal (ULN) was defined by the LCI mean of control cohort + 1.96 × SD and was 7.83. The LCI values of 11 CF subjects were recorded and classified as normal (below ULN), while the other 80% of the CF cohort had abnormal (raised) LCI values (Figure 2). 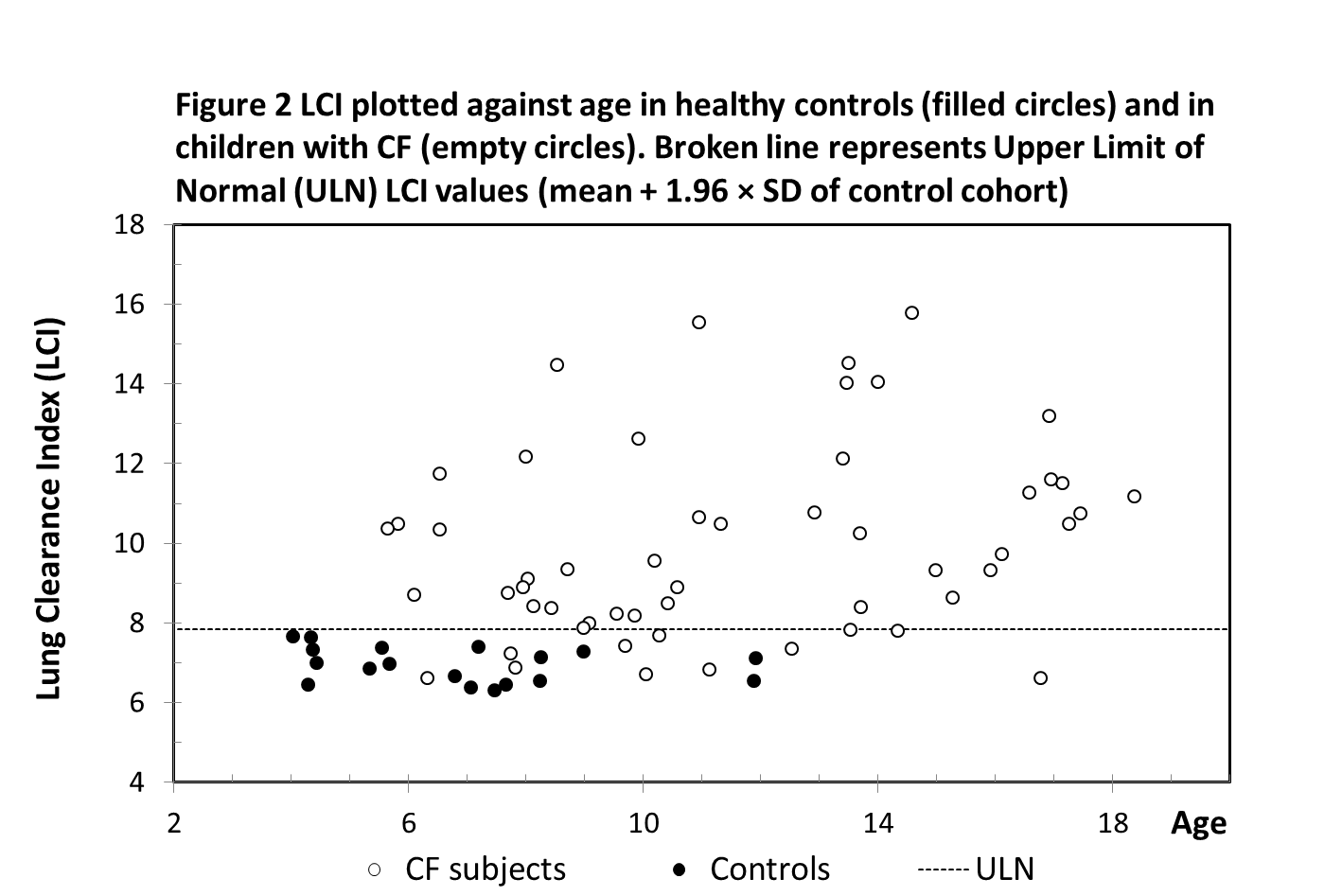 Forty-six CF subjects performed the spirometry testing on the same day as the MBW test. There is a strong negative, linear correlation between LCI and FEV1 (r = -0.71, p-value <0.001) (Figure 3). Twenty-three CF subjects, whose FEV1 value is classified as “normal” (FEV1 percent predicted ≥ 80%) had an abnormal LCI value. All CF subjects with FEV1 below 80% had LCI values above the ULN. Two children, despite having a FEV1 value within the normal range, had significantly elevated LCI values of 13.19 (poor adherence to an airway clearance regime) and 11.17 (copious sputum production). Two children who exhibited relatively low LCI values of 9.34 and 11.75 had unusually low FEV1 values, which were 48% and 49% respectively. It was noted that these children were not able to give a full effort in the forced expiratory manouvre. 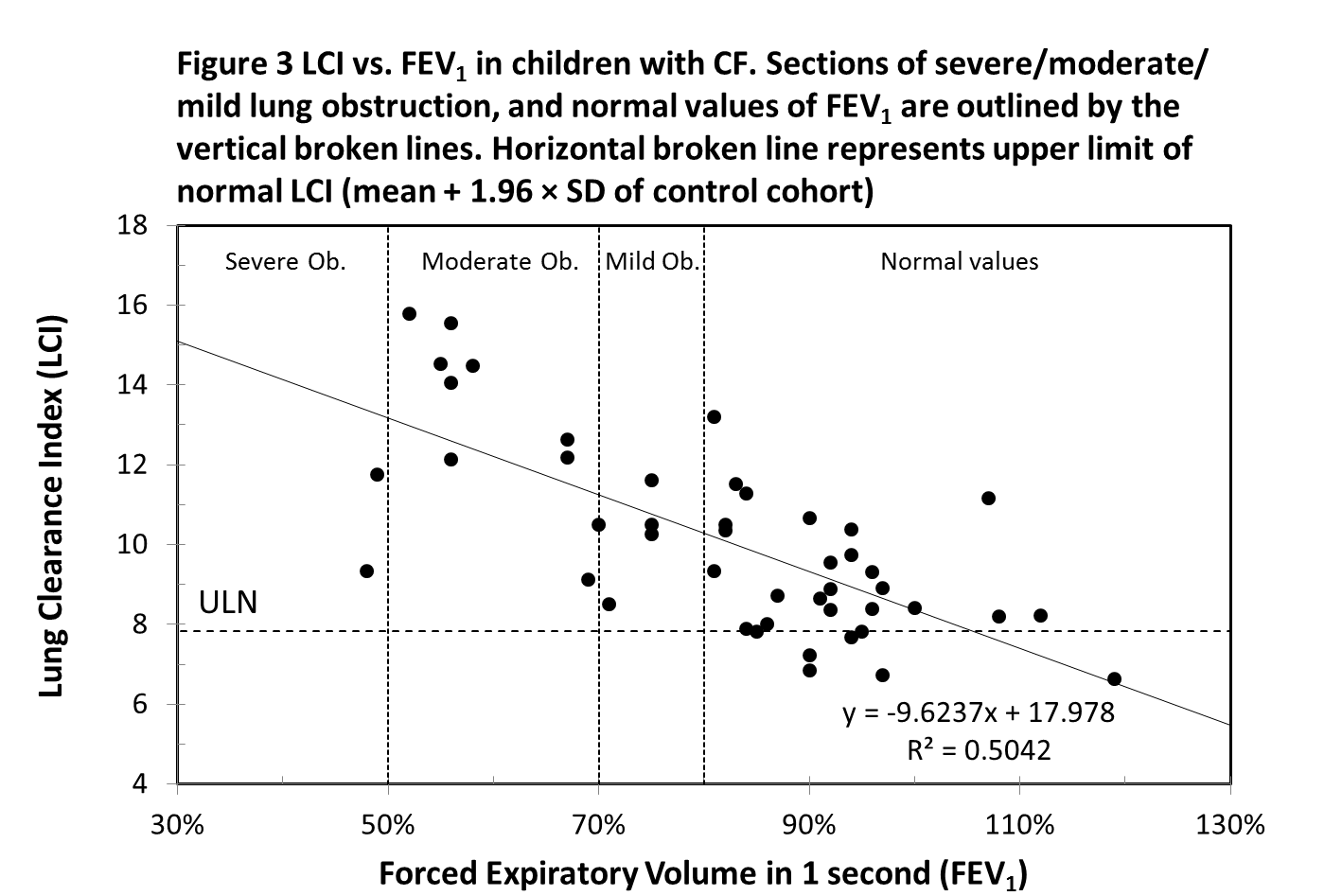 Discussion
This is the first study in Ireland to use a new device, the Exhalyzer D, to measure ventilation inhomogeneity of the lungs of children with CF. We have demonstrated that LCI values are significantly different between a CF and a control cohort of “healthy” non-CF children. The values obtained from the subjects with CF had a broader range with more than 80% of the control group values above the upper limit, relative to control group data. There was significant negative correlation between LCI and FEV1 values. There were differences between the control and CF cohorts in several areas as can be seen from the data in Table 1. Within the control subjects, twice as many female subjects participated, while the gender divide was more evenly split in the group with CF. Differences also occurred in the age profiles, which was positively skewed for the control group, with 50% of the control cohort aged 4 – 6.8 years, with the oldest in the control group being 11.9. The age profile for the group with CF was more normally distributed, with ages ranging from 5.6 to 18.4 years. The majority of subjects for each cohort, control and CF, successfully completed the washout procedure. The older subjects seemed to perform the procedure with more ease once they could view the on-screen display of the washout. Though the study was not designed to pick up variation within the feasibility of subgroups, it was noted that the children with CF under six years of age struggled to perform the washout in a technically correct manner, which can be also observed in similar studies17. The biggest challenge for younger patients was to stay still during the washout and to keep a tight seal between the lips and the mouth piece. It may be possible to improve performance in this younger cohort by using a face mask applied to the nose and mouth18.

The time required to perform a washout and associated procedures (weight and height measurements) was between 30 to 45 minutes, and it is likely that this time could be reduced to 20 minutes or even less. This could be achieved by reducing the number of acceptable trials from three to two17. A previous study19 proposed using an end point of 1/20th of the initial gas concentration instead of the 1/40th which could reduce the time required for the procedure and in turn increase the likelihood of technically acceptable trial. However, more recent studies show that the increase of the cut-off point will result in the lower discriminative power for detection of ventilation inhomogeneity, which results in less sensitive MBW washout20. We observed a clear learning effect, with improved technique and shorter testing times on repeat visits. More than half of the subjects from CF cohort performed the MBW test twice on two different occasions. We noticed that as the child got more familiar with the test and the operator has established baseline LCI value for the tested subject, the time of the MBW test could be possibly reduced on some occasions to only one trial (especially for older subjects). Shorter testing times would be beneficial in tracking LCI over a longer term and make it more feasible in monitoring the progression or exacerbations. In addition to this, there is also scope for further study on the feasibility of using the LCI in adult patients with CF.

A limitation of our study is the relative paucity of controls in the older age groups. In the preschool age range (<6 years of age) it has been reported that the LCI decreases slightly with increasing age, however this is not as prominent in older school children (6 to 19 years of age)22. The LCI control values obtained here were in line with control values from similar studies10, within a relatively narrow range. Multiple studies demonstrate that the LCI is stable across all age groups both in cross-section and longitudinal assessments from pre-school, to school age, teenage years and adulthood (independent of health centre)8-10. The lung clearance index is a tool with potential for detection of early CF lung disease. It is postulate that narrowing of small airways caused by inflammation and obstruction results in elevated LCI values. A longitudinal study in a Swiss population demonstrated that LCI was the first value to become abnormal, followed by FEF50, FVC and finally FEV112. LCI has been a primary outcome measure in CF clinical trials such as the phase 2 trial of ivacaftor in a multicentre study13 and the single centre interventional study of rhDNase and hypertonic saline in infants and children with CF14-16. Its clinical application and feasibility for use in CF clinics are current focus of assessment17-18.

Though this technique has shown great promise, the limitations have also been identified. Oxygen though readily available has been observed to alter the breathing pattern of infants21 and it is not known at what point that interaction stops. Some variation between tests for subjects has been reported18. Regular breathing pattern must be maintained throughout wash-out phase and operator must be vigilant in monitoring all aspects of the test that may affect results. This study demonstrates that LCI, used for the first time in an Irish Paediatric CF population, has excellent ability to discriminate between health and disease, to correlate with disease severity, and to detect early CF lung disease when standard techniques such as FEV1 remain within the normal range. Although more time consuming than spirometry, LCI has the potential be incorporated into a busy clinical setting, particularly with further refinements in technique.

Acknowledgements
The authors acknowledge the generous support of TLC4CF who donated the Exhalyzer D to the Paediatric CF unit at UHL. We would like to thank all the parents and children who took part in this study.

Conflict of Interest
This statement is to certify that all authors have seen and approved the manuscript being submitted. We declare that there is no conflict of interest. We warrant that the article is the authors' original work. We warrant that the article has not received prior publication and is not under consideration for publication elsewhere.