We identified three infants with dilated cardiomyopathy (DCM) secondary to severe vitamin D deficieny and hypocalcaemia. All infants were exclusively breast fed, from dark skinned ethnic backgrounds, born and living in Ireland. None of these pregnant mothers or infants received the recommended vitamin D supplementation. Each infant presented in heart failure and required inotropic support as well as calcium and vitamin D replacement. Cardiac function subsequently improved. This highlights the public health issue that many high risk pregnant mothers and infants are not receiving the recommended vitamin D supplementation.

The primary source of vitamin D is sunlight, though it can also be derived from dietary sources. Vitamin D synthesis depends on factors such as the amount and duration of exposed skin, skin type, sunscreen, latitude and cloud cover. Vitamin D synthesis is reduced by melanin and is more efficient in pale skin than darker skin. Women from sunny climates who cover their faces and hands are at high risk of vitamin D deficiency1. Therefore people from dark skinned ethnic backgrounds living in Ireland at high latitude, with minimal sunlight exposure are at high risk of vitamin D deficiency. Vitamin D deficiency is determined as 25(OH) D3 levels <30 nmol/L and insufficiency as 25(OH) D3 levels 30-50 nmol/L2 . Vitamin D has vital roles in bone health and cell growth. The active hormone, calcitriol regulates calcium, an essential ion for cell function. Vitamin D deficiency and hypocalcaemia can lead to DCM, rickets, myopathy, tetany, osteomalacia and seizures.

We identified three infants over a 9-year period with DCM secondary to vitamin D deficiency and hypocalcaemia who presented in cardiac failure (Table 1). Each infant was exclusively breast fed and from a dark skinned ethnic background. None of the infants or their mothers during pregnancy had received the recommended vitamin D supplementation. 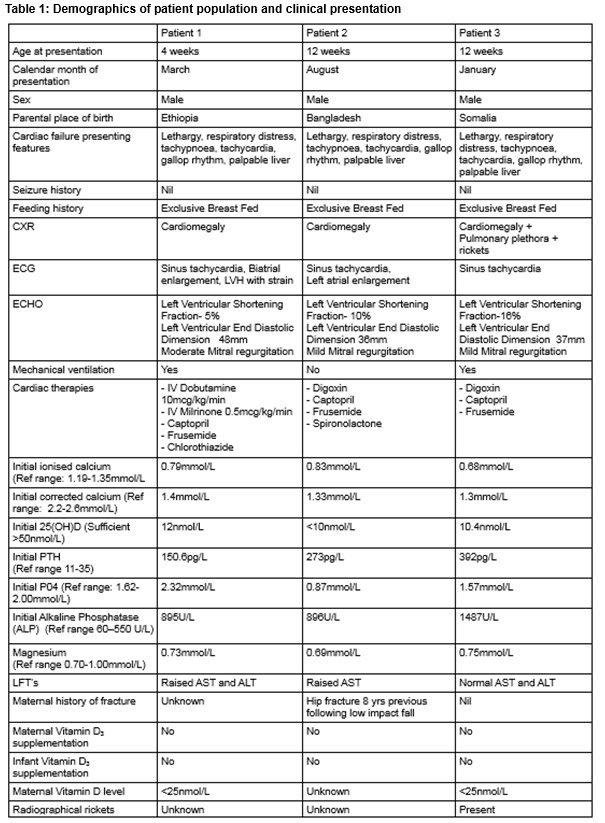 The echocardiography of each infant demonstrated a dilated left ventricular (LV) cavity with markedly reduced LV systolic function. The median LV shortening fraction measured 10% (5-16%). Each infant received a combination of diuretics, angiotensin converting enzyme inhibitors (captopril) and cardiac glycosides (digoxin). One infant initially required intravenous (IV) inotropic support. Each infant required IV calcium for up to 5 days with subsequent oral calcium treatment. They were all treated with oral vitamin D for between 6 and 12 months. Following 6 months of vitamin D and calcium replacement, the LV shortening fraction normalised to a median of 37% (34-41%) and they were all subsequently weaned off inotropic support (Fig1).

A 2008 case series from England identified 16 breast-fed infants (3 weeks-8 months) with heart failure secondary to vitamin D deficiency and hypocalcaemia, all from dark skinned ethnic backgrounds3. Three of these infants died. None of the pregnant mothers and no infants had received the recommended vitamin D supplementation. Shortening fraction normalised at a mean of 12.4 months on vitamin D and calcium replacement, longer than in our report. 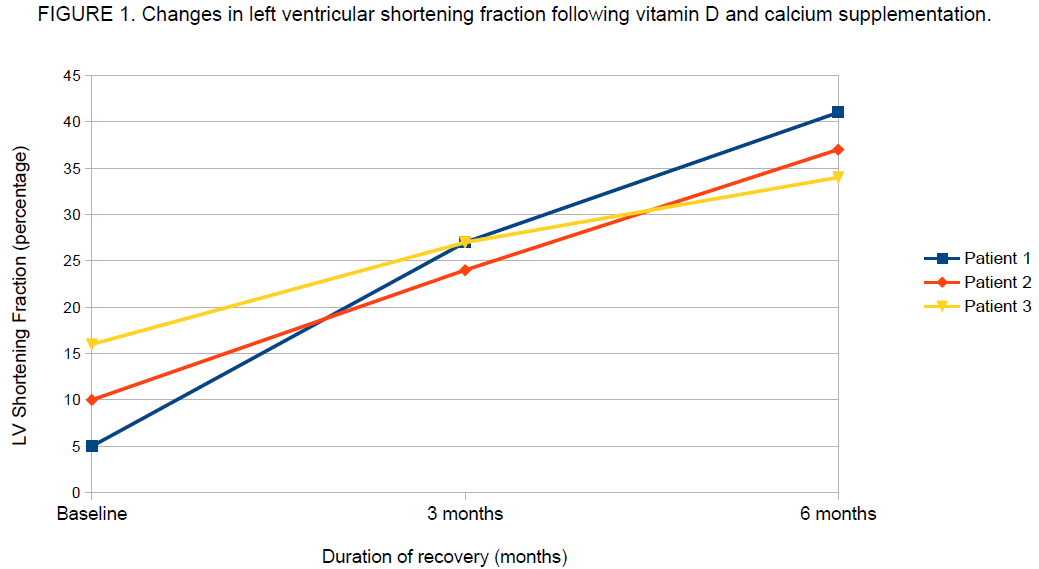 These three infants had DCM secondary to severe vitamin D deficiency and hypocalcaemia. This sends a public health message to healthcare professionals about the importance of supplementing all pregnant mothers and infants up to 12 months. This message should be emphasised, in appropriate languages, to those at high risk of vitamin D deficiency such as dark-skinned mothers with limited sunlight exposure.

There are no conflicts of interest in this paper.

The families of each patient were contacted, and written informed consent was obtained from each family.

6. Hogler W., Complications of vitamin D deficiency from the foetus to the infant: One cause, one prevention, but who's responsibility? Best Practice & Research Clinical Endocrinology & Metabolism 29 (2015) 385e398