Growing Old in the Emergency Department

The research team were concerned that older patients requiring emergency admission seemed to wait longer for a hospital bed, and as such were disproportionately affected by Emergency Department overcrowding. To investigate this theory and explore any changes over time, a ten year dataset (2005-2014 inclusive) was extracted from the information systems at Beaumont Hospital, Dublin. This research examines the changing age profile of ED patients, identifies the relationship between age and the total time spent in the Emergency Department (Patient Experience Time (PET)), and examines the public belief that EDs are busiest in winter when reports of overcrowding and elderly patients waiting on trolleys get most media attention. The results highlight that the ED is busy all year round (but for different seasonal reasons) and point to an overdue need to plan for the current and future healthcare of older patients within and beyond acute hospitals.

The Emergency Department (ED) at Beaumont Hospital receives over 50,000 patient attendances per annum and is consistently amongst the most overcrowded in the country1,2. One of the many contributing factors to the ED workload is that the population of the catchment area is significantly older than the national average. Data from the 2011 census3 shows that in the Dublin North Central region, 18% of the population is over 65 years of age as compared to a national average of 12%. Older patients can present specific challenges for ED care, including: a higher prevalence of cognitive disorders4, multiple co-morbidities and atypical symptoms5 and they are more likely to be admitted with disproportionate time boarding in the ED6-8. Given that the OECD predicts that the percentage of over 65 year olds in Ireland will go to 26% by 20509, the care requirements of elderly patients will need to feature heavily in health care planning processes, along with and as part of the need to streamline hospital processes (e.g. managing discharges and increasing day cases) and integrate effective community care initiatives as noted in other reports10.

A widespread public perception is that Emergency Departments (EDs) are busiest in the winter months. Frail and elderly members of the population can be more susceptible to winter ailments and suffer more adverse effects which may require emergency care. Media headlines such as “551 people on hospital trolleys as flu outbreak worsens”11and “Rise in flu pushes A&E trolley crisis back to the brink”12 tend to fuel and validate the perceived impact of seasonal ailments on ED crowding. Healthcare professionals working in EDs however say that they are busy all year round with little or no reprieve during the summer months. Misconceptions about underlying trends and behaviours can lead to poor decision making at all levels, from local management to governmental, and consequently result in inefficient use of budgets and resources. Consequently, well-intentioned changes may not deliver expected results, for instance it has been shown that adding extra beds in the ED can actually make problems worse depending on circumstances13. To help better inform decision making, the age and seasonal profile of ED attendances over a 10-year period were examined.

Methods
A 10-year dataset (2005-2014 inclusive) was extracted from the ED Oracle database at Beaumont Hospital, Dublin. The data was first filtered for erroneous records (found to represent 0.3% of the original dataset). These errors predominately related to timestamp discrepancies (e.g. discharge before registration). Additionally, any records associated with scheduled review visits to the Acute Medical Assessment Unit (AMAU) were omitted. By comparing timestamps (points in time in a patient’s journey through the Emergency Department) , the following waiting times were calculated: patient experience time (time from arrival to admission to a ward bed or discharge from the ED), time to first medical (time to see a medical professional) and the time from bed request to admission (the time from when the on-call team request a ward bed until the patient goes to the ward). Finally the number of patients in the ED per hour was calculated. Descriptive statistics were used to describe the key waiting variables and independent sample t-tests were used to compare mean waiting times across groups. Linear regression was applied to the 2013 data (n=51,027 patient visits) to examine the relationship between age and time spent in the ED. Three separate models were developed with ‘PET’,‘Time to first medical’ and ‘Time from bed request to admission’ as the dependent variables. These models also controlled for the following variables: gender, triage category (included as a series of dummy variables, with the yellow triage category set as default), patient admitted to hospital (Yes/No) and the number of patients in the ED (number in system). Before running the regression, a log transform was performed on PET as the variable was highly skewed. 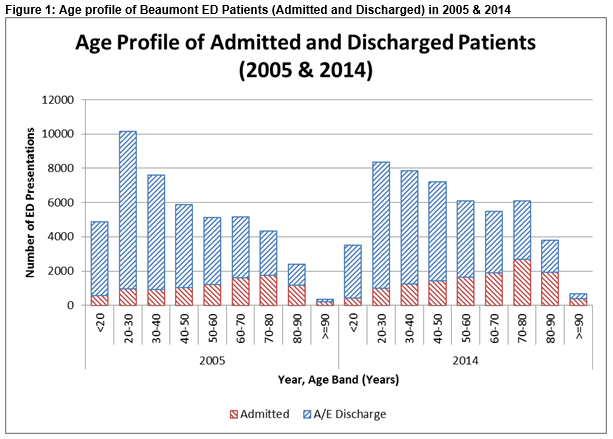 Results
The number of ED attendances per annum has grown from 48,000 in 2005 to over 51,000 in 2014 (a 7% increase in demand). In addition, the acuity of care required has changed even more significantly in that time. The establishment of other care services in the community to deal with relatively minor ailments (e.g. VHI Swiftcare and D-Doc) has dealt with many patients that would otherwise have attended the ED. This can be seen in the respective reduction of 66% and 55% in Blue/ non urgent (category 5) and Green / routine (category 4) triage category arrivals at Beaumont ED from 2005 to 2014 where the same Manchester triage system has been in place over the time period.

This means that the overall growth in demand is driven predominantly by the more serious Yellow / urgent (triage category 3) and Orange / very urgent (triage category 2) categories that have grown by 40% and 58% respectively. Accordingly the number of ED patients requiring admission has grown from 9,000 in 2005 to over 12,000 in 2014. In the ten year period covered, the mean age of the ED patients has shown a statistically significant increase (t=95.0,p<.001) from 43.8 years to 48.2 years, with the percentage in over 65 years age group increasing from 20.8% to 27%. Conversely, there is a drop in the number of 20 to 30-year-olds attending which may be attributed to emigration and to the community care options noted above. This is significant as older patients have a greater likelihood of admission to the hospital. Figure 1 illustrates this change in the age profile of patients where substantial increases in older patient cohorts can be seen. 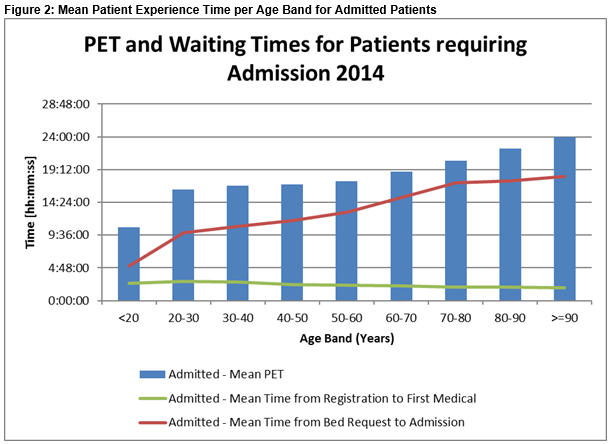 In the three regression analyses age accounted for a statistically significant amount of the variation in waiting times, when controlling for other key factors. From Table 1 it is apparent that age has a significant (β = .086, p<.001) impact on PET with a 0.5% increase per year which equates to approximately a half an hour PET increase for every 10-year increase in patient age. The independent variables included in this model explained a satisfactory 48% (r = .484) of the variation in the dependent variable and all variables included were statistically significant. The variable “admitted to hospital” has the largest impact on PET (β = .426). Of the other variables, the number in the system has not surprisingly a significant positive effect on time to discharge. An increase of one patient in the system increases the time waiting by one percent. With regard to total patient experience time, there are significant differences between different triage categories with patients in the Orange Triage facing the longest waits followed by Yellow, Red, Green and Blue respectively. Finally, gender has a relatively small impact on time to discharge, with males waiting more time on average. However, while statistically significant, this difference is too small to be regarded as practically significant. 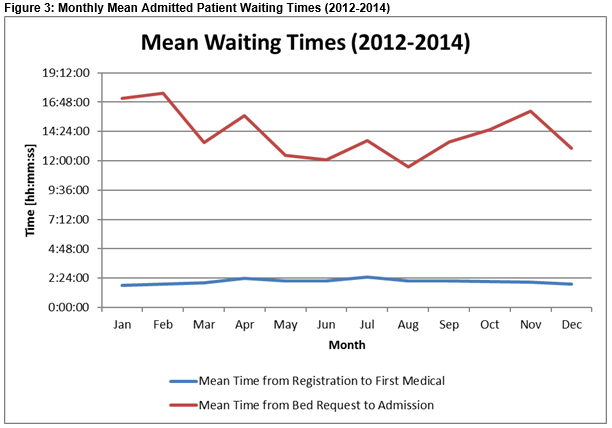 In Models two and three, representing the component waiting times within PET, contrasting effects of age were witnessed. Age had a negative effect on waiting times for time to first medical (β= -.005, p<.001), meaning older patients wait on average less time to see an Emergency Department doctor than younger patients. Significantly longer waiting times from bed request to hospital admission (β= .105, p<.001) were identified for older patients. Figure 2 illustrates the magnitude of these effects on the waiting times of patients requiring admission.

An examination of the monthly data for the years 2012 to 2014 indicated a number of seasonal variations. The number of patients presenting to the ED was highest in the summer months. However, the number requiring admission remains relatively constant throughout the year. As illustrated in Figure 3, waiting times for beds are significantly higher over the winter (p=.001), but in contrast waiting times to first medical are significantly (p<.001) higher in summer. The former may be due to the older cohort of patients in winter. Patients in December, January and February were found to be an average of 1.5 years older (t=20.7, p<.001) than the average for the rest of the year. The increased number of attendances in summer accounts for the time to first medical being longer.

Discussion
While the care given by the external services introduced over the last ten years is welcome and prevents many younger patients with minor ailments from entering the ED, it has done little to improve the overcrowding crisis as this crisis is overwhelmingly driven by admitted patients being boarded in the ED whilst waiting for hospital ward beds. Amongst those waiting for beds, the elderly have been shown to wait longer. Older patients do have higher admission rates and although the mean age of patients does increase in winter, the demand for beds from the ED is relatively constant throughout the year. This raises questions as to why age has such a significant effect on patient experience time in the ED and suggests that the overcrowding crisis that manifests in the ED is dependent on the planning of activities (particularly the care of older patients) in other areas of the hospital and wider health care system. It is also indicative of the fact that elderly patients with complex care needs are harder to find ward beds for because specialty wards are concerned about the bed base being used for patients with an increased likelihood of complex discharge planning needs. Patients with protracted hospital stays in turn mean that wards are not in a position to provide those beds for planned care requirements. In short, hospital wards cherry pick the younger patient who is likely to have a shorter hospital stay with the result that the elderly wait longer in the Emergency Department. In real terms this means that not only is the Emergency Department crowded but it is crowded with elderly patients with complex care needs and significant morbidity which creates a huge additional workload for the emergency medical nursing staff and in turn means they are not available for the newly arriving patients experiencing an emergency.

From an international perspective, older people have been found to wait longer to see an ED doctor in Paris14 and in Sheffield15, while in Burbank, California16, the older people requiring admission to hospital had a shorter stay in ED than their younger counterparts. So for both these measures, converse relationships to those presented in this paper are seen. However in Taiwan16, the average age of those with longer (>72h) and shorter stays in the ED was described as similar and not found to be significant. The research presented provides evidence that the “overcrowding crisis” and other challenges associated with the provision of emergency care need to be carefully distinguished and tackled accordingly. For instance, the ED needs to be resourced to deal with increased demand as evidenced by more elderly and sicker patients attending while the hospital needs to prevent “Exit Block” so as to allow patients timely access to a ward bed and in turn alternate care settings need to be available for those patients who have completed their acute hospital stay but who are unable to be discharged to their own homes. With similar trends seen in 20087 and a confirmed ageing national population in Ireland, this research emphasises an overdue need to plan for the current and future healthcare needs of elderly patients within and beyond acute hospitals.

Conflict of Interest
The authors have no conflict of interest to declare.