Hepatitis E virus (HEV) is a single stranded RNA virus causing infection worldwide. In developing countries HEV genotypes 1 and 2 spread faeco-orally via water. Recently, infections with HEV have been detected in Europe and North America in patients with no travel history. These are food-borne HEV genotypes 3 and 4, a pig-associated zoonosis. Most infections are asymptomatic but morbidity and chronic infection may occur with prior liver disease or immunosuppression. International seroprevalence rates vary and with improved diagnostics have increased. To determine the current prevalence in this region we studied anonymised serum samples submitted in 2015 for routine testing. We detected anti-HEV IgG in 16/198 (8%) individuals, highest rate in 40-59 year olds (43.8%). This is higher than reported for the same region in 1995 (0.4%) using a previous generation assay. This study provides evidence of HEV circulation in Ireland and reinforces the need for ongoing surveillance.

HEV is a non-enveloped RNA virus which can be classified into 4 genotypes (1-4) that infect humans which all share the same serotype. It is probably the most common cause of acute viral hepatitis in the world1. HEV genotypes 1 and 2 are endemic in parts of the developing world such as Asia, Africa, and South America. Transmission is faecal-oral and usually occurs via contaminated water supplies. Infection with these genotypes is characterised by an acute self-limiting hepatitis but can have a more aggressive course in pregnant women, where it has a 20-25% mortality rate in the 3rd trimester1. HEV genotypes 3 and 4 are found in developed countries and are associated with different epidemiology and disease manifestations. In Europe, HEV genotype 3 is the most commonly reported1 where most cases are autochthonous (locally acquired) and sporadic. The reservoirs of infection are thought to be mammalian hosts such as pigs, wild boars, rabbits and deer with transmission to humans via the consumption of raw or undercooked meat from these animals i.e. pork and game products. Symptomatic disease is usually a mild and self-limiting hepatitis however most cases of infection are asymptomatic and therefore go unrecognised. The increased mortality in pregnancy characteristic of infection with genotypes 1 and 2 is not seen but hepatic decompensation and progression to fulminant hepatic failure in those with pre-existing chronic liver disease occurs with all genotypes of HEV1.

In contrast to infection with HEV genotypes 1 and 2, chronic infection with genotype 3 can develop. Groups at risk are those post solid-organ transplant, or allogeneic stem cell transplant, with haematological malignancies or HIV1. In addition a wide range of extrahepatic manifestations have been described with all genotypes of HEV. These include pancreatitis, neurological syndromes such as Guillain Barré Syndrome, neuralgic amyotrophy, transverse myelitis, and renal and haematological disorders2. Diagnosis of HEV infection is primarily by use of serology, but virus can also be detected in blood or faeces. Following an incubation period of 2-8 weeks anti-HEV IgM as a marker of acute infection is usually present on clinical presentation. Anti-HEV IgG is produced after anti-HEV IgM but is usually also present in rising titres on presentation and persists for many years1.

Some published seroprevalence studies of Anti-HEV IgG positivity in populations are likely to be underestimates as they rely on serological assays with poor sensitivity3. One currently available commercial assay shows enhanced sensitivity for the detection of Anti-HEV IgG and can detect its presence for a longer period of time after the initial infection. Seroprevalence in blood donors in SW France was first reported as 16.6%3. Using a different assay (Wantai HEV-IgG ELISA, Beijing Wantai Biologic Pharmacy Enterprise, People’s Republic of China) a rate of 52.2% was found in the same population4. Similarly other regions in Europe have found higher prevalence rates using these improved assays. This evidence along with the advent of modern molecular techniques that have successfully identified the circulating strain as genotype 3, have led to the recognition that HEV is indigenous to Europe. While the most frequent mode of transmission is foodborne, because viraemia occurs in asymptomatic infection, HEV can also be transmitted via blood transfusion. A study in England reported detecting HEV RNA in 1/2848 blood donations with a transmission rate of 42% on follow-up of recipients5. Consequently, molecular testing for HEV has been introduced within the blood banking environment6. Twenty years ago, Hepatitis E antibodies were found in only 0.4% of antenatal patients in our population7. Given the increasing recognition of morbidity associated with HEV infection, and the availability of newer more sensitive serological assays, we sought to determine the current prevalence of Hepatitis E antibodies in our region.

This was a retrospective study in which an age and location stratified (approximately 25% in each of the four age groups 1-19, 20-39, 40-59, >60, 50% city and 50% county address), sex matched sample of 198 sera sent was randomly selected from samples submitted in January-June 2015 to Cork University Hospital Microbiology laboratory for routine diagnostic antibody testing from outpatients/general practitioners. Known HIV-positive and transplant patients were excluded and samples were then anonymised so diagnostic information on liver function was not available. The samples were anonymised and recoded with age in years, sex and address assigned to city or county categories. Hepatitis E IgG antibody was detected with the Wantai HEV-IgG ELISA assay (from Fortress Diagnostics, Antrim, Northern Ireland) according to the manufacturer’s instructions. Data was collected and analysed using MS Excel 2010 and IBM SPSS (version 20). Descriptive statistics were used. A p value of <0.05 was considered statistically significant. The study was approved by the Clinical Research Ethics Committee of the Cork Teaching Hospitals. 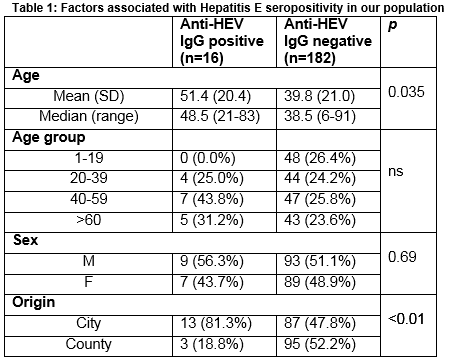 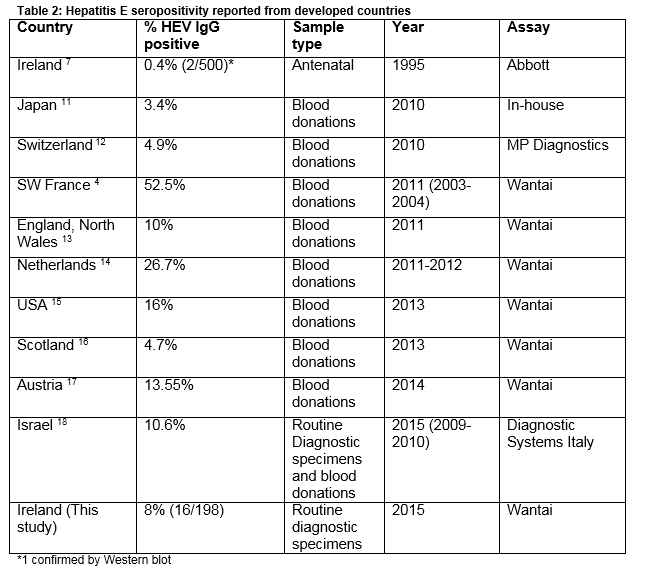 The rate of seropositivity for Hepatitis E found in this study (8%), is higher than previously reported in this region7. A study in 1994 on 500 antenatal samples from this region detected anti-HEV IgG in 2 patients (0.4%) 7. Of 100 patients with acute hepatitis who were hepatitis A and B antibody negative, four (4%) had Hepatitis E antibody7. In 1994, Hepatitis IgG was detected in none of 45 samples from haemodialysis patient tested from around Ireland8. This increase over 20 years probably reflects enhanced sensitivity of modern assays rather than a true increase in prevalence. The Wantai assay used in this study has been validated for the detection of Hepatitis E IgG genotype 3 and has been employed in many different countries allowing international comparability 3 (Table 2). Recent reports from 9 developed countries (Table 2) (median seroprevalence 10.6 %, range 3.4-52.5%, IQR 4.8%-21.35%), show the current seroprevalence we have found in Ireland is not an outlier. Developing countries with high endemicity such as Nepal and Bangladesh have rates of 47.1% and 49.8% respectively9. In Europe where genotype 3 predominates, the highest rates have been reported from blood donors in the South West region of France (52.2%, Table 2). This is thought to reflect local dietary practice involving the consumption of raw and undercooked pork and game products. The role of diet as a risk factor for HEV infection in England and Wales was examined in a case control study. It found that the consumption of pork pie and ham and sausages from a major UK supermarket chain was significantly associated with indigenous infection10.

Similar to other studies listed above we found no significant difference in seroprevalence rates between genders. This is in contrast to the higher rates of overt clinical disease manifesting as acute hepatitis seen in older males1. We were unable to show a significant difference in seropositivity between the various age groups examined, but 12/16 (75%) of our positive samples were from patients aged >40 years. This increase in seropositivity with age has also been shown in other studies. HEV infection is currently occurring in Ireland: the Irish Blood Transfusion Service reported detection of Hepatitis E virus in approximately 1 in 5,000 healthy donors tested in 2014 and has implemented HEV RNA screening of blood donations19. The absence of any positives in the 1-19 year old age group in our study is striking. Recently published seroprevalence studies looked at blood donations which would exclude this age group - as a result comparative epidemiological data on HEV infection in this age group is limited. However, one study from England found evidence of past infection in <5 % of samples for this age group in both 1991 and 200420. We found significantly higher number of HEV IgG positive results from samples coded with a city address (81.3% v. 18.7% p=<0.01). Patients with HEV infection in SW England were more likely to live within 2 km of the coast21. A proportion of our urban patients would be resident within this distance of Cork Harbour. As HEV has been detected in shellfish and in seawater, this association may relate to increased consumption of shellfish or involvement in recreational water activities22. A higher prevalence of HEV has been reported in populations with more frequent animal contact such as pig farmers, veterinarians and some pet owners23, but our study does not include this demographic data. A study published by an Irish veterinary group this year reported antibodies to HEV in 89/330 (27%) pigs in 13 (81%) herds tested using the assay Prio-CHECK HEV Ab porcine ELISA24.

The seroprevalence as outlined here is comparable with other European countries where autochthonous Hepatitis E virus infection is occurring and where infection with circulating virus has been detected in blood donors. Our data supports the testing for acute hepatitis E (anti-hepatitis E IgM) in all cases of unexplained acute hepatitis in Ireland with or without a history of foreign travel. Of note, the National Virus Reference Laboratory has added Hepatitis E IgM to the panel of routine diagnostic tests for acute hepatitis, with HEV RNA testing for IgM positives. A national programme of blood donation testing was introduced in January 2016 to ensure the safety of blood products. Immunocompromised patients such as transplant recipients, both solid organ and allogeneic stem cell, as well as patients with haematological malignancies and HIV patients with low CD4 counts, are at risk for chronic HEV infection. Hepatitis E should be considered as a cause for abnormal liver function tests in these patients. In December 2015 Hepatitis E was added to the list of notifiable diseases in Ireland25.

This study was approved by the Clinical Research Ethics Committee of the Cork Teaching Hospitals. We thank CSTAR UCD for statistical advice and Dr O. Crosbie and Dr S. O’Mahony for critical reading of this manuscript.