Hip Fracture and the Weekend Effect in an Irish Trauma Hospital

Aims
We examined the relationship between the 1-year mortality (OYM) rate and (i) those admitted at the weekend, (ii) those who underwent surgery at the weekend and (iii) those admitted during the NCHD changeover months (January & July) for the management of hip fracture in Tallaght University Hospital (TUH).
Methods
Admissions to TUH (2013 - 2016) with hip fracture (> 60 years old) were retrospectively examined. Data from the Irish Deaths and Events Registry was analysed to identify death events at 1 year. Logistic regression analysis was performed with respect to OYM with the three variables above.
Results
646 hip fracture patients were admitted (2013 – 2016). 178 (27.5%) were weekend admissions, 183 (28.4%) underwent weekend surgery and 93 patients (14.4%) were admitted during NCHD changeover months. There was no significant relationship between OYM and (i) weekend admission, (ii) weekend surgery or (iii) changeover admission in TUH.
Conclusion
This study offers the first examination of the weekend effect on fragility hip fractures and mortality in Irish patients and reports no significant weekend effect regarding 1-year mortality in this hip fracture cohort.

Introduction
Hip fractures represent one of the most common presentations to hospital of older patients (~3,600 per annum in Ireland1). Such patients form a uniquely vulnerable group within our healthcare system. Traditionally, orthopaedic trainees are taught that the OYM rate in this fragile population are ~30% at 1 year2. More recently, it was shown that this figure may be outdated and that 22% may be a more accurate, up-to-date estimation of OYM post fragility hip fracture3. Older patients with hip fractures present a significant challenge to Western healthcare systems. The oncoming “silver tsunami” of an increasing older population, both in terms of proportion and number, will see this issue only increase in scale and cost, both financial (estimated ~€14,400 per hip fracture4) and human. Eliciting the factors responsible for suboptimal outcomes in such patients is of critical importance to operate an efficient, excellent health service.

There are a number of national hip fracture registries5 which continuously collect and publish data in order to optimise delivery of care to those which suffer fragility hip fracture. In 2012, the Irish Hip Fracture Database was launched6 and publishes a national report annually which helps to measure, compare and improve the national hip fracture service delivery and outcomes. There have been 2 recent studies reporting improvements in 30-day mortality post hip fracture stemming from data collected by the National Hip Fracture Database in the United Kingdom. In 2015, a research group published data7 which suggested a significant improvement in 30-day mortality following the launch of a national clinician-led audit initiative. In 2017, the same group identified a significant and robust association between increased hours worked by orthogeriatricians and a reduction in 30-day mortality8.

Weekend admissions have previously been hypothesised to be an independent risk factor for increased patient mortality9. This phenomenon has been termed the “weekend effect” in the literature. It is of particular interest and debate in the UK as the National Health Service (NHS) introduces measures to implement their “seven day services” policy10. The intersection between the weekend effect and fragility hip fractures mortality has been examined in the internationally published literature.  Since 2012, there have been 9 large studies examining the weekend effect and mortality in the fragility hip fracture cohort.

To our knowledge, the relationship between OYM and weekend admission/surgery and NCHD changeover admission has not been examined in Irish patients with respect to fragility hip fractures. We outline our findings in this paper.

Access to the Irish Deaths and Events Registry was granted by the Department of Public Expenditure and Reform. Information from the registry was correlated with the local hospital information management software to establish death events at 1 year.

Univariate logistic regression analysis was performed on mortality at 1-year with three variables: (i) weekend admission, (ii) weekend surgery and (iii) admission during a NCHD changeover period. For analysis we used Stata SE (version 13, College Station Texas for PC) with a predetermined significance level of 0.05.

Results
646 patients were admitted to Tallaght University Hospital with a single fragility hip fracture over a 4 year period (2013-2016) and are included in this study. 68% of the cohort were female (Table 1), 70% of patients were aged between 70-89 years of age (total range 60-101 years) and 76% of the cohort were admitted directly from their homes. 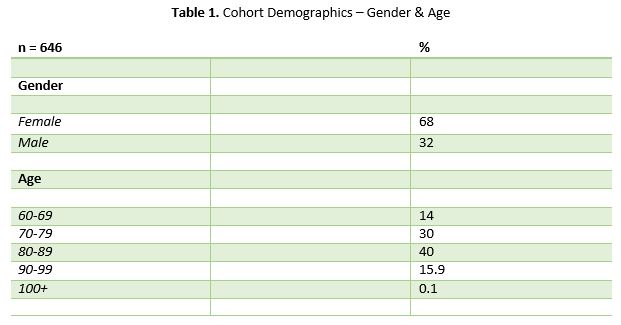 The strengths of our study include its access to the Irish Deaths Registry to follow patients to the one-year mortality endpoint. To our knowledge, we offer the first examination of the weekend effect on fragility hip fractures in an Irish population. Furthermore our findings are validated by other studies.

The limitations of our study include its sample size, study design and single centre. Retrospective studies such as this are also subject to bias and limited in the data available. Whilst our study incorporates the work of multiple surgeons, it relies on the activity of a single centre. There may be vast differences in the health status/ASA gradings of patients in different hospital catchment areas across Ireland. The average 80 year old patient in Dublin may not be comparable to the average 80 year old patient in Donegal. Provision of out-of-hospital care may vary widely and optimisation of such patients for surgery may be more or less complex when they reach hospital.

A Canadian study11 published in 2001 is one of the most-cited early studies on the weekend effect. This group investigated the relationship between weekend admission and mortality in the top 100 leading causes of death. Whilst this group showed increased mortality for weekend admissions and a number of conditions (including ruptured abdominal aortic aneurysm, acute epiglottitis and pulmonary embolism), there was no significant difference in mortality regarding hip fracture patients (n ~ 60,000).

More recently, 2 research groups undertook separate retrospective studies12,13 investigating the weekend effect and mortality following hip fracture (n = 25,305 & 2989). Whilst these groups did not establish increased long term mortality rates (1-year), they both reported increased short term (30-day) mortality risk for all hip fracture patients (OR 1.4; p = 0.032 & OR 1.13; p < 0.05 respectively). On the same subject of 30-day mortality however, a British group14 recently investigated the effect of hip fracture and 30-day mortality and found no difference between those admitted on the weekdays vs. the weekends (n = 52,599).

Interestingly, a large American study19 (n = 344,989) reported statistically significant decreased short term mortality in those admitted at the weekend versus the weekday (OR 0.94, 95% CI 0.89 – 0.99). Such a study offers an unusual new paradigm for the weekend effect and piques interest in what may be the hidden benefits of the same.

More studies which specifically investigate hip fracture mortality and weekend surgery/admission during NCHD changeover months would be welcomed. The OYMs in TUH are inline with international standards.

In conclusion, the weekend effect should be taken to represent a complex constellation of factors, including limited availability of experienced staff, surgeon fatigue and reduced availability of resources in hospital. Eliciting and eliminating the negative factors behind our weekend services is required to optimise outcome, rather than simplistic comparison of opening hours and availability akin to commercial retail and business services. Nonetheless, to our knowledge this study offers the first examination of the weekend effect on fragility hip fractures of Irish patients. We demonstrate that in our institution, there is no evidence of any weekend effect on OYM.