Little data is available on the resource utilisation of patients admitted with Community-Acquired Pneumonia (CAP) in Ireland. A retrospective review of 50 randomly-selected patients admitted to Beaumont Hospital with CAP was undertaken. The mean length of stay of patients with CAP was 12 days (+/- 16 days). All patients were emergency admissions, all had a chest x-ray, a C-reactive protein blood test, and occupied a public bed at some point during admission. Common antimicrobial therapies were intravenous (IV) amoxicillin/clavulanic acid and oral clarithromycin; 60% received physiotherapy. The estimated mean cost of CAP per patient was €14,802.17. Costs arising from admission to hospital with CAP are substantial, but efforts can be undertaken to ensure that resources are used efficiently to improve patient care such as discharge planning and fewer in-hospital ward transfers.

Introduction
Community-Acquired Pneumonia (CAP) is a major cause of morbidity and mortality and remains a significant clinical and economic burden in Europe1,2. Pneumonia costs approximately €10.1 billion annually in Europe with over half of those costs (approximately €5.7 billion) associated with inpatient care3. Previous Irish research on CAP has focused on the effectiveness of interventions and education policies on improving the management of CAP in Irish hospitals4,5,6. However, there are no data on the healthcare costs of this condition in Ireland. It is unclear what variations there are in hospital stay, the investigations undertaken and variations in treatment. The aim of this retrospective study audit was to identify the resources used by patients with CAP during admission to Beaumont Hospital, the average length of stay, the financial burden of in-patient stay, and factors that might improve the quality of care.

Methods
The medical records of 50 randomly-selected patients discharged from Beaumont Hospital between January and May 2015 with a documented diagnosis of CAP, and where the medical notes were available, were retrospectively reviewed. Patients with CAP but who had been discharged within the previous 14 days from hospital were excluded7. Patients admitted with pneumonia who resided in long-term care facilities or community units were also excluded. The medical notes and coded information from the hospital inpatient enquiry (HIPE) database were the primary sources of information. Radiological evidence of CAP was obtained from a review of the hospital radiological records. Results of the Glasgow Coma Scale (GCS) of patients admitted to the Emergency Department (ED), the Modified Early Warning Score (MEWS) and the CURB-65 score, were collected from medical notes.8,9,10 Costing information was obtained from the Health Service Executive (https://www.hse.ie/eng/services), the Heath Information and Quality Authority (https://www.hiqa.ie/publications/health-technology-assessment-selective-bcg-vaccination-programme), the Department of Health (http://health.gov.ie/) and from other sources6. Costing information on antibiotics was sourced from Beaumont Hospital’s antimicrobial pharmacist. To calculate the estimated daily costs of antibiotics, dosage information was obtained from either the summary of product characteristics available on http://www.medicines.ie/ or from the Monthly Index of Medical Specialties (MIMS) November 2015. Only the overall length of time on antibiotics was captured. Therefore, for those patients who were administered two or more antibiotics during their admission, the combined average unit cost of the antibiotics was calculated and multiplied by the number of days on antibiotics. Data was processed and analysed using Microsoft Office Excel 2007. The mean, median, range and standard deviation values are presented where indicated. The two-tailed, two-sample equal variance students t-test was used to assess statistical significance where described.

Demographic information on admission
Details of 50 patients admitted with CAP are outlined in Table 1. Cardiovascular disease was the most common co-morbidity in 66% of cases (n=33) and 60% were smokers (n=30). 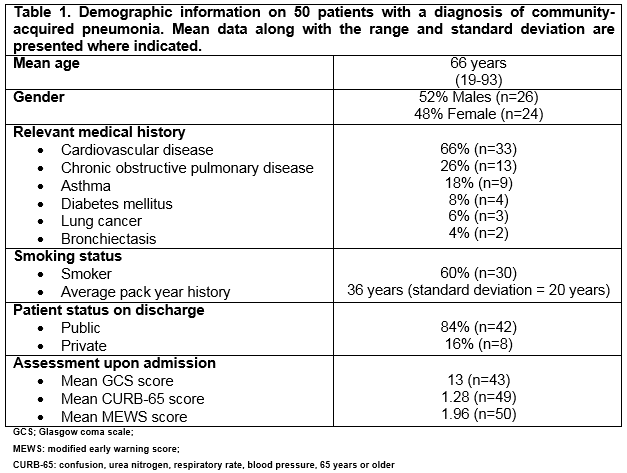 The mean length of stay (LOS) was 12 days. The majority of patients were admitted for less than 30 days (n=46) and for these patients the average LOS was 8 days (1-23 days). Four patients were admitted for more than 30 days and the longest admission (103 days) was that of a 64 year old male who developed a number of complications. All admissions were emergencies and all were admitted from home. There was an average of 1.78 consultants involved in the care of patients with CAP. Respiratory medicine was the most common discipline involved; 27 (54%) patients were seen by a consultant respiratory physician. Patients were also seen by or admitted under a consultant endocrinologists (n=18), rheumatologists (n=9), gastroenterologists (n=8) and infectious disease consultants (n=6). All patients occupied a public bed at some stage during their admission with the mean LOS there being 10.7 days (1-90 days). One patient occupied a critical care bed for 18 days, eight were admitted to coronary care unit beds and two to the intensive care unit (ICU) for 13 and 29 days, respectively. Patients moved wards in 90% of cases (n=45) and on average 1.6 times (1-7 times). Complications developed in 14% of cases (n=7), and two patients died (4%).

Investigations
All patients had a Chest X-Ray (CXR) on admission (Figure 1). The next most common investigation was an electrocardiography (ECG) which was done in 92% of cases (n=46). Ninety-eight percent of patients had a CXR within 24 hours of admission (n=49); 71% within four hours of admission with the mean interval being 3 hours and 32 minutes. Radiographic evidence of CAP was confirmed in 70% of cases (n=35) and unilateral pneumonia was the most common radiological feature identified (54%, n=27 cases). Follow-up radiology was conducted in 66% of cases (n=33), 20% within six weeks, the mean interval to repeat CXR being 103 days. Of those who had a follow-up CXR, 76% had full resolution (n=25/33). 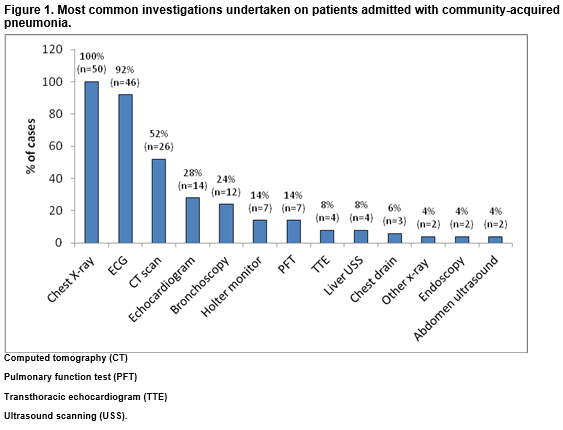 All patients had a C-Reactive Protein (CRP) and a full blood count (Figure 2). In 18% of cases, CAP was microbiologically confirmed (n=9). Urinary antigen tests for Streptococcus pneumoniae were conducted in 56% of cases (n=28) usually within the first 24 hours. Of these 29% were positive (n=8/28). 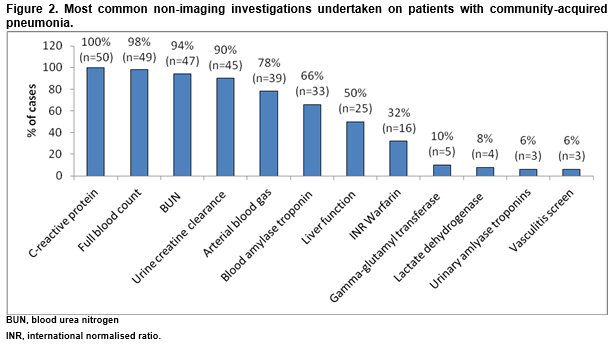 Discussion
This review assessed the clinical and financial burden posed by 50 patients with CAP discharged from Beaumont Hospital between January 2015 and the end of May 2015. The average LOS was 12 days and the average length of time from presentation in the ED to occupation of a bed was 1.3 days. It appears that a shortage of medical beds available in the hospital is the main reason for the delayed admission of patients. Common characteristics of the CAP cases were that all were emergency admissions, all were admitted from home, 90% moved wards at least once and all occupied a public bed at some stage.

Limitations to the study include its retrospective nature, the size of the study cohort, the fact that it was a single centre study, and that the costs are estimated and not actual calculated costs in real time. Additionally, we used documentation of CAP as an inclusion criterion, reflecting real practice but 30% of our cohort did not meet the National Institute for Health and Clinical Excellence (NICE) case definition of CAP11. We also did not record compliance with policies on the antimicrobial treatment of CAP which would be easier to carry out in a prospective study. Nonetheless, we believe that this study provides some indication of the resources consumed by this cohort of patients and where improvements can be made.

The most common investigations undertaken in the initial management were CXRs and CRP; 70% of cases had radiologically confirmed pneumonia. Urinary antigen tests were conducted in 56% of cases and 18% of cases of CAP were microbiologically confirmed with S. pneumoniae the most common infectious agent identified. The most common antibiotics administered were IV amoxicillin/clavulanic acid and oral clarithromycin. The average cost of patients with CAP was €14,802.17 per case but with a range of €900.95 to €142,888 for uncomplicated to complicated, lengthy admissions. A recent Irish study of the in-patient management of 32 patients with 42 episodes of febrile neutropenia found that the mean cost was €8,915, which mirrors our estimated cost for patients admitted for less than 30 days12. Further studies on healthcare costs for relatively common admission diagnoses are required to identify where cost savings may be made and how patient care can be improved.

The recent quality standard for CAP published by the NICE specify that patients should be treated with five days of antibiotics, a CXR be completed within four hours of hospital presentation and a mortality risk assessment be estimated using the CURB-65 score.12  Our patients had a mean IV antibiotic course of 7.7 days and a mean oral antibiotic course of 8.3 days, 71% of patients had a CXR within four hours of admission with the mean interval being 3 hours and 32 minutes and in 98% of cases a CURB-65 score was either recorded in the medical notes or could be calculated from the data gather upon admission. Therefore, there is potential to improve the quality of care according to NICE standards. This study provides important information on ways to optimise resources, e.g. reducing the duration of antibiotic courses. The data are also important for those with responsibility for implementing policy and optimising patient care. For example, discharge plans were developed in only 46% of cases. Discharge plans can help to optimise the use of hospital resources and contribute to reduced readmission rates but often a single person is designated responsible for coordinating discharge plans13. This is a major aspect of patient care highlighted by this study audit that could be improved.

Previous research from St Vincent’s University Hospital in Dublin has indicated that educational interventions and audits such as this study can significantly improve physicians’ adherence to hospital guidelines in the treatment of CAP5. This study will hopefully lead to larger prospective studies on resource utilisation and help improve patient care.

Declaration.
HH is in receipt of research funding from Astellas and has recently received lecture or other fees from Cepheid, Pall Medical, Pfizer and AstraZeneca