Impact of Introduction of a Clinical Pathway for the Management of Pyelonephritis on Obstetric Patients: a Quality Improvement Project

Aim
To determine whether the introduction of a clinical pathway for the treatment of pyelonephritis in obstetric patients would improve outcomes.
Methods
This was a retrospective study conducted in a maternity hospital using quantitative analysis methods. Patients who met laboratory and clinical criteria for pyelonephritis during data collection were included.
Results
The study included analysis of 23 patients pre-intervention and 19 post-intervention. Baseline and patient characteristics were similar for both groups. A statistically significant difference was seen in 3 of 7 outcome measures. Increased use of gentamicin (13% Vs 52% p=0.006), Increased number of renal ultrasounds (17% Vs 47%, p=0.04) and increased use of prophylaxis (21% Vs 68%, p=0.003). The proportion of patients receiving ≥ 10 days of IV antimicrobials decreased from 48% to 21% post-intervention (p=0.07).
Discussion
This study has shown that the introduction of a pathway for the treatment of pyelonephritis in pregnancy had a positive impact on several important clinical outcomes.

Introduction
Acute pyelonephritis is one of the most common medical complications of pregnancy. It occurs in 0.5–2% of pregnant women and can result in significant maternal and fetal morbidity1,2. Additionally there is a financial burden on the hospital due to prolonged inpatient stays, increased preterm birth rate and associated neonatal care 3. Although there have been many studies evaluating the benefit of treating asymptomatic bacteriuria to prevent pyelonephritis in pregnancy, there is little recent evidence around how to treat pyelonephritis in pregnancy 4-6. In 1995 a study was published which showed the benefit of ceftriaxone in pregnancy, when compared to cefazolin but did not address issues such as prophylaxis during the remaining pregnancy and need for additional gentamicin 7.

We introduced a clinical pathway to provide a standardised approach to the care of pregnant women with acute pyelonephritis (Figure 1). This pathway provided guidance on the total duration of treatment, addition of gentamicin, IV to oral switch, use of chemoprophylaxis and the need to consider ultrasonography (USS) of the urinary tract. The aim of this study was to assess the impact of this new clinical pathway on important clinical outcomes including length of treatment, readmission rates, intravenous to oral switch, addition of gentamicin, renal investigations and prescribing of chemoprophylaxis. The study monitored preterm birth to ensure that the recommendation for earlier change to oral antimicrobials did not impact on rates of preterm birth. 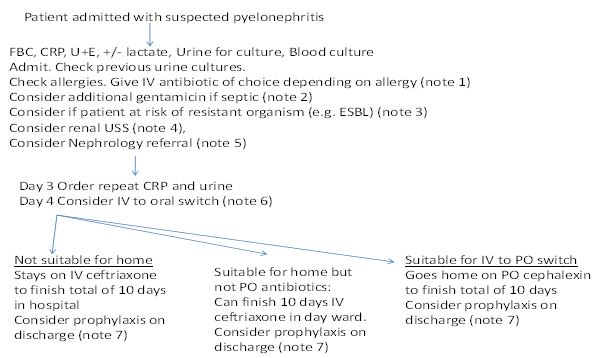 Methods
The study was carried out at the Rotunda Maternity Hospital, a national tertiary referral centre with approximately 8,500 births per year. There was a consultant clinical Microbiologist and Obstetrician available at all times, with an antimicrobial Pharmacist and infection control Midwife available during working hours Monday to Friday. Renal ultrasound scans were performed onsite on a weekly basis and for emergency cases the patient was sent to a local general hospital. Nephrology consults were provided by a visiting Nephrologist.

To assess the impact of the pathway, patients treated prior to its introduction were identified retrospectively using Hospital Inpatient Enquiry system (HIPE) data for kidney infections. Laboratory results and clinical notes were examined to confirm whether the patient had pyelonephritis or a UTI. Pyelonephritis, for the purposes of this study, was defined as a patient with a pure urine culture of ≥105 cfu/ml of a single pathogenic organism with ≥100 WCC/cm3 on microscopy, in association with signs and symptoms consistent with pyelonephritis. Symptoms included back pain, fever, loin pain and dysuria while signs included pyrexia (temp ≥38⁰C) with renal angle tenderness. Patients with confirmed pyelonephritis were included and their medical notes were used to gather baseline characteristics including demographic data, laboratory results, treatment choice and length, readmission rate and outcome data for both mother and neonate. The pre-intervention period was 2012 and 2013.During this time there was a suggested treatment of ceftriaxone 1g once daily empirically. No guidance was provided for the duration of treatment, addition of gentamicin, IV to oral switch, use of chemoprophylaxis or the need to consider ultrasonography. Clinicians could individually manage antimicrobial decisions unless they sought input from microbiology or pharmacy. There was an unofficial historic practice of patients receiving 10 days of IV antimicrobial treatment irrespective of clinical progress when pyelonephritis was diagnosed.

Once the pre-intervention data was collected the clinical pathway was introduced. The aim of the pathway was to streamline the management of pyelonephritis in order to improve patient outcomes and the efficiency of delivering care. This pathway was written by the consultant Microbiologist in collaboration with a multidisciplinary team and was approved by the Hospital’s Guidelines Committee. It was made available on the document control system and in the antimicrobial app available to all clinical staff. Multiple, hospital-wide multidisciplinary educational sessions took place. These included Grand Rounds presentations, non-consultant hospital doctor education sessions and local multidisciplinary emergency training days. Ward rounds were used to identify cases as well as to facilitate discussion with midwifery staff.

There was a non-audited period for the first six months of 2014 to allow for education on and familiarisation with the new pathway. Following this, post intervention data was collected using the same proforma and inclusion criteria as the pre-intervention period, to examine whether the pathway was being used and the effect it was having on the treatment of pyelonephritis. The data was compared using the Chi-square, Mann-Whitney U tests and p-values were used to identify statistically significant differences between the data sets. The outcome measures were the number of patients receiving ≥10 days of IV antimicrobials, prescribing of chemoprophylaxis, readmission with pyelonephritis, IV to PO switch and referral to the renal outpatient clinic.

This was a retrospective study using quantitative analysis methods. All patients who met the laboratory and clinical criteria for pyelonephritis during the data collection period were included to reduce the potential for sampling bias. Ethical approval was provided for this study by the research advisory group (RAG-2016-005). The study was written in accordance with SQUIRE guidelines for the reporting of Quality improvement projects8.

The outcome measures are shown in table 3, of these a statistically significant difference pre and post- intervention can be seen in increased use of gentamicin (13% Vs 52%, p=0.006), increased number of renal ultrasounds ( 17% Vs 47%, p=0.04) and increased use of prophylaxis (21% Vs 68%, p=0.003). The proportion of patients receiving ≥10 days of IV antimicrobials decreased from 48% to 21% post-intervention (p=0.07). The three women who received IV therapy post-intervention for >10 days all had complicated cases – one required IV antibiotics for the duration of therapy as the causative organism was multi-drug resistant with no suitable oral option, one required admission to the high dependency unit for an acute kidney injury as a consequence of urinary tract sepsis, one had ureteric narrowing diagnosed by USS with a history of recurrent urinary tract infections, as her pregnancy was at the threshold of viability she was treated with additional caution.

Table 3 Outcome measures in the pre- and post-intervention groups

Discussion
Clinical pathways and guidelines help ensure optimal, safe and effective management of disease. Introducing this systematic approach to the care of women with pyelonephritis has facilitated a move towards treatment on a case by case basis as opposed to the ‘one size fits all’ management which previously existed. We have demonstrated that the implementation of this pathway has led to reduced duration of intravenous antimicrobials and an increase in use of prophylactic antimicrobials. Increased use of aminoglycosides as adjunctive antimicrobials and an increased use of ultrasonography was also noted. These were viewed as positive changes as the indication for both interventions was specified in the pathway for certain patients. It also assisted in the identification of a cohort that needed renal followup, providing the opportunity to address renal disease and optimise patient care.

In the period before its implementation issues regarding the variability of duration of IV therapy for pyelonephritis and the lack of clarity regarding who should receive prophylaxis had been highlighted.  The introduction of the pathway was accompanied by educational sessions for hospital staff but there was no other intervention introduced during the period analysed.  The characteristics of our patient population were essentially unchanged pre- and post-intervention thus any changes in outcomes are reasonably attributable to the introduction of the clinical pathway.  Post-intervention there was an increase in the number of women with documented rigors at presentation – 31.5% vs 8.7% (p=0.06), although all other patient observation metrics (including temperature) were similar.  This may be down to increased clinician awareness, due to multidisciplinary education that surrounded the introduction of the clinical pathway.

There are only a limited number of published clinical trials in the management of antenatal pyelonephritis. Although previously shown to be possible, we did not consider the use of out-patient management from the time of diagnosis and all suspected pyelonephritis cases received inpatient care 9.

The pathway had a positive impact on patients in that they spent the shortest time possible on intravenous antimicrobials, without significant readmission rates. It is preferable, once safe, to send patients home on oral antimicrobials. The hospital as a whole benefits from this reduced duration of admission and use of intravenous antimicrobials with respect to cost, staff time and antimicrobial stewardship. The increase in workload for the radiology department is relatively small given the total number of patients involved per year. It was anticipated that almost all patients would receive chemoprophylaxis, however nearly one-third of women post intervention still did not receive prophylaxis. This may have been due to concerns regarding nitrofurantoin use at term or to medical omission in error.

Limitations of the study include the fact that it was retrospective, conducted in a single centre and that patient numbers were small.

Economic analysis was not performed as part of this study but as the intervention led to a reduction in the duration of IV antimicrobials given and in readmission rates it likely provides significant cost savings. Strengths of this intervention are that there was no additional capital investment or extra staff required. There was also good multi-disciplinary support and active engagement.

In conclusion, this study has shown that the introduction of a pathway for the treatment of pyelonephritis in pregnancy had a positive impact on several important clinical outcomes. The pathway model can be adapted and applied to other diseases and is generalisable to other maternity settings. Further studies should assess this pathway in other maternity centres, and also address the issue of increased ultrasound requests and aminoglycoside use to determine if they are justified.

Conflicts of Interest Statement
The authors report no conflicts of interest.