Venous thromboembolism (VTE) is a major cause of preventable morbidity and mortality in hospitalized patients. In spite of guidelines, VTE prophylaxis continues to be underutilised,  and hospital acquired thrombosis (HAT) continues to be a problem. This study was conducted to estimate the incidence of HAT in a tertiary referral centre and to examine whether VTE risk assessment and thromboprophylaxis (TP) were implemented. Patients 18 years and above, with a radiologically-confirmed acute VTE during the study period of 15 weeks were included.  Acute VTE was diagnosed in 100 patients and HAT was diagnosed in 48. There were 12,024 admissions over the study period, therefore the incidence of HAT was 0.4%. TP was prescribed in only 35% of patients, and 65% did not receive any or appropriate TP. Hospitals without active implementation of a formal risk assessment tool and TP policy are likely to continue to have increased incidence of HAT.

Venous thromboembolism (VTE) which includes deep vein thrombosis (DVT) and pulmonary embolism (PE), is a major cause of preventable morbidity and mortality in hospitalized patients1-4. More than 1.5 million events of VTE are diagnosed annually in Europe, and more than 500,000 of these cases are fatal5. Hospital acquired thrombosis (HAT) is defined as any VTE event occurring during or within 90 days of hospitalisation5,6.The relative risk of VTE increases more than a 100-fold after hospital admissions for surgical procedures, whereas in hospitalised medical patients overall relative risk of developing VTE ranges from 8-11 fold5. Although evidence based consensus guidelines for VTE prophylaxis have been available for more than 20 years, they are underutilised7,8. Ireland, like many other countries, has yet to implement a mandatory risk assessment and TP policy for hospitalised patients. This study was conducted to estimate the incidence of HAT in a tertiary referral centre in Ireland and to examine whether VTE risk assessment and TP were implemented in these cases.

This study was carried out over a period of fifteen weeks in 2014, at Cork University Hospital (CUH), a tertiary referral centre. All patients 18 years and over with a radiologically confirmed acute VTE during the study period were included. In order to identify patients with confirmed acute VTE, the hospital picture archiving and communication system (PACS) in the Radiology department was used. The PACS database was checked three times a day at regular intervals to check if any patient was diagnosed with VTE. Immediately following identification of a patient with a confirmed VTE event, the researcher consented the patient on site for interview and study participation. Collaboration with the Emergency Department and Acute Medical Unit to inform the researcher if there were any patients diagnosed with VTE, this ensured all patients were captured prior to discharge. Data were collected during the interview and from the patient’s medical chart using the proforma sheet. Data collected included: admission date, VTE diagnosis date, site of VTE, reason for admission, specialty of admission, relevant medical history, mobility status, documented evidence of VTE risk assessment and appropriate TP prescription. At the time of the study there was no formal risk assessment (RA) tool routinely used or TP policy in place in CUH or nationally. Therefore, the researcher had to examine the medical notes for evidence of any documented risk assessment for VTE and the drug prescription chart for chemical and/or mechanical TP. The researcher applied the National Institute for Health and Clinical Excellence (NICE) guidelines9 to calculate each study participant’s thrombotic and bleeding risk on admission prior to diagnosis of VTE.

If the patient reported being previously hospitalised within ninety days of the current VTE event, the above details for that previous hospitalisation were also recorded using the same method as above. The data were analysed using Microsoft Excel programme. Descriptive statistics were used for patient demographics.

Patients were divided into two categories as follows:

1-Patients who presented with symptoms of VTE and diagnosed with VTE on admission to hospital (see figure 1 for subdivision of patients who were admitted with diagnosis of VTE with prior history of hospitalisation within the previous 90 days).

2 - Patients who developed VTE during hospitalisation. 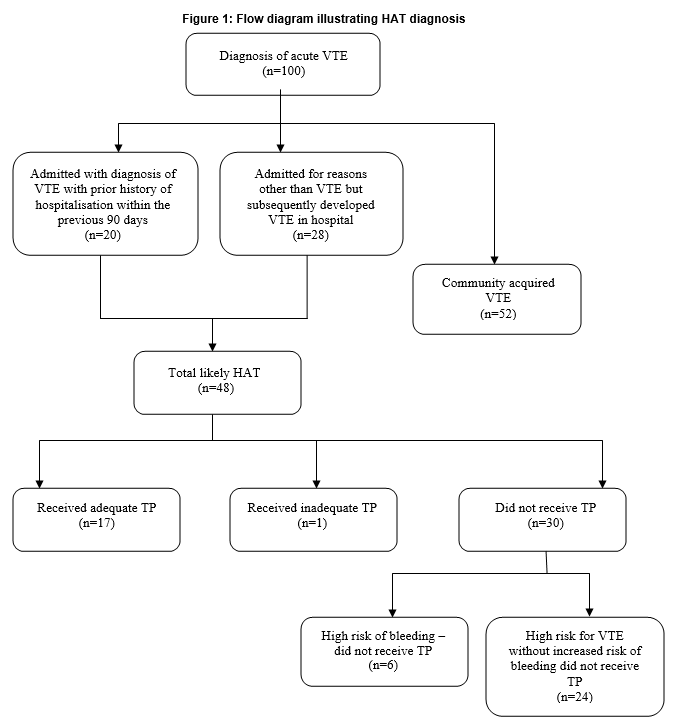 Total hospital admissions in this time period were 12,024 giving a possible incidence of HAT 0.4% (n=48/12,024). The majority of the patients were female 66% (n=32) and 60% (n=29) cases of HAT occurred in patients aged 60 years or older. HAT was diagnosed in 66% (n=31) of medical admissions, whereas surgical and obstetrics admissions accounted for 31% (n=15) and 4% (n=2) of patients respectively. TP risk assessment was not documented in 60% (n=29/48) of the HAT patients and this was based on review of patient’s notes. When the NICE guidelines for TP risk assessment were applied to all the HAT cases, all patients had one or more risk factors for thrombosis and of these patients only seven had one or more risk factors for bleeding9. Therefore, 85% (n=41/48) patients had a high risk of thrombosis without increased risk of bleeding. TP was prescribed in only 35% (17/48) consequently 65% (31/48) either did not receive TP or had inappropriate prescription (Figure 1). The number and type of risk factors for patients who developed VTE despite TP are shown in Tables 1 and 2 for this group of patients.

The majority, 39 cases (81%) of HAT occurred within 28 days of hospitalization (Figure 2). Out of the total of 100 cases of VTE, 29 patients had active cancer or cancer treatment. Of these 29 patients, 21 had HAT as opposed to 8 who developed VTE that was not hospital associated (Table 2). 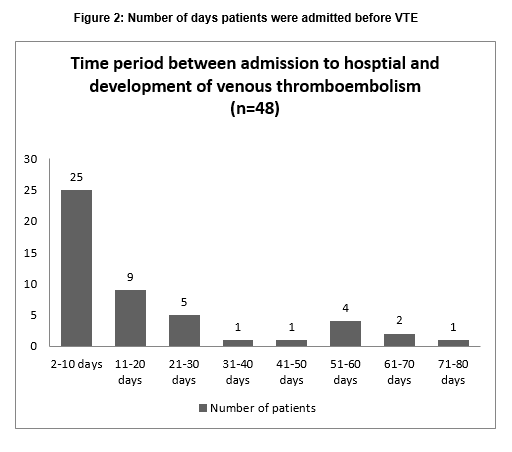 HAT events are associated with significant rates of morbidity and mortality and are mostly preventable. Accurate measurement of HAT incidence requires laborious-intensive chart review and systematic patient follow-up after discharge. Patients may not be re-admitted to the same hospital or indeed may not have survived. Most of the studies in the literature used post-mortem data or discharge diagnosis coding systems for reporting the incidence of HAT10-12.

To the best of our knowledge, this is the first study of HAT in Ireland that attempts to identify the incidence of HAT in a tertiary care hospital using this prospective sample selection process and retrospective data collection.  This study found a HAT incidence rate of 0.4% at minimum during the study period. Our findings are similar to previously reported results in other studies. Khanna et al., (2014) reported HAT incidence in hospitalised patients for medical and surgical patients at approximately 0.25%11. The study by Lederle et al., (2011) found a rate of 1%, whereas Barba et al., (2010) found a rate approximately 0.93% and Spyropolous et al., (2011) reported HAT incidence of 0.55%12-14. The incidence of HAT in our study is likely underestimated due to the following reasons; firstly, patients with HAT diagnosed after discharge from our hospital may be admitted to other hospitals. Secondly, only patients with a confirmed diagnosis were included therefore asymptomatic VTEs were excluded. Thirdly, fatalities associated with HAT were not included as they did not reach the diagnostic stage. Finally, without post mortem examination, the exact aetiology of sudden death cannot be documented.

VTE is a frequent complication in cancer patients, and a previous study reported up to 6 fold increased risk of cancer associated thrombosis compared to those without cancer16. In this study it was noted that out of the total 100 cases of VTE, less than one third (n=29) of the patients had active cancer, moreover 21 of 29 cancer patients who had VTE were hospital associated. This showed a 3 fold increase in HAT due to cancer than community-acquired thrombosis (21/48, 44% vs 8/52, 15%). Our finding is similar to Khanna et al., (2014) who reported 34% association of active cancer with HAT11 as compared to 13% community acquired VTE with cancer. Whereas Barba et al. (2010), reported HAT in these patients to be twice that of community-acquired thrombosis13. This is not surprising as malignancy is a well recognised risk factor for thrombosis. Patients with malignancy who are admitted to hospital should be assessed not only as an inpatient, but also for extended TP post discharge.

In our study, two-thirds of HAT occurred in patients where TP was not prescribed whereas previous studies showed that HAT was due to TP failure17,18,19. There could be multiple reasons for the underutilisation of TP, particularly in medical patients who are often complex and have multiple co-morbidities. These include lack of availability of national TP guidelines and familiarity of international TP guidelines as well as underestimation of the mortality and morbidity rates of HAT. TP guidelines are often complex and embedding them into clinical practice could be difficult. Furthermore, many hospitals do not have a local formal risk assessment tool and TP guidelines.  In addition, low rate of prescribing TP in hospitals is evident where policy is not actively implemented and there are no ongoing audits20.

This study shows the importance of implementing a validated RA tool for all hospitalised patients within 24hrs of admission to hospital and again if there is a change in clinical condition and reassess at discharge as per NICE guidelines9. In this study of those patients that were initially not suitable for TP due to high risk of bleeding or active bleeding (n=6), had no evidence of reassessment of risk of VTE and re-evaluation of TP (Figure 1). Once haemostasis was achieved and the patients were haemodynamically stable a TP risk assessment was not carried out. These patients had multiple risk factors for thrombosis. TP risk assessment is a dynamic process and these patients could have benefited from TP after their acute bleeding event.

Despite appropriate TP, 35% patients developed VTE (Table 1). A previous study by Khanna et al., (2014) reported 55% developed HAT despite appropriate TP11. Overall, within the total HAT population (n=48), 7 patients had four risk factors for VTE, and 4 out of these 7 patients received TP (Table 2).  These patients could represent a group in which VTE is difficult to prevent due to multiple comorbidities especially in medical patients. It is possible that the standard recommended dose of TP is not enough for this group and weight based therapy could be considered. Extended duration of TP therapy could be a way forward for preventing HAT for this group but this category of patients needs to be evaluated in a larger prospective trial. Patients should be risk assessed on discharge for appropriate extended TP treatment.

Our analysis showed that more than 80% of HAT cases occurred within the first four weeks following hospitalisation but risk continued for up to 90 days (Figure 2). Our observation is similar to a US population-based study that reported 67% of VTE events occurred during the first month of hospitalisation15.

The main strength of this study was the method of data collection where patients diagnosed with VTE were immediately identified and interviewed regarding risk assessment and prescription of TP similar to root cause analysis. Secondly, whilst patients diagnosed with VTE were identified prospectively and risk assessed, the data relating to previous hospitalisation were collected retrospectively. A cohort study of all 12,024 admissions over the time period followed for 90 post-discharge would give a more accurate incidence of HAT.

Thirdly, patients who developed fatal VTE were not captured in this study. Further investigation to identify morbidity associated with HAT is required.

MIK had the original idea for study. MIK and SOS wrote the study protocol. MIK and COL collected data. MIK and AOB analysed the data. MIK, COL, VS and AOB drafted the paper. SOS and CD agreed on analysis and reviewed the draft versions. All authors approved the final version of the paper.

There are no competing interests.

There is no funding to report for this submission.

No additional data are available.