Congenital hypothyroidism is a preventable cause of intellectual disability. The aim of this study was to establish whether adding an additional thyroid function check between days of life 10-14 in infants born to mothers with known hypothyroidism identified any additional cases of congenital hypothyroidism requiring treatment that were not detected by the national newborn bloodspot screening programme. Babies who had Thyroid Function Tests (TFTs) measured at 10-14 days of age were identified using the Paediatric Ward attenders log from the years 2012-2014. Data were collected on patients’ TFTs and their mothers’ Anti-Thyroid Peroxidase (Anti-TPO) antibody levels. Of the 121 patients included, none were found to have a significantly raised TSH requiring treatment. 40 infants had repeat TFTs performed. None of the 121 infants had a significantly raised TSH, which required treatment with thyroxine. Congenital hypothyroidism is already being screened for as part of the National Newborn Screening Programme. The findings of our study have led us to recommend stopping current practice of routinely checking TFTs on day 10-14 of life in infants of hypothyroid mothers.

Congenital hypothyroidism (CHT) occurs in Ireland in 1:3500 newborns1. Globally, it is the most common preventable cause of intellectual disability2,3. Newborn screening has been shown to reduce the burden of intellectual disability due to CHT4. European consensus guidelines suggest initiating treatment by 2 weeks of age, as early detection and treatment prevents neurodevelopmental disability and enhances developmental outcomes5. A Scottish paper recommends initiating treatment by 10 days of age6. Interestingly, a study by Leger et al showed that school achievement was unaffected by the age of commencement (median 20 days of life) of treatment7. The causes of congenital hypothyroidism can include thyroid dysgenesis, disorders of thyroid hormone synthesis, iodine deficiency or excess, as well as trans-placental transfer of maternal antibodies or medications3,8. Maternal hypothyroidism is diagnosed in 0.3%- 10% of pregnant women3,9. Overt hypothyroidism is diagnosed in ~2.5% of otherwise normal pregnancies10. The prevalence of Anti-Thyroid Peroxidase (TPO) antibodies in these hypothyroid pregnant women has been reported as 25%-77%11. These antibodies can cross the placenta and potentially adversely affect the foetal thyroid gland2,12. The incidence of transient congenital hypothyroidism caused by trans-placental passage of maternal antibodies is however reported as 1:180,00013.

Current practice in our secondary level institution is to test the thyroid function of infants of mothers on treatment for hypothyroidism on day 10-14 of life. This is not the practice in other developed countries such as Australia, New Zealand and the USA, who consider newborn screening adequate for detection of congenital hypothyroidism. All babies born in Ireland are screened for thyroid dysfunction between days 3 to 5 of life as part of the ‘heel prick’ Newborn Screening Programme1. Detection of a TSH level between 8-14 IU/L initiates a repeat screening card and infants with an initial TSH level of ≥15 IU/L have urgent formal Thyroid Function Tests (TFTs) performed, usually at their local maternity unit with further endocrinology involvement and investigation as necessary depending upon results. Ancillary thyroid function testing in neonates imposes a cost burden on the hospital with regard to laboratory and medical staff resources, as well as potential physical and psychological adverse effects on the infants and their parents.

A study of three year’s duration from the UK, which followed 406 infants who had TFTs checked due to maternal thyroid dysfunction, did not identify any infants requiring thyroid replacement therapy for thyroid dysfunction14. However, one Italian study reports prospectively following infants of mothers with hypothyroidism (secondary to autoimmunity) with TFTs on 3 occasions over the 1st month of life15. Three out of 129 of these infants had thyroxine therapy initiated based on mild TSH elevation (range 10.5 – 13.6 IU/L) at either 2 or 4 weeks of age. However, one of these infants did not have any detectable anti-thyroid antibodies and all three discontinued thyroxine treatment permanently between year one and two of life. Neuropsychological evaluation of these infants was normal using Griffith’s scale.

The principal aim of this study was to establish whether the current practice of testing TFTs at DOL 10-14 provides any advantage in the care of infants of mothers on treatment for autoimmune hypothyroidism, over and above the established Newborn Bloodspot Screening Programme.

A retrospective cohort study was conducted, examining the 3 years between 1st Jan 2012 and 31st Dec 2014. Ethical approval was sought and granted by the Hospital Ethics Board. No external source of funding was utilised. Babies who had TFTs measured on day 10-14 of life were included in the study and identified from the Paediatric Ward attendee log. Mothers were identified using the hospital computer patient database.

Babies were subsequently excluded if their mothers had a history of hyperthyroidism, or if they had TFTs taken for a reason other than maternal hypothyroidism. Information was gathered from the computerised laboratory result system and patient notes. We examined the infants’ TFT results, the proportion of abnormal results and the number of infants who required treatment with thyroxine replacement therapy.

Normal TFT levels were defined as- T4 9-19 pmol/L, TSH 0.35- 4.94 IU/L6,16. We explored proportions of infants who required repeat testing of their TFTs, the indication for same and anti-thyroid antibody status of mother and infant (where available). To establish whether or not the practice of checking infant postnatal TFTs was unique to our institution, we also conducted a phone survey of all other paediatric units in Ireland. Data were collated using a specific database generated using Microsoft Excel and also analysed using program software therein.

Over the three-year study period, 131 babies were identified as being recalled for TFT evaluation between day of life 10-14. Of this number, three were excluded as these babies had TFTs conducted following on from an abnormal TSH result identified via the Newborn Screening Programme. Seven were excluded because their mothers were hyperthyroid. This resulted in a final total number of 121 patients included in the study, of which 72 were male (59.5%), 49 female (40.5%). Birth-weight was normally distributed (see Table 1).. 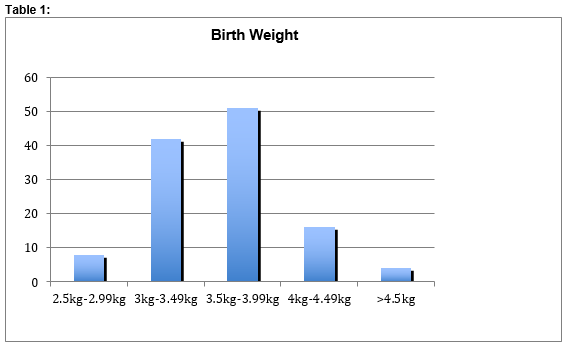 Fourteen babies were found to have raised TSH levels, ranging from 4.97-10.05 IU/L; Mean 6.13IU/L. Five of these had associated abnormalities in T4 levels ranging from 20.3- 24.3 pmol/L. Three infants were not retested as their TSH levels were <0.61 IU/L above the upper limit of normal and this margin was deemed clinically acceptable by the treating physician. Two infants were followed for the first three years of life with raised TSH levels (range 5-8 IU/L), but never required treatment. No developmental concerns were raised at any of these childrens’ subsequent paediatric appointments. The TSH returned to normal in the remaining nine infants over a range of 18 to 46 days (mean 28.2 days).

One infant had TSH levels >10 IU/L which spontaneously returned to normal levels. The maximum TSH recorded was 10.05 IU/L, mean TSH was 3.025 IU/L and the mean T4 was 18.26 pmol/L. No infants were commenced on thyroid replacement therapy. No infants had Anti-TPO antibody levels tested. Forty infants out of 121 had repeat testing of their thyroid function. Twenty-six infants had 1 repeat performed, 6 had 2 repeats and 8 babies had 3 or more repeat testing of their thyroid function. (See Table 2) 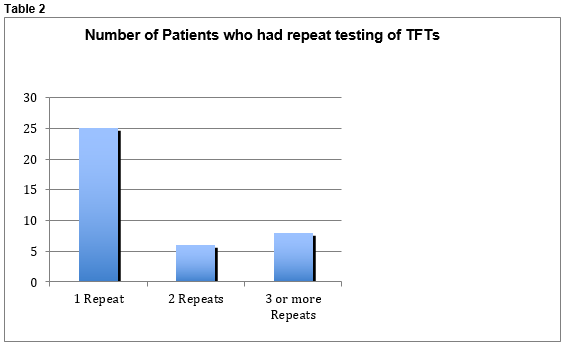 Repeat tests were performed due to either insufficient sample amount and/or mild abnormalities in T4 or TSH in the original sample. Repeat testing was performed at two-week intervals. There were a total of 172 tests performed during the three-year period. Mothers were identified to paediatric staff as being hypothyroid at or after delivery. Anti-TPO antibodies were found to be raised in 54 mothers (44.6%), normal in 23 (19%) but unavailable in 44 (36.4%). (See Table 3) 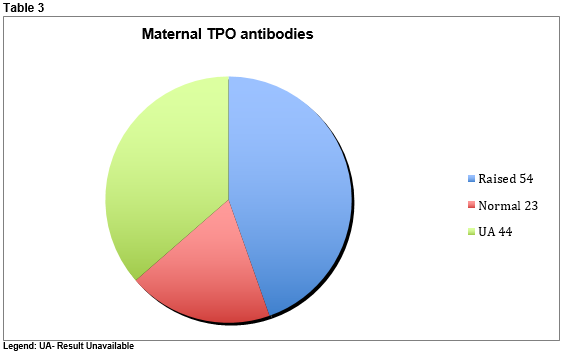 We conducted a phone survey of all other maternity units across Ireland (n=19) and 3 centres confirmed adhering to the practice of routinely testing TFTs of infants of mothers with hypothyroidism between day of life 10-14.

In this study we did not identify any additional infants that had clinically significant hypothyroidism, using the practice of checking their TFTs at day 10-14 of life. Two infants had multiple repeat testing because of marginally raised TSH levels but did not require treatment after three years of follow-up. Three infants were diagnosed with congenital hypothyroidism during the study period, but these infants were not included in our study, as their mothers did not have autoimmune hypothyroidism. These infants were identified as part of the National Screening Programme via the heel prick test. As the incidence of Congenital Hypothyroidism is reported nationally as 1 in 3500 births, three affected infants correlates with anticipated numbers, with the birth rate in our institution being 1600 babies per year.

It is also noteworthy that 19% of mothers of the babies in this study did not have raised anti-thyroid antibodies. These may have been positive in the past and reverted to normal but unfortunately we could not examine their original antibody status at hypothyroidism diagnosis. This is a limitation of the study and we were impaired by limitations of the lab system’s electronic record facility. The retrospective nature of this study also meant that we were also unable to comment on infant anti-thyroid antibody status, nor account for the 36% of mothers who did not have any record of anti-thyroid antibody testing, either during the pregnancy or in the years prior.

Testing thyroid function in newborns imposes significant costs both in the lab and on the ward. Local costing estimates each TFT sent at €22.10 to the laboratory budget. The volume of testing in the three year period examined represents superfluous costs of €3,801. In addition, one must consider the time cost imposed on medical and nursing staff to perform phlebotomy and follow up on the results. Testing TFTs in neonates can be traumatic for the baby as well as also causing potential unnecessary parental anxiety and inconvenience.

The only potential arguable advantage to testing thyroid function at day 10-14 is that it does provide a possible safety net to detect missed congenital hypothyroidism. However a study performed in the UK looking at the effectiveness of ancillary TFT testing in addition to the national screening programme in neonates did not identify any extra cases of congenital hypothyroidism14.

The findings of our study have led us to recommend stopping the current practice of routinely checking TFTs on day 10-14 of life in infants of hypothyroid mothers. Congenital hypothyroidism is a serious condition that is already being screened for as part of the National Newborn Screening Programme. This successfully picked up 3 cases of congenital hypothyroidism in our population in the past 3 years, which fits with the anticipated incidence in our population. We conclude that ancillary testing the thyroid function of term infants of mothers with autoimmune or congenital hypothyroidism does not offer any demonstrable advantage in detecting thyroid dysfunction of offspring over the Newborn Screening Programme. It is also expensive, time consuming and causes unnecessary distress to both infants and their carers. We would make the argument that this practice should be discontinued. Infants of hyperthyroid mothers, who do require TFT monitoring in the early neonatal period, were not included in this study. Update sessions were undertaken in our institution to ensure that appropriate TFT screening continues in this population and cases of neonatal thyrotoxicosis are not missed.

On behalf of all authors, the corresponding author states that there is no conflict of interest.