Life expectancy is increasing in Ireland, but whether this has resulted in healthier life years among the elderly and its impact (if any) on hospital services is unknown. The purpose of the study was to use routinely available data to explore the relationship of age and indicators of clinical complexity in acute hospitals over ten years. The study included all in-patients aged 65+ years from the Hospital In-Patient Enquiry (HIPE) discharged between 2005 and 2014. Indicators of complexity included the Charlson index, overall length of stay (LOS), intensive care unit LOS and deaths in hospital, analysed by the major clinical classification software (CCS). Over the period, the number and rate of admissions increased, especially among those aged 85+. Indicators of patient complexity increased and LOS decreased. In-hospital mortality decreased from 5.9% to 4.7%. Hospitals appear to be managing the emergency care of the older and more complex patient more efficiently and with better outcomes.

Introduction
Life expectancy at birth in Ireland has increased significantly for both men and women since the first official life table was compiled in 1926. Over the 85 year period to 2011, male life expectancy increased by 21.0 years (36.6%) to 78.4 years, while female life expectancy increased by 24.9 years (43.0%) to 82.6 years1. There has been considerable debate about whether the increased life expectancy results in improved health or higher levels of disability. It has been suggested that due to the increase in life expectancy,  morbidity among elderly hospital patients has become more complex whereby the older patient is “made complex” by having multiple co-occurring medical conditions2. Patient complexity may affect process and outcomes of care and therefore measuring patient complexity is important to ensure best care for the patient.  Furthermore, according to the Central Statistics Office (CSO), the older population (i.e. those aged 65 years and over) is projected to increase significantly from 532,000 in 2011 to 1.4 million in 2046 (163%)3. The very old population (i.e. those aged 80 years and over) is set to rise even more dramatically, increasing from 128,000 in 2011 to 484,000 in 2046 (278%)3. Thus, measurement of patient complexity, particularly in the elderly has important implications on how care is organised and how resources are allocated4. In Ireland, there have been no published studies measuring patient complexity. Thus the aim of this study is to use routinely collected hospital in-patient data to explore patient complexity and clinical outcomes in elderly patients over a 10 year study period.

Method
All emergency in-patient hospital admissions for elderly patients (i.e. those aged 65 years and over) to acute hospitals in Ireland between 2005 and 2014 were extracted from the Hospital In-patient Enquiry (HIPE) system via the Health Atlas Ireland system. HIPE is a computer-based health information system that collects data on discharges from acute public hospitals in Ireland.5 The HIPE database contains information on patient age, gender, area of residence, date of admission and discharge, together with their principal admitting diagnosis and up to 20 other diagnoses, coded using the International Classification of Diseases Tenth Revision (ICD-10-AM). Therefore, this study is based on in-patient emergency admissions with a hospital discharge record.

Patient complexity was measured using demographic variables, clinical profile and Charlson Index. The demographic profile included (mean age, age groups ( <85 years, ≥ 85 years) and gender). Clinical profile measures used included mean length of stay (LOS), percentage needing Intensive Care Unit (ICU) care; mean ICU LOS; the percentage who died in hospital; the Clinical Classification (CCS) group (which is a method whereby patient diagnoses and procedures are categorised into a manageable number of clinically meaningful categories and is based on ICD-10-AM6 and the Charlson Index which is method of categorizing co-morbidities of patients based on the International Classification of Diseases (ICD) diagnosis codes7. A score of zero is categorised as low complexity and a score of 10 or more is categorised as high complexity8.

The data were analysed using JMP statistical package9 and SPSS10. T-tests were used to compare means. Logistic regression was carried out on high/low Charlson index scores. Pearson's χ2-test was used to compare proportions in groups of categorical data, χ2-test for trend was used to identify linear trend in Statsdirect11. 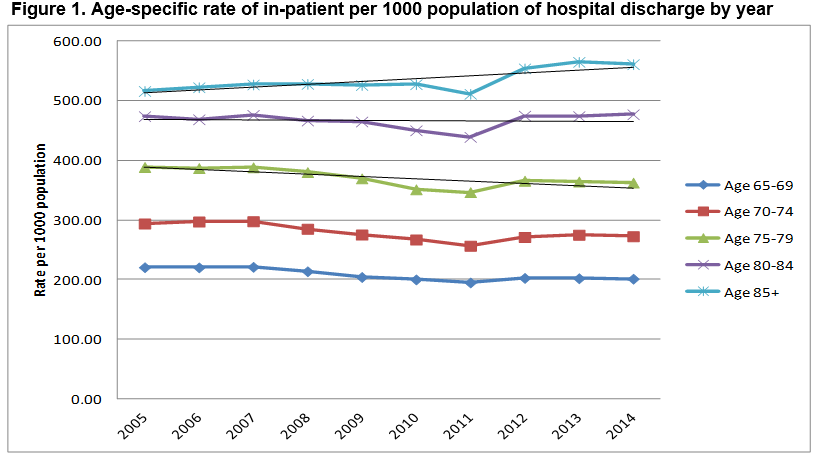 Trends in CCS groups by year
As shown in Figure 2, the most common CCS group continued to be cardiovascular throughout the 10 year study period. However, there was a statistically significant upward linear trend in the respiratory CCS group increasing significantly from 14.2% in 2005 to 17.1% in 2014, Cuzick trend Z = 2.85 p = 0.004. 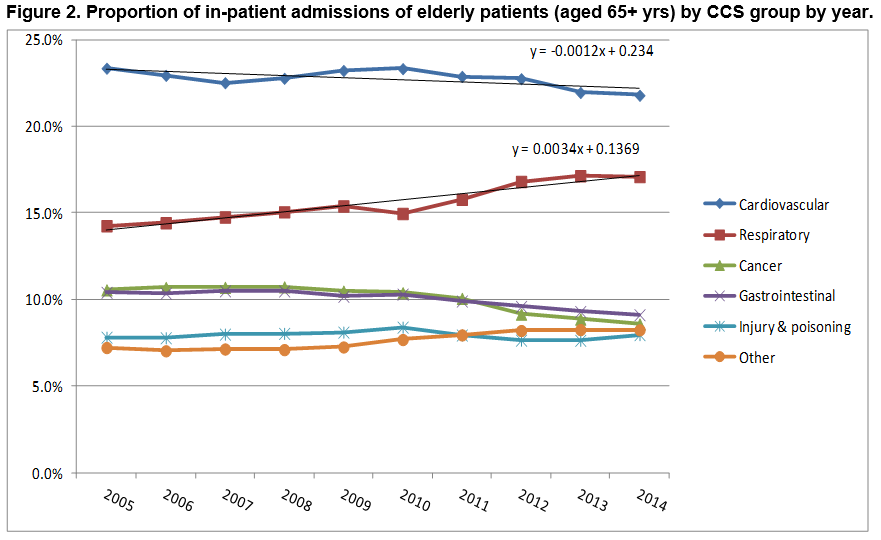 ICU Length of stay
Almost one in 10 (9%) of patients had a stay in intensive care. There was no linear trend present in the proportion of patients with a stay ICU LOS, Cuzick trend analysis, Z = -0.33, p=0.74. The average ICU LOS for patients who had an ICU stay was five days.

It is likely that the advent of the clinical programmes in recent years, particularly with regard to the management of acute coronary syndrome and stroke, together with the reorganisation of acute services, and indeed changes in primary care, have contributed to this finding. The picture of increasing complexity in hospitals is likely to continue in light of increased demographic pressures, and those with less severe morbidity being managed in primary care. This is a welcome finding. However, we must not be complacent given that we have an increasingly ageing population which is likely to lead to an increase in the proportion of complex patients. Furthermore, it has been suggested that the demand placed on health services by increasing numbers of older persons with multi-morbidities and thus increasing levels of complexity is being compounded by an accompanying increase in sedentary lifestyles and poor diet12 .

Conflict of Interest
There is no conflict of interest with regard to this paper for any of the authors.