Kernicterus is a relatively rare consequence of hyperbilirubinemia. There is an important role for MRI imaging for this entity in the appropriate clinical context as there are distinct signal changes in the globus pallidus. A case report and image findings are presented

Case Report
A four-month-old baby girl was brought to the emergency department by her parents who were concerned about her motor development, abnormal movements, and sight. She was born at 37 weeks gestation following an uncomplicated pregnancy and birth with a birth weight of 3.26 kg. In her first week of life, she had severe bilirubin encephalopathy requiring double exchange transfusions and phototherapy. Her serum bilirubin normalized and no cause was identified – pyruvate kinase, Crigler Najjar, and direct Coombs tests were negative. On this presentation, she had reduced upward gaze and choreoathetosis and a clinical diagnosis of kernicterus was made. An MRI brain at 12 months following concerns that she had hearing impairment was performed (Figure 1 A and B) and showed bilateral signal abnormalities in the basal ganglia. A clinical and radiological diagnosis of athetoid cerebral palsy due to bilirubin encephalopathy was made. 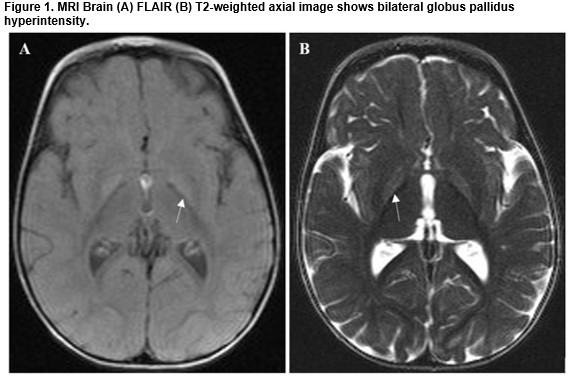 Discussion
Unbound free bilirubin is neurotoxic and can be deposited in the brain inducing immediate disturbances in cerebral metabolism4,5. Neurological manifestations occur at levels above 20mg/dl or lower in preterm infants4. Chronic kernicterus causes visual, auditory and extrapyramidal abnormalities and can present as hypotonia, hyperreflexia, delayed motor development, gaze palsies and hearing loss6. The preferential site for deposition of unconjugated bilirubin in chronic kernicterus is the globus pallidus resulting in symmetric T2-weighted high-signal on MRI and this is characteristic of kernicterus6. However, this finding is not specific for kernicterus and may be seen with other conditions such as hypoxia, hypoglycaemia or encephalitis. Signal abnormalities in the subthalamic nuclei are another typical site of preferential bilirubin deposition generally sparing the thalamus. Other regions of reported signal change include the hippocampi, cranial nerves6-8 dentate nucleus and periventricular infarcts may occur5,9. The cerebral cortex is spared5.

The neuroimaging signal changes of kernicterus evolve over time. In the early stages of acute bilirubin encephalopathy, bilateral globus pallidus T1 hyperintensity is characteristic. An important imaging differential for this appearance is normal lipid-rich myelin seen at term in the globus pallidus. Magnetic resonance spectroscopy (MRS) in kernicterus is still under evaluation but may provide helpful information when T2 findings are subtle10. A limited investigation of diffusion-weighted imaging (DWI) showed no distinctive signal pattern, but a larger study is required. In the appropriate clinical context, bilateral globus pallidus T2-weighted and FLAIR signal hyperintensity is supportive of a diagnosis of kernicterus in an infant.

Conflict of Interest
No conflict of interest to declare