Life After the Event: A Review of Basic Life Support Training for Parents Following Apparent Life-Threatening Events and Their Experience and Practices Following Discharge

Apparent Life-Threatening Events (ALTEs) are a common presentation to paediatric hospitals and represent a significant cause of parental anxiety. Basic Life Support (BLS) training is recommended for all caregivers following ALTEs. This study aimed to assess the rate of caregiver BLS training and reviewed parents experience following discharge. Parents were interviewed by phone following discharge. Over the study period 25 children attended the Emergency Department with ALTE, 17/25 (68%) were trained and 13/17 (76%) were contactable for interview. All parents found training decreased their anxiety level and were interested in attending for re-training. BLS resuscitation was subsequently required by 2/13 (15%) of children. Non-medical grade monitors were in use by 10/13 (77%) of caregivers following discharge. Caregivers are eager to engage in BLS training and it effectively reduces their caregiver anxiety. We recommend an increase in instructor staff and use of group re-training post discharge.

Introduction
ALTEs have previously been defined as events that are frightening to the observer, characterised by any combination of apnoea, change in colour, change in muscle tone, choking, or gagging1. The current American Academy of Pediatrics’ guideline has updated the term ALTE to Brief Resolved Unexplained Events (BRUE) emphasising the medical practitioner’s interpretation of the event and recommending that all parents should receive resuscitation training2. Cardiopulmonary resuscitation training has previously been shown to decrease caregiver anxiety in other settings3. We aimed to assess the rate of caregiver training in our institution, and to explore their experience post discharge (the effect of training on anxiety, use of BLS, use of reminder magnet, use of medications.) As a secondary aim we also reviewed use of home infant monitors following ALTE.

Methods
A database of caregiver BLS training over 2015 was compiled. Consent for follow-up contact was obtained at the time of education. Training consisted of the BLS and choking algorithm in keeping with APLS guidelines4. Parents were given a reminder refrigerator magnet printed with the BLS algorithm at the time of training. Parents were interviewed by phone at least six months after initial training. (Table 1) Patients over the age of twelve months were removed from the analysis. The hospital’s emergency department electronic patient record system (Symphony) was reviewed for the same time period and the number of patients diagnosed as ALTE under the age 12 months was compared with the numbers trained.

Results
Over the study period, 25 patients under the age of 12 months were diagnosed as ALTE in the paediatric emergency department, 21/25 were admitted and 17/25 patients’ guardians receiving training. Of these trained caregivers, 76% (13/17) were contactable for interview and 85% (11/13) were trained prior to discharge. More than one guardian was trained for Eighty percent (10/13) patients. Only one parent had received prior training in a Maternity hospital. Training was performed by the resuscitation officer in the majority of cases (88%(15/17), staff nurses trained 12% (2/17)).The mean age at presentation was 3.8 months. All caregivers surveyed said they would describe their experience as helpful and reported an improvement in anxiety following training, although, 46% (6/13) felt less confident 6 months following training. The rate of event reoccurrence was 15% (2/13). One patient required re-admission to hospital. There was no negative feedback with regard to training. No parents felt it increased their anxiety levels and 85% (11/13) had kept their reminder magnet and found it reassuring. Four patients were started on medications at discharge (two on formula thickeners, one on proton pump inhibitor, and one on an antibiotic). All parents contacted expressed interest in attending for group re-training. 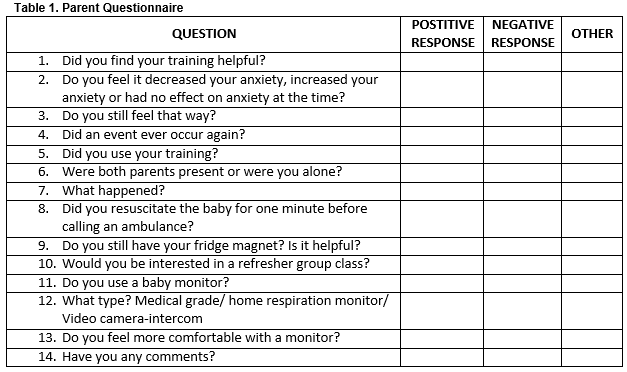 In terms of our secondary aim of reviewing use of monitors post discharge, non-medical grade home monitoring devices were being used by 77% (10/13) of caregivers following discharge (7/13 (54%) using home respiration monitors and 3/13 (23%) using intercom/ video camera systems). Of the caregivers using non-medical grade monitors 40% (4/10) felt it did not help their anxiety levels. Two patients were prescribed a medical grade monitor (MR10) for a period (one airway anomaly, one pertussis).

Discussion
The rate of parental training, at 68%, falls short of the AAP’s guidance that all parents should be trained. Facilitating training in a resource-limited hospitals can be challenging especially when patients are discharged out of normal working hours.  An increase in staff trained in BLS education, as well as the introduction of a defined care pathway could be of benefit. Although all parents felt that training improved their anxiety post-discharge there was a notable decrease in confidence/ increase in anxiety 6 months post training. Studies have previously shown limited retention of ACLS and BLS skills over time even among healthcare professionals.5,6 There was universal interest in retraining among parents. Short refresher courses have been shown in the past to improve retention in BLS skills7. We suggest a short group-based class retraining caregivers be offered approximately 6 months after training. Additionally, we note that a high proportion of parents were using non-prescribed apnoea monitors following discharge. These are not routinely recommended by clinicians and there is a lack of evidence to support their use. Interestingly, 40% of caregivers using these monitors did not feel they improved their anxiety levels.

Conflict of Interest:
The authors have no conflicts of interest to declare.