Introduction
Meningitis is an important cause of long-term morbidity and mortality in children, and it is important that the causative organism is identified as soon as possible, to inform treatment but also to inform likely outcome. Bacterial culture of cerebrospinal fluid (CSF) samples is the standard method of confirming bacterial meningitis however the retrieval of an organism can be affected by several factors such as the pre-sampling administration of antimicrobials in the hospital, the use of intramuscular benzylpenicillin in the community or also by the ease with which the organism can be grown1. Polymerase chain reaction (PCR) has the advantage of being able to detect bacterial DNA even if the organism is no longer viable, which thus can negate the impact of pre-sampling antimicrobials2. Secondly PCR can be done in a more rapid manner in centres with easy access to either real-time PCR multiplex assays or commercial PCR kits using nested PCR technology such as the FilmArray (BioMerieux, France)3-6.

Concerning multiplex PCR testing panels, if used too widely they may generate false positive results thus impacting on patient care. A review of 1,560 CSF samples tested on the FIlmArray ME panel showed that there were 22 false positive results, of which 9 were for bacterial targets, 11 for viral targets and two for Cryptococcus3. The most common bacterial false positive result was for Streptococcus pnuemoniae, which may reflect contamination of the specimen at the time of sampling. When children have false positive bacterial PCR results on CSF samples it leads to unnecessary antimicrobials, prolonged hospital admissions and also increased parental anxiety. There is also a need to consider the cost of this PCR testing as well as the delay in obtaining results as often the samples have to be sent to a reference laboratory, with many of them only processing tests five days a week. The Irish Meningitis and Sepsis Reference Laboratory (IMSRL) is based at Temple Street Children’s University Hospital, and provides a specialist reference polymerase chain reaction (PCR) diagnostic service for the Republic of Ireland. Currently six organisms can be detected by the blood and cerebrospinal fluid assays that are in use: Group B Streptococcus (GBS),7 Streptococcus pneumoniae, Haemophilus influenzae,8 Listeria monocytogenes, Escherichia coli and Neisseria meningitidis. The aim of this retrospective study was to identify patients who had a positive CSF culture or bacterial PCR, yet had a normal CSF white cell count for age and to review their records to determine if the result was clinically significant. This would then inform the laboratory about the usefulness of CSF PCR and culture in patients with a normal CSF white cell count for age.

Methods
The study was carried out in Temple Street Children’s University Hospital, which is located in Dublin, Ireland. It is a tertiary referral paediatric stand-alone hospital, which also provides secondary level paediatric care to the children of North Dublin and surrounding areas. The IMSRL is also based on this site, and provides a bacterial PCR reference laboratory service for the Republic of Ireland. The study was approved by the Ethics Committee of the Children’s University Hospital (#16.003).

All paediatric CSF samples taken in Temple Street Children’s University Hospital from 2005-2015 inclusive, excluding samples from Neurology and Neurosurgical patients, were identified using the laboratory information system. These patients were excluded as they may have had intraventricular prosthetic devices, brain tumours or autoimmune disorders that would potentially affect the interpretation of the CSF white cell count. The data were extracted and analysed using Excel (Microsoft Corporation, Redmond WA, USA). Samples which grew commensal organisms such as Coagulase negative Staphylococci, Streptococcus viridians and Micrococcus spp. were excluded. The exclusion of these cases was done retrospectively by the authors based solely on the organism without consideration of the clinical details and the patient’s clinical team were not asked regarding the case to help with its exclusion or inclusion. This was felt to be acceptable as the commensal organisms listed above are not common causes of community acquired meningitis in a paediatric population. All PCR tests performed on CSF samples between 2010 and 2015 were included. These dates were taken as this is when the multiple test options (e.g. meningococcal, pneumococcal and H.influenzae) became available for requesting on samples from all centres across the country. During this study period clinicians were free to request whatever PCR tests they wanted and there was no set guidelines in place to advise them at a national level or from the IMSRL.

The age-specific cut-off criteria for the normal range was taken from the United Kingdom standard for Microbiological Investigation for Cerebrospinal fluids. This states that for neonates aged ≤6 days the normal range for CSF white cell count is 0-30 cells x106/L, 0-20 cells x106/L for children aged 7 days to 4 years, 0-10 cells x106/L for children aged 5 years to puberty and 0-5 cells x106/L for adults. For this study puberty was taken as 9 years and adult was defined as ≥10 years.9-11 Only the CSF white cell counts for PCR or culture positive samples were reviewed for this study. When interpreting the white cell count, no allowance was made for the number of red cells present in the sample. Continuous variables were analysed using MedCalc software version 16.4.2 (MedCalc Software bvba, Ostend, Belgium) , and GraphPad Prism Version 5 (GraphPad Software Inc, La Jolla CA, USA) was used for constructing graphs.

Results
From 2005 to 2015, 3,914 cerebrospinal fluid samples were received from 2,482 non-neurology and non-neurosurgical patients (figure 1). Of the 566 positive cultures, eight (1.4%) fungal growths were excluded along with 472 (83.3%) bacterial contaminants, which left 86 (15.2%) samples with significant cultures. Each of these culture results were reviewed and 33 were excluded as they were either multiple positive cultures from the same patient, post mortem samples or the samples were taken from patients with indwelling intracranial prosthetic devices. There were then 101 patients with bacterial meningitis included in the analysis, of which 27 were positive by PCR and culture, 26 were positive by culture only and 48 were positive by PCR only.

The CSF white cell count was analysed by organism for the four most common organisms (figure 2). When suspected contaminants were excluded, the median white cell count for meningococcal cases was 1540 cells/cm3 (n=35, Interquartile (IQR) range 545.5-3032.5, range 15-14,325), 643 cells/cm3 for pneumococcal meningitis (n=15, IQR 122-2453.5, range 53-10,680), 801 cells/cm3 for GBS cases (n=16, IQR 461-1655, range 71-9040) and 872 cells/cm3 for H. influenzae cases (n=5,range 390-3750). The National Institute for Health and Care Excellence (NICE) guidelines for meningitis use a lower cut-off value for white cells in the CSF, with over 20 cells/μl in the neonatal period and over 5 cells/μl (or 1 neutrophil/μl) beyond the neonatal period taken to be abnormal. If these white cell count cut-off values were used, excluding the note about neutrophil count, then four of the 18 cases in table I would have been deemed to be meningitis cases (see table 1 patient numbers 12-S.aureus, 14-GBS, 17-GBS and 18-Meningococcus). On reviewing the cases, with the key clinical details presented in table 1, only the meningococcal case was felt to be clinically significant (blood PCR positive also) and the other three were thought to be contaminants still. 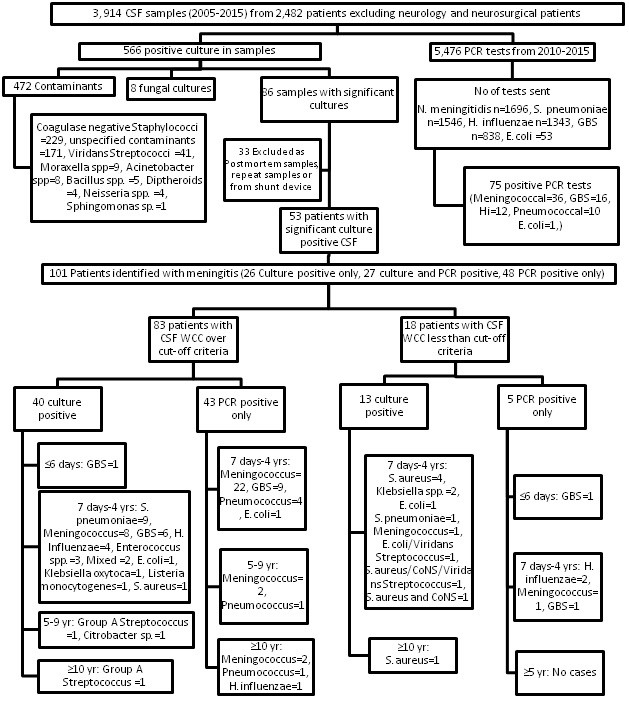 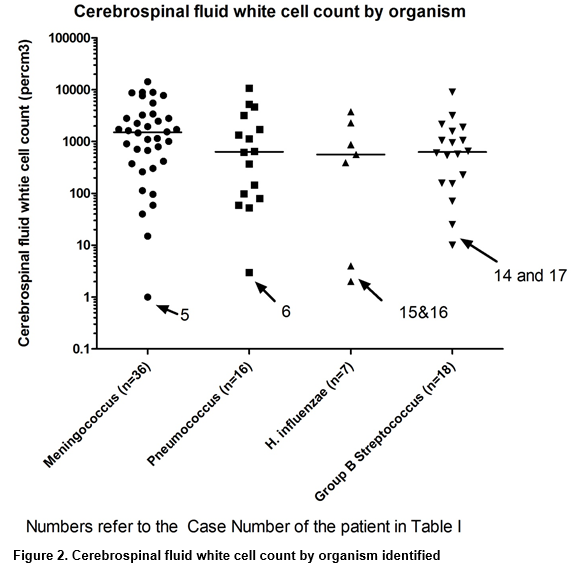 Discussion
This study from a large paediatric centre with co-located reference laboratory has shown that only 18 patients out of 2,482 (0.6%) patients had a significant positive bacterial growth or positive bacterial CSF PCR in 11 years with normal CSF WCC. Only 5 of these cases were determined to be significant results on clinical review (n=5 (0.15%) from 2,482 patients). This very low rate shows that it is rare to have bacterial meningitis with a normal CSF WCC and negative culture in children. Of note in these 5 cases, two had positive blood cultures with the same organism, two were neonates with significant urinary tract infections and one patient had the lumbar puncture performed on day six of antimicrobial treatment. The cases that were positive by PCR only were noted to have higher cycle threshold (Ct) values than would be expected in comparison to other positive PCR samples which were culture positive as well. It may be in these cases classed as clinically non-significant that contamination of the specimen happened at the time of sampling, most likely due to the presence of these organisms in the nasopharynx of either the physician holding the spinal needle or the assistant who is holding the child in the left lateral position with their face overhanging the needle. This rate of contamination in this study is high and has led to a re-evaluation of the practice of performing lumbar punctures in the hospital. It was not routine during this study period for the assistant or the physician to wear a surgical mask at the time of sampling, however this has now become standard. Staff are also encouraged to allow time for the chlorhexidine wash to dry and also additional training is given on correct technique.

Pitfalls may arise in association with a specific and focused PCR requesting process such as this. PCR has the advantage of being more rapid than culture, especially now with the introduction of nested PCR technology from neat CSF samples. Also it may be useful for patients who have received pre-hospital intramuscular antimicrobials, especially in the setting of suspected meningococcal disease, which has been shown to be as high as 29%.12 This may vary depending on the proximity of the child’s community physician to the nearest paediatric hospital. The best way to avoid having meningitis cases not tested, is to ensure that suitably experienced microbiologists are available to discuss cases with the local paediatricians and that testing can be arranged on request from a senior paediatrician. There is a need also to establish what is the acceptable number of white cells in a CSF sample. The Standard for Microbiological Investigations (SMI) guideline which is used by many laboratories differs from that of the NICE guidelines which is more cautious using a CSF white cell count cut-off of 5 cells/cm3 for children beyond the neonatal period. In our study only four patients with a positive CSF culture or PCR would have been considered as meningitis if the NICE guidelines had been followed but only one was thought to be clinically significant. It may be possible thus to use the more conservative SMI guideline from Public Health England which again would lower the number of PCR tests sent.

For children with a normal CSF WCC the sample should not be routinely sent for bacterial PCR testing, but only done after consideration and discussion with senior clinicians and infection specialists. This study did not evaluate the role of viral PCR testing on children with a normal CSF WCC and the results cannot be directly extrapolated to viral testing. Consideration would also have to be given to implementing the NICE guidelines recommendation that bacterial PCR testing is not sent until the culture is negative, however this may affect turnaround time and also antimicrobial stewardship interventions.13 For children with peripheral leucopaenia due to severe sepsis, the bacterial PCR tests can be requested if they are needed. There is a need however to introduce this process cautiously with appropriate ongoing audit and feedback sessions with clinicians to identify problem cases. This should also reduce the possibility of false positive bacterial PCR results, along with a benefit for the patient as they will not have to wait on PCR results that are sent out from the local hospital to the reference laboratory, but can have antimicrobials discontinued on the basis of CSF culture alone. With this information the IMSRL suggests that sending paediatric CSF samples for bacterial PCR testing should only be routinely considered when there is a CSF white cell count above the specified age-related cut-off criteria, the target organism has been cultured in blood or specifically for E.coli PCR, when there is a confirmed urinary tract infection in a neonate irrespective of the blood culture or for a specific reason a senior paediatrician believes bacterial meningitis may be present.

Acknowledgements: The authors would like to thank the staff of the Microbiology laboratories at Temple Street Children’s University Hospital for their assistance in this work.

Funding: No funding was received for this project.
Disclosure: None of the authors have a relevant disclosure or conflict of interest to declare