Between June 2009 and July 2012, Apnoea-Hypopnoea Index (AHI) and Functional Outcomes of Sleep Questionnaires Scores (FOSQ) were prospectively evaluated pre- and post-operatively in patients undergoing bariatric surgery. A total of 167 subjects were studied, 75.4 % were females. The median age was 46 (14-75) years and BMI 49 (36-69) kg/m2. Ninety two (55.0%) patients were diagnosed with Obstructive Sleep Apnoea (OSA) preoperatively. Fifty (54.0%) required positive airway pressure (PAP) therapy. The mean reduction in BMI post bariatric surgery was 12.2 ± 4.52 kg/m2 at 6.56 ± 2.70 months. Eighty (87.9%) reported improved sleep quality reflected in improved scores in all domains of the FOSQ (p<0.001, paired t-test). Improvement in FOSQ scores remained significant (p<0.05) in those with and without OSA. Thirty-nine (90.7%) patients discontinued PAP due to resolution of daytime sleepiness. In conclusion, weight loss following bariatric surgery has a positive impact on sleep in patients with and without OSAS.

Over the last few decades, the prevalence of obesity has escalated worldwide. The World Health Organization (WHO) has predicted that, by Year 2015 more than 700 million people will be obese (BMI>30kg/m2).1 According to the SLAN 2007 Survey of lifestyle, Attitudes and Nutrition in Ireland report2, one in four Irish adults are obese and two out of five Irish adults – 39% (45%of men; 33% of women) are overweight. The obesity pandemic is an alarming problem from a public health perspective and requires a deeper appreciation of its pathophysiology, clinical manifestations and treatment options. The increase in obesity has translated into many obesity-associated co-morbidities such as type II diabetes, dyslipidemia, cardiovascular diseases and sleep-disordered breathing. This in turn leads to an estimated life expectancy reduction of 5-20 years in severely obese patients3 on top of a significant reduction in patient’s quality of life. Bariatric surgery is currently the only treatment which has been shown in randomized-controlled trials, to produce sustained weight loss and improved quality of life in morbidly obese patients. Anecdotally, weight loss following bariatric surgery is associated with a marked improvement in level of daytime sleepiness. However, few studies have attempted to confirm or quantify these changes and to examine whether the improvement in sleepiness is limited to those suffering from obstructive sleep apnoea (OSA).

Between June 2009 and July 2012 a prospective evaluation of consecutive bariatric patients attending the Bon Secours Hospital Cork was performed. One hundred and sixty seven patients underwent surgical intervention during this period. Surgical intervention was strictly in accordance with international guidelines for bariatric surgical intervention whereby bariatric surgery is offered as a type of treatment for people with obesity with BMI of 40kg/m2 or more, or between 35kg/m2 and 40kg/m2 and other significant co-morbidities (e.g. hypertension, diabetes, metabolic syndrome) that could be improved with weight loss.4 All patients were discussed at a multidisciplinary team meeting with surgeon, cardiologist, endocrinologist, sleep physician, psychologist, dietician and physiotherapist before proceeding for bariatric surgery.

All patients were interviewed pre-operatively and diagnostic sleep studies were performed if OSA was suspected. Ninety-two (76.7%) patients were referred with a pre-existing diagnosis of OSA. For the purposes of this study age, gender, surgical procedure and date, and Body Mass Index (BMI) pre-operatively and at six months post-operatively were retrieved from the Cork Clinic Bariatric Surgery database. Apnoea Hypopnoea Index (AHI) value was recorded in all patients who underwent sleep studies. OSA severity was defined as severe (AHI≥30), moderate (AHI 15 to <30) or mild (AHI 5 to <15). AHI <5 was indicative of absent OSA. Patients with documented severe OSA (AHI ≥30) were invited for repeat sleep study at 6 months post bariatric surgery. Requirement for positive airway pressure (PAP) therapy for treatment of sleep-disordered breathing was recorded. Subsequent discontinuation of positive airway pressure therapy post-operatively on resolution of OSA symptoms was also recorded. The Functional Outcomes of Sleep Questionnaire (FOSQ) is a measure used to assess sleep quality. It has a reported test-retest reliability of 0.90 and an internal reliability of alpha = 0.95. It is a tool that has been successfully used to distinguish patients with clinical sleep problems from a healthy control group (T157 = -5.88, p =0.0001).5 In a 30 item FOSQ, patients rate their ability to perform various activities based on a sleepiness scale of 0 to 4, where 0 indicates that a person does not participate in this activity for other reasons, 1 indicates extreme difficulty and 4 indicates no difficulty with the activity. Five FOSQ subscale scores namely, general productivity, social outcome, activity level, vigilance and intimate relationships and sexual activity are also obtained. All patients completed the FOSQ pre-operatively and at approximately six months post-operatively.

One hundred and twenty six (75.4%) were female. One hundred and twelve (67.7%) underwent laparoscopic gastric bypass. Fifty two (31.1%) underwent laparoscopic sleeve gastrectomy and three (1.8%) underwent gastric banding. One hundred and twenty (71.9%) had diagnostic sleep studies with ten (10.9%) from other institutions. OSA was diagnosed in 76.6% of the 120 sleep studies with an overall prevalence of 55.1% in our bariatric cohort studied (Figure 1). However, the mean (range) AHI was 26 (2.8), in the moderate range. Also, fifty five (59%) of those diagnosed with sleep apnoea preoperatively had two or more significant co-morbidities requiring daily medical intervention (Figure 2). The majority of the patients had significant reduction in AHI values postoperatively. Nineteen (36.5%) of patients who had previously been utilizing masks accepted an invitation for repeat sleep studies at 6 months post-surgery. Four of these nineteen patients had no recorded pre-operative AHI readings. Seventeen (89.5%) of these 19 patients were sufficiently cured of OSA to discontinue PAP. Two patients had persisting severe OSAS despite a marked reduction in BMI. Fifty (54%) patients had required PAP therapy preoperatively. Seven of these 50 patients were un-contactable. Thirty-nine (90.7%) of the 43 patients who did submit for follow-up reported a dramatic post-operative improvement in their sleeping and have since been taken off their PAP devices.

Table 1: Percentage of patients with improved FOSQ scores (in categories) 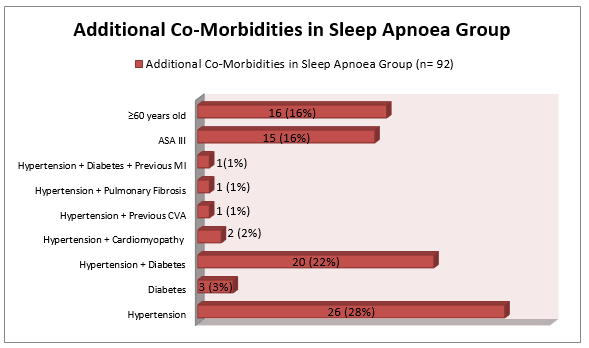 Figure 3: AHI values before and after bariatric surgery 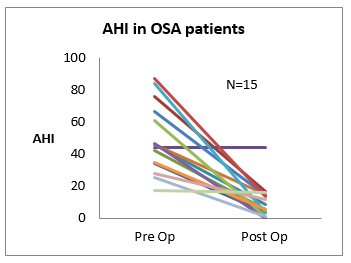 There was a high prevalence (55%) of sleep disordered breathing in our cohort of bariatric surgical patients. This is similar to the findings in the LABS-2 study.6 Post-operatively, there was a mean reduction in BMI of 12kg/m2. Thirty-nine (90.7%) with OSA were deemed sufficiently cured that they could discontinue positive airway pressure. The surprise finding was the significant improvement in the level of daytime sleepiness in patients without OSA following surgery. A significant number of patients (41.6%) required positive airway pressure (PAP) for treatment of OSA. We chose to repeat sleep studies in only those with severe OSA (AHI>30) six months post-surgery. Despite our best efforts, only 19 out of 52 (36.5%) accepted this invitation. The reason for this is not fully established but most likely related to the patients spontaneously abandoning their masks when their sleeping improved and then being disinclined to make the effort to return for further sleep studies. Although we could not measure a repeat AHI for these patients, we were at least able to determine whether or not they were utilizing their PAP devices. Those who did re-attend for sleep studies were deemed sufficiently improved (except for two patients) that PAP was no longer deemed necessary (Figure 3). It is important to note that many patients post-surgery had a persistently elevated AHI (>5) despite an impressive weight loss. This provokes the argument that OSA still exists and that positive airway pressure should be continued. However, these patients had no symptoms of OSA and the AHI was only in the mild to moderate range (AHI <30) i.e. CPAP therapy not indicated. Furthermore, subjects in this study were mostly female (75.4%), in their 40s, and had a very elevated preoperative median BMI of 49kg/m2, but a moderate level of OSA (AHI15-30). In most studies linking OSA with cardiovascular disease, a very different phenotype of OSA is seen comprising of mainly men, a lighter BMI, roughly 5 years older, but more severe OSA (AHI>30).

We used the Functional Outcomes of Sleep Questionnaire (FOSQ) as a marker of sleep quality pre and post-surgery. Ideally we would have liked to perform full polysomnography (PSG) to objectively measure sleep quality in all patients, pre and post-surgery. However, this was not practical because PSG is a scarce resource and it is not clinically indicated to perform repeat sleep studies on asymptomatic patients with either none to moderate OSA. On the other hand, the FOSQ is very quick and easy to complete, and has been validated in many studies as an acceptable reflection of sleep quality. What is surprising is that patients without a pre-existing diagnosis of OSA reported improved daytime sleepiness post-bariatric surgery. Poor sleep in the morbidly obese is likely multi-factorial. Obesity itself is a cause of poor sleep because of difficulty sleeping in “too small” a bed. Losing weight and bulk, should theoretically make it easier to sleep. Many patients with morbid obesity suffer from low self-esteem which in turn leads to anxiety/depression. These negative feelings and the treatment with anxiolytics or antidepressants compromise sleep further. Many of the study group snacked at night preoperatively. This is well known to cause insomnia. Post-operatively, it is difficult for patients to partake in nocturnal snacks because of the physically smaller stomach. Finally, those patients not labelled as having OSA could still have had minimal sleep disordered breathing symptoms which would not fit the diagnostic criteria for OSA, but which responds well to positive airway pressure or significant weight loss.

Bariatric surgery resulted in significant weight loss, which strongly correlated with cure or improvement (94.1%) in morbidly obese OSA patients and significantly improved sleep in all (87.9%) bariatric patients in our study.  In conclusion, bariatric surgery results in significant improvement in the quality of sleep and is a very effective treatment modality for severe sleep apnoea in the morbidly obese population. Also, the majority of patients (90.7%) who were dependent on PAP masks for many years can safely dispense with their masks within six months of surgery.