Patients with inflammatory bowel disease (IBD) have an increased risk of developing malignancy. The use of immunosuppressive therapies and tumour necrosis factor (TNF) inhibitors in these patients may provide a further risk for the development of malignancy. We report the clinical and pathological findings of a high grade osteosarcoma in a patient with Crohn’s disease receiving TNF inhibitor therapy. In this case, a 32-year old female presented with a painful right knee after receiving maintenance adalimumab for Crohn’s disease for a period of six years. There is a substantial hypothetical link between TNF inhibitor regimens such as adalimumab and an increased risk of malignancy. TNF inhibitor therapy should be ceased and chemotherapy and surgery is an effective combined modality approach in these patients. The role of TNF inhibitors in patients after cancer diagnosis is uncertain and further research is required to assess efficacy and safety.

A 32 year old presented to the emergency department with a painful right knee. Her past medical history was significant for a 16-year history of Crohn’s disease. She was treated with courses of methotrexate and infliximab prior to commencing maintenance adalimumab six years prior to her presentation. She had no subsequent acute exacerbations of her Crohn’s disease while receiving adalimumab. Initial work up for her knee pain revealed a suspicious lytic area on X-Ray. A subsequent MRI showed an extensive destructive lesion of her distal femoral metaphysis through the lower third of the femoral shaft and distal femoral epiphysis with associated soft tissue mass swelling anteriorly. A right femoral biopsy was performed confirming high grade osteogenic sarcoma. PET CT confirmed an isolated lesion with no distant metastases. Adalimumab was discontinued. She was commenced on neoadjuvant chemotherapy with high dose methotrexate (8000mg/m2) alternating with doxorubicin (25mg/m2) and cisplatin (100mg/m2). Preoperatively PET CT revealed a radiological response to chemotherapy and reaffirmed the absence of distant disease.  She underwent en bloc resection of the distal right distal femur. Final histology showed excellent response from chemotherapy with a grade III tumour necrosis of ninety five percent. Adalimumab remains on hold and she has had no acute exacerbations of her Crohn’s disease. 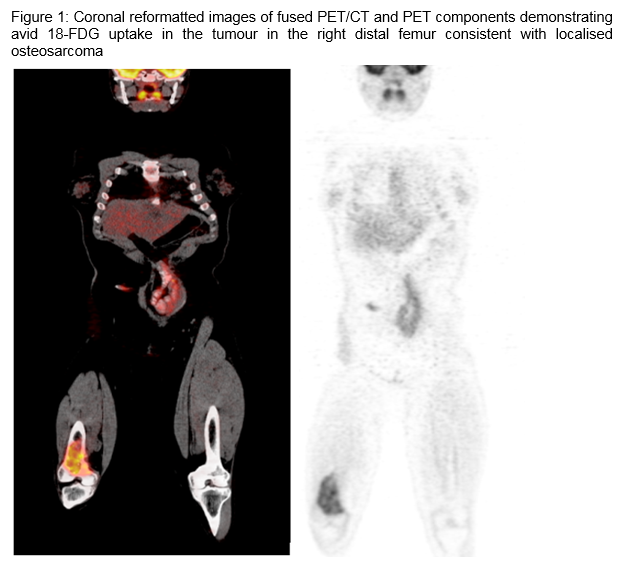 Osteosarcomas are rare primary malignant tumours of bone that are characterized by the production of osteoid or immature bone by malignant cells1,2. Crohn’s disease is an autoimmune inflammatory condition that can affect any portion of the gastrointestinal tract. TNF-alpha is synthesized by activated macrophages and T cells as a transmembrane precursor protein and plays a pivotal role in causing chronic intestinal inflammation in inflammatory bowel disease (IBD)3,4. Synthetic TNF-alpha inhibitor antibodies have been shown to reduce this inflammatory process5. Adalimumab is a recombinant human monoclonal antibody directed against TNF that has been approved for use in Crohn’s disease. The activity of TNF-alpha against tumours in laboratory models suggested the possibility that inhibition of this cytokine might increase the clinical risk of malignancy. Proof of a link between TNF inhibitor use and the development of cancer in patients with IBD is difficult for several reasons due to the possible long term risk of malignancy from their underlying disease and previous immunosuppressive therapies. The potential relationship between TNF inhibitor use and the development of solid malignancies has been addressed in a number of case reports, reviews and meta-analyses and although some meta-analyses of clinical trial data have found an increased cancer risk with TNF inhibitor use, other observational data, particularly from registries, have not confirmed these findings6-9. Patients with IBD who are diagnosed with cancer should have their TNF inhibitor therapy held until their cancer is controlled10. Cytotoxic chemotherapy may also help control IBD during cancer therapy and corticosteroids may be used to control acute flares.