Perampanel is a non-competitive antagonist of AMPA glutamate receptors on post synaptic neurons. The aim of this study was to conduct an audit of the experience of perampanel treatment in Ireland based on the interrogation of the national epilepsy electronic patient record (EPR). A retrospective audit was compiled which reviewed the progress of patients who had been treated across two regional epilepsy centres. The EPR was used to identify patients and collect information relevant to their perampanel therapy. Collected data was entered into a statistical package for social sciences for analysis using descriptive statistics.

70 patients were identified for inclusion in this audit. Partial onset epilepsy was the predominant epilepsy syndrome treated with perampanel. Eight milligrams daily was the maximum dose achieved in 31.45% (n=22). Complex partial seizures demonstrated the best seizure response to perampanel, which was optimal at doses of 4mgs to 8mgs once daily. Treatment was discontinued primarily due to side effect profile (28.5%; n=20). The common side effects reported were behavioural alteration, sedation and dizziness. Abnormal thoughts were identified in 4.2% (n=3). Overall perampanel has been shown to be an effective adjunct. The EPR was demonstrated as an effective tool for audit and research.

In recognition of the demand for specialist epilepsy services, the Irish national clinical care programme for epilepsy has devised a model of care that is currently being implemented. Integral to its success is the epilepsy electronic patient record (EPR), which is currently being rolled out across regional epilepsy centres nationwide¹. The EPR is a centrally hosted, secure web based system. It is populated and updated during clinical encounters with patients. It captures a wide variety of information specific to the patient’s epilepsy, diagnostic investigations and treatments. The details behind access to and information about the data captured on EPR have been comprehensively described elsewhere². Information outlining the purpose and benefit of the EPR is made available for patients and indicates its potential for facilitating clinical audit and service improvement. For authorised EPR users, access is limited to the records of patients for whom they have a clinical responsibility. To date, the EPR contains the clinical records of almost six thousand individuals with epilepsy.

Glutamate is a primary excitatory neurotransmitter which is implicated in various neurological disorders caused by neuronal over excitation. Perampanel is a non-competitive antagonist of  amino-3hydroxy-5-methyl-4-isoxazolepropionic acid (AMPA) glutamate receptors on post synaptic neurons 3, 4. Excitatory neurotransmitters including AMPA receptors are validated targets for anti-epileptic drugs (AED). The therapeutic dosage range of perampanel is between 4 – 12 mgs daily5. It is 95% protein bound and has a half-life of 105 hours, or 25 hours with concurrent carbamazepine6. Perampanel is approved for adjunctive treatment of partial onset seizures with or without secondary generalisation in patients with epilepsy, aged 12 years and older7. Recently perampanel has also been approved as adjunctive therapy for generalized seizures in patients with idiopathic generalized epilepsy8.

The aim of this study was to conduct an audit of the experience of perampanel treatment in Ireland based on the interrogation of the national EPR. A retrospective, audit was compiled across two regional epilepsy sites, to assess the progress of patients that were treated with perampanel. A data access agreement between the auditor and the relevant data controller was established for the purpose of conducting this audit. Interrogation of the EPR yielded patient records where perampanel was documented as either a current or prior anti epilepsy drug (AED). The following inclusion criteria were adopted:

1. Patients were adults over 18 years of age.

2. Patients attended one of the two designated regional epilepsy centres and were receiving specialist care from epilepsy specialists.

3. Patients were treated with perampanel for greater than four months.

4. Patients had an EPR entry.

Patients with an intellectual disability were also included. Where a record met the above criteria, the EPR was further interrogated to extract clinical data for each patient including epilepsy classification, seizure semiology, dosing, responders, side effect profile, reasons for perampanel withdrawal, as well as concomitant AED’s. Extracted data was de-identified and coded. Audit data was analysed using SPSS using frequencies and descriptive statistics.

One hundred and fifteen patients were identified from the EPR as potential candidates for the audit; of these 70 patients fulfilled the inclusion criteria. Of those, 30% (n=21) of these had an intellectual disability. The audit cohort were predominantly refractory, 77% (n=54) had epilepsy for over twenty years. Partial onset epilepsy was the predominant epilepsy syndrome 68.8% (n=48), half of whom had established lesions 34.2% (n=24). Multiple seizure types were experienced. Complex partial seizures and secondary generalised seizures were principle seizure types in 75.7% (n=53) and 60 % (n=42) respectively. The majority of patients had tried and failed two or more AED’s before starting perampanel treatment, 88.5% (n=62).

Perampanel was increased fortnightly in 60% (n=42) of patients. Eight milligrams daily was the maximum dose achieved in 31.45% (n=22).Side effect profile was the main reason for discontinuation of perampanel, 28.5% (n=20). These mostly presented at 4mgs and 6mgs once daily.

Seizure response and side effect profile

In 67.1% (n=47) reported side effects and patients experienced more than one side effect (see table two). 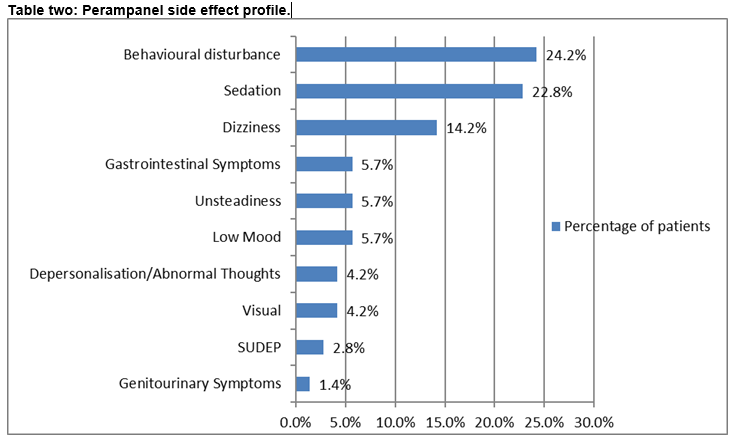 From this audit, the number of concomitant AED’s appeared to influence the presentation of side effects (P=0.020). This proved an important factor for discontinuing treatment (P=0.027), especially if carbamazepine was included in the regimen (P=0.018). Concomitant use with lamotrogine or leviteracetam appeared better tolerated. The impact of carbamazepine on perampanel has been described in terms of efficacy4. From a pooled analysis of the phase III trials, efficacy of perampanel was lower when carbamazepine was co administered with perampanel than with valproate, lamotrogine or levitiracetam4. Phase II trials indicated that carbamazepine, oxcarbazepine and phenytoin have inducing effects on perampanel metabolism, lowering plasma concentrations10.

Perampanel 8mgs and 12mgs have been associated with a reduced seizure frequency and greater than 50% response rates9-11. Median percentage change in seizure frequency and 50% and 75% response rates were comparable in patients who completed studies on 12mgs perampanel versus 8mgs11. In trial 306, the minimally effective dose was 4mgs. From the audit cohort, optimal response was at doses of 4mgs once daily to 8mgs inclusively. Audited patients did not tolerate higher doses. Hence only twelve patients achieved the maximum maintenance dose of 12mgs once daily. Some patients that reported side effects with perampanel remain on treatment (P=0.017).

The safety profile of perampanel has remained consistent and interim data from the on-going extension studies indicate that this will continue3. Dizziness, somnolence and headache were the main adverse effects resulting in reduction or termination of treatment13. These were apparent at doses of 8mgs and above and the risk was higher with polypharmacy. There were nineteen cases of aggression from the phase III trials; fifteen were taking perampanel at 8mgs or higher13. In the audit cohort, somnolence and dizziness were commonly reported. Behavioural alteration was evident among those with intellectual disability. Abnormal thoughts reported in the audit group were expressions of suicidal (n=2) and homicidal ideation (n=1). These patients had refractory epilepsy but no history of depression. Symptoms resolved with discontinuation of treatment. In the manufacturers product leaflet, suicidality is referred to in terms of a potential general risk in the context of AED therapy14. From the phase III extension study which includes over twelve hundred patients, six cases of suicidal ideation were reported, four of which required hospitalization11.One report of homicidal ideation emerged from study 304 of the phase III trials in a patient with a history of depression. This resolved one month after ending treatment7. In the audit cohort, two cases of SUDEP were identified, both had refractory epilepsy. One death emerged from study 304 of the phase III trials. This was thought to be cardiac related but SUDEP could not be excluded7.

Overall perampanel has been shown to be an effective adjunct. A small sample of participants is not representative of the greater epilepsy population, but provides a synopsis of the early Irish experience. Perampanel is associated with a consistent safety profile that looks set to continue3. For the most part, the audit findings are consistent with results from the phase II and phase III trials. One key finding highlighted behavioural alteration as a common adverse effect among those with intellectual disability. The serious side effects pertaining to suicidal and homicidal ideation indicate that it is prudent to observe for emotional changes when treating with perampanel. This audit demonstrates the potential of the epilepsy EPR for audit, research and for service performance monitoring, evaluation and future planning.

14. Mula M, Kanner AM, Schmitz B, Schachter S. Antiepileptic drugs and suicidality: an expert consensus statement from the task force on therapeutic strategies of the ILAE commission on neuropsychobiology. Epilepsia 2013; 54: 199-203.