The Newborn Hearing Screening Programme (NHSP) was established in Cork University Maternity Hospital (CUMH) in April 2011. Between April 2011 and July 2014, 42 infants were identified with a Permanent Childhood Hearing Impairment (PCHI). Following this diagnosis, infants underwent a paediatric assessment according to recognised guidelines with the intention of identifying the underlying aetiology of the PCHI. The aim of this study was to assess the findings of this aetiological workup via retrospective chart review. PCHI data was obtained from the eSP database. This is a web based information system (eSP) used to track each baby through the screening and referral process A retrospective chart review of these patients was performed. Sixteen (38%) infants were diagnosed with a bilateral sensorineural hearing loss. Two infants had congenital CMV infection. A Connexin 26 gene mutation was detected in one infant. Two infants were diagnosed with Waardenburg syndrome, One with Pendred syndrome and one with Pfeiffer syndrome. Five babies underwent cochlear implantation. Through adherence to the recommended protocol a possible cause of PCHI may be determined. This study has identified areas of future improvement for this service in Ireland.

Introduction
A newborn hearing screening programme (NHSP) was implemented in Ireland in April 2011. It was introduced in the Southern region of Ireland initially under the Health Service Executive (HSE) South at Cork University Maternity Hospital (CUMH). A phased roll-out nationally of the screening programme was completed by November 2013 across all 20 maternity hospitals in the Republic of Ireland1. Since 2011, approximately 100 infants per year are diagnosed with a permanent childhood hearing impairment (PCHI) in Ireland through this programme2. The ultimate goal of neonatal hearing screening is to reduce the age of diagnosis of hearing loss to three months and to undertake/commence amplification, fitting and enrolment in early intervention programmes by 6 months of age. The negative effects of hearing impairment can be reduced through effective intervention and management including hearing aid fitting, rehabilitative interventions and language and family support.

Newborn hearing loss can result from conductive, sensorineural and mixed defects. All children diagnosed with a hearing impairment should undergo aetiological investigations, the purpose of which is to determine the aetiology of hearing loss, to identify related physical conditions, to provide recommendations for medical treatment as well as referral to other services and family counselling. Following a diagnosis of PCHI, a recommended protocol to identify the aetiology is initiated in CUMH. This guideline was published by the British Association of Paediatricians in Audiology and endorsed by the British Association of Audiological Physicians. In 2015, BAAP guidelines were published for aetiological investigation into unilateral PCHI, bilateral severe to profound PCHI and mild to moderate bilateral PCHI. The aim of this paper is to review the findings of the aetiological investigations performed on infants diagnosed with PCHI in CUMH between April 2011 and July 2014.

Methods
Forty-two infants identified through the NHSP with a PCHI from April 2011 to July 2014 in CUMH were included in this study. PCHI data was obtained from the eSP database. This is a web based information system (eSP) used to track each baby through the screening and referral process All infants diagnosed with a PCHI in CUMH were referred to a designated paediatrician and followed a UK guideline of aetiological investigations. A retrospective chart review of these patients was performed.

Results
Between April 2011 and July 2014, 27,812 infants were eligible for newborn hearing screening in CUMH and of these 27,451 (98.7%) underwent hearing screening. Forty-two infants were identified with a PCHI between April 2011 and July 2014 in CUMH, 20 female infants and 22 male infants. Figure 1 illustrates the types of hearing loss identified. 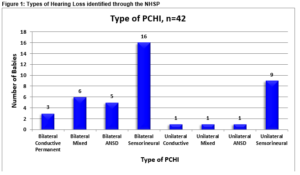 Two distinct hearing screening protocols are utilised in CUMH. One for well infants and one for infants admitted to the NICU for more than 48 hours. Infants cared for in the NICU are at increased risk of neural hearing loss3. The well baby protocol involves an automated otoacoustic emission test (OAE). All NICU babies follow a two stage screening with OAE testing and auditory brainstem response (ABR) testing in order to capture the higher incidence of hearing loss observed in this cohort. Eighteen (43%) infants were screened using NICU protocol and 24 (57%), through the well baby protocol as per Figure 2. 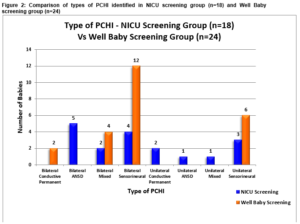 There was no case of congenital rubella, syphilis or toxoplasma infection. Two (5%) babies were confirmed with a congenital cytomegalovirus infection. An aminoglycoside was administered to 9 (21%) infants in the neonatal period, the most frequent of which was gentamicin. There were no cases of viral or bacterial meningitis. Eleven (26%) had a positive family history for hearing loss, 8 (19%) of which were first degree relatives. There were no cases of consanguinity. Twenty-three electrocardiograms were performed, all were reported as normal. Urinalysis was performed on 23 (55%) patients all of which were normal. Eight (19%) infants were diagnosed with a specific genetic syndrome, as illustrated in Table 1.

Group
One (2%) baby has a confirmed DFNB1 mutation and two (5%) infants are heterozygous carriers of this mutation. The DFNB1 locus contains genes that code for Connexin (transmembrane proteins that serve as potassium channels in the inner ear). Mutations of this locus constitute the commonest genetic cause of non-syndromic deafness. One patient was found to have two alterations of the SWLC26A4 gene. This gene translates to the protein Pendrin. Mutations of the genes coding for Pendrin are associated with sensori-neural hearing loss, enlargement of the thyroid gland, enlargement of the vestibular aquaduct and malformation of the cochlea. Nineteen (45%) of the 42 infants were assessed by Ophthalmology. Twelve (26%) assessments were reported as normal and 7 (17%) abnormal. Three of the 7 infants with an abnormal ophthalmology examination were diagnosed with a genetic syndrome, one baby with Down Syndrome, one with Patau syndrome and one with Pfeiffer’s syndrome. Of the 14 babies (33%) MRI Brain studies performed, 10 (23%) of which were reported as abnormal. Abnormalities included; hydrocephalus, structural malformations and abnormal myelination patterns. An abnormal MRI Brain of an infant with congenital CMV infection demonstrated a leukoencephalopathy with white matter cysts consistent for this infection.

Ten (23%) infants with bilaterally profound hearing loss were assessed for cochlear implantation. Five (12%) babies have undergone cochlear implantation. Of the 10 infants with a profound bilateral hearing loss, two infants were confirmed with a genetic syndrome and one with a connexion mutation. With regard to the 7 infants diagnosed with ANSD hearing loss, 5 (71%) were diagnosed with a bilateral ANSD hearing loss and two (29%) with a unilateral ANSD hearing loss. Six out of 7 (85%) of this group were born prematurely and all were admitted to the neonatal unit. Six of these infants had MRI Brain scans performed. Five were reported as abnormal with reports describing extensive cystic periventriuclar leukomalacia and obstructive hydrocephalus. Two babies with ANSD hearing loss were treated for significant sepsis in the neonatal period, one baby with Klebsiella and coagulase-negative staphylococcal (CONS) sepsis and a second infant with E. Coli sepsis.

Discussion
From April 2011 to July 2014, the CUMH NHSP was successful in identifying PCHI in 42 infants, a prevalence of 1.5 per 1000 live births. In CUMH, following the diagnosis of PCHI, all parents were offered detailed paediatric assessment. The referral for paediatric review is initiated by the hospital audiologist once a definitive hearing diagnosis is made. Patients are seen within three to four months due to demands on waiting lists. This pilot programme to establish the aetiology of PCHI commenced in CUMH utilised established UK guidelines4. Internationally, following an aetiological workup a cause for PCHI is identified in approximately 50% of cases5. Early diagnosis of PCHI has numerous benefits including facilitating interventions at a young age and improved language acquisition6-9. Every infant with a PCHI should be referred for medical evaluation. The purpose of these evaluations is to determine the aetiology of hearing loss, to identify related physical conditions, and to provide recommendations for medical treatment as well as referral for other services. Of great importance is cytomegalovirus (CMV) infection screening which must occur in a prompt fashion in order to facilitate early initiation of Ganciclovir therapy for CMV positive infants. Other essential components of the medical evaluation include clinical history, family history, and physical examination as well as indicated laboratory and radiologic studies.

At present there are no specific Irish guidelines for the aetiological work up of babies with a PCHI. There is no designated funding to perform such diagnostic workups or specialised long-term follow up programme. Currently, in Ireland, we have established a structured and efficient NHSP without establishing an equally cohesive follow up programme for babies diagnosed with a PCHI. This leads to heterogeneous practice in terms of the aetiological investigation of infants identified with a PCHI across Ireland, where management of such patients is dictated at a local level. Steps need to be put in place by the HSE to address these issues. However, this issue is not unique to Ireland and several publications have called for a more unified approach to the management of these patients across various European countries10-12

Our review has demonstrated the benefit of adherence to a recommended protocol to identify the possible cause of PCHI. We accept and recognise the deficits of this study, it was retrospective in nature, investigations were not performed based on the type or severity of the hearing loss, every patient did not receive an ophthalmology review and urine collection was not ensured for cytomegalovirus studies on every patient as patients did not always pass urine for testing at their outpatient appointment and were not consistently followed up for a urine specimen.

The purpose of early screening and workup is to optimise an individual’s potential for integration into society and future employment. We know early intervention works and is cost effective19-21. It is vital that a cohesive effort across Ireland with closer cooperation among stakeholders is established to ensure fair treatment and equal access for all with a PCHI to specialised services. This is an opportunity to create such a structured, comprehensive approach to infants diagnosed with a PCHI though the Irish NHSP.

Funding Statement
This research received no specific grant from any funding agency in the public, commercial or not-for-profit sectors.