Acute Flaccid Paralysis (AFP) surveillance, including case investigation and specimen collection is a gold standard method for poliomyelitis surveillance. The expected annual non-polio AFP rate <15 years of age in Ireland is ≥1/100 000 population. This study reviewed all cases of AFP reported to the Irish Paediatric Surveillance Unit and the Health Protection Surveillance Centre between January 2009 and December 2014 and compared reporting rates with the expected incidence rate annually. We assessed quality of surveillance data in terms of completeness of investigation for each case reported. Forty-three AFP cases in children <15 years were notified; 35 of which were confirmed. Guillain-Barré Syndrome (GBS) accounted for 48.6% (n=17) of AFP notifications. In 2014, the expected annual AFP target rate was reached. This study identified possible under-reporting of AFP paediatric cases in Ireland between 2009-2013. Completeness of investigations has improved over time, but requires further work.

Poliomyelitis (polio) is a highly infectious disease caused by poliovirus and is transmitted person-to-person via the faecal-oral route. The incubation period is 7-14 days for paralytic cases, but can range from 3-35 days. Cases are most infectious during the days before and after onset of symptoms when the virus is excreted.1 Prior to the introduction of polio vaccines, poliomyelitis was the most important cause of AFP in children. AFP is a clinical syndrome characterised by rapid onset of weakness or paralysis of one or more limbs, or respiratory or bulbar muscles, resulting from damage to nerves that supply the muscles. The term ‘flaccid’ indicates the absence of spasticity or other signs of disorders of the central nervous system motor tracts such as hyperreflexia, clonus, or extensor plantar responses.2 AFP surveillance in children <15 years of age is used in poliomyelitis surveillance for monitoring the progress towards polio eradication.3 AFP surveillance is a sensitive tool for detecting a potential case of polio and reflects the ability of a health system to identify and respond to imported polio in a timely and effective manner. Many countries use AFP surveillance to support documentation relating to polio-free certification. Alternate methods include environmental surveillance4 which is not implemented in Ireland and non-polio enterovirus surveillance.5 Ireland undertakes non-polio enterovirus surveillance by investigating and characterising a small number of these clinical cases.

Ireland has been polio-free since 1984.6 AFP surveillance in children <15 years of age was conducted in collaboration with paediatric hospital consultants, National Virus Reference Laboratory (NVRL), and Health Protection Surveillance Centre (HPSC) since 1998. In 2009, HPSC strengthened surveillance efforts through initiating collaboration with the Irish Paediatric Surveillance Unit (IPSU) which undertakes surveillance of rare and uncommon childhood infections and disorders.1 IPSU sends monthly report cards to hospital paediatricians asking them to indicate if they have ‘nothing to report’ or to mark the number of new cases of each condition listed that they have seen in the previous month. IPSU communicates any report indicating that an AFP case has been reported to HPSC which then sends out two standardised enhanced surveillance forms (available http://www.hpsc.ie/A-Z/VaccinePreventable/Polio/SurveillanceForms/) to the reporting clinician for completion. Completed forms are returned to HPSC by secure fax or mail and data are entered into a MS-Access database. Under the National Polio Plan for Ireland 20141, strengthening of AFP surveillance in children <15 years of age, together with investigations for enteroviral/polio virus specific infection using stool samples, is recommended.

Although the European Region of the World Health Organisation (WHO) has been polio free since 20028, the risk of international spread of Wild Poliovirus type 1 (WPV1) is still present. Since May 2014, WHO issued temporary recommendations to reduce the spread of wild poliovirus into polio free countries under the International Health Regulations (IHR), specifying polio vaccination for travellers to and from very high risk countries.9 WHO also developed indicators which assess the quality of the AFP surveillance programme. In a non-endemic country such as Ireland, ≥ 1 non-polio AFP case per 100,000 children < 15 years of age annually is expected.10

All cases of AFP in children <15 years reported to IPSU and onwards to HPSC between 2009-2014 were reviewed. An AFP case was defined as an acute onset of focal weakness or paralysis characterised as flaccid without other obvious cause in children <15 years of age.1 During follow up investigation, AFP cases were classified by the clinician as either ‘confirmed AFP’ (meeting clinical criteria), not AFP (failing to meet clinical criteria) or with no further information provided and classified as ‘unknown/not specified’. Data were extracted from the MS-Access database and analysis performed using MS-Excel. The number of cases reported and data completeness of AFP cases were compared against WHO standards. For the purposes of calculating incidence rates, 2011 Irish census data were used.11

Of the 43 AFP cases reported to IPSU; 35 were ‘confirmed AFP’; four cases were reported as ‘not AFP’ upon further contact with the clinician and four cases had no additional data received. The number and rate of confirmed AFP cases improved over time, and by 2014 the expected incidence rate threshold of ≥1/100,000 age specific population (< 15 years of age) was reached (1.02/100,000) (Figure 1). Less than 50% (n=17) of confirmed cases were reported within one month (30 days), of onset of paralysis. A noticeable increase in cases was observed during late summer/early autumn, with 5 cases each developing onset of paralysis in July, August and September (Table 1). 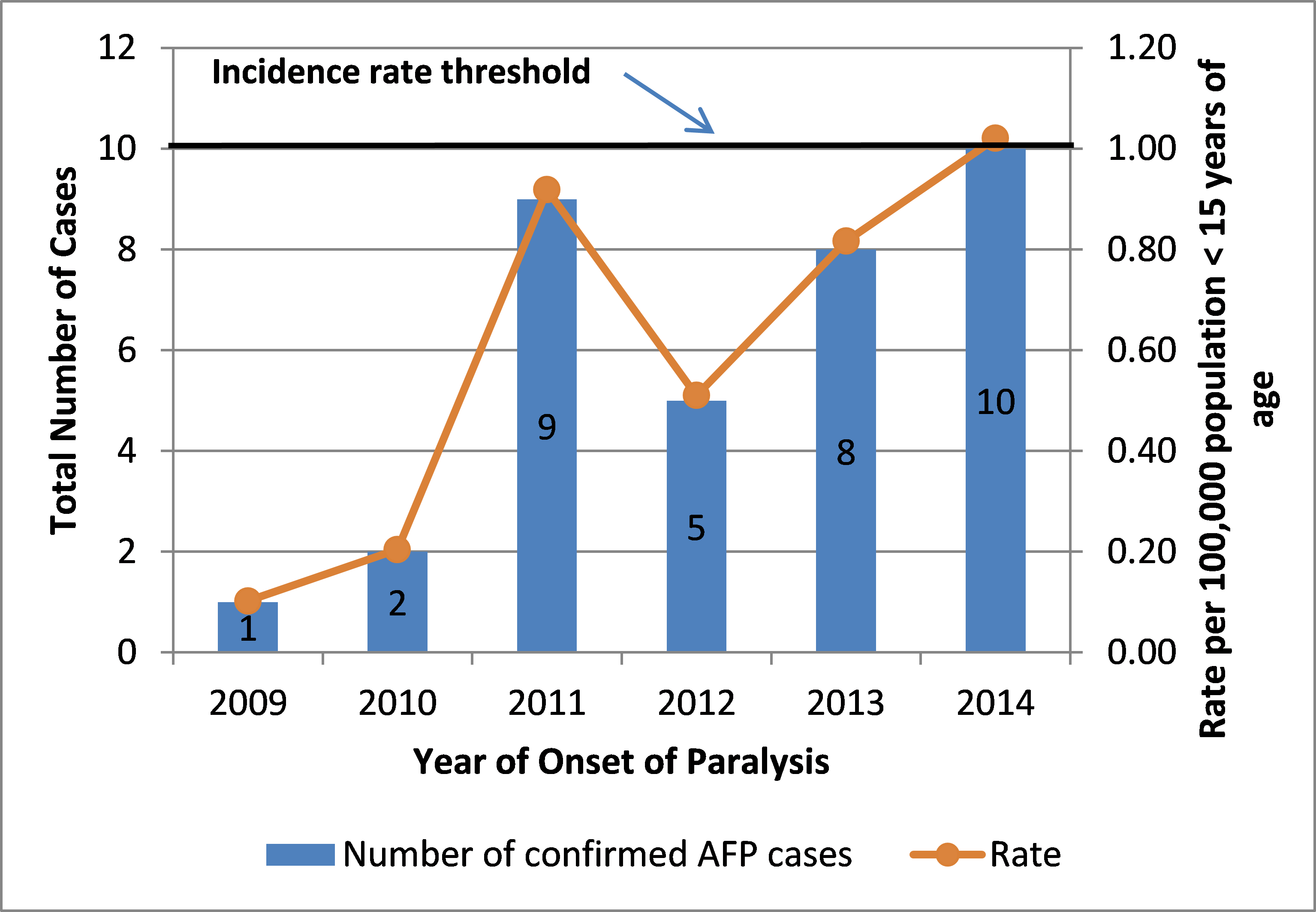 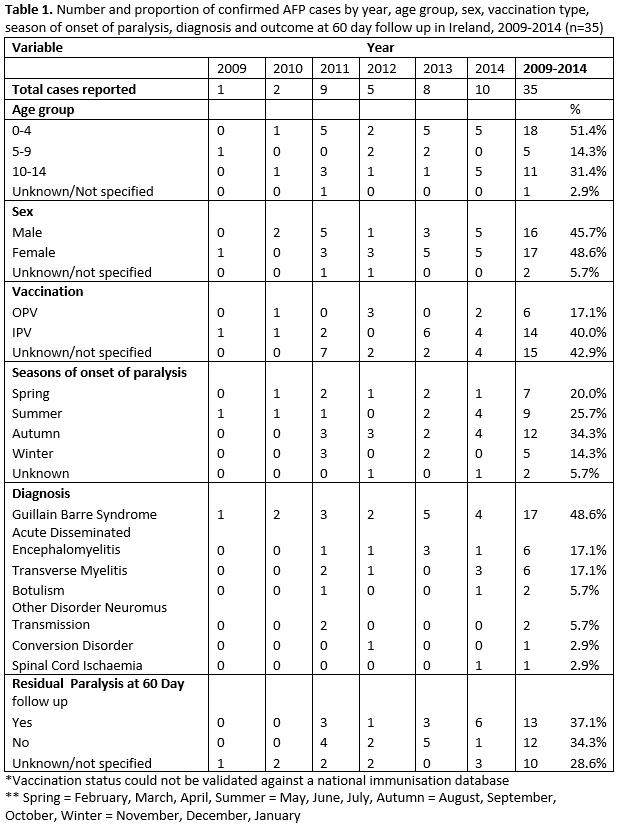 Guillain-Barré Syndrome (GBS) was the most frequently reported syndrome (48.6%, n=17). Among those with GBS, 41.2% were in the 0-4 year age group followed by 35.3% in the 10-14 year age group. Details of other causes are presented in Table 1. For each AFP case, a range of clinical and diagnostic investigations were undertaken including spinal MRI, LP, nerve conduction studies and EMG. However, it was not possible to determine which combination of tests determined the final diagnosis. It was not possible to identify the length of follow-up of each case as discharge date was not reported. Some cases may also have been followed up longer than 60 days. Information on residual paralysis at 60 days follow-up was available for 71% (n=27) of cases, with a total of 17.1% having residual paralysis at 60 days (Table 1). 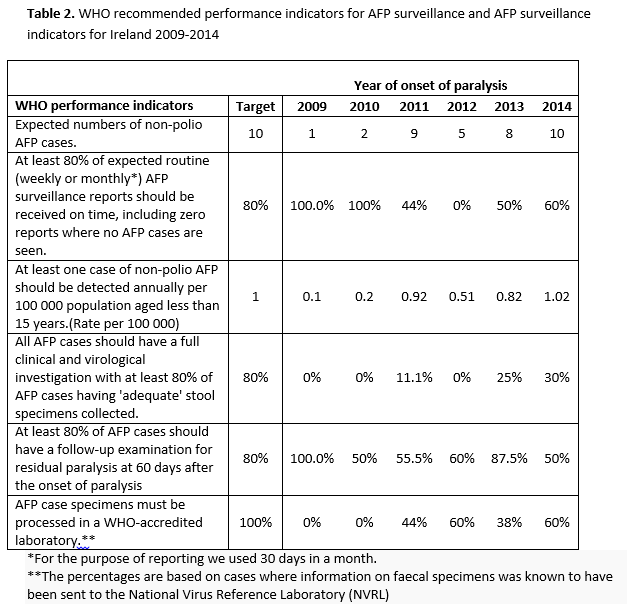 This review highlights possible under-reporting of AFP cases between 2009 and 2013. AFP reporting was consistently below the expected target, however a marked improvement in reporting of cases was observed in 2014. Between 1998 and 2009, 38 confirmed AFP cases were reported, of which 27 cases were GBS: an average of less than 2 cases per year. This study did not review the cases reported during this period as a different surveillance system was in place. Although under-reporting is based on the international expected incidence, the validity of the incidence rate can depend on the size of the population with smaller population sizes being more at risk to the random chance of not meeting the target.12 A study by Desai et al.13 does not support this with Canada, the country with the largest <15 population having met the target once, and New Zealand, the smallest < 15 population having met the target twice. This study found the quality of data improved regarding the total number of cases reported since 2009 with a marked increase in notifications from 2011 when additional resources (research nurse) were mobilised to tackle issues surrounding communication, collaboration and completion of enhanced surveillance forms.

Despite improvements in 2014, timeliness of reporting remains a weakness particularly due to monthly IPSU reporting. Delays were also observed with only 17 confirmed cases (48.6%) reported within one month of onset of paralysis. In 2014 AFP notifications increased and coincided with an increase in notification of enterovirus related viral meningitis14 and campylobacter infection.15 However, it was not possible to establish if these AFP cases were associated with either of these infections. GBS was identified as the main cause of AFP, with 48.6% of confirmed AFP cases having this as their final diagnosis. Similar findings were observed elsewhere.13,16-22 The relatively poor quality of Irish AFP surveillance data compared to WHO recommended performance standards is a concern and highlights the challenges required in improving timeliness and earlier investigation of cases. The failure to routinely obtain and send faecal specimens for virology testing requires greater awareness and specific protocols at the ward setting, whereby children presenting with AFP have these samples sent, similar to other tests done on admissions. In this review, only six out of 35 (17.1%) confirmed cases had the appropriate number of faecal specimens sent for laboratory investigations at least 24 hours apart and within 14 days of paralysis.

As a result of this study, the enhanced surveillance form was reviewed: additional information will be gathered prospectively ensuring that vaccination data will be GP-validated and that NVRL-identified pathogens and data on nasopharyngeal aspirates will be included. Continued collaboration between IPSU, HPSC and NVRL is vital to ensure all cases are thoroughly investigated and reported in a timely manner. The lack of data completeness is evident from this review, with eight cases not having a final diagnosis made/provided and final outcome data only available on 81.4% (n=35). Duplicate reports from different clinicians (primary referring clinicians and then secondary clinician) is a possibility as the IPSU reporting form does not request patient identifiers when clinicians report cases. In recent years, developed countries such as Bulgaria, Canada and Australia have experienced importation of polio.23,24 Despite successes regarding polio control since the World Health Assembly launched its initiative aimed at eradicating poliomyelitis by 2000,3 the continued transmission in some countries poses a risk for other polio free countries. During 2014, most cases occurred in the known endemic countries (Pakistan and Afghanistan), however 19 polio cases were the result of international spread of wild polio virus highlighting the continued risk to all countries.25 Limitations such as lack of data completeness and possible under-reporting of AFP cases are evident from this study. It is possible more cases of non-polio AFP among children <15 years of age were seen in Ireland, but not reported.

This study reviewed the progress in AFP surveillance in Ireland and evaluated the value of additional HPSC-led follow-up. To improve this surveillance, on-going commitment to improve knowledge and collaboration between all clinical teams involved in caring for children presenting with AFP is recommended.

We would like to acknowledge the valuable input and support from the IPSU, the NVRL, the consultants and their clinical teams in supporting AFP surveillance in Ireland.