Shiitake (Lentinula edodes) is the second most commonly consumed mushroom worldwide. The first case of shiitake mushroom flagellate dermatitis was described in Japan in 1977 and it is now being reported in the western world. We describe the first reported case in Ireland.

Shiitake (Lentinula edodes) is the second most commonly consumed mushroom worldwide1. It is used in Asian medicine for its anticarcinogenic, antihypertensive and lipid lowering properties2. Furthermore, extracts of these mushrooms are used in over-the-counter dietary supplements designed to improve the immune system1. The first case of shiitake mushroom induced flagellate dermatitis was described in Japan in 1977 and it is now being reported in the western world3. After literary review and consultation with the Irish National Poisons Information Centre, we believe this is the first reported case of shiitake flagellate dermatitis in Ireland.

Case Report
A 53-year-old lady presented to the dermatology outpatient clinic with an intensely itchy widespread linear rash. Past medical history included hyperlipidaemia and a known allergy to hair dye. She had not used any hair dye recently nor taken any new medications. Clinical examination revealed a florid, oedematous, erythematous linear eruption, arranged as extensive parallel streaks on the neck, trunk and limbs, Figure 1. There was no dermographism. Mucosal surfaces were normal. Blood tests showed an elevated CRP 42 mg/L (norm.: 0 – 5). The other routine laboratory parameters were normal, including electrolytes, renal function, complete blood count and liver function. Skin biopsies demonstrated a non-specific spongiotic dermatitis with marked oedema of the papillary and reticular dermis.

On detailed questioning the patient reported eating shiitake mushrooms at an Asian restaurant two days prior to the onset of the rash. Based on the classical clinical pattern of whiplash-like eruptions and history of eating shiitake mushrooms, we made a diagnosis of shiitake mushroom induced flagellate dermatitis. She was treated with a five day course of oral prednisolone, followed by topical steroid therapy. Chlorphenamine was prescribed for the pruritis. The rash resolved after four weeks. Subsequent patch testing confirmed an allergy to p-Phenylenediamine, the main constituent of hair dyes. 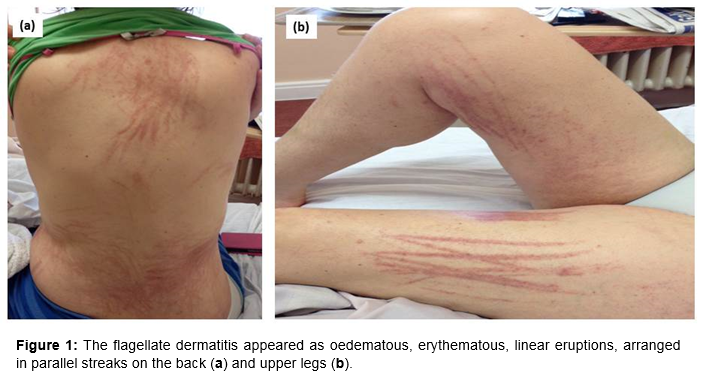 Controversy surrounds the exact pathogenesis of shiitake flagellate dermatitis. Most agree that the polysaccharide lentinan is the culprit. This theory is supported by reports of flagellate dermatoses in patients treated with intravenous lentinan in Japan as adjuvant chemotherapy5. In addition, Lentinan is broken down by heat which may explain why the dermatitis usually only occurs following ingestion of raw or partially cooked shiitake mushrooms1.

Disagreement begins when debating exactly how the lentinan causes the dermatitis. Some believe the polysaccharide has a direct toxic effect, causing interleukin-1 secretion, leading to vasodilatation, haemorrhage and eruption6. Others argue an allergic process given the relative rarity of the disorder despite widespread consumption but patch testing to shiitake has had variable results7-9.

There is a delay between ingestion and the eruption - usually 24 to 48hrs – which can complicate the diagnosis. Laboratory findings are non-specific10. Diagnosis is based on the classical appearance and history of shiitake ingestion. Histology from skin biopsies are non-specific showing features such as epidermal spongiosis and perivascular, cuff-shaped lymphocytic dermal infiltrates4.

The condition is self-limiting. Symptomatic treatment includes emollients, topical steroids, and antihistamines. Short courses of oral steroids may be required in severe cases such as ours. In shiitake flagellate dermatitis the skin lesions resolve within two to four weeks, without scarring. In contrast, flagellate dermatitis caused by bleomycin can cause hyperpigmentation which lasts for several months4. Repeated consumption of shiitake typically elicits recurrence so should be avoided10.

The authors have no conflicts of interest to declare. No funding was obtained for any part of the completion of the manuscript.