Type 1 diabetes (T1D) symptoms are subtle and easily overlooked. Delayed diagnosis can result in Diabetic ketoacidosis (DKA), a life threatening complication with lasting consequences. We sought to define the presenting features of T1D and DKA frequency, in children <15 years diagnosed in a single national tertiary centre, and identify predictive factors for DKA. A review of T1D incident cases was undertaken from 2008-2012 using the National Diabetes Register (ICDNR) and clinical case notes. Data were compared with a 1997/8 national study. We found DKA at presentation in 28.7 % of children and 15.5% had moderate/severe DKA. Commonest symptoms were polydipsia, polyuria, weight loss, and lethargy. Median symptom duration was 17 days. Clinical presentation was similar and frequency of DKA at T1D diagnosis remains high. The proportion with moderate/severe DKA is lower than the 25% previously reported (p=0.038). National monitoring and targeted action to reduce DKA at diagnosis is required.

Introduction:
Type 1 Diabetes (T1D) is a common endocrine condition in children with approximately 79,100 children under the age of 15 years diagnosed worldwide every year1. The incidence of T1D has increased in most European centres by three to four percent annually, although increases are not uniform over time2,3,4. In Ireland the incidence rate of T1D increased substantially from 16.3 to 27.5 cases/100,000/year between 1997 and 20085, and has remained effectively unchanged between 2012 and 20134. At diagnosis children may present with the life-threatening complication of Diabetic Ketoacidosis (DKA), a severe metabolic decompensation characterised by hyperglycaemia, acidosis and ketonaemia/ketonuria. DKA is defined by the International Society for Paediatric and Adolescent Diabetes (ISPAD) as: blood glucose >11 mmol/L, venous pH <7.3 or bicarbonate <15 mmol/L, and ketonaemia/ketonuria6. The degree of acidosis varies from mild to severe and as acidosis increases, the risk of life threatening complications such as cerebral oedema rises. In addition to the immediate risks, DKA, also appears to affect the longer term clinical course of T1D resulting in inferior glycaemic control, diminished residual β cell function and remission rates7,8.

Globally, DKA at diabetes diagnosis is concerning and estimates of frequency vary widely in different populations, ranging from 12.8-80%9. A Eurodiab study exploring the frequency of DKA at diagnosis in Europe and Israel reported frequencies of 26-67%10. Comparison between studies is challenging due to the use of different definitions of DKA and methodology. The previous Irish national study undertaken from January 1st 1997-December 31st 1998 reported a high rate of DKA at diagnosis, with 25% of children presenting in moderate/severe DKA, defined as blood glucose >15 mmol/L, urinary ketones +2, pH <7.2, HCO3–<15 mmol/L, and clinical symptoms11. In general, countries with higher disease incidence and greater affluence are reported to have a lower prevalence of DKA at diagnosis10. It is postulated that these countries have a much greater awareness of the signs and symptoms of T1D prompting earlier medical attention and diagnosis.

Our study from a single national tertiary centre sought to explore the clinical presentation and frequency of DKA at diagnosis in comparison with the previous national study11 to define if the presenting characteristics including the frequency of DKA have changed as the incidence of T1D has increased in the Irish population. We reviewed the presenting symptoms and signs associated with the occurrence of DKA in newly diagnosed children with TID in order to identify possible early predictors of DKA.

Methods
A retrospective review of incident cases of T1D in a single national tertiary centre during the period 2008-2012 was undertaken. The National Children’s Hospital, Tallaght (NCH) is one of three paediatric national tertiary centres for T1D in Dublin, Ireland. Ethical permission was granted for the study by the SJH/AMNCH Research Ethics Committee. Incident cases were prospectively recorded, clinical presentation and demographic data were ascertained with data obtained from the Irish Childhood Diabetes National Register (ICDNR) and review of clinical case notes. DKA was defined using the ISPAD criteria on the initial bloods at presentation.  Ketoacidosis was categorized by severity of acidosis, as: mild (blood pH < 7.3); moderate (pH < 7.2); and severe (pH < 7.1)6. Data were analysed using SPSS version 22. Statistical techniques employed included appropriate descriptive statistics and the Chi-square (χ2) test, with exact tests undertaken where numbers are small. 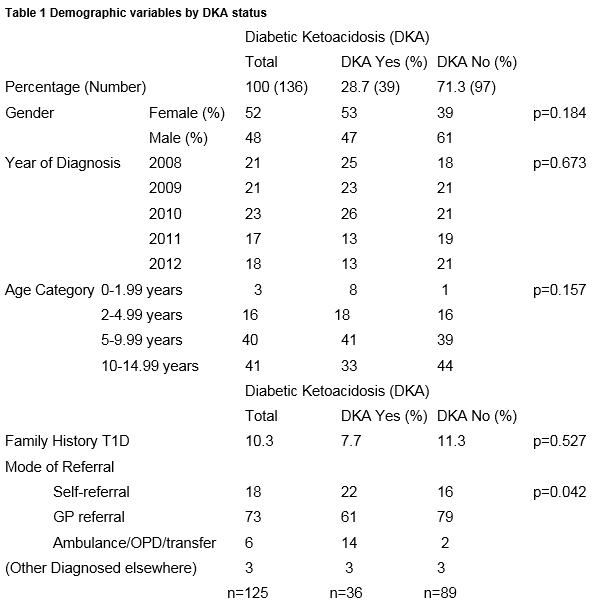 There was no significant difference between the groups of DKA versus Non-DKA regarding gender, year of diagnosis, age category, family history or mode of referral (Table 1) but it is important to remember that the sample sizes are small. Children presented with a variety of common symptoms (Table 3); polydipsia, polyuria, weight loss and lethargy. Children with DKA were more likely to report vomiting (p=<0.001), dehydration (p=<0.001), infections (p=<0.004), weight loss (p=<0.022) and lethargy (p=<0.035). (Table 2). Only 5 patients (3.7%) were brought to Hospital by ambulance. 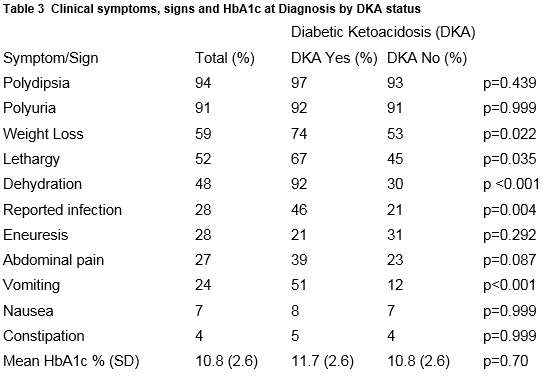 Symptom duration was difficult to measure and had a wide range. Information regarding symptom duration was available for 135/136 children, where a range was provided, the midpoint was chosen. The median symptom duration was 17 days, with an interquartile range of 27 and a range of 1 – 365 days. Due to these limitations the duration of symptoms was not included in further analysis. An interesting group were those aged less than two years. Although only four patients were in this group, three presented in DKA, with one being severe. Their initial pH results were: 7.35; 7.27; 7.21; 6.98 and HbA1c’s were: 8.2; 10.7; 9.3; and 9.1% respectively. None had a family history of T1D in a first degree relative. Duration of symptoms was variable at 3, 5, 21 and 28 days. Those with a shorter duration of symptoms, three and five days, had infection at the time of presentation, one of whom presented in severe DKA.

Discussion
The frequency of occurrence of the life-threatening complication of DKA at the time of diagnosis of T1D is highly variable. Many studies are not directly comparable due to the use of different definitions of DKA, age bands and time frames. Some studies report markedly different rates within the same country while others show rates of DKA that are stable over relatively long periods of time12,13,14. In this study from a single national tertiary centre using the standard ISPAD definition we report an overall rate of DKA at presentation at 28.7%. The overall rate of DKA at diagnosis in this study is similar to that reported in three UK studies (26 to 27.2%) from 1994 to 2009 15,16,17. A previous national analysis of the clinical presentation of children with T1D reported that 31% of incident cases had DKA of any severity and 25% had moderate/severe DKA at presentation, with those aged under two years most affected11.

This study shows that while the frequency of DKA at diagnosis remains high, the rate of moderate/severe DKA at presentation at 15.5% is significantly reduced from the 1997 national study. This reduction in moderate/severe DKA occurs in the context of a marked increase in national incidence rates of T1D and likely increased diabetes awareness. During the time frame (1997-1998) of the previous national study the directly standardised incidence rate (IR) for T1D in Ireland was 16.3 cases/100,000/year11. By 2008 the standardised national incidence rate had increased to 27.5 cases/100,000/year and remained relatively stable in the period 2008-2012 at this higher incidence rate4,5. A higher background incidence rate is usually coupled with a lower rate of DKA at presentation, likely due to greater diabetes awareness9,10,18 although this finding is not universal12,14,20. Finland which has the highest incidence of T1D in the world, reported a lower DKA rate of 19.4% overall and 4.3% for severe DKA18. As the incidence of T1D in the Irish population has markedly increased the frequency of presentation in moderate/severe DKA has fallen in our centre.

We found no differences between gender and age and presentation in DKA. Those aged less than two years are recognised to be particularly vulnerable to DKA11,14,18. As we had only four in this age category it is difficult to draw firm conclusions, although three of the four did present with DKA. This is similar to findings from Poland, Finland, and Germany3,18,19,20. Others have suggested beyond the age of two years that DKA becomes more common with increasing age. Jefferies et al found the odds of DKA at initial diabetes presentation increased 1.06 times per year of increasing age from two-fourteen years14. Some studies have suggested that presentation in DKA is less likely where there is a family history of T1D where parents are more attuned to the symptoms of T1D prompting an earlier diagnosis7,8,21,22. We found a family history of T1D in a first degree relative to be similar in those with and without DKA at presentation (p=0.527) and relatively unchanged at 10.3% since previously at 10.2%11.

Findings suggest that differences in DKA rates between countries may in part be due to factors relating to awareness of T1D in childhood and variation in healthcare systems. As these factors are receptive to change, this offers potential to prevent DKA at diabetes diagnosis. The prevention of long term adverse effects of severe metabolic decompensation at diagnosis is an important therapeutic target.

The classical symptoms of polyuria, polydipsia, and weight loss remain the main presenting symptoms of childhood Type 1 diabetes. Secondary enuresis is less frequent but important11. There was significant difference in the prevalence of vomiting and dehydration in those with DKA, as vomiting and dehydration are recognised features of ketoacidosis. That only 5 children (3.7%) were brought to Hospital by ambulance is consistent with the observed practice that the vast majority of children in Ireland attending the ED are brought by their parents irrespective of disease severity.

In conclusion, this study found the rate of DKA at diagnosis remains high at 28.7% but the rate of moderate/severe DKA was much lower at 15.5% than two decades ago. The frequency of severe DKA remains high at 11.8%. The presenting symptoms, age, variations, and proportion with a positive family history in a first degree relative were similar. A limitation of this study is that it is from a single centre and may not be nationally representative, as its findings could reflect referral patterns and increased awareness amongst our referring clinicians. Additionally, some of the statistical tests were limited by the small numbers. However, this important snapshot demonstrates that rates of DKA in the ROI remain too high. A national study is required to further explore these issues.

This study emphasises the need to increase awareness of the symptoms of childhood diabetes to encourage earlier diagnosis and prevent DKA. It reinforces the need for national monitoring of DKA rates and targeted action to reduce the frequency of DKA at diagnosis in Irish children. Persisting high rates of DKA at diagnosis has prompted successful education campaigns in several countries in particular, Italy’s well-known ‘Parma Campaign’. This campaign was effective in reducing the frequency of DKA at diagnosis from 78% to 12.5%21. A collaborative national DKA prevention programme with the support of the ICDNR and Diabetes Ireland commenced in 2016.

Conflicts of Interest
None declared.