Aim
The aim of this study was to assess skin cancer awareness and identify the UV protective measures used by golfers within the Munster region of Ireland.

Methods
Subjects were recruited from throughout the Munster region at a regional competition, and at three other local golf clubs and “pro” shops. Participants filled out a short anonymous validated questionnaire when collecting their score cards7.

Results
One hundred and sixty-three golfers completed the questionnaire with a mean age of 65.6 years. 137 (84%) were male and 26 (16%) were female. We noted a high incidence of both non-melanoma and melanoma skin cancer in our subjects. Sixteen (9.8%) had a previous history of skin cancer, with 8 melanomas and 8 non-melanoma skin cancers. A high percentage, 85%, of the golfers surveyed were compliant with SPF use. However many were using too low a SPF, 63 (44%) were using a SPF less than 30. Knowledge of risk of skin cancer is better amongst the golfers surveyed when compared to the general population. Most respondents (N = 96 (59%)) were aware that melanoma can lead to death if left untreated and 114 (70%) recognized that melanoma can be cured if treated early.

Conclusion
Golfers may benefit from targeted education emphasizing the importance of higher SPF use. Other interventions that may benefit this population would include availability of sunscreens and educational literature in ‘pro’ shops at golf courses.

Introduction
Approximately 25% of all cancers in Ireland are made up of non-melanoma skin cancers (NMSC) with melanoma skin cancer (MMSC) accounting for a further four percent1. The incidence of both NMSC and melanoma has increased over the last decade in keeping with many other cancers. However, unlike many other cancers, melanoma is often seen in younger age groups and represents the fifth most common cause of cancer related mortality in individuals less 50 years old in Ireland1. There is a definite link between ultraviolet radiation (UVR) exposure and all skin cancers2. It is felt that intermittent exposure to intense UVR is more damaging and those who enjoy recreational activities outdoors are at increased risk3,4,5. Screening for cancers and early diagnosis has led to a significant reduction in some cancer associated mortality rates. Public awareness campaigns and the easy visualization of skin changes should facilitate patients with skin cancer presenting earlier for assessment6. Given that early diagnosis allows for treatment of skin cancers when they are less advanced, this has obvious beneficial therapeutic implications. The awareness of skin cancer risk amongst golfers is widely reported in the USA. The USPGA has actively promoted UV protective measures since 2012. Despite many high profile golfers developing skin cancer, a general appreciation of the need to use sun protective measures is uncertain in Ireland. The objective of this study was to assess skin cancer awareness and identify the UV protective measures used by golfers within the Munster region of Ireland. We hope to use this information to improve the design of future public awareness campaigns. Furthermore, it can be used as a baseline against which the benefit of any future public awareness campaigns can be compared.

Methods
Subjects were recruited from throughout the Munster region at a regional competition, and at three other local golf clubs and “pro” shops. Participants filled out a short anonymous validated questionnaire when collecting their score cards7. The questionnaire was published in an open access article distributed under the terms of the creative commons attribution licence, thus permission for use was not required. All golf clubs approached participated in the study however the number of members who did not participate was not recorded.

Results
One hundred and sixty-three golfers completed the questionnaire with a mean age of 65.6 years. Demographics and results are shown in Table 1. Virtually all respondents (N=157 (96%)) golfed on a weekly basis or more often. A surprising proportion 79 (48%) of the respondents denied having any moles. However, 19 (12%) noted moles with an irregular edge or colour. A considerable number of respondents, 24 (15%), had seen their GP regarding a skin lesion in the preceding 6 months. However, 139 (85%) felt it would be unlikely or very unlikely that they would attend their GP in the next 6 months. This included fifteen who had noted a mole with an irregular colour or edge. Approximately two-thirds (68%) of the subjects reported that they checked their skin. The remaining subjects did not check their skin regularly. One hundred and thirty-nine (85%) of the golfers use SPF (sun protection factor) when golfing. However, 63 (44%) were using a SPF less than 30. The majority of the golfers surveyed (N=122 (74%)) use a hat when golfing. However, most wear a baseball cap (86; 52%) instead of the recommended hat with an all-round brim. More than half of all respondents (N=94 (58%)) admitted to trying to get tanned at home or on holidays. Sun holidays were popular within the group surveyed with 84 (52%) going on 5 or more holidays in the past 5 years. When asked what they would do if they noticed a new mole, 101 (60%) responded that they would visit their General Practitioner. However, the remaining subjects reported they would ignore it or ask a partner or friend for their opinion. In the event of a new mole developing, most subjects recognized (N = 114 (70%) that an urgent review would be indicated. 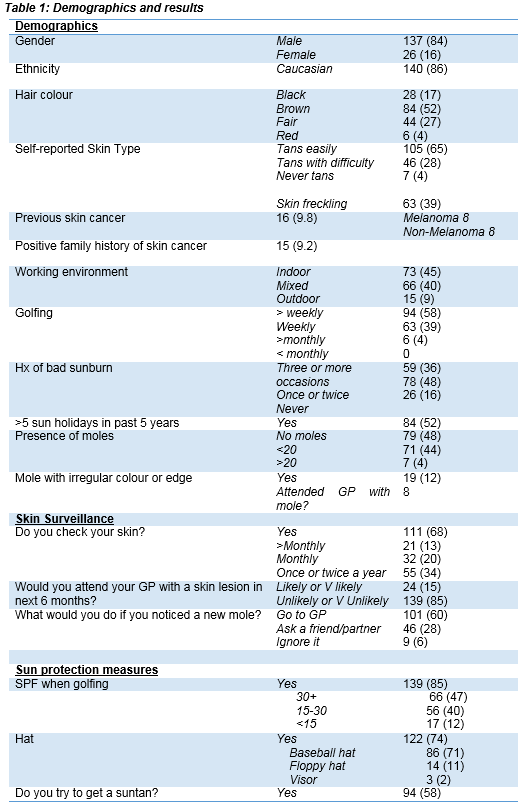 Discussion
We noted a high incidence of both non-melanoma and melanoma skin cancer in our subjects. The majority of respondents (74%) did wear a hat but the vast majority used a baseball hat where the UV protection is inadequate. A high percentage, 85%, of the golfers surveyed were compliant with SPF use. However many were using a lower SPF than the recommendations of the British Association of Dermatology and American Academy of Dermatology who suggest a sun protection factor of 30 or higher with broad spectrum protection. This may reflect the observation that the majority of respondents actively seek a UV related tan. Thus, the desire for a tan remains a barrier to optimal sunscreen use. We also observed, when distributing the questionnaires, that SPF was not available for sale at any of the pro shops surveyed. The promotion and availability of UV protection products in pro shops would potentially facilitate UV protection in this population.

Nevertheless, we were pleased to note the golfers assessed had knowledge of the risk factors associated with skin cancer. We felt that this may reflect the higher socio-economic grouping amongst the study participants. However, it may also reflect the numbers of those with a history of skin cancer amongst the group, or possibly the well-publicised skin cancers amongst high profile competitive golfers. Despite this knowledge and background, it is alarming that approximately one third of respondents would not seek medical advice in the setting of a new mole. A reluctance to seek medical advice remains a significant barrier to early intervention in this population. The limitations of the study include a gender bias due to the high proportion of males who responded. The questionnaires were kept short in an effort to optimise uptake. However, the number of individuals who declined to participate was not recorded and the potential for selection bias must be considered in association with recall bias as with any questionnaire based study. Finally, no respondents were examined or assessed with respect to the amount and frequency of application of SPF.

This preliminary survey suggests that golfers may benefit from targeted education emphasising the importance of higher SPF use. Other interventions that may benefit this population would include availability of sunscreens and educational literature in ‘pro’ shops at golf courses. A significant proportion of respondents would not seek a medical opinion in the setting of a new mole developing. Barriers to seeking medical input need further assessment. It is hoped that this preliminary survey will act as a reference against which the benefit of future UV awareness interventions can be evaluated.