There is an unmet need for new therapies in severe persistent asthma. Bronchial thermoplasty is a bronchoscopic procedure which employs radiofrequency energy to reduce airway smooth muscle and has been demonstrated to improve symptomatic control in severe persistent asthma in other populations. Seven patients have completed bronchial thermoplasty at a tertiary referral centre in Ireland. Asthma Control Test scores and data on hospitalisations, exacerbations, maintenance corticosteroid requirements, rescue bronchodilator use and peak expiratory flow rate (PEFR) were compared one year before and one year post treatment. Significant improvements were demonstrated in mean Asthma Control Test scores, from 8.9 to 14.7 (p = 0.036). Trends towards improvement were seen in mean hospitalisations (respective values for total in 12 month period 5.0, 0.9; p = 0.059) and PEFR (181.4 l/min, 280 l/min respectively; p = 0.059). These data support the use of bronchial thermoplasty in severe persistent asthma in the Irish population.

The prevalence of asthma in Ireland is the fourth highest in the world, affecting 7.1% of the adult population. The disease burden of the condition includes an average of 12 work days lost due to illness per patient per annum, A&E visits (14% of asthma patients per annum) and hospital admissions (8% of patients per year)1. Efforts to meet this public health challenge led to the launch of the National Asthma Programme in 2010. A key initiative of this programme was the formation of the Severe Asthma Group, a taskforce dedicated to difficult-to-control asthma and in particular high cost or novel interventions that this group of patients may require. Bronchial thermoplasty (BT) is one such emerging therapy indicated for those patients whose asthma remains poorly controlled on maximal standard therapy and who have not demonstrated a response to omalizumab when indicated. BT involves the deployment of localised radiofrequency energy to the airways via a bronchoscope, reducing airway smooth muscle mass and thus attenuating airway hyper-responsiveness. BT has been shown to improve quality of life, exacerbation rates and healthcare utilisation in patients with severe persistent asthma3 but has not been studied to date in an Irish population. In this observational study we describe the initial national experience of BT. We hypothesised that bronchial thermoplasty improved symptom control in an Irish population of patients with severe persistent asthma, as measured by the Asthma Control Test (ACT)4.

A retrospective observational study in 7 patients with severe asthma who had completed bronchial thermoplasty treatment in an Irish severe asthma referral centre.  The primary endpoint of the study was the difference in ACT scores from baseline to twelve months after undergoing BT. The ACT is a five-item questionnaire relating to asthma control, with each item scored from one to five, with greater score indicating better control to a maximum of 25.  Secondary endpoints included changes in hospital admissions, exacerbations, maintenance corticosteroid requirements, rescue bronchodilator use and peak expiratory flow rate and complications suffered. An exacerbation was defined as poorly controlled symptoms leading to increase in reliever usage, commencement of steroids or antibiotic therapy, emergency department visit or hospitalisation. Seven patients fulfilling the inclusion criteria were identified. Five were female. The patients' mean age in years was 55.6 with a standard deviation of 14. Six had never smoked; one was an ex-smoker. Their mean BMI was 29.7 (standard deviation 5.3). All seven patients remained poorly controlled despite treatment according to Step 4 of the Global Institute for Asthma guidelines. Five were 'steroid-dependent' and were maintained on an average of 16 mg of Prednislone daily. Two patients were Omalizumab responders and four had not responded. Mean follow-up in days was 402.3.

Clinical data relating to the patients’ asthma control during the twelve months prior to bronchial thermoplasty and the twelve months after completion of bronchial thermoplasty were collected by retrospective chart review and patient interview.  Initial assessment included review of asthma control indicators, compliance, pharmacotherapy regimens, allergy testing, education including avoidance of precipitants and inhaler technique and smoking cessation as necessary. Patients were instructed to maintain peak flow diaries for a period not less than three months so as to maximise compliance with prescribed medications including omalizumab and subcutaneous terbutaline pump where appropriate.  Patients whose control remained poor were offered referral for bronchial thermoplasty. The patients were pre-admitted to an elective admissions unit to ensure stability prior to the procedure. One patient required DDAVP infusion for co-morbid von Willebrand’s disease. Prophylactic high dose corticosteroids were commenced (with regimens tailored individually to the patient) and patients underwent spirometry on the day of the procedure. On the day of the procedure, patients were sedated according to standard diagnostic flexible bronchoscopy protocol. A standard flexible bronchoscope was inserted into the distal (4th or 5th generation airway) and the bronchial thermoplasty catheter AlairTM Catheter (Boston Scientific, Natick, MA, United States of America) introduced through the working channel of the bronchoscope.

The catheter was then deployed with all four prongs coming into contact to complete circuit for radiofrequency energy to be delivered (via the AlairTM Radiofrequency (RF) Controller, Boston Scientific) over approximately 10 seconds. The catheter was deployed sequentially at 1.5 cm increments from distal to proximal, to treat individual airway segments in a methodical, stepwise fashion. The procedure took place over 3 treatment sessions, treating the right lower lobe, the left lower lobe and both upper lobes respectively. It should be noted that the manufacturer advises against treatment of the right middle lobe due to the narrow diameter of the lobar bronchus and its acute take-off angle - characteristics which may promote atelectasis or difficulty in re-inflation (if transient obstruction occurs as a result of procedure-related inflammation or oedema). Patients were followed up at regular intervals and the following endpoints were formally measured at one year post procedure and compared to baseline pre-procedure values: ACT, dose of systemic corticosteroid, rescue bronchodilator (BD) usage, peak expiratory flow rate (PEFR), emergency department visit or hospital admission rate.  Statistical analysis undertaken using Minitab version 14 using the Wilcoxon Signed Rank Test. Differences were considered statistically significant at p < 0.05. 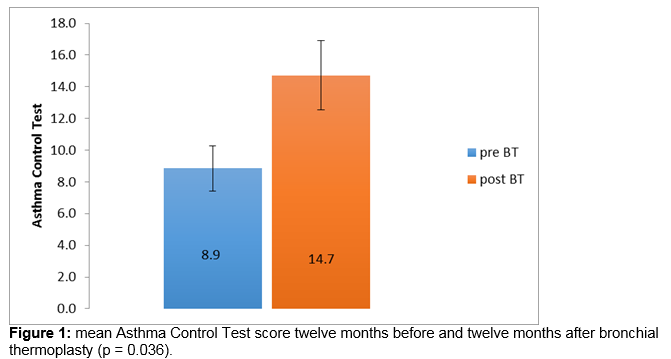 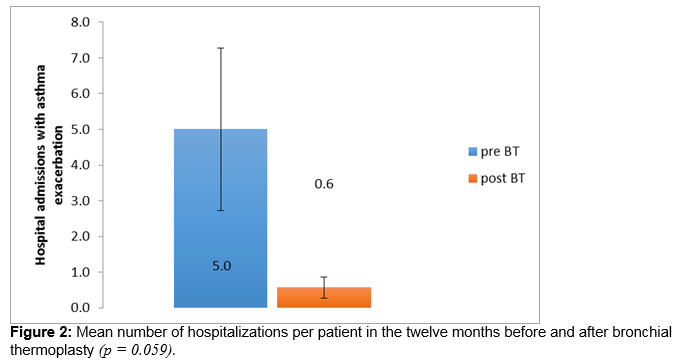 This is the first study looking at the effects of BT in a severe asthma population in an Irish population. The initial results are encouraging and both effectiveness and morbidity data are consistent with the international experience to date with this novel procedure. In this study we describe the careful selection of seven patients with severe asthma from our and other centres around the country. All patients were poorly controlled on treatment according to Step 4 of the Global Institute for Asthma guidelines and underwent a minimum of 3 months close clinical supervision with maintenance medications prior to procedure in order to ensure compliance with medications. Only when optimised did we proceed to thermoplasty3,5,6. At this point we electively admitted patients and pre-dosed each patient with high dose oral or IV corticosteroids for 24-48 hours. The patient was then transferred to the BT centre as a day case where the procedure was carried out after which the patient returned to the elective admissions unit for continuation of corticosteroid therapy and monitoring. The most common complication we observed was that of exacerbation of asthma requiring hospitalisation at a procedure frequency of 14%.  This is higher than the 8.4% reported by Castro et al3 and most likely reflects the severity of asthma in our patient population. Our population had a mean age of 55.6, some 15 years older than participants in the Air2 trial3 in which patients with a history of emphysema were excluded. Our study participants likewise did not have a diagnosis of COPD, and furthermore would not fit criteria for Asthma COPD overlap syndrome, although it is unclear what effect age may have on outcomes.

Our data show (at one year post BT) clinical and statistically significant improvements in asthma control and clinically significant improvements in PEFR and hospitalisation rate which trend towards statistical significance. Recently published data demonstrates that benefits were maintained in the original trial subjects 5 years post BT6. A significant placebo effect was seen in the sham controlled trial3 which was greater than that anticipated by the investigators7. It should be noted that recent joint ERS/ATS guidelines conclude that the evidence currently available in support of this procedure is ‘very low’, and strongly recommend that bronchial thermoplasty is performed only in the context of a systematic registry or clinical study, and in particular point to the need to identify the phenotype of patients who respond and to improve understanding of this new therapy and its long-term effects, as well as its effects in patients with more severe obstructive asthma (FEV1 < 60% predicted value)8. Controversy continues to surround9,10 the long-term safety of such a marked loss of airway smooth muscle, although promisingly the 5 year data recently reported6 found no clinically significant deterioration in lung function (FEV1) at 5 years and no structural changes in airways at 5 years on HRCT. The costs associated with this new therapy, at approximately €15,000 per patient are significant. NHS data assesses the mean cost of an emergency admission with asthma at above €1,20011. Patients in this group required admission on an average of four fewer occasions in the year after undergoing BT than in the year prior. This merits formal cost-effectiveness analysis. The success of the procedure relies on appropriate patient selection – the role of BT is to complement rather than to replace standard therapy, and patients in whom poor control is deemed likely to relate to poor adherence should not be selected for BT.

In summary, these data, although based on a small sample size, reflect a translation of randomised controlled study data into clinical practice, demonstrating significant improvements in symptom control after bronchial thermoplasty and support the use of this new therapy in appropriately identified asthmatic patients within the context of a systematic registry which will in time give a more precise estimate of its effects