The Epidemiology of Emergency In-Patient Hospitalisations Among Those with ‘No Fixed Abode’ (Homeless) 2005-2014: What Lessons Can Be Learnt.

Estimates show that homelessness is increasing in Ireland. This study analysed the epidemiology of emergency hospitalisations among those experiencing homelessness between 2005-2014. All in-patient admissions to acute hospitals classified with ‘no fixed abode’ were extracted from the Hospital In-patient Enquiry System. Data were analysed using JMP. There were 2,051 in-patient emergency admissions of people classified with ‘no fixed abode’ during the study period, an increase of 406% since 2005 (78 in 2005 vs. 395 in 2014). The mean age was 40.6 (S.D. 13.2). The majority of patients (1,176 /2,051; 57%) had a mental/ behavioural diagnosis. Over one in ten (280; 13.7%) were admitted for ambulatory care sensitive conditions (ACSCs) including convulsions/epilepsy (N=92/280; 32.9%), cellulitis (62/280; 22.1%) and COPD (29/280; 10.4%).  The health of homeless people is a fundamental issue that needs addressing. Access to, and use of, community and preventative services is needed to reduce utilisation of emergency hospital services.

All available evidence indicates that there has been a significant increase in the level of homelessness since 2010, but some forms of homelessness have increased more rapidly than others1. Homelessness is a complex phenomenon with many dimensions which are hard to capture in official figures. The Irish Government has adopted the ETHOS typology2 to capture the continuum of housing need from people with ‘inadequate accommodation’, through to people living temporarily in emergency hostels (‘houseless’) to people who are ‘roofless’ (which includes ‘night shelters’ and ‘sleeping rough’)3.

The reasons for homelessness are complex. Many people find themselves homeless as a result of unemployment, lack of affordable housing, income poverty, drug or alcohol abuse, domestic violence, mental health problems, and limited social supports4. Many homeless people experience difficulties maintaining good health due to poor access to primary care 5-6 and have worse health outcomes when compared to the general population. International studies have found that individuals who are homeless are more likely to be hospitalized7 particularly for ambulatory care sensitive conditions (ACSCs)8. ACSCs are a core set of 19 conditions for which it is possible to prevent acute exacerbations and reduce the need for hospital admission through active management in primary care setting, vaccinations, or lifestyle interventions9.

In Ireland, there is limited research on the impact of homelessness on emergency in-patient hospital admissions and there is no information on emergency hospitalisations due to ambulatory care sensitive conditions (ACSCs) among individuals with no fixed abode. This information would be useful in tailoring public health initiatives to reduce hospitalisations among the homeless population for preventable conditions.

The aim of this study is to analyse the epidemiology of emergency hospitalisations in Ireland for persons with ‘no fixed abode’ over a ten year study period (2005-2014 inclusive); to identify those with ambulatory care sensitive conditions (ACSCs) and to identify factors that may be associated with ACSCs with a view to reducing their need for emergency in-patient care.

All in-patient emergency admissions to acute hospitals in Ireland between 2005-2014 (for which area of residence was recorded as ‘no fixed abode’), were extracted from the Hospital In-Patient Enquiry (HIPE) system. HIPE is a computer-based health information system that collects data on discharges from acute public hospitals in Ireland10. The HIPE database contains information on the patient’s age, sex, area of residence, date of admission and discharge, together with their principal diagnosis and up to 20 other diagnoses, coded using the International Classification of Diseases Tenth Revision (ICD-10-AM)10. Discharges for homeless people were identified using the area of residence code of ‘no fixed abode’. The ambulatory care sensitive condition-related admissions were identified using ICD-10-AM categories. The data were analysed using JMP statistical package11. 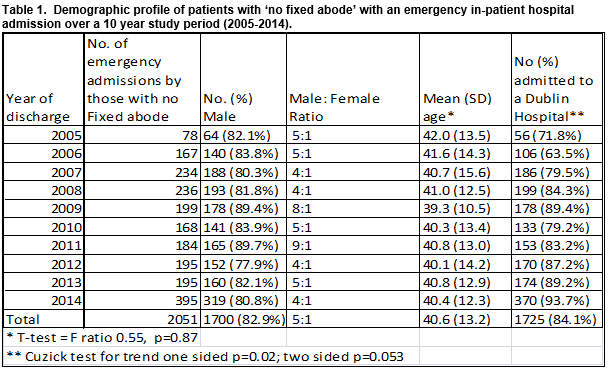 Demographic profile of patients with ‘no fixed abode’

Clinical and hospital characteristics of emergency in-patient hospital admissions for those patients with ‘no fixed abode’: 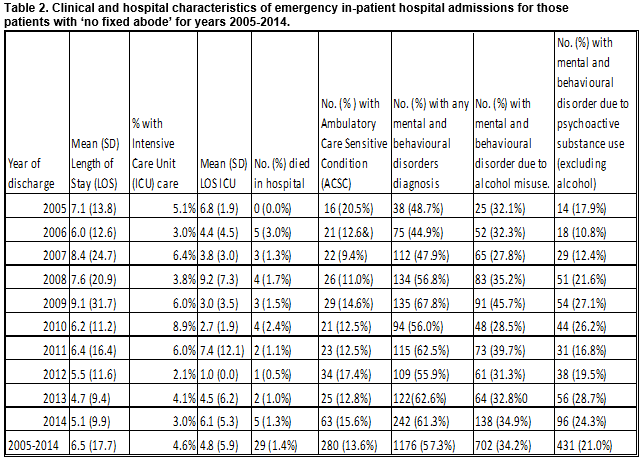 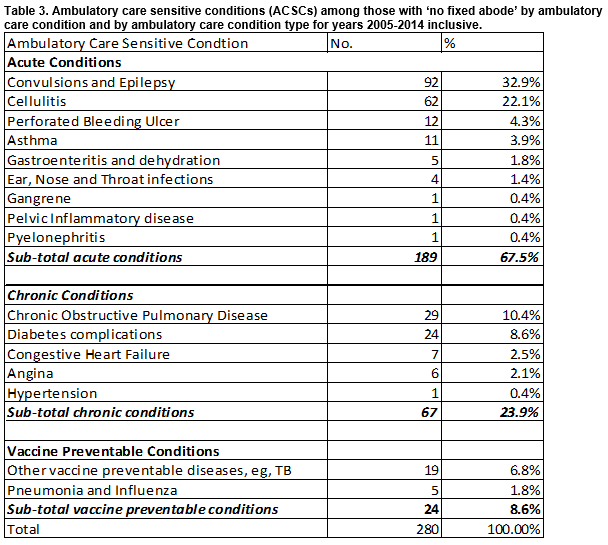 Logistic regression analysis was undertaken to determine the factors associated with persons within this cohort presenting with an ambulatory care sensitive condition. After adjusting for all variables in the model, the only factor that remained associated with being admitted with an ACSC was being older, whereby those over the age of 50 were one and half times more likely to be admitted with an ACSC (Odds Ratio, OR 1.48, 95% CI 1.12- 1.96, p<0.005) than younger persons who had no fixed abode.

This study provides a valuable insight into patterns of emergency admission among those with no fixed abode, and raises a number of fundamental issues in terms of meeting the health needs of homeless people. Since 2005, there has been an increase in Ireland’s population of 11.5%, and also an increase in the proportion of non-Irish born citizens of approximately 8%12. While population growth and changes in ethnic composition may contribute to more people being designated as homeless, it does not explain the significant 406% increase experienced in emergency admissions among homeless people. Furthermore, overall emergency admissions (excluding maternity and new born) have only increased by 13.1%13.

The increase in homeless emergency admissions is likely to be an underestimate as ‘no fixed abode’ was used to capture homeless populations. While there are some variations around the country, emergency accommodation is classified broadly into Supported Temporary Accommodation (STA) in which a person who is assessed as homeless will typically be provided with a bed, along with case management, for a six month period and Temporary Emergency Accommodation (TEA) where the person is accommodated on a ‘one night only’ basis and must reapply each day to the local authority for a bed. In Dublin at least, there is considerable movement of people between ‘rough sleeping’ and TEA accommodation. Thus it is likely that the ‘no fixed abode’ categorisation would capture only those who are accommodated in TEAs and those who are ‘roofless’ or rough-sleeping.

The increase in admissions for persons of no fixed abode show two significant ‘spikes’ – in the period 2005/2006 (114%), and again in 2013/14 (102%). While this recent increase does not correlate with any increase in recorded rough sleeping, it does reflect a period in which the number of people accommodated in TEA ‘one-night-only’ beds increased substantially12.

This increase in emergency in-patient admissions among this cohort of homeless (i.e. the roofless who are sleeping rough or in one-night-only shelters) is likely to be contributing to the overcrowding difficulties experienced by emergency departments. In addition, with an average length of stay of 6.5 days they are also placing demands on acute beds. Similar to other studies, 7 over one in ten of the admissions were for ambulatory care conditions, which may have been prevented with appropriate preventative and community based care. However, accessing non acute services may be difficult due to the transient nature of homelessness.

In examining gender patterns of emergency admissions, it can be seen that within the ‘no fixed abode’ group, men are five times more likely to be admitted than women. Although this reflects the larger proportion of men that are homeless compared to women, it is also likely that men are more likely to be ‘roofless’ while women are more likely to reside in ‘hidden homeless’ situations (friends, family etc.) and therefore are more likely to give an address. Because of the hidden nature of women’s homelessness13 caution is needed in interpreting the gender differences in the study.

Compared to emergency admissions generally the average age of the homeless patient is younger than the general population14. Although health issues may have contributed to homelessness (e.g. alcohol and drug misuse), this finding does suggest that being homeless itself has a significant impact on health. Indeed the average age of this cohort that died in hospital was 48.2 years, which is significantly lower than the current average life expectancy15.

With over half experiencing mental health disorders of which up to a third experience alcohol and substance misuse, it is clear that pathways to care need to be established as such health issues will have a significant impact on the cycle of homelessness if not addressed.

Homeless services have long identified the discharge of vulnerable people from hospitals as one of the key areas where prevention strategies should be focused16 but there has been less strategic focus on the overall interaction between hospital admission, primary health services and homelessness. Focus Ireland is currently in the second year of a Dublin Regional Homeless Executive funded pilot to prevent homelessness arising from hospital discharge. Currently referral to this service is through medial social workers. It would be important that this initiative reviews all those classified as ‘no fixed abode’ to ensure homeless people are not ‘slipping through the net’ on discharge.

Of course, the best solution to this problem involves ending the homelessness of the individuals involved. There is growing international evidence that providing housing and intensive support using the Housing First model has high success rates and has significant positive impact on patterns of accessing health services for people who are chronically homeless16. The Dublin Housing First project (run jointly by Focus Ireland and the Peter McVerry Trust) has provided long-term homes for 50 people with long histories of rough sleeping17. But this approach will not be able to assist everyone in the foreseeable future and there is clearly scope for substantial improvements in the interaction between homeless and health services18.

The study is based on HIPE data which demonstrates patterns of hospital activity. As such a limitation of the study is that it cannot investigate incidence or prevalence. The development of a unique patient identifier may facilitate the generation of incidence and prevalence rates from HIPE data. Despite this limitations, the increase in the number of emergency admissions provides valuable information that can be utilised to help meet the needs of homeless people.

Overall, the study suggests that the growing number of admissions of people who are homeless to acute hospitals represents both a serious problem and a real opportunity. The problems reside both in the poor health of the homeless population and the substantial cost to the health service in dealing with these problems in a hospital setting. The opportunities arise in the potential to reconfigure the relationship between homeless services and health services so that the transition between the two systems cease to be places where vulnerable people can become lost and instead become intersections where pathways to appropriate supports can be identified and made available.

(Erratum: "The Focus Ireland pilot project on hospital discharge and homelessness prevention delivered through the DRHE is in fact funded by HSE Social Inclusion")