Work-related respiratory disease is a significant risk in the farming community. We assessed respiratory symptoms using a validated work-related respiratory questionnaire in 126 dairy farmers (19-75 years; 91.3% male). The prevalence of cough symptoms was 34.4%. Thirty-seven farmers (29.4%) complained of upper airway symptoms while forty (31.7%) complained of eye problems. Cumulated symptoms scores did not indicate higher than normal rates of chronic lung disease. Only 10 farmers (7.9%) were taking medication for lung conditions. Only 7 (5.6%) were current smokers. The rate of respiratory symptoms did not relate to the herd size or the method of animal feeding used by the farmers. The incidence of respiratory symptoms remains high among Irish dairy farmers. While the exact reason for this is unknown it may be related to continuing work- related dust exposure.

Introduction
Work-related respiratory conditions such as asthma, chronic bronchitis, hypersensitivity pneumonitis and organic dust toxic syndrome have been described in dairy farmers1. Exposure to organic dust and its microbial constituents such as fungi, allergens and endotoxin have all been linked to the development or exacerbation of respiratory diseases or respiratory symptoms among farmers2-4. Recent research has shown that Irish dairy farmers can have high and variable levels of organic dust and endotoxin exposures, often in excess of recommended health based exposure limits5. In recent years there have been significant changes in work practices and processes in the farming community. Despite these improvements dairy farmers continue to experience a high rate of work-related respiratory morbidity6. Dairy farming practice in Ireland still differs from that in other countries where enclosed or semi enclosed animal houses are normal practice7. The aim of this study was to assess the prevalence of work-related respiratory symptoms in dairy farmers in Ireland related to work practices and feeding systems.

Method
We carried out a cross-sectional study of respiratory symptoms in 126 dairy farmers at farming events in Ireland. All participants received an information leaflet and signed a written consent. All farmers completed a self-administered MRC modified questionnaire which included questions related to symptoms of asthma, bronchitis, HP and UAS. The questionnaire included specific questions on work practice and associated symptoms, smoking habits, respiratory and medical history as well as herd size. The collected data was anonymised. The data was analysed and single entered using SPSS version 22. The data was analysed using descriptive statistics, Chi Square tests and Fishers Exact test. The study was approved by the NUI Galway Research Ethics Committee.

Results
Of the 126 farmers who participated only 11 (8.7%) were female. The mean age was 47.8 years (14.8 SD) and the majority of farmers had herds of between 50 and 100 cows. Mechanical feeding methods were used by 61% farmers. The majority of farmers worked full time (94%) with an average working week of 55.5 hours. Thirty-four percent of farmers complained of cough and of these 40% related the symptoms to work. Thirty-seven farmers reported significant upper airway symptoms of whom 63% related these to work. Forty farmers complained of eye symptoms of whom 58% related these to work (Table 1) 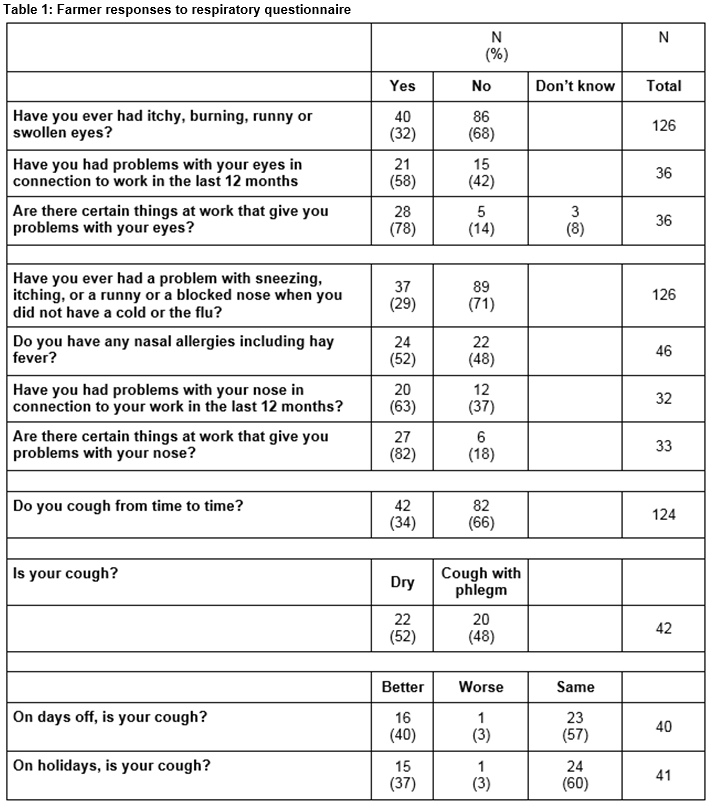 There was no relationship between respiratory or upper airway symptoms and age, duration of work or feeding method. Only 7 farmers were current smokers and 10 farmers were taking respiratory medication. The symptoms profiles of those with work-related symptoms did not significantly relate to any specific respiratory condition.

Discussion
In this study, we found a high prevalence of work-related respiratory and upper airways symptoms among dairy farmers. Although the prevalence of conditions such as hypersensitivity pneumonitis has declined in the farming population8 recent data indicate a significant prevalence of non-smoking related airways limitation in Irish farmers6. The prevalence of reported cough in this study is comparable to that reported previous studies of both Irish farmers (34%)6 and Irish agricultural workers (40%)9. The prevalence of current smoking in this group of dairy farmers was approximately six percent which is lower than the national average of 19.5 percent and much lower than that found in a previous study of agricultural workers (37%) who were noted to have a high prevalence of work related respiratory symptoms9. The profile of respiratory symptoms did not permit us to identify specific patterns that might relate to particular respiratory conditions. Recent studies from this group has shown that dairy farmers can be exposed to high and variable levels of inhalable dust and endotoxin5. The levels of dust exposure did not differ between automated or manual feeding methods. In this study no difference was noted in the symptom profile whichever feeding method was used. In French dairy farmers it has been suggested that dust exposure on dairy farms carries the same risk of developing COPD as cigarette smoking10. Similar to Cushen et al.6, we also found a high level of upper airways symptoms among dairy farmers. Previous studies have found a high level of nasal polyps and rhinitis as well increased inflammatory markers in famers in Germany11. Different inflammatory responses may occur in human nasal and bronchial epithelial cells on exposure to dust on a dairy farm. Despite improvements in work practice farmers continue to have significant work-related respiratory symptoms. Further studies are required to define the nature and significance of these symptoms.

Conflict of Interest
The authors declare that they have no conflicts of interest relating to this study and publication.

Acknowledgements:
The authors acknowledge that the study was funded by the MSc. Occupational Health and Safety programme at NUI Galway