There is evidence showing a tendency to upgrade COPD severity previously staged with spirometric-based GOLD (GOLD 1234) when using the new GOLD combined disease assessment (GOLD ABCD).1,2 The aim of our study was to compare the GOLD 1234 classification in a population of stable COPD patients with the GOLD ABCD classification to determine whether stable COPD was upgraded when using this new classification. After an observational study of a stable COPD cohort (n=112), 61 patients (54.5%) had an increase in their COPD severity when moving from the old GOLD 1234 classification to the current GOLD ABCD assessment (p<0.01). 42 patients (37.5%) had no change in severity of COPD. 9 patients COPD were assessed to be better on using GOLD ABCD. This study highlights previously missed high-risk patients when reviewing stable COPD. Continued incorporation of GOLD ABCD will translate into better evidence-based management.

In 1997, the Global Initiative for Chronic Obstructive Lung Disease (GOLD) was first launched in conjunction with the National Heart, Lung, and Blood Institute (subsidiary of National Institute of Health, USA) and WHO.3 The first guidelines for COPD management was released in 2001, where severity of COPD (Stage 0,1,2,3) was based on spirometric measurements of airflow obstruction, specifically the FEV1 or the forced expired volume in the first second of a forced exhaled maneuver.3 It included a Stage 0 i.e. At risk patients; who were respiratory patients who complained of chronic cough and sputum production but had normal spirometry. The rationale was that COPD progressed through a path of accelerated airway obstruction over time as measured by the FEV1. It has always been recognized however that there is disconnect between the single biomarker FEV1 and symptoms i.e. dyspnea; and exacerbation risk, however, the use of FEV1 was useful in the process of standardization of our understanding of COPD.3-5 This spirometric-based classification will be known as GOLD 1234 for this study. In 2011 GOLD revised the spirometric-based staging to include a combined assessment of the disease whose most recent update is 20146 (see Table 1).

This incorporated patients’ level of symptoms and future risk of exacerbations along with FEV1. COPD is now graded A, B, C, D. Two previously validated tools, the modified Medical Research Questionnaire (mMRC) and the COPD assessment test (CAT) were integrated to assess patient’s level of symptoms. The current/revised criteria will be henceforth being referred to as GOLD ABCD. The format of treatment is almost identical to GOLD 1234 with a stepwise increase in pharmacotherapy as patients’ grade of COPD worsens. There has been evidence showing a tendency to upgrade patients previously staged with older version of GOLD when using the new GOLD ABCD. The aim of our study was to compare the GOLD 1234 classification in a population of stable COPD patients with the novel GOLD ABCD classification to determine whether chronic COPD was upgraded when using this new classification. We reasoned that significant upgrading would more accurately reflect the burden of disease and better inform targeted interventions.

A cross-sectional observational study was carried out using patients with stable COPD attending a Dublin teaching hospital adult respiratory centre. Authors classified patients into GOLD 1234 and GOLD ABCD during the same review. Symptoms of breathlessness and history of acute exacerbations of COPD were recorded during the initial clinic consultation. Breathlessness resulting from COPD was graded using the modified Medical Research Council (mMRC) questionnaire. Exacerbations were defined as an increase in self-reported respiratory symptoms from baseline, deemed to require additional medication e.g. antibiotics or steroids. All patients’ FEV1 post bronchodilator and FEV1/FVC ratio was recorded. A ratio < 0.70 was required in all subjects to validate the presence of airflow obstruction. The new COPD 2014 classification was then used to group the patients into four groups; Group A (low risk with fewer symptoms), Group B (low risk with more symptoms), Group C (high risk with fewer symptoms) and Group D (high risk with more symptoms). Low or high risk was decided by a combined assessment of spirometry and history of exacerbations.

History of exacerbations was defined as a number of acute exacerbations in the 12 months preceding the study based on GP correspondence and clinical history. Fewer symptoms were defined as mMRC grade 0-1, with more symptoms defined as mMRC grade 2 or more. This was then correlated with the original COPD GOLD 1234 classification based on post-bronchodilator FEV1 alone. This was based on an assumption that COPD disease severity using GOLD 1234 should correlate directly to GOLD ABCD e.g. GOLD 1 = GOLD A, GOLD 2 = GOLD B, GOLD 3 = GOLD C, and GOLD 4 = GOLD D. A paired samples t-test (SPSS v22.) was conducted to evaluate the change in COPD grade between the GOLD 1234 and new GOLD ABCD classification if A=1, B=2 etc. 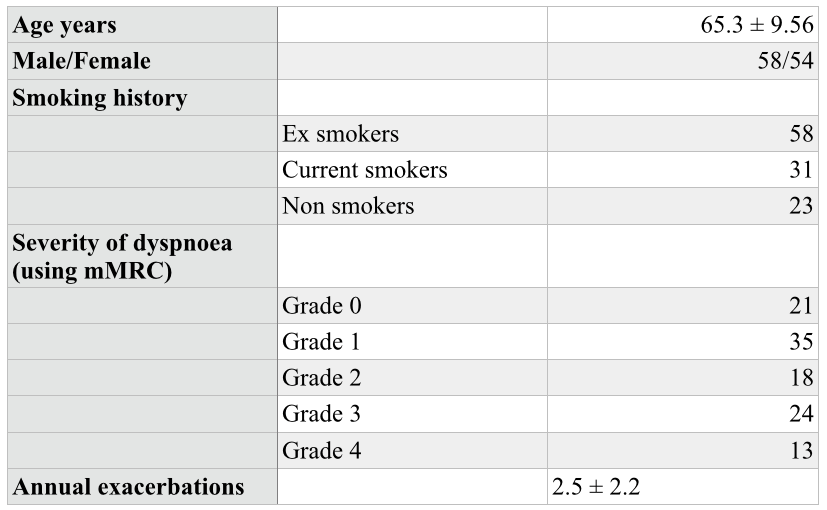 One hundred and twelve patients with stable COPD were recruited from an adult respiratory centre. Table 1 shows their baseline demographics and clinical characteristics. The average age of patients in this study was 65.3 years (58 males, 54 females). 23 patients (20.5%) in this study declared themselves lifelong non-smokers, which suggest that passive smoking or occupational exposure to tobacco smoke is still a burden in Irish healthcare. Figures 1 and Table 3 show the change in severity of stable COPD patients when moving from the old GOLD 1234 classification (spirometric based) to the new GOLD ABCD classification. 0 indicates no difference when using both GOLD classifications i.e. GOLD 0 = GOLD A or GOLD 3 = GOLD C. Forty two patients (37.5%) had no change in severity of COPD when comparing both the GOLD 1234 and GOLD ABCD guidelines. +1 indicates COPD severity increased by 1 GOLD category when using the new GOLD classification (e.g. GOLD 2 to GOLD C).

Figure 1: Difference in assessing the severity of stable COPD patients when moving from GOLD 1234 (spirometric based) to the new combined assessment i.e. GOLD ABCD classification 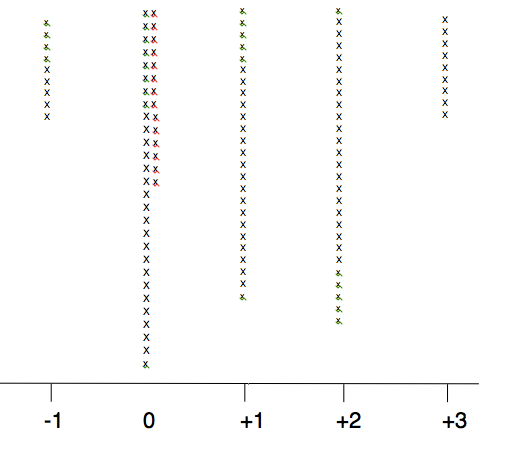 Table 3: Difference in assessing the severity of stable COPD patients when moving from GOLD 1234 (spirometric based) to the new combined assessment i.e. GOLD ABCD classification.

Our research has shown that in a stable COPD patient group, there was a significant increase in the disease severity when using the new GOLD ABCD guidelines as opposed to the GOLD 1234 guidelines. This is the first study of its nature in an Irish cohort. This study builds on evidence that the old spirometric-based guidelines in accessing COPD severity are a poor descriptor of disease severity. There is a non-linear relationship between decline in FEV1 and symptoms. Using the new GOLD ABCD guidelines a combined assessment of patient reported exacerbations and spirometric evaluation together with patient reported symptoms appears to be more representative of the burden of COPD in stable patients. Our findings in an Irish context are in line with a large multicentre study, which showed more patients were classified into more severe categories when using GOLD ABCD.1,2 A similar key finding noted an increase in Grade D disease in a COPD cohort (97 to 327 patients) when moving from GOLD 1234 to GOLD ABCD. These findings are important in motivating the change of practice to incorporation of GOLD ABCD when reviewing stable COPD patients. Earlier commencement of appropriate evidence based therapies will improve overall patient care. Better clinical governance of our daily practice is supported by studies like this, which highlight crucial deficiencies behind traditional clinical practices. Increased targeted therapies mainly pharmacotherapy will result in fewer exacerbations and improved health-related quality of life due to reduced symptoms. By demonstrating the actual burden of COPD on our stable patients, the failure to effectively manage severe COPD is evident. A majority of COPD patients are still very symptomatic and at a high risk of exacerbations despite being stable. This will add to the argument of phenotype focused research at GOLD C and D patients to further therapies beyond current anticholinergics, beta 2 agonists, theophylline and inhaled corticosteroids. One-size fits all approach clearly does not work for the multiple phenotypes of COPD e.g. frequent exacerbators or dyspnea with mild airflow obstruction.7 Current healthcare research is centered on effective pharmacotherapies being trialed and validated by objective improvements in symptoms and patient-reported exacerbations, as opposed to solely spirometric measurements. GOLD ABCD has also been shown to be a better predictor of future exacerbations.8

Our study’s strength is the application of evidence-based guidelines without strict inclusion criteria making it a real-life snapshot of a COPD cohort. Avoiding exclusion bias commonly seen in most randomized control studies allows these results to be easily duplicated in other respiratory and primary care centers. The current GOLD ABCD guidelines recommend either mMRC or CAT for assessing patient reported symptoms. The CAT is a comprehensive questionnaire that has more detailed questioning than the mMRC scale, and covers a wider spectrum of the symptoms that COPD can harbor. Unfortunately the CAT is also time-consuming and lengthy, hence the mMRC is more easily applicable for busy outpatients services. It has been shown that using different symptom questionnaires can significantly alter the demographics of patient groupings.9,10 This is logical when seeing that a difference in CAT of 10 or more is needed to differentiate between severity groupings as opposed to the simple 5-point ranking in mMRC. Still there is evidence that mMRC is better than CAT at predicting mortality. Neither questionnaire is as accurate as the St George’s Respiratory Questionnaire, which is the most validated questionnaire for assessing patient-reported symptoms in COPD.11,12 Furthermore numerous trials have also shown that despite the weakness of the GOLD 1234 classification, it was comparable or superior to GOLD ABCD in predicting mortality and decline in lung function.13-15 Hence we should still apply rational thinking and personalized decision making to each patient.

On an economical perspective, increased noting of severity in stable patients will lead to increased pharmacotherapy. In 2010, it was estimated $49.9 billion was spent on COPD in the US directly or indirectly. This figure is expected to rise in coming years.16 Earlier commencement of increased pharmacotherapy will also lead to an increase in the total cost accumulated over the life span of the patient, as there will be longer periods of treatment. Application of the new GOLD ABCD guidelines has significantly changed our assessment of COPD severity in a stable COPD population. Notably highlighting the previously under-recognized high-risk COPD patients, which was not highlighted when using the GOLD 1234 guidelines.