Failed surgical mitral valve repair using an annuloplasty ring has traditionally been treated with surgical valve replacement or repair1. For patients at high risk for repeat open heart surgery, placement of a trans-catheter aortic valve (i.e., TAVI valve) within the mitral ring (i.e., Mitral-Valve-in-Ring, MViR) has emerged as a novel alternative treatment strategy2-5 . We describe our experience of a failed mitral valve repair that was successfully treated with a TAVI valve delivered via the trans-septal approach, and summarise the data relating to this emerging treatment strategy.

Under general anaesthetic, the right common femoral vein (CFV) was accessed and an 8Fr sheath was placed. With transoesophageal echo (TOE) guidance, a high posterior trans-septal puncture was performed which facilitated delivery of a large curve Safari wire (Boston Scientific) into the left atrium. The inter-atrial septum was then dilated with a 12mm x 4cm Armada 35 balloon (Abbott Vascular) (Figure 1a-b). A Swan Ganz catheter with the balloon inflated was then delivered across the mitral valve allowing delivery of the large curve Safari guide into the left ventricle. Under rapid pacing of the right ventricle using a temporary pacemaker lead introduced from the left CFV, a 29mm Edwards Sapien XT TAVI valve was deployed within the mitral valve ring (Figure 1c-d). 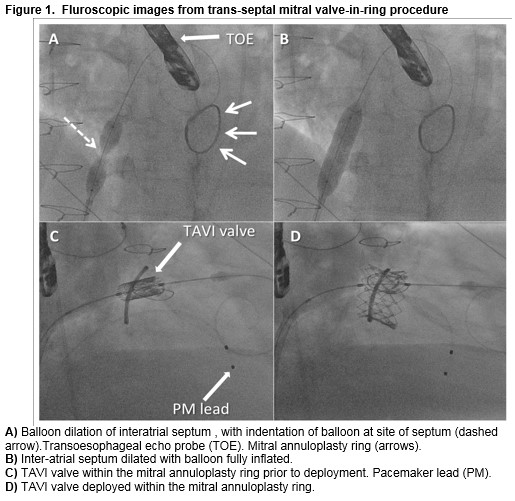 The patient made an excellent recovery and was discharged home on day two post-procedure. A TOE at three months showed a well seated TAVI valve within the mitral annuloplasty ring with a trivial jet of paravalvular MR (Figure 2a-d). 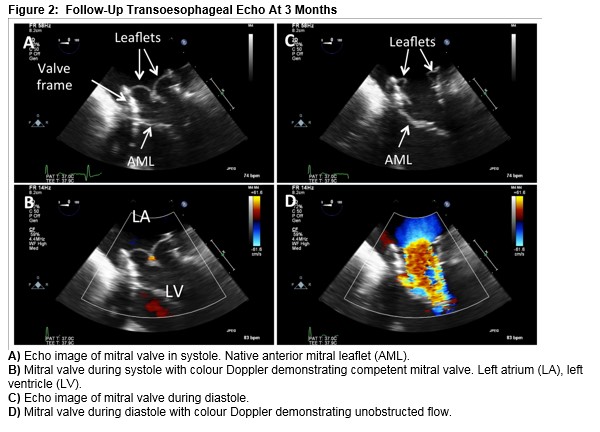 Discussion
This case highlights the effectiveness of the strategy of using a TAVI valve introduced via the trans-septal route to treat a failed mitral valve repair surgery that used an annuloplasty ring. To our knowledge this is the first time this procedure has been performed in Ireland. This MViR treatment option has only emerged in the last 4-5 years with the evolution of TAVI valve technology and clinical experience.

Our experience with this case and a similar case that used the alternate trans-apical approach was that the technique was remarkably straightforward and the procedures were very well tolerated. In the trans-apical case a mini-thoractomy performed at the site of the left ventricular apex allowed access for a delivery sheath [23Fr Ascendrasheath (Edwards Lifescience)] to be directed from the LV into the left atrium across the mitral valve ring over a super stiff Amplatz wire. A 29mm Edwards Sapien XT valve was then delivered through the 23Fr sheath.

Device delivery across the septum following balloon dilatation of the inter-atrial septum was uncomplicated and positioning of the valve across the mitral annuloplaty ring was only marginally more challenging with this approach compared to the trans-apical approach. We would certainly favour the trans-septal approach in the future, driven largely by the desire to eliminate the morbidity associated with trans-apical exposure.

Patients with a complete, semi-compliant mitral annuloplasty ring as was used in this case are likely the ideal candidates for this MViR strategy. The complete ring provides for greater device stability and the semi-compliant nature of the ring allows for circularisation of the ring folowing deployment of the valve, which minimizes the risk of paravalular leak.

The majority of the 65 published MViR cases have been treated using the Edwards Sapien family of balloon-expandable TAVI valves with delivery via the trans-apical approach. Among these 65 cases, complications included; left ventricular outflow tract obstruction (n=4, 6%), TAVI valve migration (n=2, 3%), and ring dehiscence (n=2, 3%). Five (8%) deaths within 30 days of the procedure were reported2,4-7. An international valve-in-valve registry reported a higher 30-day mortality (13%) for 88 patients undergoing MViR procedures8. This data highlights that MViR should be offered at specialised heart valve centres where multidisciplinary teams work together to try to maximize clinical outcomes in this complex patient group.