Guidelines exist for operation notes from the Royal College of Surgeons of England but compliance has been shown to be variable. The authors performed a closed loop audit of compliance with RCS standards in an Irish Plastic Surgery department. Thirty random operation notes were selected from a conserved pool of authors – before and after an educational intervention to increase awareness of the RCS guidelines. Following education, improvements were noted but also deteriorations – time increased from 12 (40%) to 16 (53%), emergency/elective status from none (0%) to 11 (36%), and operative diagnosis from seven (23%) to 21 (70%). However notably among the findings, surgeon’s name decreased from 30 (100%) to 26 (86%), findings from 27 (90%) to 21 (53%) and tissue altered from 27 (90%) to 20 (66%). As some specialities are developing operation note standards specific to individual procedures, the findings are compared with previous similar published work.

The importance of clear and complete operation notes cannot be disputed. A full and accurate operation note allows the seamless transfer of care from the operating room to the recovery area and beyond. Furthermore, as health systems across Europe embrace the European Working Time Directive, the need has never been greater for enhanced transfer of patient related information between medical practitioners – a greater implementation of shift work will mean that patients in the immediate post-operative phase will be cared for by doctors who were not directly involved in the surgical procedure. In addition, these notes are medico-legally important – should a court case arise from a patient’s episode of care, the operation note would form an important part of the legal documentation. Guidelines already exist for the preparation of operation notes. In 2008, the Royal College of Surgeons (RCS) in England updated their Good Surgical Practice (GSP) guidelines. As well as containing guidance and standards for good clinical care, teaching and training, relationships with colleagues and patients, and probity and health, this document laid out specific criteria to be included in operation notes – these are reproduced in Table 1. The GSP explicitly state that medical notes should “allow another doctor to assess the care of the patient at any time”1. It should go without saying that the operation note would be a key part of this assessment. There exists no comparably explicit document in Ireland. A Health Service Executive (HSE) document entitled “Standards and Recommended Practises for Healthcare Records Management” was published in 20112. This relates to the physical condition and maintenance of patient notes and there are specific recommendations about the time and date, the name and signature of the doctor making the entry and a bleep/identification (e.g. Irish Medical Council registration number) etc. The authors carried out an audit of their department’s practice relating to the writing of operation notes – specifically if the RCS guidelines are being upheld. This audit included an educational component to ascertain if any lack of adherence to the guidelines in our department was a result of ignorance or omission.

A retrospective review was carried out on thirty operation notes selected at random from the Department of Plastic Surgery in Galway University Hospital. Operation notes are handwritten into the patient’s medical notes following the procedure by a member of the surgical team. All operations were performed in the previous month. The notes were reviewed by the first author (KC) and their compliance with the 15 data points recommended in the RCS GSP guidelines was recorded. This was followed by an educational intervention – at a departmental meeting the results were presented and the GSP and HSE guidelines described. In addition to this, notices were placed in every location where our team regularly operate outlining the specific guidelines. Thereafter, a further review of 30 operation notes written in the calendar month following the intervention was performed. All notes were written by the same pool of authors who had contributed to the first selection. All authors attended the education presentation. 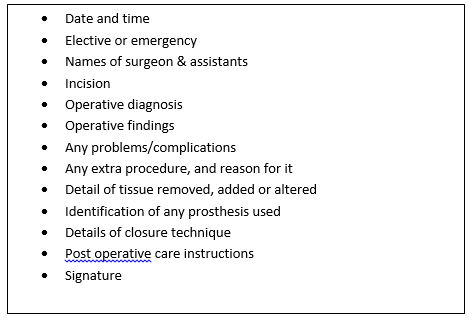 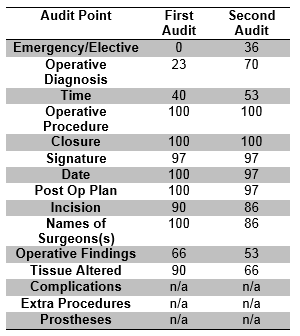 In both review periods the case mix and author grade were broadly similar – in the first there were 11 emergency procedures and 19 elective operations while in the second there were nine of the former and 21 of the latter. The breakdowns of authors were as follows; first survey: three consultant, 23 registrar/SpR (ST3+), two SHO (CT2+), and in the second survey; four consultant, 21 registrar/SpR, and five SHO. In the first survey there were a number of shortcomings identified. Following the presentation of these results to the author pool, the dissemination of the GSP standards and the placement of aide-mémoires in key areas, some small improvements were noted however other criteria showed little improvement. These findings are reproduced in Table 2. Of note, there was one note with no documented post-operative plan, and in both data sets there was one operation note that was not signed (3%).

While it should be borne in mind that these findings are based on a relatively small sample set, it is a robust one. The data is drawn from a conserved pool of authors, all of whom were exposed to the education intervention. However, there is a potential for a bias in the data, so the results were reconsidered on a “per author basis”. The authors considered that three of the standards were not relevant to the operation notes reviewed – namely complications, extra procedures, and prostheses. Omitting these, there remain 12 data points to be entered in each note. Taking that each separate author (12 in total) should enter these 12 points for each note written, we can generate a percentage compliance for each author. This is reproduced in Figure 1. As can be seen, only one of the 12 reached 100% compliance with the rest falling between 65% and 87%. There may however be a way to track operation note author compliance with the aim of improving operation note standards. If the four worst “performing” points in the first survey (time, emergency/elective, operative diagnosis, findings) are taken in isolation for the purposes of ascertaining author compliance in the second survey then a further graph can be generated to determine author concordance with the aim of promoting adherence with the GSP guidelines. This is reproduced in Figure 2.

It can be seen that author “A” had the lowest compliance, and on review of the operation notes it was seen that this author had written six of the 30 notes randomly selected for review in the second survey. While this could be viewed as a confounder for the data, it also raised the interesting point that we cannot expect compliance with guidelines as a given, regardless of the relative importance of each point. We must educate our peers and juniors about the importance of robust documentation, and hope that they do not later gain this appreciation through a negative experience of the consequences of poor documentation. 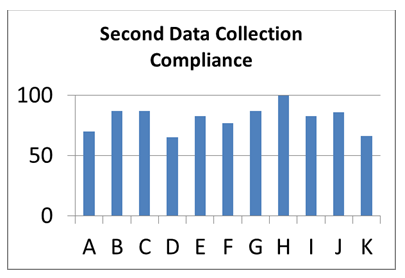 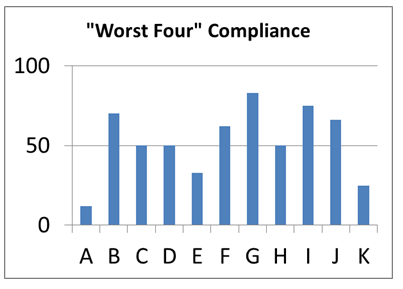 There have been a number of publications looking at the implementation of the RCS GSP guidelines into surgical practice3-6. These have shown that the compliance across a number of specialities is variable. This may in part reflect that the guidelines are not directly applicable to these specialities. Indeed, in plastic surgery, a sizeable proportion of procedures would have as their primary aim the “alteration of tissue” and therefore it may seem moot to the authors to include a specific reference to this. This point can be equally applicable to cases involving the excision of skin and soft tissue lesions – when this information is implicit in the procedure, many surgeons will not include it separately in the documentation. Previous published work in this area bears this out – Rogers et al performed an audit of over 280 operation notes before and after an educational intervention similar to that set out here7. In their cohort of “post education” operation notes, 19.2% of the operative surgeons felt that the diagnosis did not need to be included as a separate heading in the documentation, and 56.9% felt the same for tissue altered/added. Almost all of the surgeons in this group marked the “prosthesis” sub-heading as not applicable and we would agree that this is often the case and excluded it for analysis in our group. This variety in criteria needing to be recorded in our operation notes presents a challenge for a pan-speciality, pan-procedure checklist.

The British Orthopaedic Association have a specific operation note for primary hip arthroplasty8, and the Dutch Association of Hepatic Surgeons have a checklist for documenting the required steps in laparoscopic cholecystectomy9. With this in mind, is it possible to have a unified standard for operation notes, given the near infinite variation in surgical procedures that are performed across the specialities? Many of the previously published works in this area emphasise the importance of education in achieving compliance with operation note standards. However, we have shown here that merely didactically raising awareness of a standard may not automatically lead to its acceptance. This may reflect the non-applicability of the blanket standard as outlined above, the pragmatism and individuality of surgeons as a group, or simply a resistance to external pressure to change. It is difficult to relate patient outcomes directly to the quality of operation notes. However the National Confidential Enquiry into Peri-Operative Mortality (NCEPOD) in the United Kingdom did highlight a “considerable variation in operation notes, and….. an urgent need to improve medical notes”6. One method that may prove fruitful is the development of electronic operation notes. These involve two formats. The first is a word processor document available on a computer in theatre that is populated with “drop-down” boxes. These require the input of data points as the note is commenced, with a free text box for any additional or specific information at the author’s discretion. The resultant note can be printed, signed and filed in the medical notes. Such a format was trialled by Ghani et al in a recent published audit – they were able to markedly improve the content of operative records with the introduction of a macro enabled word processor document that was author generated10.

However, the wide range of operative procedures in each surgical sub-speciality perform may hinder implementation – it may require such a large number of options in the “drop-down” menu as to be unworkable. Instead, perhaps surgeons could write an “ideal” operation note for a number of their most commonly performed elective procedures and then tailor it to the operation at hand. The other alternative is an electronic theatre management system, which is a part of the patient’s pathway through theatre. It requires the completion of an electronic note, again with a number of required fields. This could generate an operation note that is printed, signed and filed. The downside of these two options is the requirement for a functioning computer and printer, with the attendant costs of purchase and maintenance. Perhaps, as health systems evolve and move to a paperless state, the entirely electronic patient record will become a reality and compliance with a range of medical note keeping will be automatic.