Abstract
Foot drop is a complex symptom with a considerable range in aetiology, severity and prognosis. We aim to characterise the aetiologies of foot drop and assess the diagnostic contribution of neurophysiologic testing (NCS/EMG). Retrospective review of consecutive referrals of foot drop to the Neurophysiology Department in Cork University Hospital was performed over a two year period (January 2012 to December 2013). Of a total of 59 referrals, common peroneal nerve (CPN) palsy comprised only slightly more than half of cases; 3(5%) have central origin; 3(5%) have motor neuron disease. Six (10%) have diabetes; 7(12%) have cancer; 5(8%) were bilateral. NCS/EMG altered initial working diagnosis in 14 out of 52 (27%) cases whereby initial diagnosis was provided. However one-third of all cases revealed additional coexistent pathology in an anatomic location remote to that of the primary diagnosis. Foot drop with central and proximal localisations are important and under recognised. NCS/EMG is valuable and also reveals additional pathology which warrants investigation.

Introduction
Foot drop is a simple term describing a complex symptom with a wide variety of aetiologies of which the clinical consequences may have a considerable range in severity, urgency and prognosis. It is a common and distressing problem which may lead to falls and injuries. Taking into consideration the anatomic localisation of the pathology in question, foot drop may be due to a lesion in the brain, spinal cord, anterior horn cell, lumbosacral nerve roots or plexus, sciatic nerve, common peroneal nerve, or part of a generalised polyneuropathy or myopathy. We aim to characterise the aetiologies of foot drop and assess the diagnostic contribution of neurophysiologic investigations in the assessment of foot drop.

Results
Of a total of 59 foot drop referrals, there was a wide age range (14 – 88 years) with 44% of cases above 60 years, another 44% between 31 and 60 years and 12% aged 30 years or less. Males comprised 58% of cases. The majority (81%) of foot drop referrals had NCS/EMG performed as an outpatient. Nevertheless, about a quarter of all cases were reviewed within a week, 37% within a month and 71% within 3 months. The Neurology Service referred the highest proportion of foot drop cases (n=24, 41%), followed by the Medical Team (n=11, 19%), Orthopedic Service (n=10, 17%), General Surgery Team (n=4, 7%) and Neurosurgery Team (n=2, 3%), among others. One referral was sent directly from a general practitioner (GP).  Just over one-third of cases were referred externally from hospitals other than CUH. Table 1 demonstrates the aetiology of foot drop by anatomic localisation and corresponding causative mechanisms. Common peroneal nerve (CPN) palsy comprised only slightly more than half (55%) of cases of foot drop in our study. The leading causative mechanism was precipitous weight loss (9/33, 27%) whereby the aetiology of weight loss itself was not documented on the referral form in more than half of cases. Nevertheless, causes of weight loss known at time of referral include post-gallbladder surgery, oesophageal diverticulum requiring parenteral feeding, psychotic depression and chronic lymphocytic leukaemia. Direct injury and trauma comprised 18% of cases of CPN palsy. The majority (5 out of 6) had accidental or sporting traumatic knee injuries; meanwhile, one patient was post-femoropopliteal bypass surgery. 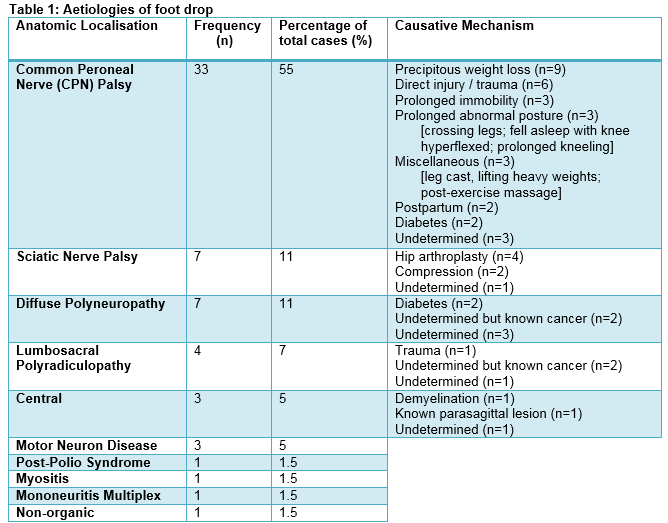 The remaining causes of CPN palsy in order of frequency are as follows: prolonged immobility (n=3) whereby all 3 patients were in the postoperative period; prolonged abnormal posture (n=3, crossing legs; fell asleep with knee hyperflexed, prolonged kneeling); miscellaneous (n=3, leg cast, lifting heavy weights, post-exercise massage); postpartum (n=2, one post-vaginal delivery, one post-emergency caesarean section) and finally compression neurapraxia with underlying diabetes (n=2). In 3 cases of CPN palsy, the causative mechanism was undetermined.  Both sciatic nerve palsy and diffuse polyneuropathy were the next most common causes of foot drop (each n=7, 11%), followed by lumbosacral polyradiculopathy (n=4, 7%). Hip arthroplasty was the causative mechanism in 57% of sciatic neuropathy cases in our cohort. Only two cases of diffuse polyneuropathy have diabetes, and only one case of lumbosacral polyradiculopathy was trauma-related. A central aetiology was identified in 5% of cases of which one had suspected demyelination, one with known parasagittal meningioma and one with cause undetermined. Motor neuron disease (MND) also comprised 5% of cases. Other more uncommon causes of foot drop in our study cohort include post-polio syndrome, myositis, mononeuritis multiplex and non-organic aetiology. In addition, 8% presented with bilateral foot drop of which each case had a different causative mechanism and none were central; these are demonstrated in Table 2. 10% of all cases have diabetes; 12% have known history of cancer.

NCS/EMG altered initial working diagnosis in 27% (n=14) of cases. Table 3 demonstrates cases of discordance between initial working diagnosis provided by the referring team and eventual combined neurophysiologic and clinical diagnosis provided by the consultant neurophysiologist. Notably, two cases with central aetiology and one case of MND were mistaken for CPN palsy, and one case of myositis was mistaken for diffuse polyneuropathy. Furthermore, no initial working diagnosis was provided on the referral form in 12% of cases. Although initial clinical diagnosis did not change in the majority of cases (n=45, 73%), 11/45 (24%) cases revealed additional coexistent pathology at a remote anatomical location to that of the primary diagnosis, which may or may not contribute to the development of foot drop. In fact, one-third (n=18, 31%) of all foot drop referrals have multiple (two or more) concomitant pathologies. The most common such combinations include lumbosacral polyradiculopathy and diffuse polyneuropathy (n=6) as well as CPN palsy and diffuse polyneuropathy (n=5). Table 4 demonstrates concomitant pathologies revealed by NCS/EMG. Hence, further investigations in the form of neuroimaging, formal neurology review, blood and cerebrospinal fluid testing, as well as repeat NCS/EMG may be warranted. Recommendations for further investigation were explicitly stated in the final NCS/EMG report in 46% of cases. 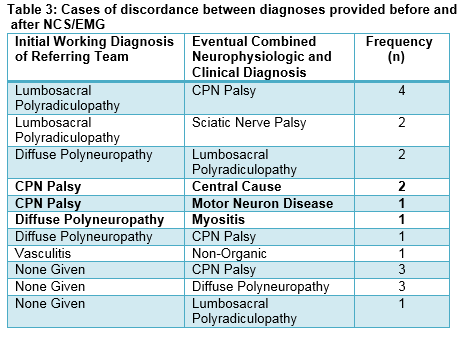 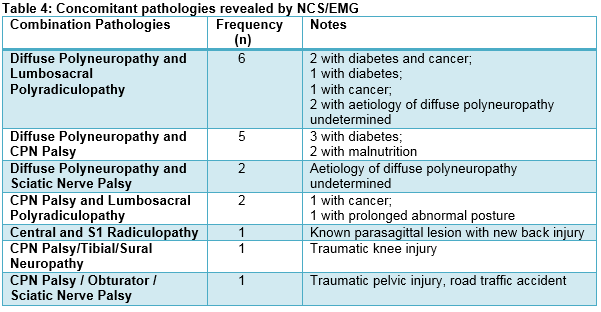 Discussion
There is a paucity of studies in the literature which characterise the aetiology of foot drop cases referred to a neurophysiology centre. Our record of 59 consecutive referrals over two years is likely an underestimate of the true incidence of this symptom. Clinically mild and rapidly resolving foot drop e.g. secondary to habitual leg-crossing or external compression may remain unreported; similarly, an obvious uncomplicated cause e.g. acute stroke may not warrant referral for NCS/EMG. Precipitous weight loss was identified as the leading causative mechanism of CPN palsy. However, in 56% of such cases, the aetiology of weight loss, whether intentional, or unintentional and potentially sinister, was not documented on the referral form. It should be emphasised that it is primarily the responsibility of the referring team to ensure that the aetiology of weight loss is always investigated. Furthermore, prevention of foot drop in such cases is possible1. In an inpatient setting, this may involve early identification of patients with predisposing factors e.g. immobility, prolonged abnormal postures, malnutrition, known malignancy, perioperative period etc. and prompt active management of these factors by attentive medical and nursing staff e.g. with frequent re-positioning, nutritional supplementation and environmental padding. A total of 10% of referrals either had central aetiology or MND. Central pathology is under-appreciated and warrants consideration because timely recognition of correctable central causes of foot drop leads to good outcome2. Interestingly, in a separate retrospective study of foot drop comprising 217 patients, a central origin was identified in 31% of cases3. Furthermore, early focal involvement of one or more limbs is a typical clinical manifestation of MND4.

Bilateral foot drop comprised 8% of our cases. It should be acknowledged that diffuse polyneuropathy or myopathy may be mistaken for bilateral peroneal neuropathies because dorsiflexion weakness may be more obvious than plantarflexion weakness5. Furthermore, alternative diagnoses to CPN palsy may be missed if muscles not supplied by the CPN are not properly assessed. Hence, careful neurological examination of the patient with foot drop is paramount. That being said, the sizable proportion (27%) of cases of discordance between diagnosis of the referring team and that of the neurophysiology team may be explained by the following reasons: inadequate physical examination by the non-neurologist; difficulty grasping the intricate neurological anatomy of the lower limb; or the referral of unusual or indeterminate cases. Total hip arthroplasty (THA) formed the majority (57%) of our cases of sciatic neuropathy. The incidence of iatrogenic nerve damage in THA was identified as 1.5% in one study investigating 2,255 cases, whereby the most common nerve injured is the femoral nerve (59%), followed by the sciatic nerve (26%) and superior gluteal nerve (15%)6. In another study examining the clinical features of 73 patients with sciatic neuropathy, the most common aetiology was hip arthroplasty in 22% of cases7. The overall prevalence of lumbosacral radiculopathy is approximately 3-5%8. Most lumbosacral radiculopathies are caused by intervertebral disc disease or degenerative changes of the spine, and less commonly by compressive lesions e.g. tumours and cysts, or infections e.g. varicella zoster virus9. Out of 4 cases of lumbosacral polyradiculopathy in our cohort comprising 7% of referrals, one was trauma-related, two had possible cancer-related involvement and one was of undetermined cause. Furthermore, it was proposed that electrodiagnostic testing for radiculopathy is usually highly specific but not very sensitive9. Reasons for this include subtotal root involvement, myotomal overlap and reinnervation after denervation.

In our study, 29% (2/7) of cases of diffuse polyneuropathy were diabetes-related. However, the aetiology of the majority (5/7, 71%) of cases remained undetermined, although 2 out of 5 such cases may be cancer-related. These patients warrant further investigation including screening for both common and uncommon contributing factors e.g. alcoholism, vitamin B12 deficiency, autoimmune diseases and infections. Furthermore, 10% of our cases are diabetic. It is known that patients with diabetic neuropathy are rendered more susceptible to nerve damage via compression and ischaemia5. The pathophysiology involves hyperglycaemia-induced cell injury and oxidative stress10. Up to 50% of diabetic patients will certainly develop neuropathy during their disease11. It is imperative that patients with a history of cancer and presenting with foot drop or any neuropathy should be meticulously assessed. Cancer-related causes of foot drop to consider include direct tumour or metastatic invasion of lumbosacral nerve roots or plexus, chemotherapy or radiation-induced nerve damage, paraneoplastic phenomena as well as the effects of weight loss, anorexia and nutritional deficiencies. A recent systematic review and meta-analysis reported that the prevalence of chemotherapy-induced peripheral neuropathy is 30% at 6 months after chemotherapy12. One limitation of this study is that the causative mechanism of foot drop was undetermined in 22% (13/59) of all referrals despite having established anatomic localisation with NCS/EMG. Explanations include inadequate documentation of clinical history and findings on the referral form; the requirement by the referring team to perform further investigations for completion of work-up whereby diagnosis is unclear; and finally, clinical prognosis at weeks to months post-NCS/EMG was not studied. Recommendations for future work include investigating the concordance between neurophysiologic and neuroimaging findings, or the correlation between neurophysiologic measurement values and the causation, clinical severity and prognosis of foot drop.

In conclusion, foot drop with central and proximal localisations are important and under-recognised aetiologies. Bilateral foot drop requires careful assessment to not miss a diffuse polyneuropathy or myopathy. Neurophysiologic testing is valuable in the assessment of foot drop, even in situations whereby no change in diagnosis is made, as concomitant pathology at a remote anatomic location is not uncommonly revealed and warrants further investigation.