B Ramasubbu, A Donnelly, A Moughty

Abstract
A retrospective review of the demographics, co-morbidities and substance misuse of the 20 most frequent presenters to the Mater Misericordiae University Hospital emergency department during 2014 was carried out in an attempt to better understand the epidemiology of their presentations. Eighty-five percent were male and 15% female (p<0.001). The average age was 40.6 years with a median 38.5 years. All were unemployed and 7 (35%) had no fixed abode. Thirteen patients (65%) lived an average of 4.5 kilometres from the ED. In this study the presence of a mental illness, homelessness, alcohol or drug misuse were associated with significantly higher attendance rates (p=0.001, p<0.001, p<0.05, p<0.001 respectively). Early identification of these patients and targeting them for effective case-based community-led treatment strategies could improve their quality of life, decrease their cost of care and ultimately lead to more effective utilisation of our already overburdened emergency departments.

Introduction
Overcrowding in our emergency departments (ED) and appropriate utilisation of the emergency department facilities are topics of much interest in the Irish healthcare system. Within the literature on ED usage, there is only a small focus on frequent attenders. It is known however, that a small number of patients are responsible for a disproportionate amount of ED visits with up to 4% of patients accounting for 18% of total ED visits in one particular study1. This small but distinctive group of patients repeatedly seeking ED care often have psychosocial, substance misuse and/or chronic illness issues which play a factor in their repeat attendances2. Early identification of these patients and targeting them for effective community based-care treatment strategies could improve their quality of life, decrease their cost of care and ultimately lead to more effective utilisation of our already overburdened emergency departments. Our patient population at the Mater Misericordiae University Hospital contains a number of frequent attenders. We sought to review the demographics, co-morbidities and substance misuse of our most frequent presenters in an attempt to determine the epidemiology of their very frequent presentations.

Methods
A review of the demographics, substance use and co-morbidities of the twenty most frequent presenters to the emergency department of the Mater Misericordiae University Hospital Dublin in 2014 was performed. Data was recorded on Microsoft Excel. Chi Square was used to assess relationships between patient demographics, substance misuse, mental health and number of re-attendances.

Demographics
Eighty-five percent were male and 15% female (p<0.001). The average age was 40.6 years with a median 38.5 years. All were unemployed and general medical scheme (GMS) card holders (Entitled to a range of Health Services free of charge due to social setting)3. Seven (35%) had no fixed abode. Thirteen patients (65%) lived an average of 4.5 kilometres from the ED. Five of this thirteen had recently been homeless and were living in temporary hostel accommodation. Nineteen of the twenty most frequent presenters were single or separated from partners (95%). Table 1 summarises the demographics. 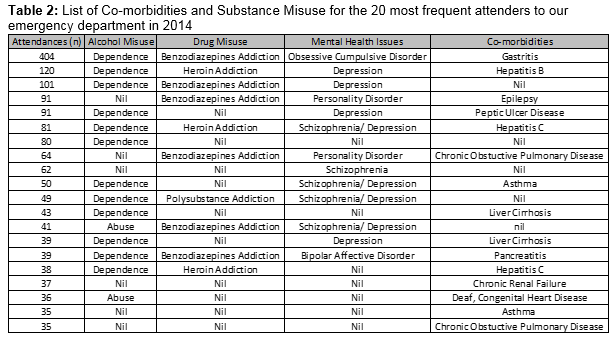 Outcomes
Eighty-five percent admitted to smoking (17/20), they had a significantly higher average attendance rate than non-smokers (84 v 36)(P<0.001). Psychiatric conditions predominated with 65% having a previous mental health issue (13/20). One patient (5%) had Bipolar affective disorder, 1(5%) had obsessive compulsive disorder and 1 (5%) had schizophrenia. Two (10%) had personality disorders, four (20%) had depression and 4 (20%) had co-existent depression and schizophrenia. The average number of attendances for those without a mental illness was 43.4 compared to 94.8 in those that did. The presence of a mental illness was associated with a significantly higher attendance rate (P=0.001). Only 30% (6/20) denied misuse of alcohol with the majority being alcohol dependent (60%, 12/20) or admitting to alcohol abuse (10%, 2/20). The average number of attendances for those misusing alcohol was 87 compared to 54 in those who did not. Misuse of alcohol was associated with significantly higher attendance rates (p<0.05). Half of the patients had no drug related issues, with 15% having an opiate (heroin) addiction (3/20), 30% had a benzodiazepine addiction and 5% had a polydrug addiction. Of those who misused drugs, their average attendance rate for 2014 was twice that of who did not misuse drugs (103 vs 51). Misuse of drugs was associated with significantly higher rates of attendance (p<0.001). Table 2 summarises the co-morbidities and substance misuse for the 20 most frequent presenters to the Mater emergency Department in 2014.

Discussion
In keeping with previous studies on re-attenders this study found that there were significantly more men in the top twenty re-attenders to our hospital4. In Dublin itself, there have been mixed reports with some studies concurring that males predominate2, whereas others have shown no significant difference in the gender of frequent presenters5. Similarly, in comparison to other studies with regard to age, both an increased frequency of attendance with increasing age and weighting towards young adults have been demonstrated2,5. In our institution however, we found an average and median age of 40.6 and 38.5 respectively showing middle age to predominate. This may be in keeping with differing demographics of the catchment areas. Connolly Hospital in Blanchardstown, another Dublin hospital had a very young catchment area and is situated in the Dublin west electoral constituency whereas our institution falls into the Dublin Central electoral constituency where its proportion of 25-49 year olds was over 7% greater than the Irish national average6,7. It has been shown within Ireland that those who are unemployed or hold a GMS card are significantly more likely to be frequent attendees8. This was also highlighted by our results which showed all the twenty most frequent presenters to our institution were unemployed and holding GMS cards. It is impossible to tell from these or other results the cause or effect relationship of unemployment and frequent ED attendance and whether unemployment and more free time causes patients to represent more frequently or the act of representing has led to the impossibility of maintaining continuous employment. This area should have further study as it could be a target area for government organisations combating re-attendance. There was a negative correlation, though not statistically significant, between distance of a patients residence from the ED and number of attendances in the 12 month period (p=-0.09). This is in keeping with previous work in this area which found that there was a significant relationship between proximity of a patients dwelling to the ED and number of attendances in a given year2. Five out of the nine most frequent attendees had no fixed abode and so could not be included in the calculation. It is possible that if they had, it may have extenuated the results and become significant as many of these patients were staying in emergency accommodation local to the hospital or sleeping rough on the streets nearby.

Other studies noted that the majority of re-attenders reside within a 5 mile radius of the ED which is true for our data set9. Looking at the 12 homeless (including temporary hostel accommodation) and comparing them to those living at home we can see that homeless patients attended an average of 95 times in one year whereas non-homeless attended an average of 49 times. Thus, homelessness was significantly associated with an increase in frequency of attendances (p<0.001) in this study in keeping with international data10. Anecdotally, it would be interesting to see if placement in a hostel or permanent accommodation reduces re-attendance to emergency departments. Case series on these patients might help build a case for increased investment in accommodation and other social interventions in an effort to reduce ED attendances and the increased waiting times that accompany it. Nineteen of the twenty most frequent presenters to our institution were either single or separated. This may be due to the fact that the population of our catchment area are much less likely to be married than the national population (30.1% vs. 48.8) and an incidental finding, or that being single is a risk factor for frequent attendance7. Previous work in the area shows that being married was inversely associated with frequency of attendances2.

Either way, this is a non-modifiable variable however, its importance must be appreciated. Eighty percent (16/20) of the most frequent attendees misused either drugs or alcohol. Of the remaining four each had a chronic disease which accounted for the majority of their presentations including asthma, chronic obstructive pulmonary disease, paranoid schizophrenia and end-stage renal disease. Despite these conditions, those with drug or alcohol misuse problems collectively had a significantly higher average attendance rate than those without (85 vs 42)(p<0.05). This highlights the fact that in our catchment area, drug and alcohol misuse impacts our emergency department to a greater extent than chronic disease. A study in the UK showed that concurrent alcohol use or history of alcohol dependence and illicit drug use was reported in 54.6 and 15.9% of frequent presenters9. In our institution, looking at the twenty most frequent presenters we found alcohol and drug misuse reported in 70 and 50% respectively. This highlights the great burden of alcohol and drugs on Irish society and our department in particular from frequent attenders. A study on behalf of the Irish health care executive highlighted the enormous cost of alcohol to the Irish healthcare system. In 2007 alone, an estimated €1,200 million was spent on alcohol related illnesses. This was only a third of the overall cost to Irish society of problem alcohol use11. Additionally in a hospital setting, between 2000 and 2004 an estimated 10% of all hospital bed-days occupied were as a result of alcohol related illnesses and 6.2% of hospital admissions were due to alcohol related problems12,13. In this study 14/20 (70%) had alcohol related issues (excess or dependence) and accounted for a total of 1214 attendances in one year by only 14 patients. This again shows the burden of alcohol misuse on the emergency services in Ireland and that resources must be put in place to assist in rehabilitation and relieve pressure on emergency services.

Previous articles have shown anecdotal evidence that many regular attenders have combinations of mental health, substance misuse and social care issues14. This is again clearly highlighted in this article where 50% (10/20) had drug related issues. This sentiment is mirrored for those with mental health issues. The presence of a mental illness was associated with a significantly higher attendance rate (P=0.001) in this article. It is proposed that insufficient community-based mental health services may contribute to the reasons why people represent to the ED15.  Again, it highlights the need for the political will to affect change to alleviate this burden on acute care. It must be appreciated that the results of this article are only for a very small sub-group of re attenders. Thus, their results are difficult to generalise for all re-attenders. The data was collected from only one centre in Ireland so its results cannot be accepted as representative for other institutions inside or outside of Ireland. It does however, give an understanding of the high level of substance misuse, mental health issues and social poverty that very frequent attenders suffer. The College of Emergency Medicine best practice guidelines suggest that patients identified as ‘very high frequency attenders’ (e.g. 30 or more attendances per year) should have a multidisciplinary meeting and case management including input from social and primary care16. Ultimately, our very frequent attenders are a complex group of individuals who need a holistic approach to management. For many of our very frequent attenders this would involve addressing underlying causes such as drug and alcohol misuse, poorly managed mental health issues and social deprivation. Significant investment is required to improve services both inside and outside the hospital to relive the pressure felt from re-attenders in the emergency department. Additionally, more studies must be carried out on a local, national and international level to identify and manage causes of very frequent attendance.

5. B Ramasubbu, B Lee, N Collins. ‘Re-Attenders to the Emergency Department of a Major Urban Hospital Serving a Population of 290,000.’ Irish Medical Journal. January 2015 Volume 108 Number 1.
Constituency Profile: Dublin West, Oireachtas Library and Research Service, based on data from Census 2006.