Abstract
Transient hyperphosphatasaemia of infancy (THI) is a benign condition characterised by a rapid rise and fall in plasma alkaline phosphatase (ALP) activity without biochemical or clinical evidence of underlying bone or liver disease. It is most often identified incidentally during routine blood testing; hence it is important to recognise this phenomenon in order to avoid unnecessary investigations and inappropriate referrals. This review has provided some useful insight into the characteristics associated with the THI and the routine clinical practice when isolated elevation of plasma ALP is found in patients at two sites in Republic of Ireland. Over a period of two years, 107,468 requests for plasma ALP analysis were received, of which a total of 250 patients were identified with a plasma ALP activity above 1000IU/L. The biochemical diagnosis of THI was considered in 62 patients, 15 (25%) of these were inappropriately investigated and 5 (13%) were unnecessarily referred to tertiary care by their general practitioners. We recommend that if an isolated high plasma ALP activity is detected during routine blood testing without any indication of bone or liver disease, it is important to consider THI in the differential diagnosis and to repeat the plasma ALP in 7-10 days. This should be further confirmed by the normalisation of the plasma ALP activity in 2-3 months or by ALP isoenzyme analysis where deemed appropriate by the laboratory.

Introduction
Transient hyperphosphatasaemia of infancy (THI) is a benign condition characterised by the rapid rise and fall in plasma alkaline phosphatase (ALP) activity without biochemical or clinical evidence of underlying bone or liver disease. In THI, plasma ALP activity usually increased to more than four to five times the upper limit of the age related reference range but elevations up to 20 times the age appropriate reference limit have been described in the literature1-2. The condition is confirmed by the normalisation of the enzyme activity in plasma within approximately 2-3 months and the presence of a characteristic pattern of alkaline phosphatase isoenzyme on electrophoresis. The pathogenesis of THI is not well explained in the literature but one hypothesis is that this condition is caused by increased sialylation of ALP resulting in delayed clearance from the circulation with the half-life of ALP ranging from 5-25 days3. Most infants or children with THI are younger than five years of age; however, a few cases presenting in adults have been reported4-8. It is usually observed in healthy children; there is no consistent clinical correlation. It has been reported in association with a variety of clinical conditions including viral infections involving the respiratory and gastro-intestinal tract9-11, post liver and kidney transplant12,13 and in children receiving chemotherapy for haematological malignancies3,14. THI is most often identified incidentally during ‘routine’ blood analysis and therefore it is important to recognise this phenomenon to avoid unnecessary extensive investigations and inappropriate referrals.

A retrospective review of laboratory data in two paediatric tertiary care hospitals was undertaken to estimate the number of potential cases of THI that were identified over a two year period and to describe the characteristics associated with THI encountered an Irish cohort.

Methods
For the purpose of this review, THI was defined as an isolated raised plasma ALP activity above 1000IU/L in the presence of a normal biochemical bone profile and LFTs, no identifiable condition associated with a raised ALP activity and evidence that the plasma ALP rose abruptly and returned to normal within the expected half-life of ALP isoenzyme associated with the THI (Figure 1). Using the available IT resources at the two sites, all plasma ALP results >1000IU/L and the associated biochemistry results over a period of two years (January 2013 - December 2014) were collated and reviewed to determine the age of presentation, sex distribution, seasonal fluctuation and how these infants and children were investigated and monitored. Exclusion criteria included those individuals admitted in an intensive care unit, attending the Oncology, Haematology, Gastroenterology and Endocrinology services where there was an obvious cause of a raised plasma ALP activity and where there were no associated bone and liver biochemical profile available. Patients attending both primary and tertiary care with normal associated biochemistry results were included. 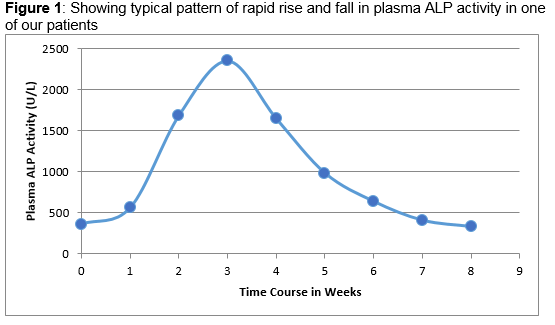 Results
Over the two year period, 107,468 requests for plasma ALP analysis were received between the two sites, of which a total of 250 patients were identified with a plasma ALP activity greater than 1000IU/L. Ninety-eight patients were omitted based on the exclusion criteria described above. Of the remaining 152 patients, laboratory comment to suggest “Transient hyperphosphatasaemia and repeat bloods in 1-2 weeks” was attached to 56 (37%) patient laboratory reports. Repeat plasma ALP analyses were performed on 98 patients (64%); however, only 38 (25%) patients had these repeat blood tests carried out within the period of 1-2 weeks. Amongst those who showed decreasing plasma ALP activities on repeat analysis, the biochemical diagnosis of THI was considered in 62 patients, 59 patients (95%) of who were ≤5 years with male to female ratio of 3:2 (Table 1). The diagnosis was based on the sharp rise and fall in plasma ALP activity with a calculated median half-life of 7.5 days (range 5.1 to 15.5 days), normal bone and liver biochemical profiles and subsequent normal plasma ALP activity at 2-3 months. The documented median peak plasma ALP activity in patients with probable THI was six fold (range: three to twenty-three fold) of the upper limit of age appropriate reference range. Failure to recognise the possibility of THI led to the referral of 5 (13%) patients to a paediatric endocrinologist or general paediatrician. Additional biochemical investigations were performed on 15 (25%) patients. These included determination of serum 25-OH vitamin D and parathyroid hormone (PTH), all of which were reported as normal (Table 1). ALP isoenzyme analysis was carried out on 4 patients and confirmed the characteristic pattern consistent with THI in three. The patient who had a negative ALP isoenzyme result on electrophoresis had a normal plasma ALP activity when the blood was taken for isoenzyme analysis.

C-reactive protein was measured in 28 patients at the time of initial blood sampling. Seven patients (25%) showed mild to moderate elevation possibly indicating infection or an ongoing inflammatory process. Three THI cases were identified in patients post-renal transplant on immunosuppressant therapy who had stable renal function and normal associated biochemical results. However, it was not possible to comment further on the association of THI in remainder of the cases as this is beyond the scope of this review. Furthermore, no seasonal clustering was observed. 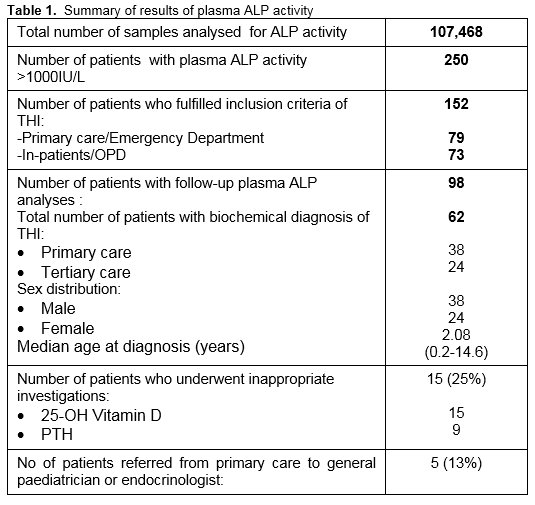 Discussion
Overall this retrospective review has provided some useful insight into the characteristics associated with THI and the routine clinical practice when isolated elevation of ALP is found in patients at two sites in Ireland. The data showed that THI is a relatively common condition, presenting in infancy and during childhood and is almost equally prevalent in both primary and tertiary care settings. Although markedly increased plasma ALP levels may occur in THI, only moderately elevated plasma ALP activities were observed depending on the timing of blood sample in relation to the developing or resolving natural course of the transient elevation of plasma ALP. Therefore, very high plasma ALP levels are not necessary to reach the diagnosis. The diagnosis of probable THI was considered in 62 patients over the two year period, the majority of which were under the age of five year with slight male preponderance; however, there was no significant seasonal variability. It is important to note that 15 (25%) of these patients with a classical biochemical and clinical presentation had inappropriate follow-up investigations performed and 5 (13%) were unnecessarily referred to tertiary care by their general practitioners. ALP isoenzyme analysis is not required to make the diagnosis in the majority of cases and should be reserved only to those cases where the diagnosis remains unclear, following consultation with the laboratory staff.  We recommend that if an isolated high plasma ALP is detected on routine bloods without any indication of underlying bone or liver disease it is important to consider THI in differential diagnosis and to repeat plasma ALP levels in 7-10 days. Based on a median half-life of 7.5 days, the expected plasma ALP activity can be calculated. It should be confirmed by demonstrating a normal plasma ALP activity at 2-3 months. We also identified an inconsistent practice to attach a comment to a biochemistry report that would prompt clinicians to consider THI when an isolated raised plasma ALP is found on a biochemical analysis. Measures to improve the effectiveness of this service are under way by re-training of the laboratory staff.

In summary THI is relatively common biochemical abnormality. It is important to rule out this condition when an elevated plasma ALP activity is found in the absence of biochemical and clinical evidence of bone or liver disease. Unnecessary investigations and referrals can be avoided by demonstrating a decreasing plasma ALP activity on repeat analysis in 7-10 days, in accordance with the expected plasma half-life of approximately 7.5 days. This should be further confirmed by the normal plasma ALP activity at 2-3 months or by ALP isoenzyme analysis where deemed necessary by the laboratory.

9. Goto M. [Is respiratory syncytial virus one of the causative agents for transient hyperphosphatasemia?]. Rinsho Byori 2002; 50:1146.