The Practice of Vitamin D Deficiency Assessment in a Geriatric Day Hospital.

Abstract
There has been no clear consensus on the assessment and treatment of vitamin D deficiency prior to the publication of the National Osteoporosis Society (NOS) Vitamin D Guideline in 2014. The aim of our study was to assess the practice in a medicine for the older person day hospital setting relative to this guideline. A 6-month retrospective analysis of all new patients who attended service from January to July 2013 was carried out. Seventy-six patients were included in the final analysis. Mean age was 83 years. 39 (51%) patients had sufficient levels while 37 (49%) patients had insufficient levels; 14 (19%) being inadequate and 23 (30%) deficient. Eighteen patients who had insufficient levels were subsequently prescribed supplements; 13 (72%) received vitamin D3 in combination with calcium while 5 (28%) received vitamin D3 alone. Based on the findings of this study, we have made some recommendations and adopted the guideline.

Introduction
Vitamin D is important for maintenance of bone health. It promotes calcium absorption from the bowel, enables mineralisation of newly formed osteoid tissue in bone and plays an important role in muscle function1. Vitamin D deficiency will result in osteomalacia in adults and rickets in children. Previous studies have shown that vitamin D deficiency is common2-3, particularly in older people4. This is due to poor nutritional status, increased frailty and decreased exposure to sunlight in this age group. Its prevalence is variable ranging from 28% to 100% of healthy adults and 70% to 100% of hospitalized adults in Europe5. There has been an increased awareness that vitamin D deficiency may contribute to the development of metabolic bone disease, osteomalacia, osteoporosis, muscle weakness and result in increased rates of falls and fractures6-7. There is emerging evidence of the potential benefit of vitamin D supplementation in cognitive dysfunction8. The National Osteoporosis Society (NOS) published a practical clinical guideline on the management of vitamin D deficiency in adult patients with, or at risk of developing, bone disease6. Based on this guideline, the serum 25 (OH) vitamin D (25OHD) thresholds adopted for the study define <30nmol/l as deficient; 30–50nmol/l as inadequate in patients with osteoporosis, fragility fractures, malabsorption or on steroids and > 50nmol/l as sufficient. The aims of the study were to audit the practice of vitamin D level measurement for the new patients attending a medicine for the older person day hospital, to assess if deficiencies were noted and corrected according to the NOS guidelines and to assess if calcium level was checked a month after vitamin D replacement.

Methods
This was a 6-month retrospective study. All new patients aged ≥ 65 years attending St Mary’s Day Hospital for comprehensive geriatric assessment from January to June 2013 were included. Data was collected from hospital charts and blood results from the central biochemistry laboratory at Mater Misericordiae University Hospital, Dublin. This was subsequently entered into Microsoft Excel and analysed. Only patients who had vitamin D levels measured at initial review were included for analysis. Clinical biochemistry investigations for the subsequent 12 months were reviewed to identify if repeat vitamin D levels and serum calcium levels were obtained. The assay method used for vitamin D assessment was liquid chromatography-tandem mass spectrometry (LC-MS/MS) which is the gold standard methodology9. Results were expressed as mean (95% CI). Statistical tests used include t– test for continuous variables, Chi-square for categorical variables and one-way analysis of variance (ANOVA) to compare between the three pre-defined groups. For the purpose of this analysis, significance level was set at P<0.05. 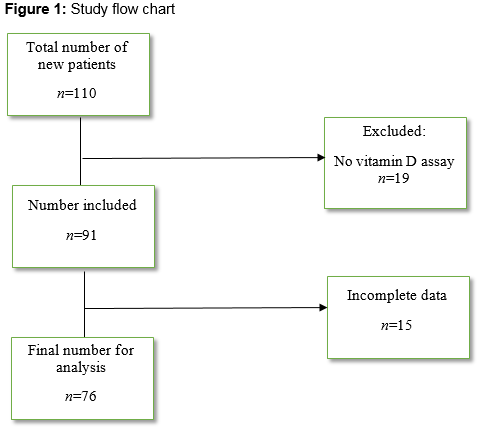 Discussion
Our study showed suboptimal adherence to assessing vitamin D levels in new patients attending the day hospital. As vitamin D deficiency prevalence is high amongst the frail older adults, all the new patients who attended our day hospital for comprehensive geriatric assessment should have blood tests inclusive of serum vitamin D levels. Ninety-one (75.2%) patients had vitamin D measured. Of those that were in the final analysis, 14 (18.4%) had inadequate levels and 23 (30.3%) were deficient despite 5 (35.7%) and 1 (4.3%) respectively having being placed on vitamin D replacement. In those who had low vitamin D, there was suboptimal level of vitamin D replacement. We also found a high level of inappropriate retesting of vitamin D in the 12 months following initial assessment. Not all new patients had vitamin D assays done either by omission or presumed normality. Most of the patients seen in the clinic will either have bone disease or be at risk. The guideline recommends vitamin D measurement for same. Of the patients that were included, approximately half had deficient (30.3%) or insufficient (18.4%) serum concentrations of vitamin D though this was not adjusted for seasonality. This also calls into question the extent of patients’ compliance to prescribed medications, poor absorption of the oral supplementation and lack of awareness amongst patients to take adequate vitamin D in their diet. Similar figures were reported in 2005 by Hirani2 and in 2006 by Hill10 and McCarthy11. This shows that over time, the prevalence of hypovitaminosis D has largely remained the same. Even though the deficiencies were noted in patients’ medical notes, 40% of these patients were not prescribed vitamin D. Reasons for this include the fact that some patients were discharged back to their General Practitioner (GP), referred to another facility, never returned for further follow up, went in to nursing homes for long-term care or just an oversight. This shows a lack of systematic review and hence, there is room for improvement in patient follow-up which may involve alerting health care personnel to deficiencies as soon as the results are obtained, and taking immediate action for its replacement which may involve correspondence to GP. Of the rest (60%) who received vitamin D replacement, all were prescribed oral vitamin D3 and none received loading doses. Based on the guideline, this can be done where correction of vitamin D deficiency is less urgent as it would be in most of our patients. Currently underway are novel high dose oral vitamin D preparations; use of these agents may lead to easier dosing.

None of the patients who received vitamin D replacement had adjusted serum calcium checked at one month after starting therapy. This is in contrast with the guideline’s recommendation aiming at assessing the possibility of unmasking a primary hyperparathyroidism6. Reasons for this would include the timed follow up for these patients which would mostly be in 3 months or more. The GP may be able to perform the serum calcium level. A report by Wagner et al. has shown that replacing vitamin D in mild primary hyperparathyroidism is safe and effective and does not increase calcium to dangerous levels12. Perhaps, routine serum calcium monitoring following commencement of vitamin D may not be necessary. Inappropriate retesting of vitamin D does have financial implications. The NOS guideline recommends that routine testing of vitamin D may be unnecessary in patients with osteoporosis or fragility fracture or those who may be co-prescribed vitamin D supplementation with an oral anti-resorptive treatment. Unnecessary retesting of vitamin D leads to increased laboratory expenditure. Implementation of this guideline is likely to have cost saving implications for the hospital. Hospitals need to work in conjunction with the laboratory and/or information technology service to draw up policies regarding vitamin D retesting in patients known to their service. From our study, we showed that vitamin D assessment was performed in about 83% of the new patients who attended the day hospital. We found significant hypovitaminosis D amongst the attendees which was consistent with other studies.

There were limitations to this study in that our sample size was small and serum vitamin D levels were not adjusted for body mass index (BMI) and seasonality. The impact of BMI status2,13 and seasonal variations2 on vitamin D concentrations in elderly patients has been previously reported.

Based on the findings of this study, we recommend that all new patients in a geriatric assessment unit should have vitamin D levels checked and action taken based on the result. This should be done in conjunction with the laboratory. Only patients with previously low vitamin D level and started on replacement should get repeat assessment as well as serum corrected calcium. This will reduce the number of unnecessary tests carried out. Health professionals dealing with bone health should familiarise themselves with the NOS vitamin D guideline.