Abstract
The prevalence of Mycobacterium avium complex (MAC) pulmonary disease is increasing globally. However, reliable national and international data relating to its epidemiology and management is lacking. During the period 2003-2014, MAC was isolated from the pulmonary samples of 75 patients at the Irish Mycobacteria Reference Laboratory (IMRL). Most patients (42, 56%) had underlying pulmonary disease, and 37 (49%) had clinical/radiographic characteristics consistent with MAC pulmonary disease. However, only 18 patients (24%) fulfilled internationally accepted criteria for diagnosis/treatment of this disease. Treatment was started in 13 (72%) of these cases, which is similar to internationally published treatment rates. The diagnosis of significant MAC pulmonary disease can be difficult, and treatment is not always warranted even when diagnostic criteria are met.

Introduction
Nontuberculous mycobacteria (NTM) are environmental organisms found in soil and water that are potential pulmonary pathogens in susceptible individuals. Published data suggest that Mycobacterium avium complex (MAC) is the most common cause of NTM pulmonary disease1,2. MAC encompasses several species of NTM including M. avium and M. intracellulare. The number of MAC isolates appears to be increasing internationally3,4. However, as NTM/MAC disease is non-notifiable in most countries (including Ireland), reliable estimates of its epidemiology and management are lacking. Furthermore, identification of MAC in pulmonary clinical samples frequently poses a significant diagnostic dilemma as it may represent contamination, colonisation or infection3. According to American Thoracic Society (ATS) guidelines, patients are classified as having NTM/MAC pulmonary disease if they meet specific microbiological, clinical and radiological criteria3. Despite this guideline document, it is likely that considerable variability (drug treatment versus no drug treatment) exists amongst clinicians in their management of MAC pulmonary disease2. The aim of this study was therefore to evaluate patient characteristics and management (according to ATS guidelines) of MAC pulmonary infection in an Irish hospital population.

Results
During the study period, 28,500 pulmonary samples (12,958 patients) were analysed for TB. There were 99 MAC isolates (75 patients) cultured from these samples (no cystic fibrosis cases, 52% male). Median age at time of culture positivity was 64 years and 52% of patients were current/former smokers. Most patients (56%) had underlying pulmonary disease (COPD (33%), bronchiectasis (25%)), and 30% of patients were immunosuppressed (21% HIV positive). Radiological and microbiological data are presented in Table 1. M. avium (79%) was the most commonly cultured organism (M. intracellulare 21%). Only 18 patients (24%) fulfilled ATS criteria for treatment of NTM. Treatment was commenced in 13 patients, and patients who received no treatment were clinically stable during follow-up. Reasons for not treating diagnosed patients included patient preference, clinical/radiological improvement over time and deranged liver function. Most patients (77%) were treated with the recommended regimen of clarithromycin, rifampicin and ethambutol. 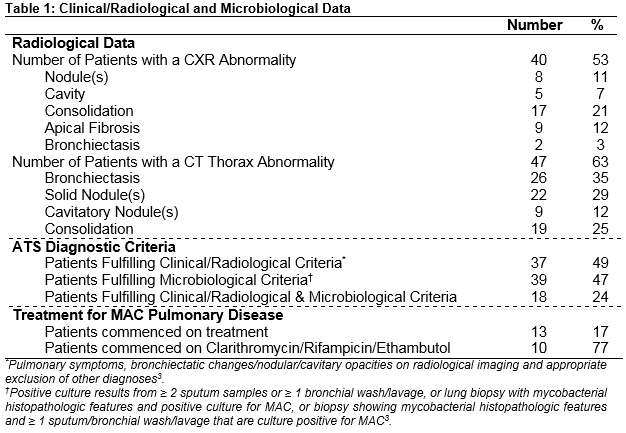 Discussion
This study has shown that MAC is not commonly isolated from respiratory samples in an Irish hospital population. In addition, the majority of culture positive patients do not meet internationally-accepted criteria for NTM pulmonary disease, and treatment is only considered following fulfilment of these criteria and then physician/patient consensus. Two previous Irish studies suggest that MAC is the most common pulmonary NTM pathogen with an increasing prevalence in those with underlying pulmonary disease5,6. In contrast to previous studies, this study details how microbiological criteria for MAC disease treatment are not usually fulfilled following isolation from sputum/bronchoalveolar lavage. In addition, clinical/radiological criteria may not be fulfilled even when microbiological criteria are met. Therefore, a diagnosis of treatable MAC pulmonary disease was ultimately made in only a minority (24%) of MAC isolate patients, which is similar to internationally published figures7.

A recent pan-European study suggests that there is significant heterogeneity in NTM pulmonary disease treatment practices according to specific country and severity of symptoms2. In this study, we have shown that treatment for MAC pulmonary disease is only started in an Irish hospital cohort when internationally accepted clinical/radiological and microbiological criteria for this disease are fulfilled. In addition, treatment was only started in 13 (72%) of suitable cases and non-treated patients remained clinically stable during follow-up. This therefore illustrates how it is often reasonable not to start treatment in selected patients. This figure also compares with reported treatment rates of 43-68% in Europe, USA and Asia8-10. We consequently believe that patients with NTM pulmonary disease are preferably managed by physicians with suitable expertise in centres where they can be enrolled in prospective epidemiological/clinical trials in order to enhance our understanding of this condition.