Iodine deficiency is known to result in deficits in neuropsychological development in children born to iodine deficient mothers.  However, a remedy in terms of iodisation of table salt as is the norm in most countries, has not been embraced by Ireland. The borderline iodine status of the Irish population persists unchanged over the past 20 years with the annual median urinary iodine (UI) varying from 62.9 to 105 µg/L; overall median 72.4 µg/L (WHO recommended  100 µg/L).  Exposure to a seaweed rich environment allowing for intake by respiration of seaweed derived gaseous iodine, rather than simple proximity to the sea, confers advantages in terms of iodine intake with 21/46 (45.6%) of schoolchildren in seaweed rich coastal areas having UI values > 150 µg/L compared to 1/28 (3.6 %) and 2/93 (2.2%) in low seaweed abundant coastal and inland areas respectively.   The corresponding values for adult females were 31/72 (43%), 7/60 (11.6%) and 21/132 (16.0%). The findings support introduction of iodine prophylaxis through Universal Salt Iodisation (USI), to ensure that women of child bearing age have access to sufficient dietary iodine.

Reports on a high prevalence of goitre in the 1940s in South Tipperary led to a Medical Research Council of Ireland (MRC) study1 which demonstrated that up to 60% of schoolchildren tested had goitres with the suggestion that larger goitres were associated with learning difficulties1,2. These results  summarised by O’Donovan3 led to successive studies on Irish populations4-7. Children born to iodine deficient mothers carry the risk of not achieving their full intellectual potential as the fetus does not develop a thyroid until 13-15 weeks gestation, depending on the mother to provide thyroid hormones for both8-11. Current WHO recommendations for iodine intake were in the man derived from school aged children or high risk population groups such as women of reproductive age, pregnant/lactating women or young children.  Daily iodine requirements vary from 90 – 120 µg for children;150 µg for adults and 250 µg  for pregnant/lactating women12.

Studies in Ireland on pregnant mothers and their offspring 6-9 revealed dietary iodine intake less than half that of 250 µg/day recommended by the WHO12,13. Recent worldwide  data has thankfully shown  a decline in all grades of iodine deficiency, mainly due to the introduction of salt iodisation programmes, so called Universal Salt Iodisation (USI)12,13 which is currently the preferred method of achieving  population iodine sufficiency.  The island of Ireland which shares with the neighbouring island of Great Britain  the doubtful distinction of having no formal programme of salt iodisation (< 5% of salt sold for human consumption is iodised)14 remains at risk from iodine deficiency with dietary iodine intake being entirely opportunistic. In the present report we present historical data providing an indication of dietary iodine intake in the Irish population, as judged by measurement of urinary iodine concentration (UI µg/L) over 20 years of study. Conventional wisdom decrees that iodine intake in coastal regions exceeds that in inland areas.  Seaweed is the major source of iodine and is known to release gaseous iodine (I2) into the atmosphere15,16. We therefore raise the question of the importance, in terms of iodine intake, of dwelling near or remote from the coast.

Urine samples were collected from adult female volunteers over the years 1988-2009. Numbers for each year varied but when sample size was <50, studies from centres in different areas were combined to reflect iodine status in a particular year. The omission of individual years indicates the absence of studies at that time. To determine if seaweed derived atmospheric iodine ingestion contributed to iodine intake in human populations, urine samples were obtained from female schoolchildren and adults living in coastal areas seaweed rich (Carna Co Galway) and of low seaweed abundance (Dublin, Galway and Belfast cities) and in inland areas of Ireland  (Dungannon, Co Tyrone and Mullingar Co Westmeath). Schoolchildren were aged < 15 years. Adults were female volunteers aged > 18 years. In the case of schoolchildren, samples were collected at the schools attended whose pupils resided in areas adjacent to the school.  Similarly, samples were obtained from adults attending general practices in the selected areas.

Urinary iodine (UI) was measured in spot samples  and expressed as µg iodine /L urine (µg /L) was measured as described by Ohashi et al.12,17. Quality control was assessed under the Centre for Disease Control (CDC, Atlanta, Georgia, USA) EQUIP programme.  Study group values were expressed as medians and % of individual values < 50µg/L or >150 µg/L 12 Statistical analysis was performed using Wilcoxon’s rank sum test for unpaired samples and the chi squared test (Fisher’s exact test). Random urine samples were collected and stored frozen until assay. All samples from adult volunteers were obtained with informed consent and labelled anonymously.   In the case of schoolchildren, samples were collected in the school with prior written parental consent having being sought and granted. 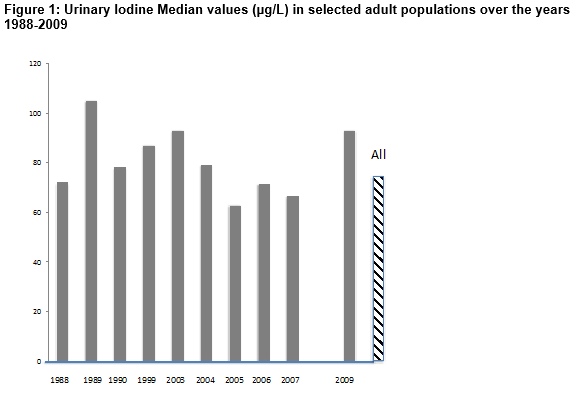 Dietary iodine intake in Ireland was assessed by measuring UI in a variety of sample populations over the years 1988-2009.  Median values as shown in Figure 1 ranged from 62.9 µg/L in 2005 to 105µg/L in 1989 with an overall median value of 72.4µg/L. There was no particular trend in findings observed over the years, although median values tended to dip between 2005 and 2009. The distribution of individual UI values (µg/L) over years 2005-2009 as seen in Figure 2 demonstrates that 49% of values were < 100 µg/L, indicative of mild iodine deficiency with 23% having moderate deficiency (<50µg/L) and 2% severely deficient (<20 µg/L)12,13. Values are consistently much lower than the WHO recommended daily intake of 150µg (UI ~97 µg/L)18. Examining median UI values obtained in female subjects in Summer (April-September) and Winter (October to March) months showed that althoµgh median UI varied over the years, recorded values were consistently higher in Winter (80-140 µg/L) compared to Summer (42-80 µg/L). 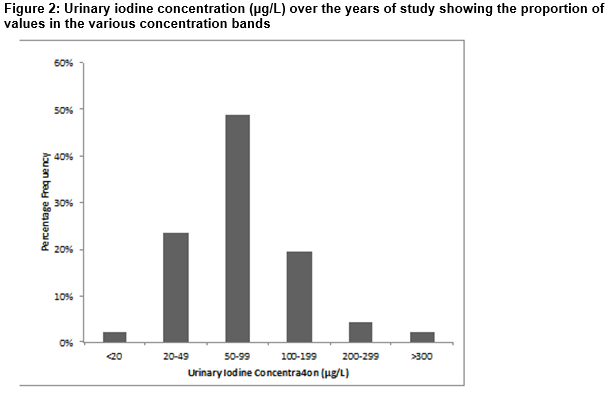 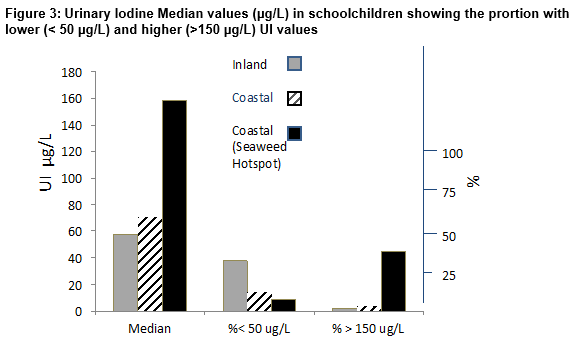 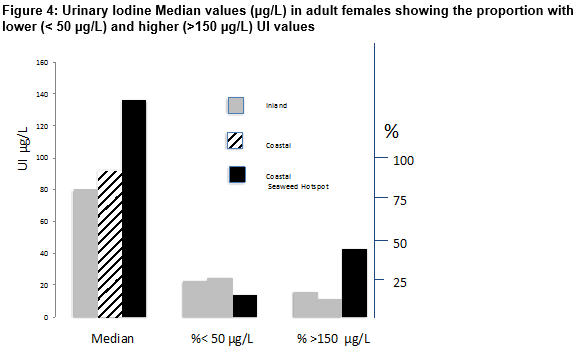 The historical results for UI in Irish populations, even though they came from available rather than structured study groups, show relatively little change over the 20 years of study and suggest no significant alterations in dietary iodine intake in the Irish population. There is no obvious change in dietary preferences, at least in terms of iodine intake, which is not surprising as in the absence of iodisation of table salt iodine intake continues to be opportunistic. In contrast to an earlier era, where foodstuffs were frequently sourced from the immediate locality, the current wide distribution of supermarket chains would suggest that regional variation in food intake is currently of much lesser significance. Thus the increased prevalence of iodine deficiency related goitre reported in Tipperary in 19391-3 and in Tyrone and Antrim19 in 1964 is probably now of only historical significance. The consistently low UI values observed in Ireland were not accompanied by any significant evidence of thyroid hypofunction of non - autoimmune origin in Donegal (The Rosses’ Survey)20. Also findings for neonatal TSH in Ireland assessed over the years 1995-2006 while showing a small but significant trend towards higher TSH21 did not achieve a level indicative of iodine deficiency22. Findings of seasonal variation in UI with higher values in Winter, coinciding with higher dairy milk iodine values arising from the practice of feeding dietary supplements, including iodine, to cattle brought into wintering sheds5 no doubt contributes to the wide variation in percentage frequency distribution of individual UI values. These values are supported by recent findings in a UK national study of UI in schoolgirls23. Interestingly the lowest value obtained was from N. Ireland (Belfast Median UI 62µg/L with 31% of values < 50µg/L; not seasonally adjusted).  Such studies both in Ireland and the UK have shown that iodine deficiency persists to a significant extent in both female schoolchildren and adult females, for whom it poses a significant risk.

Results for UI from both schoolchildren and adults in the present study confirm that living in a coastal environment does not automatically ensure adequate iodine intake, as the apparent iodine deficient status of the Irish population might not have been predicted on an island where few live more than 200Km from the sea.  Iodine deficiency has been reported in many coastal areas12,13,18 while recent studies have shown that coastal communities on the Atlantic islands of Madeira and the Azores have median UI values lower than on the Portuguese mainland24. These islands support very little seaweed growth (Limbert, Private Communication). Thus the conventional wisdom that iodine intake in coastal regions exceeds that in inland areas needs to be re-evaluated. What appears to make a significant contribution to the coastal iodine environment from this study is the presence of abundant seaweed growth as evidenced by the higher median UI values observed in both schoolchildren and adults living in coastal areas close to abundant seaweed growth (hotspots). The most significant manifestation of this was the % of individual UI values >150µg/L which was 45.6% in schoolchildren and 43% in adults living near a seaweed hotspot  compared with lower prevalences (2.3-16%) in subjects living in inland or low seaweed abundant coastal areas. While factors other than living near seaweed hotspots may explain the differences in UI observed, the findings suggest or at least do not exclude, the possibility of seaweed derived gaseous iodine inspiration through respiration making a contribution16. Consumption of iodine rich foodstuffs might have applied when food consumed was almost exclusively locally produced but is less likely in the era of supermarkets with widely sourced products. Thus the findings in this study do not support the thesis that living in close proximity to the sea is in itself a guarantee of adequate iodine intake. This may require a seaweed rich environment, allowing for intake by respiration of seaweed derived gaseous iodine. Possible confounders to the results include the failure to obtain detailed dietary information and data on possible exposure to saeweed derived gaseous iodine on all subjects and findings are therefore dependent on the geographical location of sample collection.

Problems resulting from an inadequate supply of thyroid hormones leading to impaired brain development have been well documented10. In contrast to congenital hypothyroidism, which can be successfully treated by T4, the effects on brain development of maternal hypothyroidism or hypothyroxinemia are irreversible25. Arrested brain development in children can be prevented by ensuring that young women of child bearing age have access to sufficient dietary iodine10,11. Dairy milk intake is critical as milk consumption has been shown to be the most reliable source of dietary iodine intake in Nothern European countries, including Ireland 5,14.  However the most effective way of ensuring sufficient iodine intake  is by iodisation of table salt (USI)13,18. It is important to stress that this does not involve increased salt consumption but merely changing the formulation of the salt to include iodine. In view of the persistence of iodine deficiency, as evidenced by the continuing low UI demonstrated over a 20 year period in this report, implementation of a policy of USI, which is not expensive, is urgently needed in Ireland.

The cooperation of the parents and schoolchildren of participating schools in both the Republic of Ireland and Northern Ireland. Thanks to the many colleagues throughout Ireland who facilitated the collection of urine samples.The assistance of HSE West, K Kyne, M FitzGerald, J O’Donnell of Galway and R Fitzgerald of the Martin Ryan Institute, NUI, Galway. Clinic Secretaries of Carna and Knocknacarra Medical Centres. Thanks to E Limbert for helpful discussion re Portuguese data. Financial assistance was provided by the Health Research Board and the Clinical Endocrinology Trust.

1. Shee JC. Report of the Goitre Survey in South Tipperary for the Medical Research Council of Ireland Irish J of Med Sci 1939; Nov. 1-3.

20. Delange F. 1998 Screening for congenital hypothyroidism used as an indicator of the degree of iodine deficiency and of its control. Thyroid 8:1185-1192

22. Delange F. Screening for congenital hypothyroidism used as an indicator of the degree of iodine deficiency and of its control. Thyroid 1998; 8:1185-1192.