Paget-Schroetter Syndrome (PSS) or effort thrombosis of the axillary-subclavian venous axis is a rare disease affecting healthy young adults which requires a high index of suspicion to diagnose. Management often requires not only anticoagulation but also thrombolysis with first rib resection to prevent recurrence and complications. We present a case of a 31-year-old male who presented to our emergency department with pain and swelling of his left upper limb. He was diagnosed with PSS and underwent; anticoagulation, catheter directed thrombolysis and planned for first rib resection.

Deep venous thrombosis (DVT) is most commonly associated with the lower limb veins. Venous thrombosis of the upper extremity involving the deep venous system is uncommon. It can present in young healthy adults with no or little-known predisposing factors and variable symptoms. Diagnosis can be difficult with resultant delays in management.

A 31-year-old male presented to the emergency department with a 3-day history of pain and swelling of the left upper limb. He denied any insect bites or trauma had occurred but admitted he had gone to the gym prior to onset of symptoms. The patient had no other significant medical or family history other than being a smoker. On examination his left upper limb was congested and swollen from his shoulder to his hand.

Pulses were normal on palpation (axillary, brachial, radial and ulnar). He had full range of motion at all joints with no neurological deficit. Chest x-ray was unremarkable, and his inflammatory makers were mildly elevated (WCC- 9.7 x 109/L, CRP- 31.9mg/L and D-dimer- 207ng/L (normal range: 0 – 200ng/L). A left upper limb venous Doppler scan revealed non-occlusive thrombus of the left subclavian and axillary veins. Findings of an MR Venogram were consistent with the venous Doppler scan but also showed a distended left subclavian vein extending proximal to where the vein crosses the left first rib close to the site of the insertion of the scalene anterior muscle, suggestive of extrinsic compression at the same site (Figure 1). 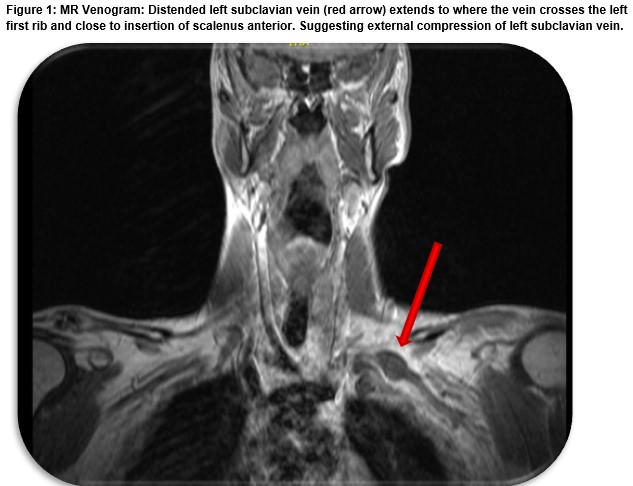 He was admitted under the vascular team with a diagnosis of Paget-Schroetter Syndrome (PSS). He was managed with above elbow compression stocking, elevation and therapeutic Tinzaparin. The patient underwent a venogram with catheter directed thrombolysis using recombinant tissue plasminogen activator (rTPA) successfully. A repeat Doppler ultrasound and MR venogram revealed resolution of thrombus and improved flow. He remained stable and was discharged on apixaban with a date for first rib resection and follow up in vascular outpatients.

Effort thrombosis of the upper limb or PSS involves axillary-subclavian vein thrombosis as a result of repeated strenuous activity of the upper limb and positioning of the subclavian vein relative to the first rib and clavicle. It has an incidence of 1-2/100,000 individuals per year and accounts for 20% of upper limb DVTs occurring mostly in young adults 1. Clinical features are variable, ranging from asymptomatic cases to patients with pain, swelling and profuse collateral circulation, as in this case. Doppler ultrasound is the first line investigation and is also a useful tool in the hands of emergency doctors in making a quick diagnosis if positive findings of venous thrombosis are seen 2. However, ultrasound can be falsely negative due to difficulty in accessing the non-compressible areas of the subclavian vein just below the clavicle. Therefore, it is important to proceed to MR or CT venogram if the Doppler ultrasound is negative in cases with a high index of suspicion 3.

Management is with anticoagulation, systemic thrombolysis or catheter directed thrombolysis is indicated in larger symptomatic DVTs, such as in this case. A recent meta-analysis found that in patients with acute effort thrombosis who undergo thrombolysis, permanent symptom relief and long-term patency are more likely to be achieved in patients who underwent first rib resection 4. Delay in diagnosis and management of more than 6 weeks can lead to serious complications such as post-thrombotic syndrome (chronic pain, venous hypertension, swelling and ulceration of the extremity), recurrent thrombosis, septic thrombophlebitis and pulmonary embolism 5. As PSS is a rare condition affecting younger individuals which requires timely management to prevent serious complications, it is important to raise awareness amongst primary care and emergency medicine doctors.

Conflict of Interest
There is no conflict of interest.