A Comparison of Summer and Winter Emergency Hospitalisations in Ireland

There is increasing demand on the Irish health service, particularly in winter months. This study described and compared acute hospitals admissions across summer and winter periods from 2015 to 2018. The analysis used Hospital In-Patient Enquiry data accessed through the National Quality Assurance Information System – NQAIS Clinical. There were 84 additional emergency hospitalisations in winter per week compared with summer (1.2% increase).  Across diagnostic categories, emergency hospitalisations reduced in winter, except respiratory conditions which increased by 379 per week representing a 40.5% increase. The profile of emergency respiratory admissions were similar in summer and winter in terms of age, length of stay, day of week and medical card status. Length of stay was approximately one day longer for weekend admissions in both seasons.  This research highlights the importance of taking a whole-population approach to winter resilience planning, focussing on prevention and optimal management of respiratory conditions.

The life expectancy of the Irish population has improved over recent decades. This ageing population coupled with an increased prevalence of chronic disease places an increasing demand on health services as outlined in The Health Services Capacity Review.1

The configuration of the Irish health system, which is characterised by hospital-centricity and weak orientation to primary and community care, is poorly placed to respond safely, effectively and efficiently to evolving population health needs.2 The recent financial crisis has impacted the resilience and capacity of health services.3 The current health system is challenged with high bed occupancy, trolley waits and waiting lists. Slaintecare has identified a need to grow capacity and shift the balance of care from hospitals to primary and community care so as to deliver timely access to health and social care.4

The strain on health system resilience is especially evident during winter months with the highest level of emergency admissions in December.5 The Health Service Executive (HSE) produces a plan each winter to address bed capacity, focusing on such issues as demand management, increasing throughput and better facilitating egress, and thereby keeping as many people as well as possible, improving patient’s access to the right care in the right place at the right time, and reducing the numbers of patients waiting to be discharged from hospital.6

While excess winter mortality is relatively well-studied, epidemiological characterisation of increased demand for health services in winter is needed to better inform planning and resilience.  In the UK the winter increase in respiratory diseases has been identified as causing considerable pressure on the healthcare system, with almost a doubling of non-elective admissions in this disease group.7,8   The impact of a drop in temperature has been characterised such that for every degree drop in temperature below 5C, there is a subsequent 0.8% increase in respiratory admissions in the following weeks.9 A British Thoracic society study reported up to 40% of patients admitted with community acquired pneumonia were classified as low severity suggesting a proportion might have been suitable for treatment at home.10 Re-admission rates in the UK are reported to be high for those with chronic obstructive pulmonary disease (COPD) where they have been found to be 24% at 30 days.11 Strengthening services such as access to ambulatory emergency care, early supported discharges, rapid access respiratory clinics and alternative use of elective capacity are areas identified which may alleviate the pressure caused by this winter surge.12

The purpose of the study was to describe the underlying patterns of admission across summer and winter periods and to identify patient groups that might explain the surge in emergency admissions during winter months.

HIPE data originates from the publicly funded acute hospitals. The data is collated and quality assured by the Healthcare Pricing Office (HPO) on a national basis.5 The database includes the patient’s age, gender, admission type, and date of admission and discharge, the principle diagnosis and up to 20 other diagnoses (International Classification of Diseases Tenth Revision (ICD-10-AM)14 The admission/principle diagnosis was used to classify the diagnostic category based on the Clinical Classification System (Irish modification). Data relating to adult in-patient emergency admissions to acute hospitals in Ireland from 2015-2018 was included. Patients aged less than 16 years, maternity, day cases and elective admissions were excluded.

Summer was defined as May-August (week 18-35) and winter as November-February (week 44 to week 9). The data was averaged across the three year period when appropriate. Length of stay was calculated using the arithmetic mean. The Charlson Index was used to categorise patient’s co-morbidities based on the International Classification of Diseases (ICD) diagnosis codes.15 A score of 10 or more was categorised as high complexity.16 The characteristics of patients admitted in both seasons were compared using the Chi-square test and Fisher’s Exact test as appropriate.

Seasonal variation in all emergency admissions

Respiratory, cardiovascular disease (CVD), renal/reproductive disease, injury/poisoning, cancer, neurological and gastrointestinal illnesses account for 78.6% (831,918/1,057,926) of emergency admissions annually. The seasonal trend for these conditions over the past 3 years is illustrated in Table 1.   There was an increase in respiratory admissions during the winter months whereas a decrease in admissions was observed in all other diagnostic categories (7df, Chi Sq 73.0, p<0.0001).

The majority (67.8%) of emergency respiratory admissions were due to chronic obstructive pulmonary disease (COPD), lower respiratory infection and pneumonia.  Albeit a higher incidence of cases was observed in the winter, the proportion in each diagnostic subgroup was similar in both seasons as shown in Table 2. During the summer months an average of two influenza admissions per week occurred compared to 61 per week in winter. 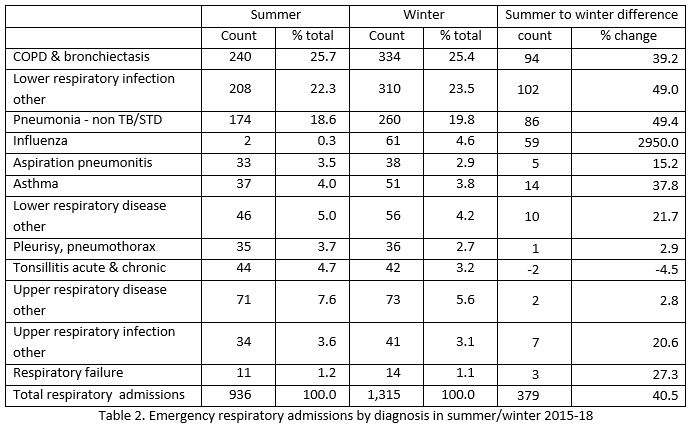 The age profile of patients admitted as an emergency with respiratory illness was similar in summer and winter. The number of admissions was greater in those aged over 55 years with the peak occurring in the 75-84 year age group in both seasons as shown in Figure 1.  The proportion of patients with a medical card was similar in summer and winter at 74% and 75% respectively. 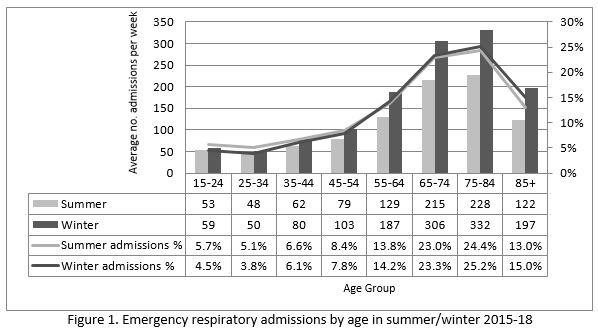 The pattern of respiratory admissions by the day of the week was similar throughout the year, being consistently lowest on Saturday and Sunday. There majority were documented to take place between 8am and 7pm, peaking in the early afternoon (Figure 2). 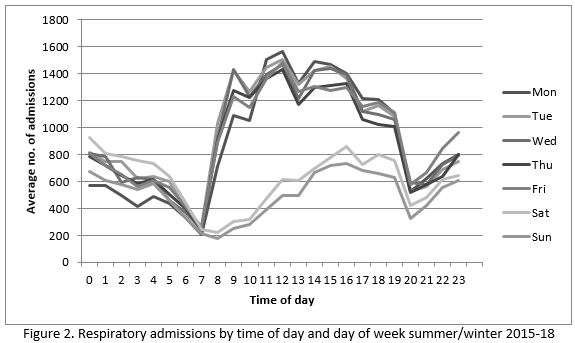 The crude mortality rate of patients admitted as an emergency with respiratory illness was slightly higher in winter at 6.1% versus 5.3% in summer although the difference was not statistically significant. (OR 1.17, 95% CI 0.81-1.70, p=0.39).

This study has characterised the seasonal epidemiology of hospital admissions in adults in Ireland 2015-2018. Importantly, it has identified that respiratory illness was the dominant driver of increased emergency admissions during the winter season across the entire acute hospital service. Over the last three winters there was a relative increase of 40.5% emergency respiratory admissions nationally. Data from the Towards a Revolution in COPD Health (TORCH) study found a two-fold increase in COPD exacerbations during winter with approximately 20% of these people requiring hospitalisation regardless of season.17 In the UK an 80% increase in lung disease was reported in winter but this included children.18

Chronic obstructive pulmonary disease, pneumonia and lower respiratory tract infections were the most common causes of emergency respiratory admissions in both summer and winter. This finding suggests that the winter surge of acute respiratory admissions to hospital is triggered through a common pathway most likely to be of infective origin (viral, bacterial or both). Air quality and extremes of air temperature can also exacerbate respiratory illness in particular COPD.20,21

There are commonalities associated with prevention and treatment of acute respiratory conditions which can be strengthened through active, planned chronic disease case management and self-management support in line with care pathways and models of care.22 The provision of ambulatory emergency care, rapid access clinics, and early supported discharges may help to alleviate the pressure on the health system.8,12 Self-management support should be optimised including access to pulmonary rehabilitation services and smoking cessation services.23 This could be supported with implementation of the “Making Every Contact Count” framework offering brief advice and interventions to patients in terms of their lifestyle risk factors.22 The uptake of influenza and pneumococcal vaccination should be optimised. There was a marked improvement in influenza vaccine uptake among health care workers in recent years but uptake among those aged over 65 years has decreased in recent years.24

The HSE winter plan6 and Slaintecare reports4 outline the importance of providing the right care in the right setting at the right time for patients. This research indicates that the prevention and management of respiratory illness in the community setting require special attention so as to minimise the winter surge in emergency admissions.  The National Healthcare Quality Reporting system supports the need for attention to this area outlining that COPD admissions remain high although they have slightly reduced since 2008.24In the UK a respiratory taskforce has been established to bring an increased level of attention and organisation to respiratory illness.8

This study concludes that the increase in emergency hospital admissions during winter was explained by a marked seasonal increase in respiratory illness, primarily chronic obstructive pulmonary disease, pneumonia and lower respiratory tract infection. The demographic and clinical profile of patients with acute respiratory illness was broadly similar in summer and winter. The findings of this study imply that the winter initiative should have a strong and purposeful focus on the prevention and management of acute respiratory illness both in the community and in hospitals so as to minimise the winter surge in emergency admissions. The lessons learned may translate to all seasons.