A Cost Minimisation Analysis of NOACs Compared to Warfarin to Attain Therapeutic Anticoagulation amongst AF Patients, Pre- and Post- Cardioversion

Atrial fibrillation (AF) affects approximately 1-2% of the population worldwide and is a major cause of stroke1, which is a major contributor to disability and death. AF is managed using anticoagulants (warfarin or new oral anticoagulants (NOACs)) and restoration of normal sinus rhythm (NSR) using direct current cardioversion procedure (DCCV). The latter is an outpatients procedure whereby synchronized, low-voltage electrical shocks are administered to the heart to restore a NSR2. Evidence demonstrates that DCCV is effective and safe, with success in over 90% of cases whereby NSR is restored3,4. Nevertheless, less than half of patients remain in NSR after one year3 4. Factors which influence success and maintenance of NSR have been investigated and include duration of AF, cardiac size and function, rheumatic heart disease, significant mitral valve disease, delays in conversion, left atrial enlargement, and older age3. Furthermore, therapeutic anticoagulation for 3-4 weeks prior to DCCV is recommended to reduce the risk of thromboembolism3,5, from 3-5%5-8, to less than 1%3,9,10. The traditional anticoagulant prescribed is warfarin, and while this is effective in reducing the risk of thromboembolism it has been found to be unpredictable, thus requiring monitoring and adjustments in dosage11 which can contribute to delays in performing DCCV. This can have a negative impact on the success of DCCV and maintenance of NSR in the longer term3.  NOACs have emerged as safe and effective alternatives to warfarin [12-14], eliminating the need for monitoring and dose adjustments3. While these advantages of NOACs make them attractive for patients and clinicians, their high drug cost relative to warfarin means their reimbursement in public health care systems may be difficult. This study aims to determine the cost impact of using NOACs compared to warfarin to attain therapeutic anticoagulation for patients with AF pre- and post-DCCV.

Ireland is chosen as a case study for this cost minimisation analyses as it represents a typical public health care system with a substantial reimbursement system for pharmaceutical drugs15,16. It is expected that by 2050 the population aged over 65 years will double to 1.4 million17.  While, somewhat behind its neighbours, Ireland has the opportunity to implement cost effective policies and initiatives when managing services for the silver economy. Furthermore, while several NOACs (Apixaban, Dabigatran and Rivaroxaban) have been deemed cost effective in Ireland by the National Centre of Pharmacoeconomics (NCPE), budget implications and concerns over safety have hindered their use18-20.

A cost minimisation analysis (CMA) was undertaken to reveal the costs associated with warfarin compared to the NOACs for DCCV for AF patients. A CMA is a type of economic evaluation wherein two or more interventions are compared22. Here the administering of NOACs is compared to the administering of warfarin pre- and post-DCCV. A key assumption of such an evaluation is that the outcomes of the different programmes are broadly equivalent22, thus only the programme which delivers the outcome at the least cost is preferred. To conduct the CMA there were two stages. Firstly, to determine there was no expected difference in outcome (i.e. in achieving NSR after DCCV), between those administered warfarin and NOACs, propensity score matching was performed.  The nearest neighbour-matching method was employed to estimate standard errors to determine if the difference in outcome (i.e. achieving NSR) is statistically different between the two treatments. Secondly, a micro-costing study was performed to reveal the costs associated with using NOACs compared to warfarin for patients with AF pre- and post-DCCV. This involved identifying, measuring and valuing the associated resource use. To identify and measure the costs, an observation study was performed and expert opinion was elicited in CUH in January 2014. To value the costs, secondary data from previous studies was used where available; public sector salary scales were used to value staff costs and overheads as per HIQA recommendations23; and drug costs were sourced from the Primary Care Reimbursement Service (PCRS) and published sources. 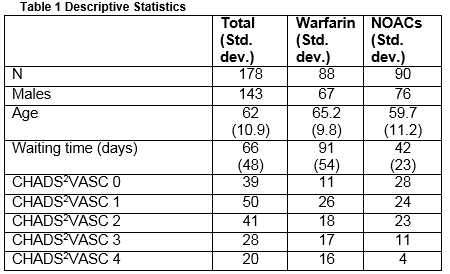 Having determined that there was no statistically significant difference in outcomes after DCCV between those for whom therapeutic anticoagulation was achieved with warfarin and NOACs, a CMA was performed to indicate which programme is the most cost effective.

The cost of pharmaceutical drug costs was sourced from the Medicines Management Programme review of oral anticoagulants for stroke prevention with AF20. The price per day for dabigatran is €2.54 (150mg and 110 mg) and rivaroxaban is €2.29 (20mg and 15 mg). The cost of warfarin was sourced from Barry18 as €0.076 per day (adjusted for inflation).

Patients receiving DCCV should remain on anticoagulants up to six weeks post procedure. This amounts to additional pharmaceutical costs of €105.05 for patients administered NOACs. For patients adminstered warfarin, the pharmaceutical cost is €3.20, and the monitoring costs €129.36 (6 visits). Thus the total cost for those administered NOACs for anticoagulation before and after DCCV is €209.53 and for warfarin is €419.23. The incremental cost is €209.70. Administering NOACs being almost 50% less expensive than warfarin when weekly monitoring and pharmaceutical drugs costs are accounted for.

There are limitations to this study which centre on the data employed, particularly pertaining to sample size and lack of randomisation. In addition, the authors are cognisant of the variability in the results owing to the real world nature of the data. However, should waiting times be improved upon it would reduce the cost associated with DCCV when administering NOACs further.

This analysis considers patients who were not previously administered an anticoagulant. Given the demographics of the patient population it is likely that patients with a higher risk of stroke owing to AF may require long term anticoagulation post DCCV. Long term cost effectiveness of NOACs compared to warfarin has been investigated by decision makers on a country-by-country basis. This analysis revealed that administering NOACs pre and post a DCCV can reduce costs relative to administering warfarin without impacting outcomes; thus can be considered cost-effective.

Since the data was collected, new guidance on preferred prescribing has emerged in Ireland. Despite three NOACs being considered cost effective, warfarin remains the first line therapy for stroke prevention in AF in Ireland20. Apixaban is the first line option when warfarin is not considered suitable owing to an allergy or labile INR levels20. As populations age and AF becomes more prevalent, patient demands for the latest drug or technology increase thus placing increasing pressures on the delivery of health care.  Ensuring the right patient receives the right treatment in a cost-effective manner continues to be a challenge. This study demonstrates how economic evaluations can be used to inform resource allocation decisions in clinical settings.

14. Yadlapati, A., C. Groh, and R. Passman, Safety of short-term use of dabigatran or rivaroxaban for direct-current cardioversion in patients with atrial fibrillation and atrial flutter. The American journal of cardiology, 2014. 113: p. 1362-1363.