Farming is the most dangerous occupation in Ireland1 and the incidence of farm accidents is rising. This study examines major farm animal-related trauma treated at Cork University Hospital over a 5 year period. There were 54 patients admitted to Cork University Hospital (C.U.H.) with major farm animal-related trauma. The median age was 56 years, 85% were male and the median hospital length of stay was four days. Older patients had longer lengths of stay; 5.5 vs 4 days (p=0.026). Tibia/fibula fractures were the most common injuries (N=13, 24%); head injury occurred in six patients (11%). There were 32 (59%) patients who required surgery, the majority for orthopaedic injuries. There were nine patients (16.7%) admitted to the intensive care unit; their median ICU stay was four days. Injury prevention and treatment strategies require that the age profile, mechanism of injury and injury patterns of farmers sustaining animal-related trauma is recognised.

Introduction
Farming is the most dangerous occupation in Ireland; between 2009 and 2015, agricultural workers suffered 138 fatal workplace accidents, out of a total of 296 fatal workplace accidents in Ireland1. While farms make up just 5% of our workplaces, fatalities in the sector account for almost a half of all workplace deaths2. Added to this, agriculture workers are more than twice as likely to suffer non-fatal workplace injuries compared to other industries (51 vs 21 per 1,000 workers per year)1. Farm injuries increased by 35% between 2006 and 2010; 95% of these cases required medical attention, with 49% requiring hospital inpatient treatment; 15% of those injured lost 100 or more workdays as a result of their injuries2. The majority of farm injuries reported to the Health and Safety Authority are of a serious nature, and have significant impacts on farmers’ lives and livelihoods. Most farms are family-run, where the whole family is at risk of workplace injury, compounding the social and economic risk associated with farm injuries2,3.

There are 6.6 million cattle on approximately 140,000 farms in Ireland4; 78,000 are beef production farms, 16,000 are dairying farms, 14,000 are sheep farms, 17,000 are a mix of grazing livestock, and the remainder are tillage farms. Therefore 94,000 (67%) specialise in bovine livestock. A study conducted at Drogheda on cow-related trauma established that cow-related trauma is equivalent to high velocity trauma by comparing injury severity scores5. A recent study at Mayo General Hospital found that animal-related trauma was the leading cause of both fatal and non-fatal injuries on farms6. Treating large animal-related trauma as high velocity trauma akin to road traffic accidents is in keeping with previous work in this area7. Due to the distinct features of large animal-related trauma, and its high incidence on Irish farms, this study aims to conduct a retrospective, descriptive study of farm animal-related major trauma at Cork University Hospital, and in doing so to document and describe this trauma subset.

Methods
A retrospective chart review was conducted to collect information on patients admitted to Cork University Hospital with major trauma caused by farm animals over five years from 2009 to 2013. Patients were identified by CUH Records Department using the Hospital Inpatient Enquiry (HIPE). Cork University Hospital (CUH) is the largest university teaching hospital in Ireland with all trauma related specialties represented on campus. CUH has 800 beds and acts as the tertiary referral centre in the HSE Southern area. It has a catchment population of 550,00 and is a supra-regional centre for a population of 1.1 million (including Patients from Limerick, Clare, Tipperary, Waterford and Kilkenny). CUH has approximately 66,000 ED attendances per year, serving a mix of urban and rural patients.

For the purposes of this study, major trauma was defined by the inclusion criteria used for case inclusion in the Trauma Audit and Research Network (TARN), although the study predated the establishment of major trauma audit at this institution. This may be summarised as trauma patients whose lengths of stay are 72 hours or more, trauma patients admitted to a high dependency area, who die, or who are transferred to another hospital for specialist care8. Although fragility fractures in general are not recorded in the TARN database and isolated neck of femur fractures are specifically not reported, we included hip fractures in this study due to their impact on work days missed and their associated high morbidity and mortality.

The HIPE department of CUH compiled a report on patient records matching the search terms ‘animal,’ ‘cattle,’ ‘farm,’ ‘agriculture; forestry and fishing,’ and ‘horse’ between 2009 and 2013. This search was compared with the admission ledgers from the Emergency Department for that period to minimise the risk of not including an appropriate patient. A chart review was undertaken using two independent data extractors and results were cross checked for consistency. Raw data was documented on a data collection template (hard copy) and then recorded in an excel spreadsheet. Data was then exported to IBM SPSS Statistics software for analysis. Descriptive statistics, frequencies and graphs were produced. Mann Whitney U tests were used to compare medians when analysing the data for statistical significance.

Results
Patient Demographics:
During the study period 2009 to 2013, there were 54 patients admitted to Cork University Hospital with major trauma caused by a farm animal. There was one fatal accident admission and 53 non-fatal accident admissions. Of these patients, 46 were male (85%) and 8 were female. The median patient age at presentation was 56 years (range 2 to 83). 20 patients (36%) were over 65 years. The age breakdown is shown in figure 1. 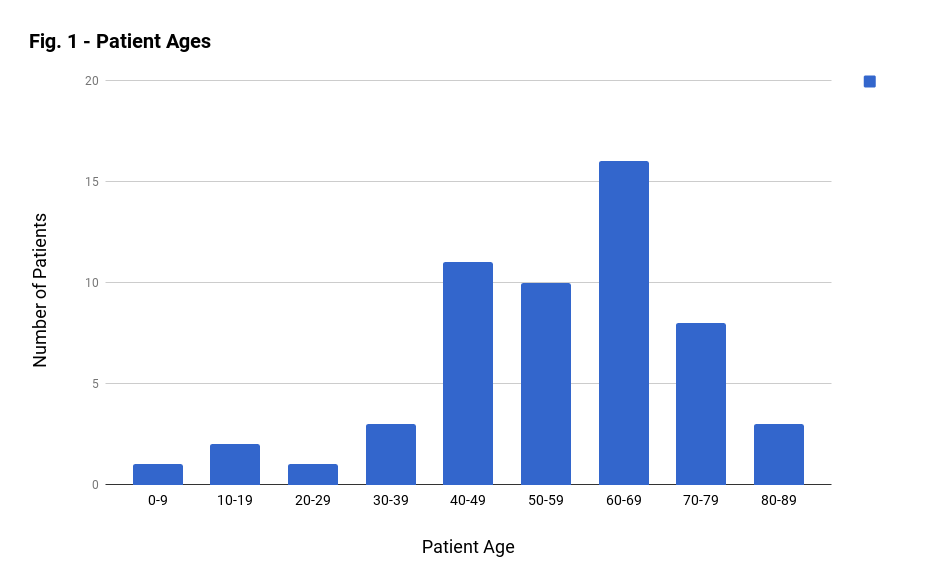 The mean length of stay was ten days (median four), with the range between 3 and 90 days. Older patients carry an increased burden of farm animal-related trauma, with just seven of the patients (13%) being below the age of 40 years. There was an association between patient age and length of stay in hospital, with older patients staying longer in hospital. The median length of stay for patients over 65 was 5.5 days, versus 4 days for those under 65 (p=0.026). Predictably, the most common occupation was farmer, accounting for 50% (n=27) of patient occupations, however 16 (29.6%) patients’ occupations were not recorded. Farm labourer (n=3, 5.6%) was the second most common, followed by student (n=2, 3.7%), while two patients (3.7%) were recorded as retired. The most common animal involved was cow (n=35, 65%), followed by bull (n=12, 22%) and horse (n=2, 3.7%), while 5 were not recorded. Bovine animals accounted for over 95% of those recorded.

Injury Patterns:
Limb fractures and head injuries were the most common injuries. Injury patterns are described in figure 2. 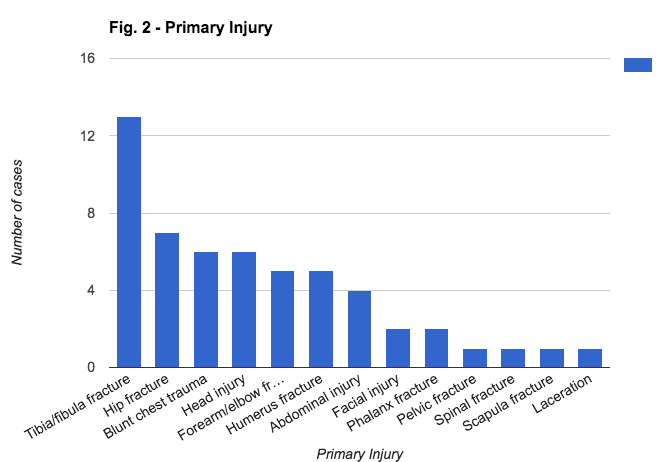 Presentations were analysed by calendar month. July saw the most presentations (N = 11, 20%), coinciding with when cows are in oestrous and the bull is with the herd.

There was one paediatric trauma in this cohort, a two-year-old suffered a tibia fracture as a result of being struck by a cow. There was one fatal injury in this patient cohort; the patient was >80 years and suffered a traumatic subarachnoid haemorrhage after receiving a kick from a cow. His case was discussed with the Neurosurgical service and after consultation with the patient’s family, a palliative approach to care was adopted. 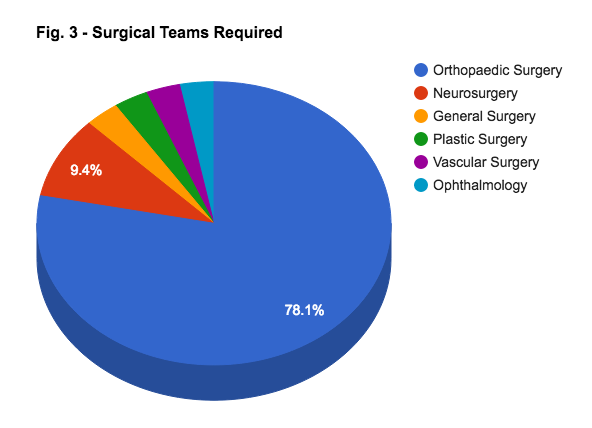 Discussion:
Over one third of farmers who suffered major trauma were over 65 years old. In most industries, these workers would be retired. Older farmers stayed longer in hospital than their younger counterparts. This compounds the economic impact of injuries suffered, on both a personal level and to the sector. In this study only 13% of patients with major trauma were under 40 years old. The aging profile of farmers sustaining major injury by animals mirrors the ageing demographic of Irish farmers. In 2010, more than a quarter of all farm holders were over 65 years old. Over half (51.4%) of all farmers were aged over 55 years4. This was an increase from 39.5% in the year 20002,9.

A number of studies have been carried out in Irish hospitals on these injury patterns. A countrywide study between 2005 and 2014 described the common injury patterns and aetiologies associated with fractures and fatal injuries sustained on Irish farms3. It found the most common injury pattern was forearm, wrist and hand fractures (29.8%) and the most common aetiology was trauma related to tractor and other farm vehicles. A 2014 study at Mayo General Hospital examined all farm-related trauma that presented to the hospital over a seven year period6. They found that animal-related trauma was the leading cause of both fatal and non-fatal injuries on farms. This is in keeping with a number of other published studies10,11,12. The existing literature has concluded that large animal-related trauma should be treated as high velocity trauma and be included in activation criteria for the trauma team5,7.

Current data indicate that dairy farming is the most dangerous type of farming in Ireland1,2,12. With the removal of quotas from Irish farms in 2015, it is feared that this will disimprove dramatically. It has been estimated that milk production on Irish farms would increase by between 20% and 40% in 201613. The intensity of farming reflects the level of fatalities16.

In order to deal with this extraordinary period in Irish farming from a public health perspective, it is vital that the Irish Farmers’ Association, Teagasc, and the Health and Safety Authority continue and strengthen their efforts to raise awareness of the dangers facing Irish farmers, continue to improve the safety of workers on Irish farms and try to reduce the number of fatal and non-fatal injuries which occur on Irish farms each year. FBD Insurance (Farmer Business Developments) consider that 90% of all fatal and serious farm accidents could be halted "by managing health and safety on the farm"15. This illustrates that most injuries are not an inevitable consequence of working in a dangerous environment or industry. Rather, they are the result of a lack of adherence to safety protocols set out by governing bodies, or a deficit in available safety protocols (in 2009 only 40% of farms had completed the Teagasc Farm Safety Code of Practice3). Added to this, there is a disparity between regulations in agriculture and other industries in the area of safety training. For example, construction workers are all required to hold an up to date ‘Safe Pass’ qualification in order to work on a is construction site16. This does not exist for farmers and their families. This lack of safety training standards is an area that should be examined in order to improve safety practices.

In terms of the limitations of this study, it is a single centre retrospective study with limited numbers of patients – it is possible that some cases may have been missed. Chart reviews are reliant on doctors and nurses documenting injuries and issues and these being identified by the researcher; this may lead to data loss. Nonetheless, the study serves an important function to highlight this trauma subset. In conclusion, farmers continue to work in agriculture at ages when in most sectors the norm is to retire, despite the fact that agriculture is Ireland’s most dangerous industry. When we treat these injuries in hospital, the horse, cow or bull has bolted; lack of mandatory safety training is an oversight peculiar to the agricultural industry. This is an area which should be examined by governing bodies as a matter of urgency.

Acknowledgements:
We would like to acknowledge the contribution of Dr Norman Pao and the CUH records department for their help in data collection for this study.