A lump in the Tongue

Amyloidosis is a systemic or localised disorder of protein folding in which there is extracellular accumulation of β-pleated fibrillar deposits of monoclonal immunoglobulin light chain fragments called amyloid proteins.1 Amyloid deposits can occur in any tissue, localised or diffusely. Head and neck manifestations of amyloidosis are rare. Here we describe a rare case of localised amyloid deposition in the dorsum tongue.

A 76-year-old Caucasian male presented with a one month history of a painless ‘lump in the tongue’. His medical history included ischaemic heart disease, diabetes mellitus and chronic obstructive pulmonary disease. On examination there was a well-defined firm 15mm diameter yellow submucosal mass on the right dorsum of tongue. The overlying mucosa was erythematous but not ulcerated (Fig. 1). 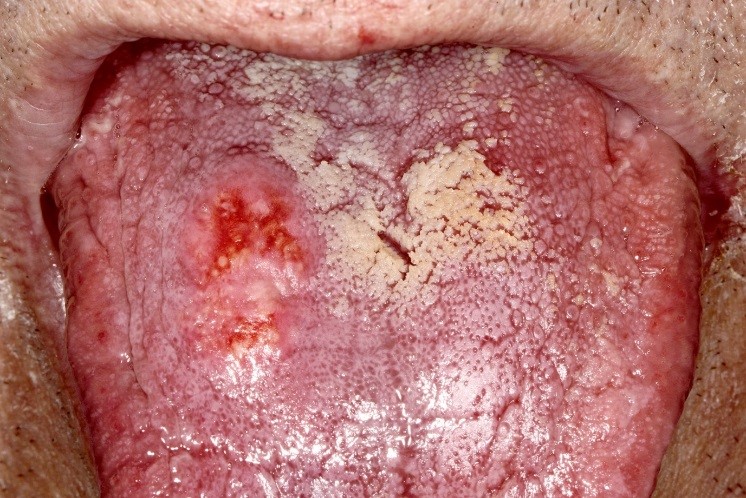 An incisional biopsy showed mucosa covered by a thin atrophic epithelium with a zone of central ulceration and light patchy superficial inflammation. Much of the underlying corium and parts of the underlying muscle were replaced by an amorphous eosinophilic deposit that stained positively with Congo red and showed green birefringence under polarized light. Immunohistochemical staining of the deposit was performed using monospecific antibodies reactive with kappa and lambda immunoglobulin light chains, serum amyloid A protein and transthyretin. Comprehensive investigations including serum amyloid P component (SAP) scintigraphy and echocardiogram found no evidence of systemic involvement.

Amyloidosis can be classified as primary, secondary or familial. The localised form occurs due to local formation and deposition of amyloid fibrils within tissues.  The following criteria for diagnosis of localised amyloidosis has been given by the National Amyloidosis Centre, London, UK: biopsy specimen showing amyloid proteins when stained with Congo red (apple-green birefringence under polarised light); absence of hepatic, renal, cardiac, and nerve involvement; no uptake of 123I-labelled serum amyloid P component (SAP) on scintigraphy to rule out visceral deposits.2

Head and neck manifestations of amyloidosis can be seen in both the localised and systemic forms of the disease. One third of patients with either AA or AL amyloidosis are reported to have oral amyloid deposits, with the tongue and larynx being the most frequently affected subsites. The tongue is considered the most common head and neck site of involvement in systemic AL amyloidosis. Typically, lesions may present as a nodule, plaque or macroglossia with the latter causing dysarthria and dysphagia. Other unusual oral manifestations of amyloidosis include xerostomia, recurrent salivary gland swelling, purpura, persistent oral ulceration and malocclusion secondary to tooth displacement.3

Mean survival of patients with the systemic forms is between 5 to 15 months. Patients with localised forms have an excellent prognosis and are not at increased risk of developing systemic involvement.4 Treatment is generally confined to local interventions and include observation, surgery if there is a functional or cosmetic disability, laser therapy, corticosteroids, radiotherapy and chemotherapy. Excision is usually curative in cases of localised amyloidosis in the head and neck, however, recurrence can occur.  Given the rarity of this disease, a high level of clinical suspicion is essential to avoid delayed diagnosis. Long-term follow-up is indicated.