A Multicentre Study of Thromboprophylaxis in Pregnancy.

Venous thromboembolism (VTE) is a leading cause of maternal mortality. The risk increases with increasing maternal age, mode of delivery and medical co-morbidities. Thromboprophylaxis with low molecular weight heparin (LMWH) has been shown to be both safe and efficacious. The aim of this study was to prospectively investigate the incidence of maternal risk factors in pregnant women admitted to hospital, to calculate their VTE risk status and to investigate if they were receiving appropriate thromboprophylaxis. All patients admitted to the participating hospitals on the day of investigation were assessed for risk of VTE on the basis of hospital chart review. Five Hundred and forty women were recruited from 16 hospitals. Almost 32% (31.7%) were receiving thromboprophylaxis with LMWH. Just under 80% of patients were on the correct thromboprophylaxis strategy as defined by the RCOG guideline but 49% were under-dosed. The odds of receiving appropriate thromboprophylaxis were significantly increased if the woman was >35 years 0or with parity>3.

Introduction
Venous thromboembolism (VTE) remains a major cause of maternal morbidity and mortality complicating one in a thousand pregnancies. In Ireland, VTE is the leading cause of direct maternal deaths. Recent evidence suggests that the introduction of widespread thromboprophylaxis may have led to a decrease in deaths from VTE. The likelihood of VTE in pregnancy is higher when additional risk factors such as a history of VTE, obesity, increased maternal age and smoking are present. The incidence of these co-morbid conditions is increasing. The potential for a multiplicative effect on overall VTE risk has been shown to be an important factor to consider when risk-stratifying pregnant women. Most risk factors appear to have a greater effect on the incidence of VTE in the postpartum period rather than in the antepartum period. Low molecular weight heparin (LMWH) has been shown to be safe and efficacious in pregnancy. When compared with unfractionated heparin, it has been shown to be associated with a lower risk of osteoporosis and heparin induced thrombocytopenia. It is recommended that a VTE risk assessment is carried out on all pregnant women and thromboprophylaxis is recommended for high risk women. However, despite thromboprophylaxis guidelines, implementation is often variable. The aim of this study was to prospectively investigate the incidence of maternal risk factors in women admitted to maternity hospitals in Ireland, to calculate their VTE risk status and to investigate if they were appropriately receiving thromboprophylaxis.

Methods
All maternity units in the Republic of Ireland were eligible for inclusion.  All 20 maternity units were contacted and 16 agreed to participate in the study.  Ethical approval was obtained from participating institutions. Any inpatient wards with obstetric patients were included. Labour wards, outpatient clinics, theatres, radiology, and emergency rooms were excluded. Data were collected from a review of hospital charts on standard case report forms by two of the authors (physicians). Each hospital was assessed on one pre-specified day to allow complete and systemic processing of patient data. For inclusion, each patient had to be an inpatient in an eligible ward on the day it was surveyed and be pregnant or have delivered during the current admission. Data abstraction from all eligible charts was completed in selected wards at each hospital on the day of hospital visitation and included patient demographics, admission diagnosis, details of pregnancy, risk factors associated with VTE (as defined in the RCOG Green Top  guideline No. 37a12) background medical issues, delivery details (if post-natal) and details of thromboprophylaxis. The study period was September 2011 to November 2012. Patients were excluded from the study if their charts were unavailable for review. Enrolled patients were assessed for risk of VTE and need for thromboprophylaxis in accordance with the RCOG guideline. When assessing whether prophylaxis was compliant with the guideline, both the type and dose of thromboprophylaxis was considered. Duration of dose was recorded if recorded in the medical chart.

Baseline characteristics
Five hundred and forty women were recruited from 16 hospitals. The mean age at booking was 31(5.7) years (Table 1). One hundred and twenty-four women (23%) were aged over thirty-five at booking. Both antenatal and postnatal women were included; 31.1%(168) of participants were antenatal. The median gestation of antenatal women was 35 (30-38) weeks  Eighty-six percent (465) of women had booking weights documented. The mean (SD) booking-weight was 71.5 (14.5) kg. Seventy-eight percent (420) of women had a booking Body Mass Index (BMI) calculated (or a height and weight documented so that a BMI could be calculated). The mean booking BMI was 26.2 (4.9) kg/m2. While 88 (16.3%) women were considered to be obese at booking, it’s important to note that 23 (4.3%) had a BMI>35kg/m2 and 6 (1.1%) had a BMI>40kg/m2. The median parity was 1 with 21.7% of woman having a parity of 3 or more. Four (0.7%) women had a personal history of VTE and 17 (3.1%) had a family history of VTE. Only 7 women had undergone thrombophillia testing; two were heterozgous for the Factor V Leiden mutation and one had antithrombin deficiency. Thirty percent (162) had an underlying medical condition that was unrelated to the pregnancy. A wide variety of conditions were noted. Asthma was the most commonly documented, affecting 5.7% (31); endocrine disorders were the next most common with 3.9% (21) having hypothyroidism, 2% (11) having hyperthyroidism and 3.5% (19) having impaired glucose tolerance or diabetes mellitus. Two women had a history of cancer (breast), three had a history of intravenous drug abuse and one had nephrotic syndrome. Eleven women had varicose veins. Almost one in five women were actively smoking at some stage during the pregnancy. Nineteen of the pregnancies (3.5%) were multiple (all twin) and eleven (2%) were the result of assisted reproductive therapies. No woman had undertaken long-haul travel during her pregnancy. 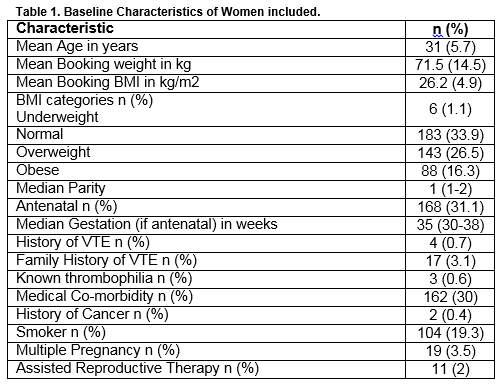 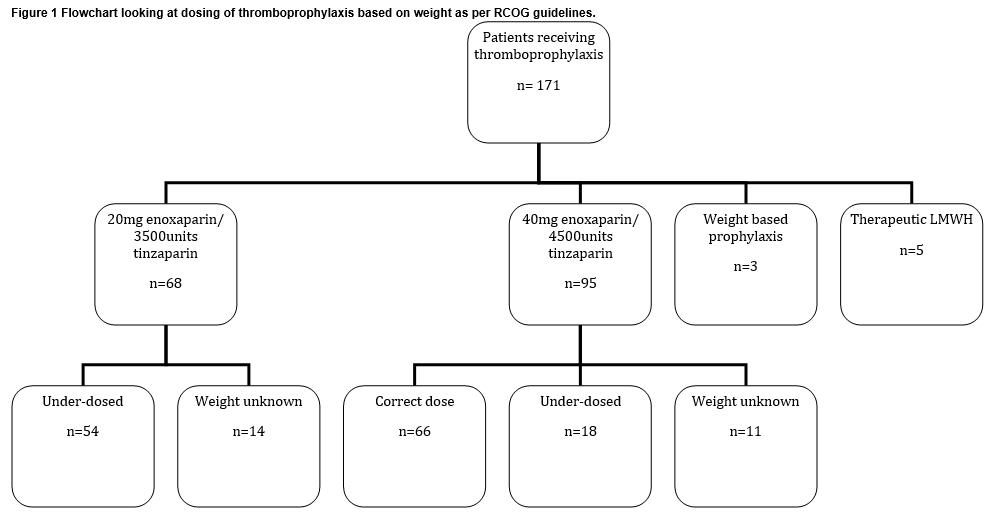 Different types of maternity units were involved in this study including large obstetric units with formal obstetric haematology services, stand alone maternity hospitals and smaller obstetric units attached to general hospitals. When centres with formal obstetrichaematology services were compared to other units, it was found that they were similar in terms of patient risk profiles (p=0.164) and in terms of thromboprophylaxis use (p=0.248). Overall, 73.9% of patients were on the correct thromboprophylaxis strategy as defined by the RCOG guideline.  The odds of receiving appropriate thromboprophylaxis were significantly increased if the woman was aged 35 or over (OR 2.311; 95%CI 1.415-3.775;p=0.001) or if parity was greater than 3 (OR1.775; 95%CI1.078-2.923;p=0.024) but not if BMI >30 (p=0.827) orpatients had a history of VTE (p=0.999). 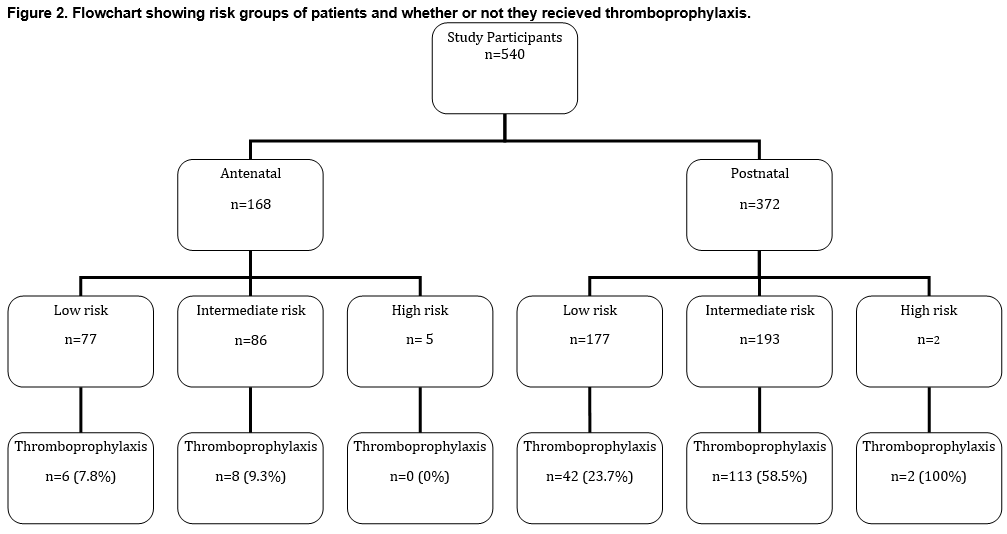 Discussion
Twenty-six percent of patients in this study were not on an appropriate thromboprophylactic regimen, according to RCOG guidelines. This included 5 antenatal women who were considered high risk and 80 postnatal women who were considered intermediate risk but were not on pharmacological  thromboprophylaxis. Of those women that received thromboprophylaxis, almost two-thirds had no documented thromboprophylaxis plan in their notes. Obstetric units are busy with a high turnover of pregnant women so if thromboprophylaxis is commenced, a plan regarding drug, dose and duration should be documented to ensure that women recieve optimal care. Almost half the women who recieved thromboprophylaxis were on too low a dose. A wide variety of obstetric units were looked at in this study (range of inpatients per unit: 11-105) which reflects current obstetric practice in Ireland. The mean age at booking was 31 with almost a quarter of women aged over 35. Women aged over 35 are at an increased risk of pregnancy related morbidity17,18. It is a concerning trend that they are forming a large proportion of obstetric cohorts given their high-risk nature. The mean BMI was 26.2kg/m2 with 55% of patients being overweight or obese at booking. Worryingly, 22% of patients did not have a BMI (or height and weight) documented at booking. Increased BMI is associated with pregnancy and neonatal morbidity19. It should be identified as an issue as early as possible so that remedial action can be instigated. In the context of this study, as BMI forms part of both the antenatal and postnatal risk assessment, patients may have been considered low risk when in fact they were intermediate risk and may explain why some low risk patients received thromboprophylaxis.

Few patients had a personal or family history of VTE. Almost one third had an underlying medical condition which could impact the pregnancy. Almost one in five women were actively smoking at some stage during the pregnancy. This is despite the fact that it has long been recognised as being harmful in pregnancy20. Moreover, there have been several campaigns, both local and national, highlighting the dangers of smoking in pregnancy and resources dedicated to smoking cessation21. Since this study, a clinical practice guideline for venous thromboprophylaxis in pregnancy22 has been published by the Institute of Obstetricians and Gynaecologists, Royal College of Physicians of Ireland and the Irish Haematology Society in 2013. It is hoped that this will lead to a simplified risk assessment of pregnant women and improve appropriate use of thromboprophylaxis.  Following implementation of this guideline, we plan to repeat this study.