There is international consensus that smoking cessation in the first half of pregnancy improves foetal outcomes. We surveyed all 19 maternity units nationally about their antenatal smoking cessation practices. All units recorded details on maternal smoking at the first antenatal visit. Only one unit validated the self-reported smoking status of pregnant women using a carbon monoxide breath test. Twelve units (63%) recorded timing of smoking cessation. In all units women who reported smoking were given verbal cessation advice. This was supported by written advice in 12 units (63%), but only six units (32%) had all midwives trained to provide this advice. Only five units (26%) reported routinely revisiting smoking status later in pregnancy. Although smoking is an important modifiable risk factor for adverse pregnancy outcomes, smoking cessation services are inadequate in the Irish maternity services and there are variations in practices between hospitals.

Introduction
Maternal smoking is an important modifiable risk factor for adverse pregnancy outcomes. It is associated with an increased risk of miscarriage, preterm delivery, placental abruption, low birth weight and stillbirth1-3. Furthermore, maternal smoking increases the risk of sudden infant death syndrome (SIDS) in the postnatal period4. Despite these negative consequences, 11% of Irish women continue to smoke during pregnancy5. Smoking cessation early in pregnancy can reduce the increased risk of low birth weight, preterm birth and small for gestational age to levels similar to that of non-smokers6-8. Tobacco Free Ireland, Ireland’s national tobacco control policy document, recommended in 2013 that we ‘undertake targeted approaches for specific groups, particularly… pregnant and post-partum women’9. More recently, Ireland’s first National Maternity Strategy in January 2016 recommended that all maternity units have tobacco-free campuses, an onsite smoking cessation service available and that midwives and other frontline healthcare professionals are trained in smoking cessation10. There is no information available currently on whether these recommendations are being implemented. The purpose of this national audit was, firstly, to identify information recorded during antenatal appointments on maternal smoking. Secondly, we examined the extent of smoking cessation support and services that are available for women who report they are continuing to smoke when they attend for their first antenatal visit.

Methods
In the absence of a validated questionnaire, a survey was designed to examine the maternal smoking information collected at the first antenatal appointment and to investigate the smoking cessation support and services available during pregnancy. Data were collected between March and July 2016 from all 19 maternity units in the Republic of Ireland. Under the auspices of the HSE Director of the Clinical Programme in Obstetrics and Gynaecology (MJT), contact details were obtained for the antenatal midwifery department in all units. The telephone survey was conducted by a single researcher to limit intra-observer bias. Eligibility criteria for midwives to complete the survey included their involvement in the recording of women’s medical and sociodemographic histories at first antenatal appointment. These midwives are typically one of the first healthcare professionals (HCP) to collect current smoking status from women in pregnancy and, therefore, the first HCP with the opportunity to deliver smoking cessation advice. Sixteen maternity units responded immediately through the telephone survey. Timing for a telephone conversation was unsuitable for four units. Two surveys were completed over the telephone at a later date and two were sent to the antenatal Department and were reported back to the researcher.

For the purposes of this study onsite smoking cessation services refer to those that are within the hospital the women are attending for antenatal care. Offsite smoking cessation services refer to those that are ran at a location other than the hospital i.e. HSE Smoking Cessation Support Services in primary care clinics. The results of the audit were anonymised and inputted to an Excel© (Microsoft Corp., Redmond, WA, USA) spreadsheet before being exported to the statistical software program SPSS version 20.0.0 for statistical analysis (IBM Corp., Armonk, NY, USA). Descriptive statistics were the sole method of data analysis.

Results
Smoking related information collected by midwives at the first antenatal appointment is presented in Table 1. All 19 units recorded women’s current smoking status at first antenatal visit. However, only one unit validated the self-reported smoking status of women using a carbon monoxide breath test. Of all units, 68% (n=13) recorded whether women reported previous smoking, with 63% (n=12) also recording when smoking cessation occurred. The self-reported number of cigarettes smoked per day was recorded by 95% (n=18) of units, whilst validation of smoking status took place in just one unit using a carbon monoxide breath test.

Table 2 shows the smoking cessation advice provided to women at first antenatal appointment. Of the 19 units, 84% (n=16) asked women if they wished to quit smoking during pregnancy. All units provided information on smoking cessation in pregnancy, which was delivered by the midwives at first antenatal appointment. All maternity units gave verbal advice, 63% (n=12) of which accompanied this advice with written support in the form of a leaflet. Verbal advice was given by the midwives, the length of which ranged from 10 seconds to 15 minutes. Although advice was given in all 19 units, only 32% (n=6) had all midwives trained to deliver smoking cessation advice. 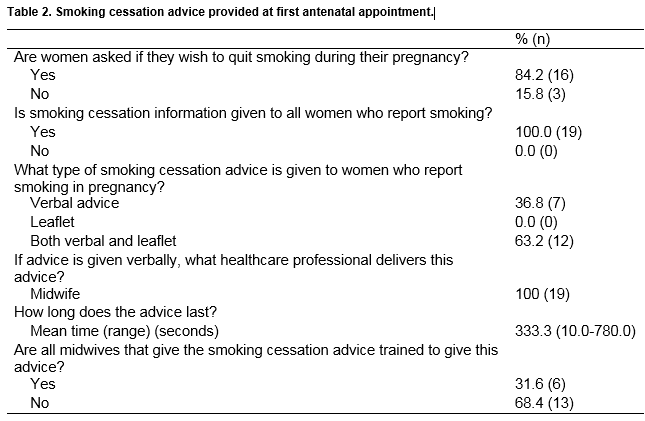 Table 3 shows that smoking status was routinely revisited in only 26% (n=5) of units; 16% (n=3) never revisited the topic whereas 58% (n=11) reported that this may be checked later in pregnancy, although this was at the discretion of each HCP, for example, following the diagnosis of intrauterine foetal growth restriction. 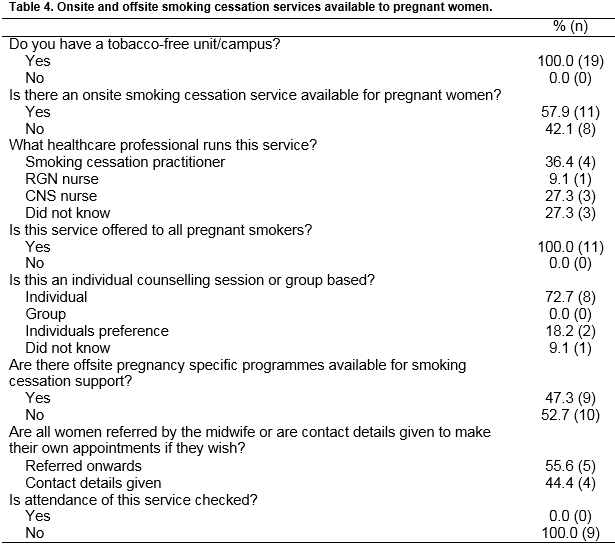 Discussion
This national audit of all maternity units found that smoking cessation services are inadequate in the Irish maternity services, and that there are wide variations in practices between hospitals. While all units collect data on maternal smoking at the first antenatal visit, there were differences in the details collected. We also found that smoking cessation services were inadequate compared to both national and international recommendations. As clinical improvements in neonatal outcomes can be achieved if women successfully stop smoking in the first half of pregnancy, improved support services should be prioritised7.

A strength of this national audit is it is the first of its kind to be conducted in all Irish maternity units, therefore, providing a novel insight to the current services and support available to pregnant smokers. The sample is nationally representative as it included all 19 maternity units. A limitation of this study is that the responses from midwives surveyed were self-reported, which may introduce a level of bias. However, it is unlikely that respondents would exaggerate the deficiencies in the services provided. Secondly, the survey included midwives only and therefore a wider stakeholder consultation is necessary to capture a more complete picture of the existing cessation services, particularly in primary care. The World Health Organization (WHO) has made similar recommendations for the prevention and management of tobacco use and second-hand smoke exposure in pregnancy that are also not being met11. The WHO recommends that all ‘health-care providers should routinely offer advice and psychosocial interventions for tobacco cessation to all pregnant women, who are either current tobacco users or recent tobacco quitters…ask all pregnant women about their tobacco use (past and present) and exposure to second hand smoke as early as possible in the pregnancy and at every antenatal care visit.’ In our audit “recently quit” smokers were not being identified and did not receive the advice or support they require to maintain abstinence. Healthcare professionals were not revisiting smoking habits at subsequent antenatal visits. Collection of smoking status and cessation advice was often explored only at the first antenatal visit.

Almost all maternity units in Ireland currently rely on self-reported smoking status. In Scotland, carbon monoxide testing is now routinely offered at first antenatal appointment, but this is only practiced by one maternity unit in Ireland12. The potential value of this approach is demonstrated by validation of smoking status being able to identify up to 25% more women who smoking during pregnancy, and thus direct them to the support that they need to reduce or quit smoking13. Currently in Ireland 63% of units document when smoking cessation occurred in ex-smokers. Research has shown that approximately 17% of pregnant women who quit smoking before their first antenatal visit relapse by the end of pregnancy, but when individual relapse prevention counselling is provided, the rates of relapse almost half14. If information on smoking status is sought again, it may only occur if there is a complication such as foetal growth restriction, which may have been prevented had the woman received the appropriate support6. Rechecking smoking habits throughout pregnancy and reinforcing smoking cessation advice as late as the third trimester can improve pregnancy outcomes such as birth weight15.

The lack of follow-up on smoking status in Irish maternity units suggests that there is a lack of emphasis on the importance of smoking cessation, a fact also apparent by the often short amount of time allocated to smoking cessation advice at first prenatal visit. Effective cessation counselling requires 5 to 15 minutes of advice provided by a trained individual that is delivered alongside the provision of pregnancy specific, self-help materials16. Our study found that very few maternity units had all midwives trained to deliver smoking cessation advice, many spend less than the minimum of 5 minutes on advice, and more than a third did not provide written material to support the counselling. There are also wide variations in the length of time spent in initial individual smoking cessation sessions outside pregnancy in Ireland17.

The HSE Tobacco Free Campus Policy recommended that in light of the European Network for Tobacco Free Health Care Services standards ‘The healthcare organisation ensures appropriate education and training for clinical and non-clinical staff’18. However, similar to our results another study found that only one third HCPs had received training to deliver smoking cessation advice although 98% of them believed it was their responsibility to advise patients19. Online support in the form of an evidence based website has the potential to offer ongoing pregnancy specific advice on smoking cessation. This could provide a cost- and time effective, safe way to provide education and support to maternal smokers given the high internet use in pregnant women20. Regardless of the platform, extra time must be spent on delivering smoking cessation advice. Informing and advising women at the start of pregnancy has the potential to ease staff burden due to less antenatal hospitalisation, less NICU admissions and shorter length of stay in NICU if cessation is successful21,22. Additionally, it could decrease the financial strain that maternal smoking places on the healthcare system. An infant born prematurely and with low birthweight is estimated to cost the healthcare system €2,450 per day depending on the level of care23.

Access is an important determinant of attendance at outpatient clinics24. Many hospitals give contact details of smoking cessation services to attend but not a specific appointment. This reduces the likelihood of women attending the clinic by almost half25. On a positive note however, all maternity unit/hospitals were reported tobacco-free as per the HSE Tobacco Control Frameworks aim that all HSE campuses would be tobacco-free by 201518.

We recommend that smoking cessation services are implemented in all maternity units in a standardised way. All units should ensure women are screened for smoking using a carbon monoxide breath test so that the opportunity for support is not missed. Women who recently quit smoking should also be identified as they too require support. We also recommend all midwives and other HCPs receive training in smoking cessation counselling.

Declaration of Conflict of Interest
The authors declare no competing interests.