A Prospective Analysis of the Relationship between Chronic Diseases and Adiposity in older adults: Findings from the Lifeways Cross-Generation Cohort Study of a Thousand Families 2001-2014

This study assesses the relationship between body mass index (BMI) and adult chronic diseases (diabetes mellitus type 2 [DM2], cardiovascular diseases [CVD] and cancers), in grandparents in the Lifeways Cross-Generation Cohort Study. BMI was either measured or reported, at baseline or 10-year follow-up, in 1,244 grandparents. Cumulative morbidity data were recorded at baseline, 3 and 10-year follow-up through questionnaires, General Practice note search, or both. Just over 42% of grandparents were overweight and 32.1% obese. In the multivariate analysis BMI showed a strong linear association with both DM2 (ptrend<0.001) and CVD (ptrend<0.001). There were no significant associations with cancers, but case numbers were small. Results were similar for waist circumference. This prospective study presents novel Irish data and confirms other recent Irish cross-sectional reports on adiposity and adult chronic disease, highlighting the need for effective health promotion interventions in older adults

While the prevalence of obesity has begun to stabilise in some countries in the adult population, Ireland has demonstrated one of the highest increases in prevalence in the last decade1. According to the 2011 National Adult Nutrition Survey,2 the most dramatic increase in obesity among Irish adults was observed in 51-64 year old men, rising from 11% to 42% over the past two decades. SLÁN 20073 reported men aged 45+ were more likely to be classified as overweight than women, 49% vs. 39% respectively. The latest report  on the Irish Longitudinal Study on Ageing, TILDA, highlights that 35% of older Irish adults are classified as obese according to their body mass index (BMI) and a further 44% are overweight4. The report also highlights that just over half of older Irish adults are at a substantially increased risk of metabolic and cardiovascular diseases (CVD) based on their waist circumference (WC)4. The aim of this study was to examine the relationships between anthropometric parameters (BMI, WC), and selected chronic diseases (DM2, CVD and cancers), employing data from the prospective Lifeways study. Previous reports have been cross-sectional only; this is novel in that it appears to be the first longitudinal analysis of the association between measures of adiposity and chronic disease outcomes in Ireland.

The Lifeways Cross-Generation Cohort Study, which was established during 2001–2003 through two Irish maternity hospitals, is a unique Irish longitudinal database. A randomly selected sample of 1,124 expectant Irish-born mothers was recruited while they were attending their first ante-natal visit. The index mothers in the Lifeways study were found to be representative of the general Irish female population5. At recruitment all mothers were asked if, in addition to their infant and partner, they would attempt to recruit to the project at least one available living grandparent. Where more than one grandparent was available, selection was rotated at random from maternal grandmother, paternal grandmother, maternal grandfather and paternal grandfather. The grandparents’ consent was obtained by sending an information letter and a consent form. Consent was also sought for a clinical examination during a home visit. Longitudinal follow-up is on-going in 2015. Detailed design of this study has been previously described6,7.

The data used in this study was provided by 1,244 grandparents (from 632 families), aged 37-90 years who participated in the study. BMI was either measured or reported at baseline or measured only at 10-year follow-up, with priority given to measured variables. Cumulative morbidity data were recorded at enrolment by questionnaire and a physical examination7,8. Three and 10-year follow-up data was collected through questionnaires, General Practice note search, or both. A physical examination was also undertaken at 10 years. The cumulative data used in this study gives information on grandparent’s health status and adiposity measures as of beginning of 2014. A diagnosis of CVD included CVD risk factors, i.e. hypertension, angina, high cholesterol, myocardial infarction and stroke. BMI was computed as weight in kilograms over height in meters squared (kg/m2). WC was measured in cm. Based on BMI cut-off points recommended by the World Health Organization (WHO)9, the grandparents were classified into three categories: low/normal-weight (BMI <24.9 kg/ m2), overweight (BMI 25–29.9 kg/ m2) and obese (BMI ≥30 kg/ m2). For WC three health-risk categories were used9: low risk (women <79.9 cm, men <93.9 cm), increased risk (women 80-87.9 cm, men 94-101.9 cm) and high risk (women ≥88.0 cm, men ≥102 cm). Only grandparents with complete data on age, sex, and BMI are included in the current analysis.

Numbers of grandparents differ for different analyses due to missing values for covariates.

Univariate analyses were conducted using chi-square tests (or Fisher’s exact test if assumptions were not met), to assess whether there was a difference between the prevalence of the various chronic diseases, and BMI (n=1,244) and WC (n=1,055). Odds Ratios (ORs) and 95% confidence intervals (95% CIs), were estimated by logistic regression analysis for BMI (n=1,176) and WC (n=988) and adjusted for age and sex in model 1 and age, sex and education level in model 2. All analyses were conducted for both sexes combined and separately. Finally, we examined whether the BMI source (self-reported vs. measured) influenced our results. All analyses were performed using the STATA statistical software package (version 13). All p-values were based on two-sided tests and considered statistically significant if <0.05. 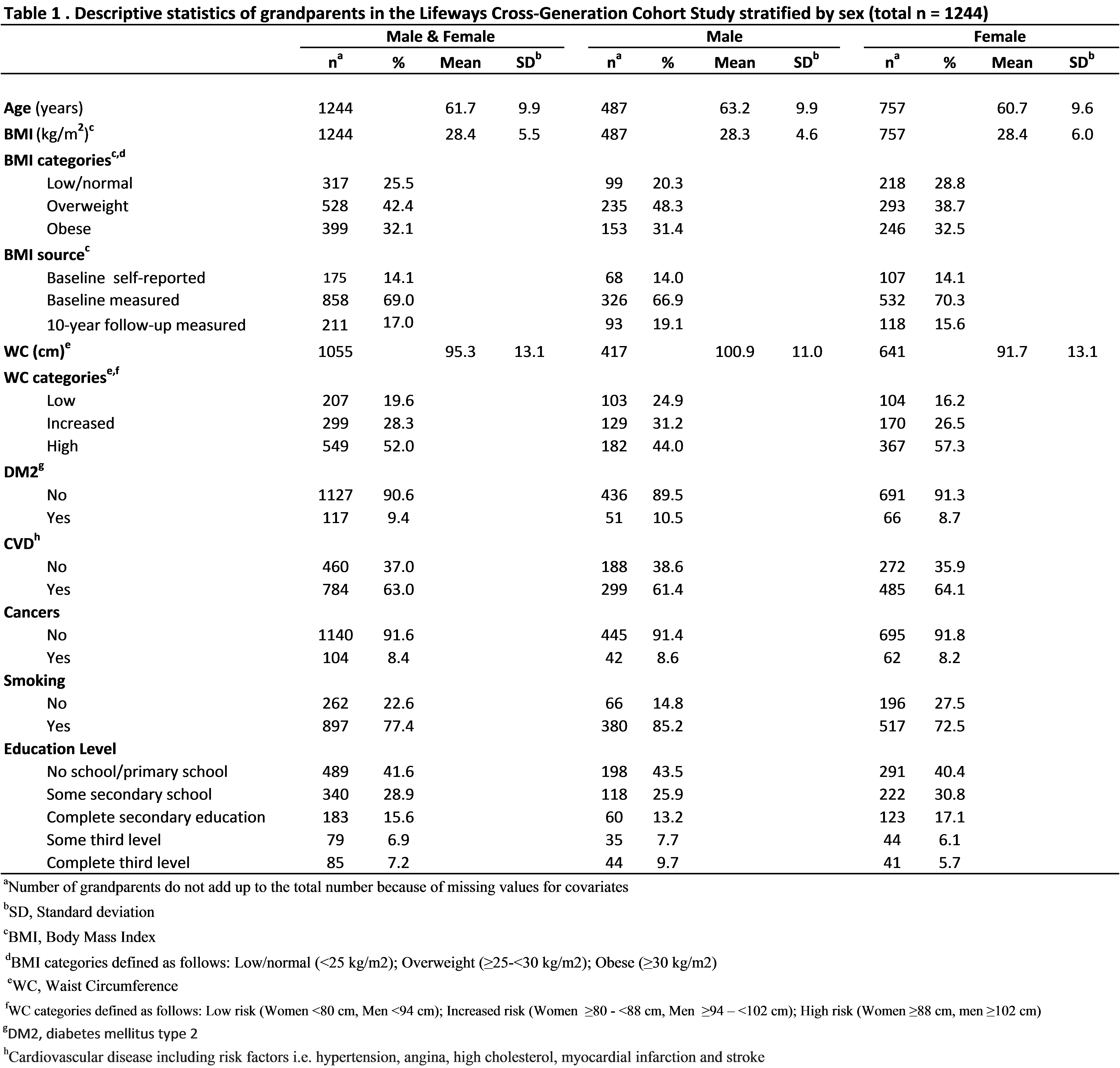 Table 1 presents a summary of the descriptive characteristics of the 1,244 included grandparents. BMI far exceed normal-weight categories9 with 42.4% overweight and 32.1% obese. Furthermore, measurements of central adiposity found that 52.0% of the grandparents had a WC in the ‘high risk’ and 28.3% in the ‘increased risk’ category. Table 2 shows the results of univariate analyses between BMI and chronic diseases. Significant differences between BMI and DM2 and CVD were observed (p<0.001) for men and women combined, with more grandparents being overweight and/or obese when diagnosed with DM2 or CVD compared to grandparents not diagnosed with these diseases. Similar patterns were observed for analyses stratified by sex (Table 2). BMI was not significantly associated with cancers (p>0.05). When this analysis was restricted to those 1158 respondents with BMI at baseline the findings were very similar , with DM2 and CVD outcomes being strongly significantly associated with BMI patterns (each <0.001) but not cancers. Next, the differences between WC and chronic diseases in grandparents were examined in univariate analyses (Table 3), showing similar patterns as for BMI. 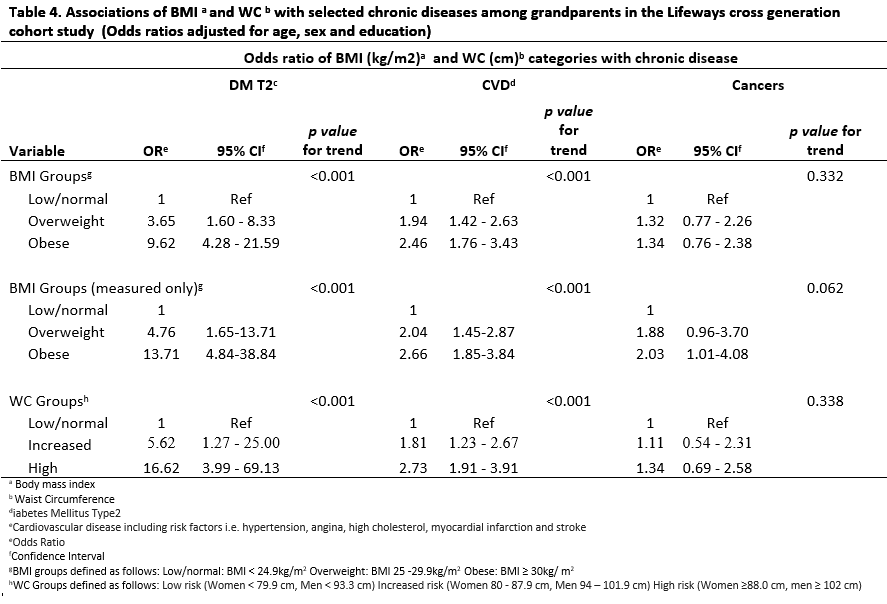 Table 4 shows the logistic regression models assessing the associations of BMI and WC with selected diseases. DM2 risk increased significantly and linearly with increasing BMI when adjusted for age and sex (model 1; ptrend<0.001). Compared to normal-weight grandparents, overweight grandparents had a 3.5 times higher risk of being diagnosed with DM2; this was even ten-fold for obese grandparents. Adjusting additionally for education level (model 2) showed similar results. Similar patterns were observed for WC. Also for CVD, risks increased significantly and linearly with increasing BMI or WC category, although the increase was less sharp compared to DM2. For cancers, no significant association was observed with either BMI or WC. When this analysis was restricted to those with BMI at baseline findings were similar (data not shown). We also examined the relationship with BMI source (self-reported vs. measured; data not shown), which was found to be significant in women only (p<0.001). A higher percentage of women with measured BMI were categorised as overweight or obese vs. women with self-reported BMI (74.5% vs. 51.4%, respectively). When restricting the analyses to measured BMI only (n=1,001; Table 4), results were similar for DM2 and CVD to the overall results. For cancers, a significantly increased risk was observed for obese grandparents but not for overweight grandparents compared to normal-weight grandparents. Similar results were observed when restricting the analyses to those with BMI at baseline.

The current study shows high rates of overweight and obesity but furthermore, we found a clear linear relationship between adiposity and diagnosed DM2 and CVD during the study follow-up period.  These data are prospective, showing clearly in an Irish context that overweight and obesity translate into adult morbidity, especially for cardiovascular diseases. When the analyses were restricted to those with BMI only at baseline the findings were very similar. It is likely that this is because body mass index patterns, which are known to track strongly in adulthood were established in these respondents,10 though we do not address this repeat measures question directly in this analysis. Lack of a statistically significant association between adiposity and cancers in men and women in the overall analyses most probably reflects the relatively small number of study grandparents with this condition (n=142). Another possible explanation may be the inclusion of ‘all cancers’, many of which are not associated with adiposity. Whilst grandparents in this study were more likely at baseline to report co-morbidities than the SLÁN population8, their prevalence rates of overweight/obesity are similar to those reported in other surveys3,4. In older adults, obesity can be diagnosed easily and inexpensively using anthropometric measures. Clinical guidelines have suggested in the past that both BMI and WC should be considered when assessing a patient's risk of adiposity-related disease9,11, and findings from this study support this. However, the relation between measures of general and central adiposity and clinical endpoints remains understudied in older adults and more research is needed in this area12,13.

Analysis of the source of BMI data revealed interesting results. Significant differences were found in proportions of BMI measurements in women in the overweight/obese category in the ‘measured’ vs. ‘self-reported’ groups. These differences indicate a possible underestimation of the true prevalence of obesity in women when using self-reported data. A study analysing data from three SLÁN surveys in Ireland reports similar findings14. Based on self-reported values among persons 70 years and older it is estimated that there is a 14-27% underestimation of people who are overweight15. In addition, the results of the multivariate analyses on cancers in the current study became stronger when restricting to measured BMI only. The implications for practice are clear: BMI determined from self-reported variables is less reliable in to monitoring obesity trends in populations14. The major strengths of this study are its prospective design, its relatively large size and availability of exposure information and endpoints which have been carefully reviewed and repeatedly updated. Follow-up rates in this study have been very high. Inclusion of the grandparents in the Lifeways Study is of considerable importance in developing our understanding of how risk for chronic disease is transmitted across generations and through the life course of individuals. An ageing population and the increasing prevalence of adiposity will create a significant burden of morbidity with major resource implications, unless measures are taken to stem the obesity epidemic16. Epidemiologic studies examining the relationship between body weight and risk of morbidity and mortality in older adults have many methodological challenges17,18. The most important of these is the problem of reverse causation, in which weight loss resulting from illness can distort the relationship between leanness and health18. Of the chronic diseases examined in the current study, only pre-existing cancer might have resulted in weight loss in our population. However, as >80% of cancer cases were diagnosed after BMI or WC was measured, this will most probably not have affected our results. Other variables included that were not found to be significant confounders in this analysis were child’s birth weight, accommodation and smoking. However, we cannot exclude the possibility of residual confounding by unmeasured variables. The cohort in this study was composed predominately of indigenous white Irish individuals and the application of these findings to other racial and ethnic groups is unclear.

This prospective study presents novel Irish data which confirm other recent Irish cross-sectional reports on adiposity and adult chronic disease. Furthermore, there are health concerns for older adults in Ireland because of a high prevalence of overweight and obesity and our growing and ageing population. Tackling the high rates of overweight and obesity must be a priority for public health intervention.

The grandparents who consented to contribute to this study; the research nurses and the administrative staff at UCHG and the Coombe Women’s Hospital, Dublin for data linkage support on Euro King; and the families’ GPs for their voluntary cooperation.

The Health Research Board and the Department of Health and Children’s Health Promotion Policy Unit.

4 'The Over 50s in a Changing Ireland: Economic Circumstances, Health and Well-Being'. The Irish Longitudinal Study on Ageing. Trinity College Dublin. 2014.